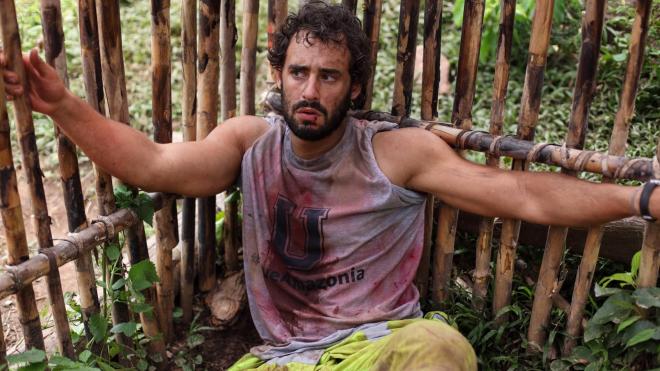 The Green Inferno makes its second appearance on Blu-ray courtesy of Scream Factory in a Collector’s Edition. Director Eli Roth’s love letter to Italian cannibal films won’t win over seasoned exploitation fans, but gorehounds who enjoy a bloody good time will delight in this modern take on the cult subgenre. Scream Factory carries over an excellent A/V package from a previous release but adds a host of new special features making this edition worth picking up. Recommended.

“What keeps you up at night?”

Columbia University student Justine is a naive freshman who, after attending a lecture on female genital mutilation, wants to make a difference in the world using her father’s ties at the U.N. Student activist Jonah (Aaron Burns) hears this and wants to recruit her for his protest group. Drawn by the confident swagger of the group’s leader Alejandro (Ariel Levy), Justine proves she is more than just talk. She joins the group on a mission to Peru to protect a group of indigenous people from an oil corporation’s bulldozers. The protest is a success thanks to the group live streaming the rainforest decimation halting the machines and military guards. Returning home, the group celebrates their victory until the plane’s engines catch fire sending the aircraft crashing into the dense rainforest jungle. Those who survive are met by the same native tribe they swore to protect. Led back to their village the activists see the grisly remains of those outsiders who previously met with the tribe. How can these innocent college kids hope to survive The Green Inferno?

From the start, The Green Inferno slathers on a messy foreboding tone over everything leaving you with an insatiable desire to see everyone get eaten by cannibals. The agonizing developments needed to get the helpless victims, er I mean, activists to the Peruvian jungle takes a while but I argue it’s worth it to see the students meet their gruesome ends. Historically, Roth hasn’t excelled at creating fully realized characters, but at least in all of his films those who deserve to die do so in an entertaining manner. Here things are no different. Now, don’t get me wrong! I fully expected a film honoring Cannibal Holocaust to provide plenty of annoying fodder, er I mean disposable characters meant to amplify the scenes of bloody dismemberment.

Unfortunately, Roth betrays the dangerous, gritty elements that made those old movies so desirable and infamous. Instead, you get a well-made mainstream homage that performs like any other DTV zombie flick. Thankfully Lorenza Izzo is a decent lead helping to keep this thing rolling. Her determination to keep Justine grounded and vulnerable while pushing her through some nasty scenes raises the stakes of the film immensely. Supporting cast members turn in solid performances as well. Special recognition goes to the local actors portraying the cannibal tribe. Antonieta Pari as the Village Elder and Ramon Ralo as the Bald Headhunter lead the enormous group of dedicated actors lending more enthusiasm and depth to the film than it deserves.

Where The Green Inferno succeeds is in some bloody good practical effects work from the legendary Greg Nicotero. From the simple slice and dice moments to the larger set pieces with limbs, heads, and arterial blood spray filling the screen you won’t be disappointed with the attention to detail here. The biggest misstep for the film? The first cannibal sacrifice is a gruesome, brutal experience that is never topped. While I admire the choice to hook the audience early with eyeballs, tongues, and limbs flying around it only sets up the film for diminished returns with subsequent kills. From then on every death scene is peppered with humor or empty stakes to pad the lack of violent dissection by bloodthirsty cannibals. I’m looking at you “explosive diarrhea” scene.

After 30 years, The Green Inferno brought cannibal movies back into the fray alleviating the strain of countless zombie productions. Offering this as a tribute to the godfather of cannibal films Ruggero Deodato, Eli Roth cements his love for those horrific movies filled with a sense of danger and sadistic cruelty. Audiences serious about watching this film will either be disappointed or inspired to seek out titles from filmmakers like Umberto Lenzi, Sergio Martino, and Joe D’Amato. Remember kids, it ain’t a great cannibal film unless you had to prove to the Police that you didn’t actually kill people in your movie. Good Night!

The Green Inferno arrives on Blu-ray for a second helping thanks to Scream Factory. A BD50 disc and a CD soundtrack disc are housed in a standard side-by-side keepcase with reversible artwork. The disc loads to the Scream Factory logo before landing on the static Main Menu screen with typical navigation options.

Scream Factory carries over the excellent 2.40:1 1080p transfer from the 2016 Universal Studios Blu-ray release. Image transfer is bright with plenty of fine detail from facial textures to the jungle canopy in the opening shots of Peru. Black levels are solid with dark costume elements and shadows carrying a mostly inky tone with an occasional purple-ish black hue showing up. The image quality is excellent with loads of natural light emphasizing the deep red hues of our cannibal’s skin and the neon jumpsuits of the activists. Unfortunately, brief moments of noise and blurring pop up during the plane crash scenes and a few nighttime scenes as well. I love the product of a digital image for sure, but I’m missing the gritty aesthetic I wanted to see in a film like The Green Inferno.

The Green Inferno sounds the dinner bell in both DTS-HD MA 5.1 lossless and 2.0 options.

The 5.1 DTS audio mix is energetic with loads of atmospherics pouring through the surrounds and front channels. Unlike the film, the audio mix never plateaus but keeps building with intensity until the credits roll. Layers within the sound mix resound confidently whether its crowded moments in lecture halls or cannibal slaughterhouses everyone is heard within the chaos. Dialogue is clear and clean presented strongly through the center channel. Scoring elements resonate nicely with heavy rhythmic sections filling the soundfield with the LFE channel utilized fully without distortion.

If you dig the score check out the included CD soundtrack.

This is where the Scream Factory release of The Green Inferno really sings. An amazing collection of supplements making the experience for fans even better. I recommend the featurette Into the Green Inferno as your starting point.

The Green Inferno has the best of intentions but comes up short thanks to lackluster characters and pacing issues, never achieving that nasty sense of danger you get from the best exploitation flicks. Still, Eli Roth has made a great cannibal homage that displays his love for the genre and its creators. Scream Factory’s Blu-ray has a brilliant A/V presentation and tons of special features making this HD release a no-brainer for those interested. Trade in that old 2016 bare bones Universal Blu-ray and upgrade to this one! Recommended for Eli Roth fans, millennial gorehounds, or those interested in trying out something that doesn’t feature the undead.

Sale Price 22.99
List Price 29.99
Buy Now
3rd Party 21.61
In Stock.
See what people are saying about this story or others
See Comments in Forum
Previous Next
Pre-Orders
Tomorrow's latest releases