Escape Room follows a group of people who are invited to take part in an elaborate Escape Room. They all soon find out the obstacles and consequences are real and deadly. The film draws a ton of inspiration from many other films and adds them all into one package, which is sometimes not a great thing. Still, it's entertaining and fun. There is a great 1080p HD transfer with bold color palettes and sharp detail, along with an amazing lossless DTS-HD MA 5.1 audio mix. There are a few decent bonus features as well. Worth A Look. 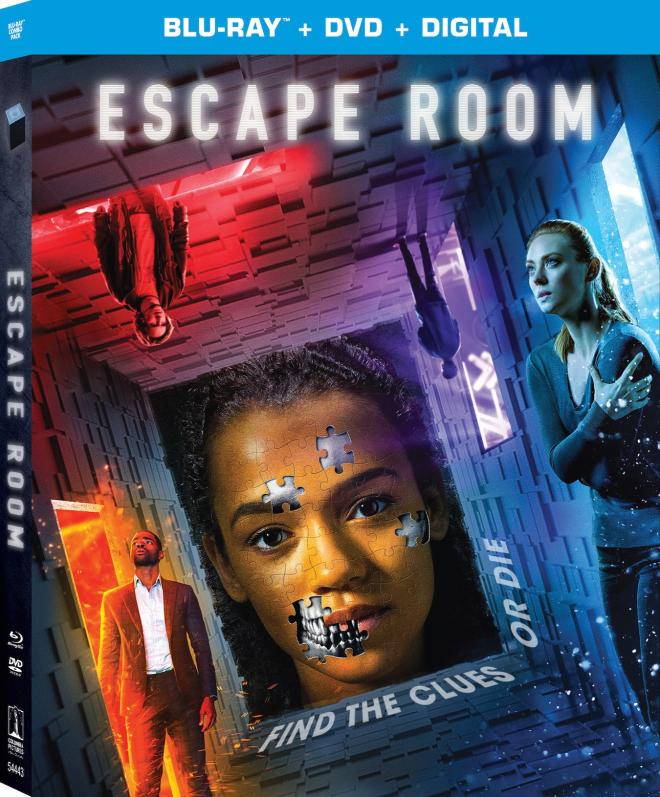 Over the past several years, there has been an increasing number of Escape Rooms that have popped up over the country, where people pay good money to be trapped in a room or rooms with others and solve puzzles to get out. Some themed escape rooms even include zombies, military, and even The Purge elements. They can be good team-building exercises and a lot of fun. However, it was just a matter of time before Hollywood took the escape room fun and turned it into a horror film.

Taking its cues from films like Saw and Cube, Escape Room takes a group of people who unknowingly share a similar secret and past. Each person has a different a unique personality trait -- the cocky character, the quiet one, the smart one, the army character, the funny one, and even the one who has done over 50 escape rooms. These strangers are invited to an escape room with the option of winning money if they finish. Once everyone is in the first room, things quickly go downhill with sadistic and violent and deadly puzzle traps. It becomes a game of survival and escape, as the players navigate each room.

As the film goes on, we see flashbacks to each character and their past that gives us a glimpse as to why they were chosen to attend this escape room. The film is a short 90 minutes long and wastes no time jumping into the chaos, which is nice. With its fast pace, there isn't a whole lot of time for character development other than some stereotypes, but that's fine with this film and the story it's trying to tell. There is a supposed twist ending, however, it's borrowed from a number of other films so you won't be shocked.

Performances are all solid enough, but again, with this type of film, you're not looking for award-worthy acting. That being said, everyone turns in good methods of anger, being frightened, and courage, even if some of the decisions they make aren't realistic. The filmmakers and studio obviously want to make this a franchise film, as they have opened it up for sequels, and the fact that this first film cost less than $10 million and ended up making $160 million at the box office.

It's an entertaining movie, for sure, that gets right to the point and looks good visually. The film is PG-13, which means there isn't a lot of gore and hardly any cursing, but interestingly enough, there didn't need to be any of it to make it succeed. Escape Room won't blow you away by any means, but you'll probably have fun with it.

Escape Room comes with a 1080p HD Blu-ray Disc and a DVD copy of the film. Both discs are housed in a hard, blue plastic case with a cardboard sleeve. There is an insert for the digital download codes as well.

Escape Room comes with a 1080p HD transfer and is presented in 2.40:1 aspect ratio. This is great looking digital video presentation from Sony Pictures that has a wealth of color, style, and detail. There are basically two types of color palettes in the film, one being an icy cool theme of grays, blues, and silvers, and the other being a much warmer setting, rife with primary colors. When the group is in the first room, the heaters and lights come on with reds, oranges, and yellows brightening the screen and making every prop and person look these fiery colors. Then the group is in an icy cool exterior setting with ice, snow, and a frozen lake, which has all the aspects of a much cooler color palette.

When inside the upside-down billiard room, the neon bar signs accentuate the green pool tables and dark wood floors nicely. Black levels are deep and inky without crush and the skin tones are natural. Detail is sharp and vivid as well with wounds and scars looking beautiful here. Amanda's military scars are detailed enough to see each individual cut and texture as are the individual hairs on Mike's beard. Other props in each room have the necessary grime and dirt on each set piece as well with costumes showing nice threads. It's a great looking video presentation with a ton of depth and different stylistic choices. There were no video issues to speak of here either.

Escape Room comes with a fantastic lossless DTS-HD MA 5.1 mix and has all of the horror elements in the sound design to scare and thrill you. This is a fully immersive sound design with tons of sound effects that will put you into the center of the horrific on-screen elements. Sound effects of fast blowing smoke in every corner of the room, glass breaking, distant music that echoes and reverbs in large spaces, and other haunting sounds really do electrify this sound design.

There is excellent directionality, as well. The score always adds to the thematic tones and suspense of each scene, but is largely forgettable. There is a great low end of bass that keeps pumping through the bigger action moments and rumbles the walls. Lastly, the dialogue is clean and easy to follow along with and free of any pops, cracks, and hiss. This is a great audio presentation for this film with all the added bells and whistles.

The bonus features are very short, but feature the set design, casting, and real escape rooms. There are also a few deleted scenes, including alternate opening and endings.

Escape Room won't change the genre nor will it show anything truly original that you haven't seen countless times before in other films. That being said, it's a fun movie with fast-paced thrills, top-notch filmmaking, and perilous set designs. There are good audio and video presentations as well as some decent bonus features. Worth A Look!

Sale Price 12.37
List Price 19.99
Buy Now
3rd Party 39.99
In Stock.
See what people are saying about this story or others
See Comments in Forum
Previous Next
Pre-Orders
Tomorrow's latest releases