Once Upon a Deadpool

The Merc with a Mouth returns in Once Upon a Deadpool and takes aim right at the funny bones with a family-friendly, alternative telling of Deadpool 2, and Fred Savage joins the raunchy-lite but still irreverent mutant hero in a journey of self-discovery. Deadpool unleashes his hot load of teenage angst on Blu-ray with the same near-reference HD video, a demo-worthy DTS-HD audio mix but disappointingly lacking a sack of supplemental material. Deadpool's hefty package is nonetheless Recommended for the whole family.

After the first movie was successfully and ironically marketed as the perfect romantic-comedy for Valentine’s Day, Deadpool 2 was mockingly billed as a family-friendly event centered around such themes. Of course, being stamped with an R-rating flew against the face of this promotional campaign, denying entry once again to those parents who mistakenly — or rather, who chose to disregard the parental advisory — took their younglings to a grossly-inappropriate, excessively-raunchy superhero movie. A few months later, producers of the sequel attempted to rectify this misunderstanding by reediting the film into a more suitable PG-13 version just in time for the holidays.

Retitled Once Upon a Deadpool, this alternate take most notably parodies The Princess Bride, using it as a framing device from which to retell Deadpool 2. The film even features a kidnapped Fred Savage as a larger part of the gag. Forced to reenact his role as the flu-stricken grandson reluctantly made to listen to grandpa read him a fairy tale, Savage is hilariously game while strapped to a bed inside a reconstruction of the bedroom from the Rob Reiner classic. Continuing in the self-referential tradition the comic-book character is celebrated for, Ryan Reynold's Deadpool plays the role of Peter Falk's grandpa, occasionally commenting — or more like, interrupting — its own narrative, which includes scenes from Super Duper [email protected]%!#& Cut Blu-ray edition. 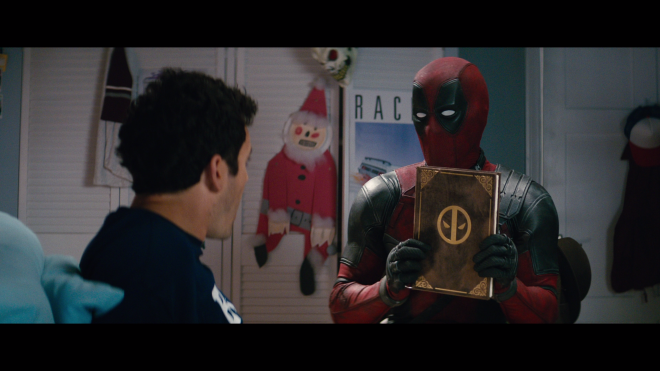 Outside of that, the PG-13 alternative of the sequel is essentially the same movie, and the new parody scenes are genuinely hysterical, especially Savage's performance. Ironically, the film as a whole is not quite as funny as the original R-rated version. The lack of offensive dialogue, graphic violence and the vulgar adult themes are the character's signature style from where the two movies deliver their most memorable punches and impact. In the case of Deadpool, shock value for the sake of shock value actually works in the character's favor. Lightening that aspect for the hope of reaching a wider audience — viewers, which by the way, will watch the movie in spite of the rating system — somewhat neuters Deadpool's mojo, his rock-hard maximum effort. Nevertheless, Once Upon a Deadpool is a great experiment that still delivers the laughs, which fans will want sitting next to an uncensored, unrestrained Deadpool.

For a more in-depth take on Deadpool 2, you can read our review of the Blu-ray HERE.

20th Century Fox Home Entertainment brings Once Upon a Deadpool, which is a 117-minute, PG-13 alternative of Deadpool 2, to Blu-ray as a two-disc combo pack with a flyer for a Digital HD Copy. The Region Free, BD50 disc sits comfortably opposite a DVD-9 copy inside a blue, eco-cutout case. After skipping a few trailers at startup, viewers are taken to a menu screen with full-motion clips and music playing in the background.

Deadpool unloads the hilariously less-gory violence on Blu-ray with the same outstanding, near-reference 1080/AVC MPEG-4 encode as its predecessor, so I'll repeat what I wrote last time.

Shot on a combination of digital cameras and traditional 35mm film, the freshly-minted transfer shows distinct, sharp clarity of the most minute aspects in the background. The tiniest piece of furniture and the unique features of each room is plainly visible in the distance, even during the many fast-paced action sequences. Some of the CG imagery, on the other hand, can look a tad less appealing and arguably shoddy, such as Domino's attack on the convoy. Nevertheless, the coarse, ridged fabric and stitching in Deadpool's uniform, is detailed, clearly showing the tiniest smudge, grime and scratch, while the smallest attribute and characteristic of Cable's cybernetic arm is exposed. Also, facial complexions are highly revealing with lifelike textures in the cast, and the even extensive makeup work has a realistic, very well-defined quality.

Presented in its original 2.39:1 aspect ratio, the presentation also parachutes in with inky-rich blacks and superb gradational details within the darkest shadows and gloomiest of scenes. The entire prison segment is a great, potentially demo-worthy example, providing the image with an appreciable three-dimensional quality. The contrast is noticeably and deliberately subdued, giving the sequel a gloomier, more grayish tone to match the plot's darker themes. Still, whites remain crisp and brilliant throughout. Jonathan Sela's teal-orange cinematography also produces a slightly muted palette, but primaries are animated and vibrant, particularly the energetic reds in blood and Deadpool's outfit. Secondary hues may not impress, but they're nonetheless accurate and full-bodied. (Video Rating: 92/100)

As with the video, the same DTS-HD track has been ported over for this special edition.

With a sharp tongue and cheeky attitude, raunchy sass has never sounded better than it does on this exceptional, reference-quality DTS-HD Master Audio 7.1 soundtrack. Nearly every scene is layered with a variety of ambient noises, from the commotion of city traffic and the crowded mutant prison to helicopters and planes flawlessly panning from the surrounds and into view. The debris from explosions or ricocheting bullets bounce between the sides and rears, convincingly falling all around the listening area and placing the viewer in the middle of the comedic thrills. Quieter sequences are also busy with various atmospherics, generating an outstandingly immersive 360° soundfield.

The front soundstage is continuously expansive and broad, as many of those same atmospherics travel between the three channels with excellent directionality. The mid-range exhibits marvelous, room-penetrating clarity and separation, displaying superb detailing and distinction in the loudest, ear-piercing segments as well as in the song selections and musical score. Amid the bumbling mayhem and blundering chaos, dialogue reproduction remains crisp and precise from beginning to end. A powerfully robust low-end not only delivers room-shaking oomph and impact to the action, but it also provides the music with awesome weight and presence, making this lossless mix a fantastic crowd pleasure. (Audio Rating: 96/100)

Sadly, this family-friendly version of Deadpool 2 chucks out the same satisfying sack of supplements, which can only be enjoyed on the previous Blu-ray release.

The Merc with a Mouth returns in Once Upon a Deadpool and takes aim right in the feels with a 117-minute, PG-13 version of the same plot, driven by an emotional core that places the irreverent mutant hero in a journey of self-discovery. But overlooking all that mopey, mawkish fluff, the sequel delivers more of the same cheeky, raunchy humor with the action visuals to match while also feeling wholly original. Deadpool unleashes his hot load of teenage angst on Blu-ray with the same fantastic video presentation and the same awesome, reference-quality DTS-HD MA soundtrack. Disappointingly lacking a satisfying sack of supplemental material, Deadpool's hefty package is nonetheless recommended for the whole family.

Sale Price 14.99
List Price 29.99
Buy Now
3rd Party 14.99
In Stock.
See what people are saying about this story or others
See Comments in Forum
Previous Next
Pre-Orders
Tomorrow's latest releases