On the Basis of Sex

On the Basis of Sex could have easily been called RBG: Begins in this origin story for the popular Supreme Court Justice directed by Mimi Leder and starring Felicity Jones and Armie Hammer. While the facts are fascinating, the film colors the typical paint-by-numbers biopic picture with few surprises and a lack of genuine drama. Universal Studios delivers a Blu-ray with a favorable verdict with a splendid video transfer and a solid audio mix to match. Bonus features are guilty of being a bust. If you're curious about RBG, On the Basis of Sex is at least Worth A Look even if it doesn't hold any surprises. 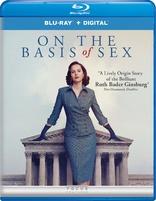 Ruth Bader Ginsburg (Felicity Jones) is more than brilliant. Top of her class at Harvard Law and Columbia University, she should be an easy hire for any law firm in need of a qualified lawyer with a preternatural understanding of law and precedence. But she's a woman in an era where the 14th Amendment states that everyone is equal - but laws and statues say otherwise. Her husband Martin (Armie Hammer) has no trouble getting a job at a New York tax law firm while she can only take a teaching position. But when a gender discrimination case (against a man) lands on her desk, she has the chance to not only prove she's a capable attorney but rewrite the nation's laws in the process.

Ruth Bader Ginsburg is enjoying quite the run these days. As an elder Supreme Court Justice during a particularly turbulent time, she's in sharp focus, between the engrossing documentary RBG and now the highly-dramatized On The Basis of Sex. If you want straight and interesting facts that will genuinely enlighten you - stick with RBG. If you're game for something simple and easy with zero surprises and not a lot of dramatic punch, On the Basis of Sex is the way to go.

It's not the performances that are the problem. Felicity Jones delivers yet another fierce and committed performance as Ruth, Armie Hammer brings his calming stature as the amiable Martin, and the pair work off each other perfectly. Justin Theroux's Mel Wulf, the lead attorney for the ACLU, is a fun fixture in the events, while Chris Mulkey turns in another solid performance as Charles Moritz whose case hinges on Ruth's willingness to try where others refused. The cast is great, but dramatically flat plotting undermine their efforts.

Nothing comes as a surprise. Even if you don't know what's about to happen when a plot point arrives it's played in such a way that you know exactly what's going to happen next because this movie does nothing to differentiate itself from countless other biopics of the same type. The principal problem here is we never actually get to see Jones' RBG fail. Failure makes success sweet and rewarding. We constantly hear about how she's facing an uphill battle in life, but outside of a single scene with Sam Waterston as a stodgy old Harvard dean telling her "no," there's no dramatic arc to follow. Even when moments in her case go badly, you know things are going to turn around because everything else we've seen has gone that way. There's never a moment where you don't believe she's going to win.

After just having seen Vice and not particularly loving that film, in contrast, I wish On the Basis of Sex had the gumption to have the same level of fearless energy. Where Vice struggled with its tone and aim, On the Basis of Sex struggles with extremely flat and boring predictability. It needed a kick! This is a two-hour movie where you already know the end even without knowing a thing about Ruth Bader Ginsburg. She's a fascinating character for sure. She accomplished a lot during a particularly difficult time period, but this movie makes years of work and familial sacrifice look easy and common - not something special and unique like the actual Ruth Bader Ginsberg.

Universal Studios delivers On the Basis of Sex to Blu-ray in a single disc Blu-ray + Digital release. Pressed on a Region A BD-50 disc, the disc is housed in a standard sturdy case with identical slipcover artwork. The disc loads to trailers for other Universal releases before arriving at an animated main menu with traditional navigation options.

Apparently finished on a 2K DI, On the Basis of Sex faces no discrimination in the video department. This is an often stunning 1.85:1 1080p transfer. The first thing that stands out is how much detail and depth there is in the image, a three-dimensional quality that's maintained throughout the run of the film. Facial features get their day in the sun, but the period costuming and set design bring the late 60s and early 70s back to life. Colors skew slightly warm with golden tones getting the highlight, but never skewing primaries. Blues and reds are rightly prominent with healthy skin tones. Black levels and contrast are on point with plenty of dimension. The only real quibble I have is at this resolution some of the establishing shots or CGI-altered backgrounds standout like a sore thumb. It's worse in daylight scenes of New York City often betraying that some moments were captured on a studio lot or were heavily altered to give the period-accurate look and feel.

On the Basis of Sex makes great use of its DTS-HD MA 5.1 audio mix, providing a rich and spacious soundscape. The film is often very quiet and conversational, but these conversations usually take place in larger open rooms with terrific ambient effects to give the mix a nicely immersive quality. In subtle small ways, surrounds are almost always engaged without the mix ever sounding too front/center loaded. When the film shifts to a large crowded classroom or the streets of New York there is plenty of hustle and bustle to keep the mix engaging on all sides. Dialogue is always crystal clear. Scoring is solid and maintains a full mix. Levels are spot on without any need of adjustment.

It's actually a shame that the RBG documentary wasn't included as some kind of two-disc set. It really is the perfect bonus feature for a film like this. As it rests, what's here is pretty average talking heads material. There are some okay behind the scenes stuff, but not enough to make the material any better than promo stuff you'd find on YouTube.

While performances are great and Felicity Jones delivers a terrific turn as Ruther Bader Ginsberg, On The Basis of Sex plays it too safe to be dramatically enthralling or enlightening. Universal Studios delivers a solid Blu-ray release with a great video transfer packed with a strong audio mix to match. Bonus features are a bit of a bust. As a whole if you're interested in an introduction to Ruth Bader Ginsberg's career this is passable entertainment, but for an educational experience stick to the documentary. On the Basis of Sex is Worth a Look.

Sale Price 12.99
List Price 22.98
Buy Now
3rd Party 12.88
In Stock.
See what people are saying about this story or others
See Comments in Forum
Previous Next
Pre-Orders
Tomorrow's latest releases