From 2001 - 2009, the most powerful man in the world may not have been the President of the United States, but the man who stood in his shadow, Dick Cheney his Vice. Starring Christian Bale, Amy Adams, Steve Carell, Sam Rockwell and written/directed by Adam McKay, the film takes a scattershot farcical comedic approach to one of the most divisive players in recent political theater. How well you enjoy this film will depend entirely on your personal political leanings and whether or not you feel it's worth the semi-comedic sendup. 20th Century Fox delivers a beautiful Blu-ray transfer with an excellent audio mix backed by some solid bonus features. Certainly not for everyone, Vice is at the very least Worth A Look.

"I'm having a heart attack, you idiot."

He was kicked out of Yale for drinking and bad grades. He worked a rough high-wire job for the electric company. He was busted for drunk driving twice before he cleaned himself up. He then went to Washington D.C. and was an intern for a powerful Representative. Paying attention when he should, speaking only when necessary; he capitalized on every opportunity to thrive in a changing political landscape with his wife Lynn (Amy Adams) by his side. He is Dick Cheney (Christian Bale), Vice President to George W. Bush (Sam Rockwell) and arguably one of the most powerful men in the world. 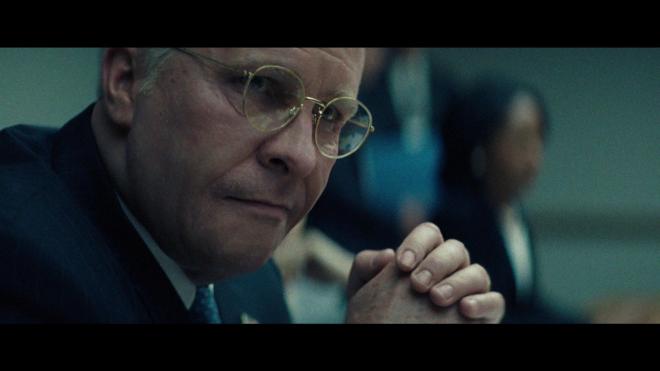 There's a piece of me that is naturally drawn to political theater. Growing up with the paranoid thrillers from the 1970s combined with numerous viewings of All The President's Men and then the conspiracy-laden Oliver Stone features JFK and Nixon, I tend to get excited about films that delve into the deep dark dirty side of Washington political operations. Given recent history and how we're hardly 10 years removed from his presence as a leader, Dick Cheney is the perfect mark for an in-depth exposé of how he wrestled and wrangled power from being a nothing to Chief of Staff inside of 11 years. Unfortunately for me, Vice didn't stick the landing.

I love political farce - Wag the Dog and Primary Colors are terrific and hilarious looks at the realistic absurdity of Washington D.C. life. Vice may either be too recent and raw a subject or that it's entirely too on-the-nose with a specifically pointed view that the comedic elements just fell flat. There are some surges of humor here and there - anytime Christian Bale's Dick Cheney gets a heart attack is actually pretty damn funny for how he plays it. The rest of the performances aren't bad either. Amy Adams is great as Lynn Cheney delivering another fierce and passionate performance. Sam Rockwell gives us a solid George W. while Steve Carell delivers a fine Donald Rumsfeld.

The primary problem for me is the film's tone. It tries way too hard to be funny when it isn't appropriate and then it spends the rest of the film trying to get the audience worked up and angry about events that happened nearly twenty years ago. I wasn't a Bush supporter then nor have I reevaluated my opinion of his administration in the time since. I spent a lot of time being angry about this stuff in my 20s. I don't have time for it in my late 30s, and how we're still dealing with the fallout of past decisions, it's just not that funny.

At the end of the day for me, Vice is a very well-acted film, beautifully shot, well-edited, and features an excellent score by Nicholas Britell - but it's not something I would call worthy of the Best Picture Oscar nomination it was honored with. It's not farcical or outlandish enough to be funny and its viewpoint is so narrow that it can't be considered entirely honest and accurate to be educationally informative. It plays to a base audience. It's not out to change opinions or truly enlighten people about one of the most interesting political movers and shakers in modern history.

Vice is elected to Blu-ray courtesy of 20th Century Fox in a two-disc Blu-ray + DVD + Digital set. Pressed onto a Region A-locked BD-50 disc, the discs are housed in a two-disc eco-friendly case with identical slipcover artwork. The disc loads to trailers for other Fox releases before arriving at an animated main menu with traditional navigation options. 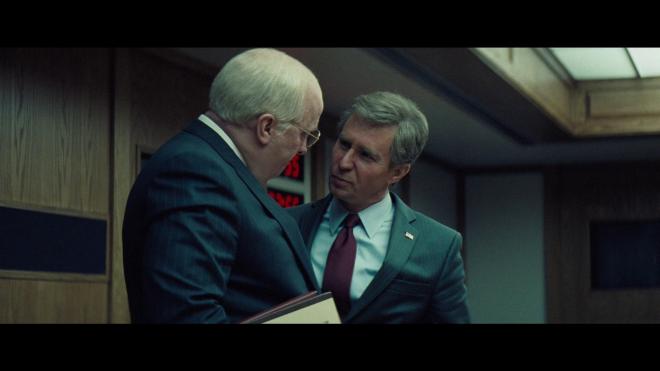 My one complaint of the home video release of Vice is that it is not being offered in 4K UHD - and it needs to be! Shot on a combination of 8mm, 16mm, 35mm and finished on a 4K DI, this is a beautiful looking 1080p 2.39:1 transfer that delivers a terrific filmic image. Film grain is apparent but never too intrusive, even with the film stock changes, the effect is pretty seamless. Details are splendid, allowing for a number of close-up shots to let you fully appreciate the incredible makeup work that went into transforming the cast. (Bale's added poundage plus makeup is damned impressive work.)

Colors are vivid too, traversing a range of time periods from the early 1960s and into the 2000s. The image allows the color pallet of the respective era to define the scheme. The 70s get that ghastly green color that makes everyone look an appropriate level of sickly. Depending on the film stock used for various moments, the black levels can shift a bit, the 8mm and 16mm moments being a bit grey/hazy rather than inky black. That said, even with the quality differences, the image maintains a terrific sense of three-dimensional depth. My only tiny negative is that occasionally whites could look a little hot and add some blooming, but it's such a tiny complaint that it's barely worth mentioning. Everything else about this transfer is damn-near picture perfect. For a native 4K film, I really wish we had a full 4K UHD disc to pick over. 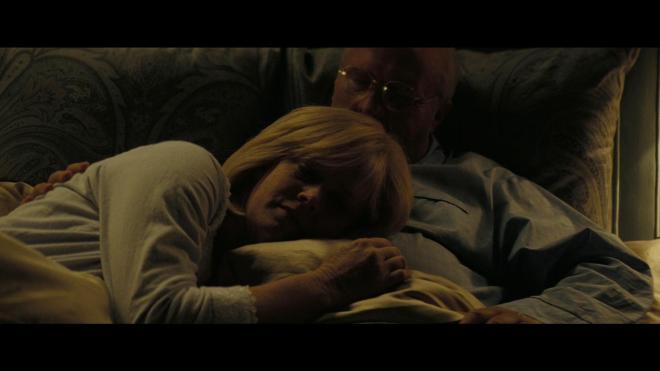 While the film was finished and released with an Atmos mix, 20th Century Fox opted instead to go with the downgraded - but still impressive - DTS-HD MA 5.1 audio track. Dialogue is the major player here. Not because the film is "talkie," or overly conversational - which it is - but because of Christian Bale's distinct delivery perfectly aping Dick Cheney's soft-spoken muffled way of speaking. You never once have to adjust the volume to compensate - especially when he's paired into a room with Carell's Donald Rumsfeld or Rockwell's George W. Bush who are much louder and more gregarious - the mix handles the differences in tone with ease.

Scoring by Nicholas Britell keeps the mix lively and engaging while the simple and subtle sound effects keep the surrounds working nicely. Even without the full Atmos effect, the soundscape manages plenty of atmospheric qualities. The tight confined rooms during the initial 9/11 attacks are a tense and hypnotic parade of voices, shuffling bodies, phones ringing and television reporting. Like the video, it may not be as good as we could have possibly gotten on home video - but I have no complaints with this effective audio mix. 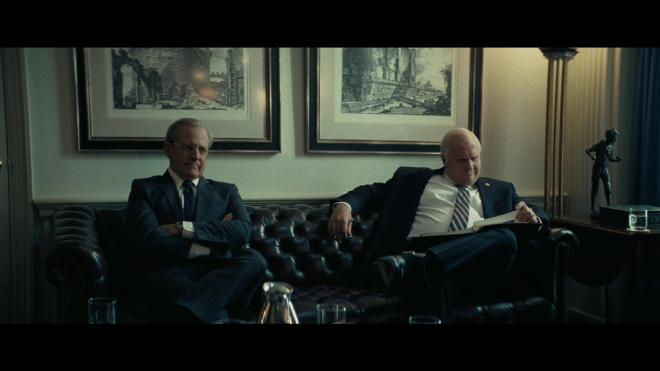 While the film wasn't a big success at the box office, Fox still managed to pull together a pretty decent package of bonus features. The Deleted Scenes material showcases an alternate opening while the final big moment is the cut musical number that just didn't fit the film. The making of mini-doc is actually pretty decent as well offering much more than the typical talking head behind the scenes EPK stuff. 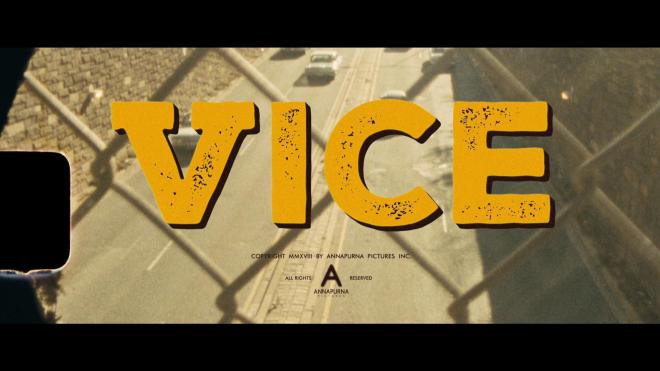 Vice finds itself in a precarious position of attempting to enlighten an audience about a major political player while also providing some farcical comedic entertainment. How much mileage you get out of the show is going to depend entirely on the individual. The film features a hell of a cast and Bale fully immerses himself in the part, McKay's latest just didn't work the same magic as The Big Short for this reviewer.

20th Century Fox brings Vice to Blu-ray with terrific results. The image transfer is gorgeous and the audio mix is solid material. While the lack of a 4K UHD release is a bummer, this Blu-ray is technically terrific even if the film itself may not do it for you. If you're curious, Vice is at the very least Worth A Look.

Sale Price 7.99
Buy Now
3rd Party 2.56
In Stock.
See what people are saying about this story or others
See Comments in Forum
Previous Next
Pre-Orders
Tomorrow's latest releases