The Standoff at Sparrow Creek

It's tough to do a potboiler mystery right, but Henry Dunham has done a masterful job with The Standoff at Sparrow Creek from RLJE Films. A tight, tense thriller about a group of militiamen trying to figure out which one of their own committed a horrible mass shooting emerges with a brisk pace and never overstays its welcome. The Blu-ray offers a terrific if purposefully very dark transfer with a solid and eerie audio mix to match. Bonus features are unfortunately very light. If you love simple and to the point thrillers, Sparrow Creek delivers. Recommended.

A lone man came out of the woods armed with a modified automatic AR-14, thousands of rounds, and improvised explosive devices and attacked the funeral of a slain police officer. Former cop burned by the system turned militia man Gannon (James Badge Dale) and his fellow militia members Noah (Brian Geraghty), Beckman (Patrick Fischler), Morris (Happy Anderson), Keating (Robert Aramayo), Hubbel (Gene Jones), and their leader Ford (Chris Mulkey) discover the weapons used in the shooting came from their armory. As more militia attacks against police spread across the country, Gannon must prevent further bloodshed by finding out which of their number committed the crime before the police and National Guard find them. 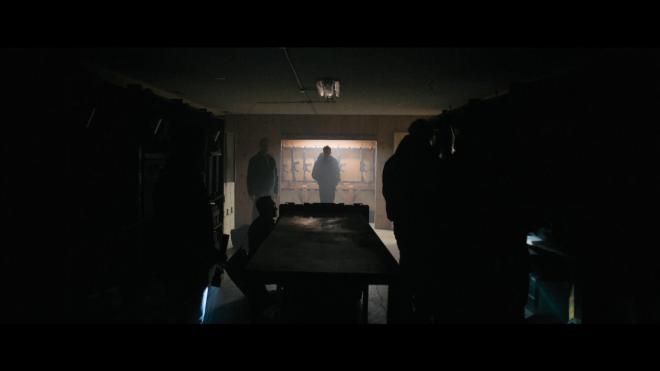 Written and directed by Henry Dunham, The Standoff at Sparrow Creek is an exercise in simplicity. The small dynamic cast, single location, with simple and to the point plot setup leads to a well crafted edge-of-your-seat potboiler. This isn't the sort of thriller where bullets fly all over the place. This isn't the sort of thriller where a shadow government intelligence agency watches your every move. This is a talking thriller where every plot point hinges on a turn of phrase. Like a true Agatha Christy styled-mystery, you have to pay attention to everything people are saying. If that's too much of a task, you may not get a whole lot of mileage out of this film. For my money, I was as happy as a pig in a mud hole.

The Standoff at Sparrow Creek is a dark movie. I don't just mean thematically but visually as well. Most of the film is backlit by a single source as the militia members hideout having to go literally dark to keep from being spotted by helicopters or patrolling police cars. It's a smart device that adds to the boiling tension when you can hardly see when a character emerges into a scene - but also when danger comes knocking at their door. Thankfully each of the characters is so thoroughly drawn and brought to life by their respective performer that even when you can hardly see who is speaking you never lose track of the characters.

At a brisk 88-minutes, Sparrow Creek never overstays its welcome. All the way up to the big final reveal the film keeps you guessing. Even as confessions come forward you start to understand how each man's own motives gives rise to false witness and a willingness to take credit. Granted, it can feel like a stretch to try and empathize with a character that may or may not be responsible for one of the worst crimes imaginable, but like any good piece of fiction, you are asked to look at things from each character's point of view. It also smartly doesn't ask the audience to condone mass murder.

With Gannon - played impeccably well by James Badge Dale - as our guide, we're given clean eyes to view this world through. He's a lost man. A believer in the system and law and order but also at odds with its methods, so he understands his fellow militia-members and their point of view. He's not 100% on board with their goals either so he must straddle the razor's edge. You're asked to not judge them based on their beliefs but the very real possibility that one or more of them are innocent men of a terrible crime and don't deserve to be brought down by the actions of another man.

Growing up, local militias were a very real thing in my sphere. The leader of the Michigan Militia lived in my home town hardly a stones-throw from where I went to school and the KKK would make its annual march into Ann Arbor - so this sort of material hits a little close to home and is probably why I found it so effective. It very much reminded me of the early days after the Oklahoma City Bombing where the local grocery store made the news because some nut decides that's the perfect place to stage some half-baked political protest. But it's important to remember that not all of those people were like that. They weren't all "gun nuts" out to overthrow the government. So it's on that note I appreciate that Dunham and his cast didn't go out of their way to demonize people just for their beliefs. Even though most of these men don't like the government, the film makes a point to show them in their limited capacity trying to stop further incidents from spreading.

While I enjoyed the hell out of The Standoff at Sparrow Creek, it wouldn't put it up as a perfect thriller - just a damn effective and entertaining one. The final twist works well for the film, but I can see some out there getting put off by it as it does raise quite a few conveniences within the plot. However, 90% of the time the movie is on point and proves to be a dark and tense little thriller. It's a quick watch and well worth the time you give it.

The Standoff at Sparrow Creek arrives in a single disc Blu-ray set from RLJE Films. Pressed on a Region A BD-50 disc, the disc is housed in a standard sturdy case with identical slipcover artwork and loads to trailers before arriving at a static image main menu. 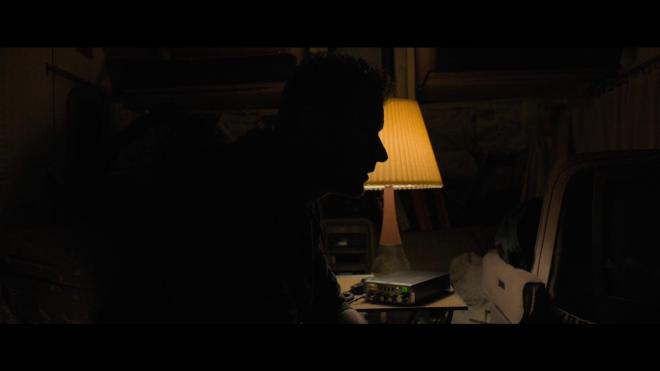 As you'll see with the screenshots, the 1080p 2.40:1 image for The Standoff at Sparrow Creek is dark. Except for a few spare scenes, so we can kinda get an idea what these dudes look like, most of the film is bathed in near total darkness with sparing light sources giving cast and objects only slight lighting. It's a pretty bold way to keep location costs down if you think about it and thankfully it actually works well for this film. The oppressive shadows lead to some nice inky black levels that adds an extra layer of creepiness to the film. You feel like something or someone could come out of a shadow at any moment.

That does limit our color schemes a bit as most of the time you only ever see people with an orange security light. There are a couple of moments with some bright fluorescent lighting that gives off that sickly green quality. Details are relatively sparse, again because of the complete darkness, but when you can make out some fine details in faces, clothing, or the location, they come through with great clarity. Aside from some slight noise, this image is clean and clear and looks great for what it is. It's not a bright beautiful scenic thriller so don't go in expecting that. It's a good one to watch at night with the lights off. 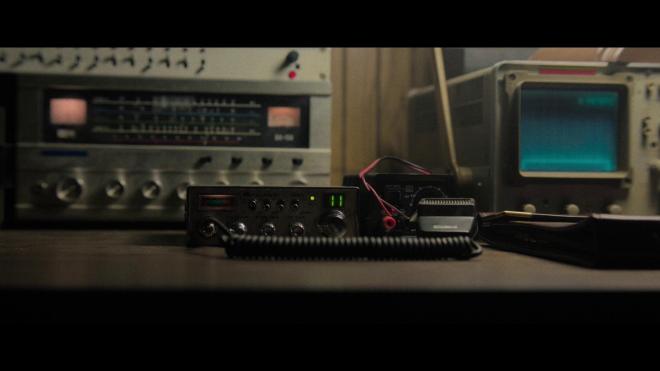 The Standoff at Sparrow Creek makes great use of its DTS-HD MA 5.1 audio mix. The film is very quiet with only sporadic bursts of noise relying on dialogue and ambient atmospheric sound effects to fill up the soundscape. With the echoing of the lumber yard and the sounds of the wind whipping alongside the building, it creates this constantly unsettling atmospheric effect. The surrounds are engaged but only just enough to set the scene. The opening moments where Gannon can hear the gunfire and explosions in the far off distance is an absolutely blood-chilling effect. Dialogue is crystal clear throughout and without issue. Like the visuals, sound is used sparingly but it's used very smartly! 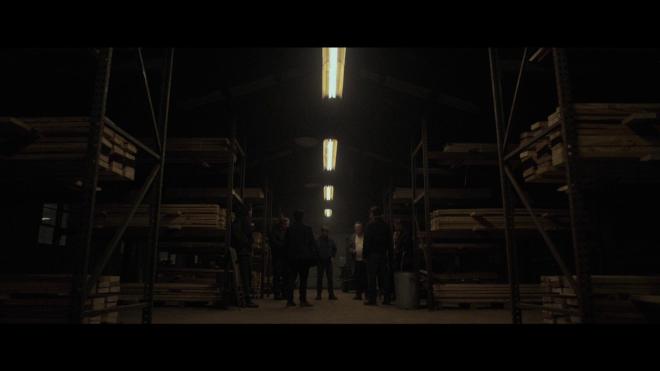 Unfortunately, outside of an EPK talking headpiece, the bonus features are not that informative or robust. Some decent info here, but nothing earth-shattering. Note: The artwork indicates that a still gallery is in the bonus feature package, but there wasn't one included on the disc. 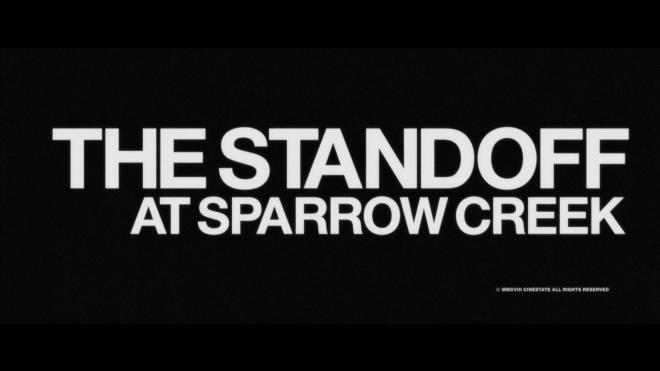 The Standoff at Sparrow Creek is a sharp and simple nail-bitter of a thriller. It's not big on action. Things happen slowly taking its time to build to a boil. With a great cast, this swift flick fills the time and keeps you entertained the whole ride through. RLJE Films brings The Standoff at Sparrow Creek to Blu-ray with a solid A/V presentation considering its rather unique and creative cinematography and sound design decisions. Bonus features aren't much to report. All in all, this flick proved to be an entertaining run and well worth the time. Recommended.

Sale Price 9.95
List Price 28.97
Buy Now
3rd Party 19.98
In Stock.
See what people are saying about this story or others
See Comments in Forum
Previous Next
Pre-Orders
Tomorrow's latest releases