Martial arts fans will want to make room on their shelf for the highly anticipated Sister Street Fighter Collection. These four explosive action flicks star Etsuko Shiomi as a karate master hired to dismantle international drug rings, diamond smuggling operations, and defeat diabolical villains. This is pulpy grindhouse action at its finest! Arrow Video supplies the boxset with an impressive A/V presentation and enough bonus features to please both the superfan and the newcomer. Highly Recommended. 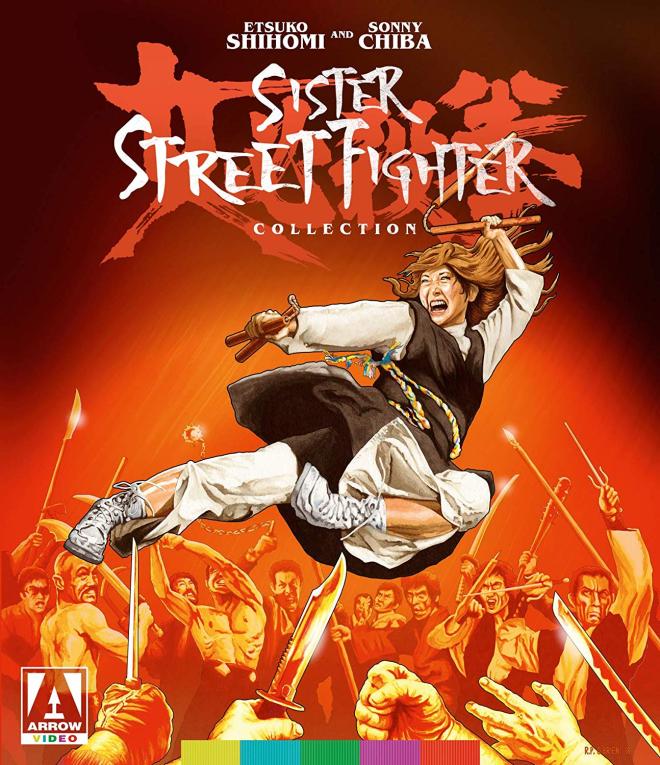 Crossovers and cinematic universes are de rigueur for action cinema these days. Whether it’s a superhero franchise or a gang of street racers keeping audiences interested with connected sequels, prequels, and sidequels (a silly term that I am only becoming used to hearing) isn’t new at all. After the overnight success of Sonny Chiba’s exploitation classic The Street Fighter, a series with martial arts newcomer Etsuko Shiomi was planned. Impressed by her acute ability to recreate stunt work, Chiba pressed studio experts who considered Shiomi too plain for the role. Thankfully, cooler heads prevailed and we were given a series of films with one of the most badass female action heroes committed to film. Though always reaching for the same heights as Chiba’s unhinged Tsurugi, Shiomi’s decidedly different take on the Street Fighter mythos will seem like familiar territory once the bodies hit the floor under one of the most unlikely action heroes you’ve ever seen.

Martial artist Li Koryu (Shiomi) is hired by Chinese police to make contact with an undercover agent in Yokohama, Japan who is tasked with finding her brother Li Mansei, a narcotics agent caught while investigating a smuggling operation. She makes contact in the seedy Club Mandarin where things take a turn. Koryu is met with blow dart ninjas, a priest armed with a mini speargun, and The Amazon Seven to name a few of the outrageous baddies our hero has to face. Grisly fight sequences are impressive and equaled in the sheer insanity of the obstacles and characters Koryu has to face along the way. It almost feels like a knockoff Bond film stuck in an acid trip. It may be the makeup, the bright set lights, or something else, but I love that when Shiomi is fighting her face shiny with perspiration. It makes me believe she is REALLY fighting and showing a vulnerability that adds a genuine depth to her character. Call it the “McClane factor” if you will.

Ending on a sad but uplifting note, Sister Street Fighter isn’t a feminist manifesto to the male-dominated action cinema complex, but a firm kick to the head of where action cinema should have gone in the last 40 years. Never sexualized or handled any less than a true Street Fighter, Shiomi commands the screen through a simple drug smuggling revenge plot which pulls out all the stops.

The two sequels Sister Street Fighter: Hanging By A Thread and Return of The Sister Street Fighter are near carbon copies of the first film. In each, Koryu is hired to find a friend or a relative taken to Yokohama where they’ve fallen in with some illicit smuggling operation headed by a power-hungry mob boss who deals in drugs, sex, and collecting fighters to kill Koryu. From blood diamonds sewn into Chinese hookers to dissolving gold bullion, the lengths to which these operations go for a buck stretches the bounds of coherent storytelling. Heroin sewn into costume wigs? How does that work?! You get diminishing returns on the number of action scenes and gore in the sequels, but what you get in trade is some subtle character work. Shiomi’s Koryu isn’t an animalistic fighter, but one that shows remorse, humanity, and occasionally hesitates to go for a kill. At the end of Return, the strains of a lonely trumpet echo that of a Sergione Leone character always out for revenge but never feeling a sense of justice. Knowing what would come next in the series I felt this somber exit for Koryu seemed appropriate.

Sister Street Fighter: Fifth Level Fist is not an official sequel but rather a measured follow up with Shiomi directed by Kazuhiko Yamaguchi (The Street Fighter). Here, Etsuko Shiomi is Kiku a karate expert who helps her friend Michi exact revenge on the criminal organization that killed her brother. It sounds similar, but here we’re given more dramatic elements as we delve into the family dynamics of Michi’s life with her brother. There are some touching moments here, including a flashback with them attempting to survive on the streets as kids. This film was aiming for an audience that wanted something less exploitative than the previous films but still needed some intensity to fuel the fire. With brief moments of action worth calling itself Sister Street Fighter, this entry produced a film that never finds its footing or establishes an identifiable tone. The trailer touts that our hero is, “Shaking off her youthfulness. Etsuko’s brand new appeal!” Unfortunately, this makes me sick. It just sounds like code for “we made her cute and fun while giving her family drama.” No thanks. Just give me more nunchucks! (Seriously, the nunchuck work from Etsuko is awe-inspiring.)

As a complete series, the Sister Street Fighter Collection is pulpy grindhouse action at its finest. Coming to theatres during a time of unprecedented drug abuse and the rise of sex trafficking, these films faced the issues with a cynical view that everyone, no matter friend or foe, was corrupted by the ills of society. Where these films falter is in their cookie-cutter plots. For most of us, we’re comfortable with minimal plots holding together the various meaty action sequences, but for casual audiences, it can make for a boring experience. Filled with surreal imagery, explicit sexuality, gruesome violence, and rewind-worthy fights, these films are an absolute blast to watch. With so many pedestrian films occupying disc and digital queues, I can’t recommend enough that audiences seek out these unusual films.

The Sister Street Fighter Collection kicks its way onto Region A Blu-ray thanks to Arrow Video. Pressed onto two BD-50 discs the collection is packaged in a transparent case with a single hinged tray holding disc one while disc two is slotted in the back of the case. Inside is an insert advertising various Arrow Video releases and a booklet with essays from Patrick Macias and Chris Poggiali. The case is stored in a slipcover featuring new artwork while the same artwork slip for the Blu-ray is reversible. Each disc opens to the Arrow Video logo before landing on the Main Menu. Scenes from the film play behind menu options. When you hear the funky theme music playing you’ve made it! 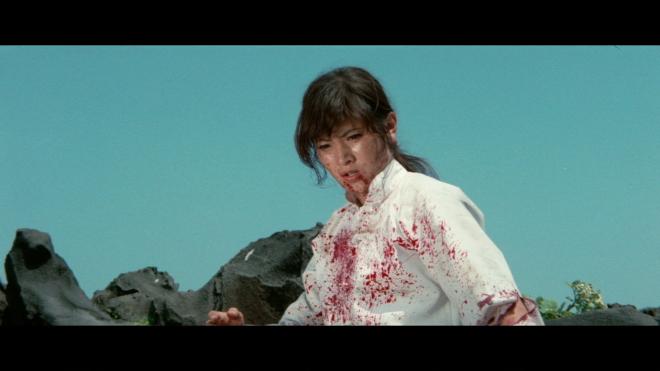 The Sister Street Fighter transfer looks solid, especially given the film’s grimy history on home video. Primaries are nicely saturated such as the red highlights on Shiomi’s costume and the blue waters of Yokohama harbor. Grain structure varies but is noticeably heavy during outdoor scenes. Damage is minimal with specks visible and some image fluttering. Contrast is solid with colors balanced through the feature. Some good depth here. Shadows and black levels mostly retain detail though can favor bluish tones occasionally. Close-ups of costuming reveal fine details like individual stitching on Koryu’s coat or the beads of sweat on her face during fight sequences.

Sister Street Fighter: Hanging by a Thread offers more detail, more color, and better saturation levels. Wow, so much camera shake! Do they know where the camera needs to go or is all this hesitant guessing? The transfer looks promising with the beginning fight scenes displaying lots of vivid colors and even skin tones. Some tiny specks and dirt present but not enough to distract from the presentation. Grain settles nicely on the image though gets chunky during outdoor sequences. The transfer is solid with plenty of detail in shadow, inky blacks on costuming and enough fine detail to make this HD transfer absolutely worth checking out. Crush, artifacts, and dirt are nearly undetectable.

Return of the Sister Street Fighter provides a vivid transfer with excellent grain structure and bold primaries highlighting the vast array of costumes from equally dynamic characters. Contrast is high, producing vivid colors with saturation stable through bright outdoor scenes and waves of dark-suited goons hiding in the shadows.

Sister Street Fighter: Fifth Level Fist supplies an image quality is on par with the other films with a vivid transfer. Bold primaries carry the film through costuming with contrast levels holding strong. Some minimal dirt and artifacts noticeable. Grain structure looks nicely preserved. Black levels lose quality in shadows with some blocking evident though minimal enough to dismiss easily. Noise and artifacts appear but don’t distract enough to warrant a knock in overall clarity. 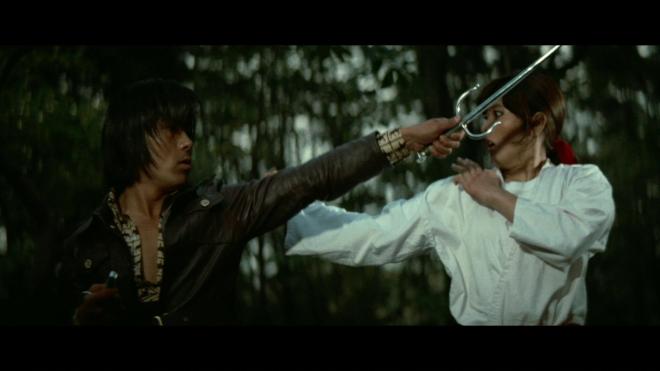 Audio on the films have the earmarks of a vintage audio track. Clarity is a routine issue with crushed layers within the texture resulting in indiscernible effects. Dialogue cuts through the mono mix clearly on each film. Shallow sounding, tinny upper levels reveal their limit with even a modest crescendo in scoring elements. The groovy music tracks lack some depth which is disappointing but with enough volume, it’ll sound just fine. (I recommend checking out the Isolated Score Highlights feature on each disc if the music moves you, baby.) The English dub track on Sister Street Fighter is presented clear and clean but overpowers the mono track leaving nothing in its wake. I applaud Arrow Video for including only the original mono tracks in this release. Though dated and messy they add a level of authenticity and character to the films. 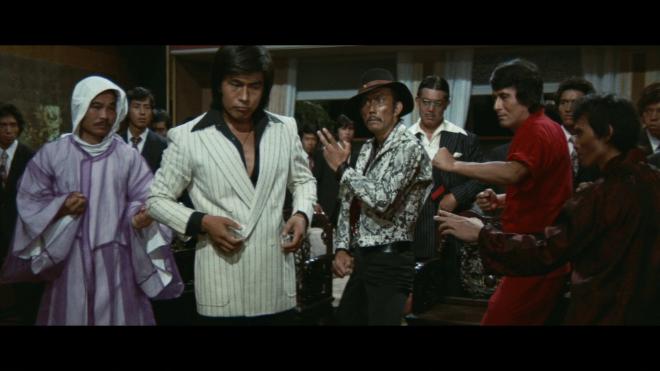 Arrow Video provides some interesting bonus features for both the newcomer and the superfan. Highlights include the R-Rated Cut and the international trailers,  but definitely check out the interviews on Disc One. 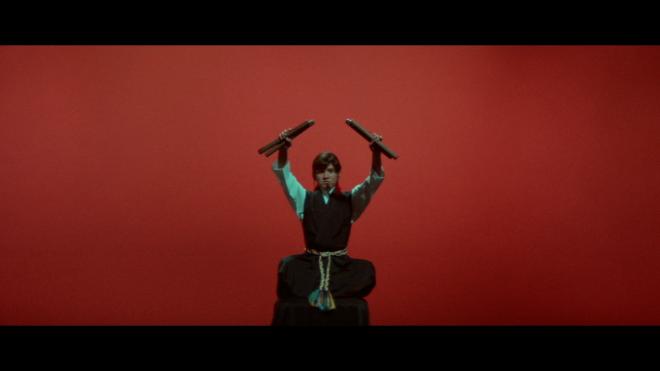 The Sister Street Fighter Collection is campy and trippy beyond recognition but never fails in the intense action scenes designed to cash in on the kung fu boom of the ’70s. Though the fourth film is the lesser of the series, these unforgettable movies are a complete blast to watch! Etsuko Shihomi is a force of nature and her performances deserved to be seen in the best possible presentation. Arrow Video delivers the Sister Street Fighter Collection with an impressive A/V package that supplies an excellent image quality with the original mono audio tracks. Bonus features are worth checking out. Highly Recommended for martial arts collectors, grindhouse nuts, and action cinema fans.

Sale Price 24.49
List Price 49.95
Buy Now
3rd Party 24.49
In Stock.
See what people are saying about this story or others
See Comments in Forum
Previous Next
Pre-Orders
Tomorrow's latest releases