James Wan's Aquaman surprises audiences with striking visual spectacle, dazzlingly action, and a memorable Jason Momoa, course-correcting the DCEU franchise in a fun direction. The standalone sequel swims the choppy shores of Blu-ray with a reference-quality HD video presentation and a demo-worthy Dolby Atmos soundtrack, but a small set of supplements. Still, the overall package is Recommended for superhero fans everywhere.

You can read our full thoughts on James Wan's Aquaman in our review of the 4K Ultra HD Blu-ray HERE or the 4K digital version in Dolby Vision and Dolby Atmos HERE. 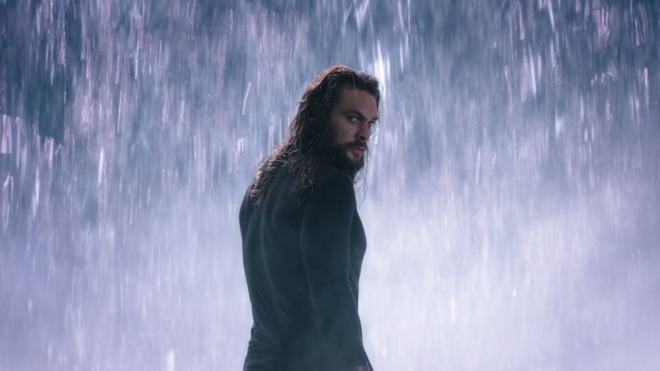 Warner Home Video brings Aquaman to Blu-ray as a two-disc combo pack with a flyer code for a Digital Copy. The Region Free, BD50 disc sits opposite a DVD-9 copy inside a blue, eco-cutout case with glossy slipcover. After a couple of skippable promos, the screen changes to a generic static menu with options along the bottom of the screen and music playing in the background.

The Dweller in the Depths swims to the rocky shores of Blu-ray with a colorfully stunning and absolutely spellbinding 1080p/AVC MPEG-4 encode that blows other DCEU titles out of the water, making it easily the best-looking entry in the series.

Right from the opening moments, Don Burgess's cinematography captivates with an extravagant display of sumptuous secondary hues and pastels, from the gorgeous picturesque scenery of the lighthouse and the town on the Sicilian cliffs to the radiant neon lights of the underwater cities and battles. The HD video also boasts richly-saturated primaries throughout with impressive variation in the various tones and shades, particularly the reds and blues. At the same time, pitch-perfect contrast and brilliantly crisp whites turn every scene, both above and below water, into spectacularly vivid screensaver moments. And black levels are inky rich and luxurious, particularly during the many underwater sequences where dark, stygian shadows penetrate deep into the screen while maintaining exceptional visibility of background details, providing the image with a three-dimensional feel and a lovely cinematic appeal.

The freshly-minted, reference-quality transfer is also endlessly razor-sharp and near flawless, revealing every pore, wrinkle, and blemish in the face of the cast, especially during close-ups. Viewers can clearly make out the smallest detail in the remarkable production design, be it inside the Curry home or outside the local bar. More impressive still is the sharply defined stitching and threading in the Atlantean costumes, the thick nylon belts and the minute flaws in the various weapons, which are plainly visible even during the fast-paced action. In fact, the many, many CG battle sequences are continuously distinct and well-defined from a distance, allowing us to see every piece of debris and rubble while appreciating the tiniest imperfection and crack in the dilapidated wreckage of the ruins.

Also worth noting, the presentation is not CIH friendly, alternating between aspect ratios often intended for IMAX screens but not actually shot in that format. To be perfectly honest, a majority of the movie and the underwater action sequences are in 1.78:1 widescreen, making the 2.39:1 anamorphic scenes rather moot and questionable, so owners will want to just stick with and use their 16:9 screens to better enjoy the movie. (Video Rating: 98/100)

Aquaman debuts on Blu-ray with the same awesome, reference-quality Dolby Atmos soundtrack as its Ultra HD counterpart. For a more in-depth take on the audio quality, you can read our review of the 4K Ultra HD HERE. (Dolby Atmos Audio Rating: 96/100)

Like other entries in the DC Extended Universe, Aquaman lands ashore with its fair share of mild rubbish floating in the water, but thankfully, its recycled story of the King Arthur legend is set free from the net by spectacular action sequences, dazzlingly striking visuals and an awesome performance by Jason Momoa. In the hands of the capable James Wan, the action adventure tale is buckets of popcorn-munching fun and similar to Wonder Woman, course-corrects the series in the right direction. The standalone sequel swims the choppy shores of Blu-ray with an outstanding, reference-quality audio and video presentation. With a small but nonetheless enjoyable set of supplements, the overall package is recommended.

Sale Price 8.96
List Price 18.94
Buy Now
3rd Party 6.99
In Stock.
See what people are saying about this story or others
See Comments in Forum
Previous Next
Pre-Orders
Tomorrow's latest releases