Bing, Bob, and Dorothy are at it again and are hitching a ride on the Road to Morocco. The third in the long-running series sees the song, dance, and comedic hijinks of this dynamic trio in pitch-perfect form. The laughs fly faster than you have time to catch your breath. It may be formulaic, but the mixture still packs a potent hysterical punch. Kino Lorber Studio Classics delivers a beautiful looking Blu-ray with a solid audio mix, and a nice collection of bonus features. Recommended.

"A fine thing. First, you sell me for two hundred bucks. Then I'm gonna marry the princess; then you cut in on me. Then we're carried off by a desert sheik. Now, we're gonna have our heads cut off!"

"Yeah, but the people who came in the middle of the picture don't!"

"You mean they missed my song?"

Bob and Bing are at it again as waylaid cousins hounding for the affections of the beautiful Dorothy. Jeff (Bing) and Orville (Bob) wash ashore in Morocco after the ship they stowed-away on sank. Hoping to find a way home and a decent meal, they get more trouble than they can afford when they meet up with Princess Shalmar (Dorothy Lamour) who's due to wed the violent Mullay Kasim (Anthony Quinn). Only the fortune teller prophesying her wedding keeps reading the stars wrong! If they're not careful, Jeff and Orville could end up dead - and that would really upset their dearly departed Aunt Lucy (also Bob Hope). 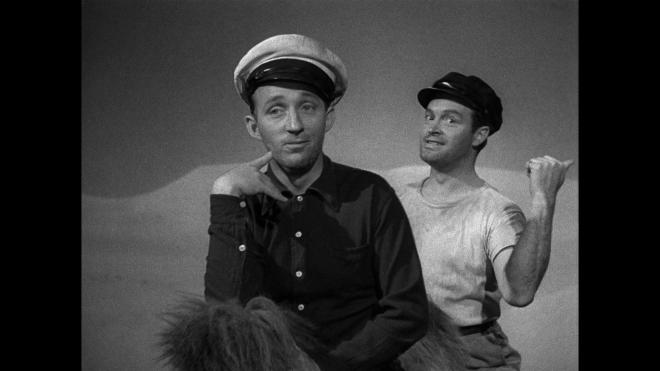 As I've gotten to pick through the Road movies with Bob, Bing, and Dorothy I've come to love the formula of their adventures.  So much of these movies play out like you're watching three friends getting together and having a good time making a movie. The plots aren't complicated as they are carbon copied with only locations and small circumstantial changes. They know the audience is there for a relaxing time and a few laughs so the cast makes sure those gags land. Some of the jokes may not age well, some bits with black face and a moment of autism humor are a bit cringe-inducing, but the rest of the show is just innocent fun. By this point in the franchise, they knew they had a reoccurring audience and they could make several winks and nods about past films for an extra punch of laughter.

With Road to Morocco, will now have reviewed four of these films for High-Def Digest, I'm at a loss to pick a favorite at this point. They all have made me laugh with a high return on entertainment investment for an 82-minute picture. It's like trying to pick a favorite Abbott and Costello film when there are entirely too many to choose from. Each has a strength and a weakness, but even those weak points aren't deal breakers because there's still a lot of material to keep you laughing.

What makes Morocco special for me were the numerous fourth-wall breaking wink and nods. Three films in, they have a lot of material to pull from and they never let a chance to skewer a past film or each other's personal lives pass them by. For a song and dance picture, the music numbers are catchy, funny, and this time there's a great excuse to stop the show for a tune. The three are walking in the desert when they start to hallucinate each singing their parts of the song but with the wrong voice. It's a silly bit on its own but the cast does a great job of adding a little extra ham and egg by parodying each other's delivery and mannerisms.

Is Road to Morocco the best film of the series? Hard to say, but you can appreciate how comfortable everyone is making these. Even with that level of comfort and familiarity, they didn't let themselves become complacent. From frame one, the movie is a gas all the way to the end with near-constant laughter and some very clever gags to keep something familiar feeling fresh and hilarious.

Road to Morocco saunters onto Blu-ray courtesy of Kino Lorber and their Studio Classics label. Pressed onto a Region A BD-25 disc, the disc is housed in a standard sturdy case. The disc loads directly to a static image main menu with traditional navigation options. 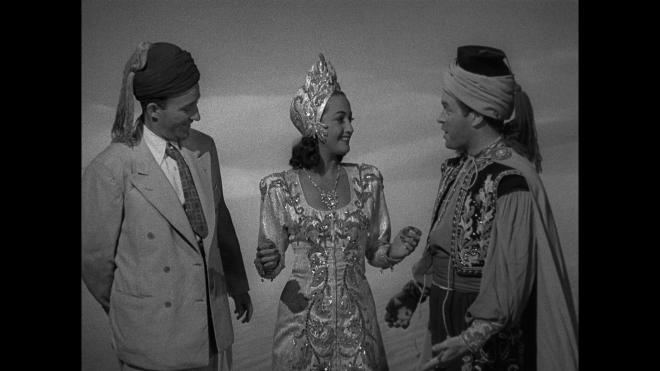 For a film that's nearing 80 years old - this is damn beautiful looking 1080p 1.37:1 transfer. While there are a couple of patches where there are some age artifacts like speckling and small scratches, so much of the image looks pristine that it's often jaw-dropping. The amount of detail is a real treat. The first scene Bing learns Bob Hope getting ready to wed Dorothy Lamour, the intricate costuming is really eye-catching and this transfer lets you examine practically every stitch. Film grain is apparent but stable without ever getting too noisy or intrusive. Greyscale offers up plenty of range from bright white to deep inky black giving a terrific sense of image depth. Some interesting optical effects - a camel head coming in and out of frame, for example - come with a little heavier grain and some extra speckling, but that really is the worst of the damage. I'm not sure the vintage of this transfer but it never disappoints! 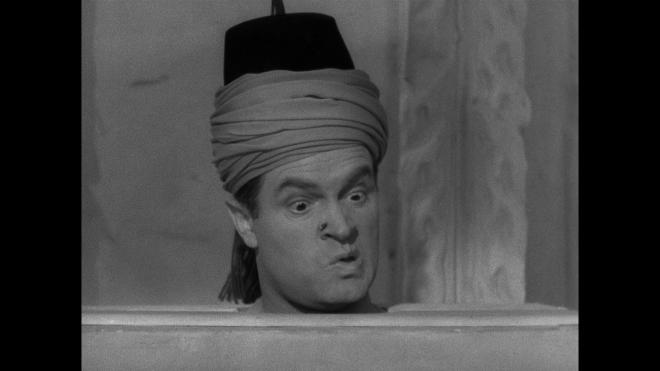 When the worst thing you can say about a nearly 80-year-old movie is that there is some occasional slight hiss, that isn't bad at all. By all respects, this DTS-HD MA 2.0 mono track is excellent material. The fast-paced quippy dialogue and the catchy songs come through crystal clear. Sound effects are well managed to give a nice sense of space and dimension even though the slight echo quality betrays the fact that most locations were shot on a sound stage. Scoring can sound a tad tinny in spots but it's not really that distracting. Like I said at the outset, there is some slight hiss here and there, but it's not intrusive and it doesn't pull back from the other audio elements. Levels are spot on. 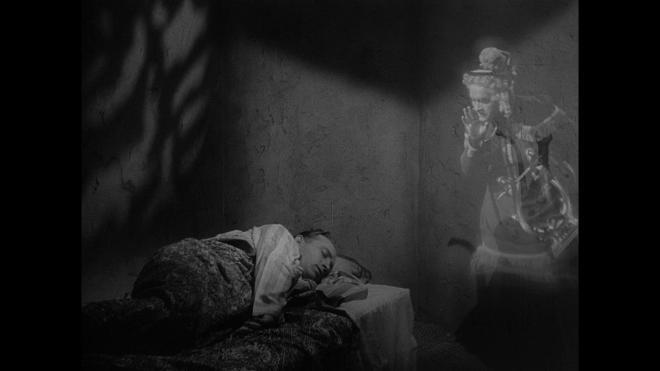 While it may not be a robust assortment of bonus features, it gets the job done. Again it's nice to see the highlight reels of Bob Hope's work on the screen and behind the scenes. 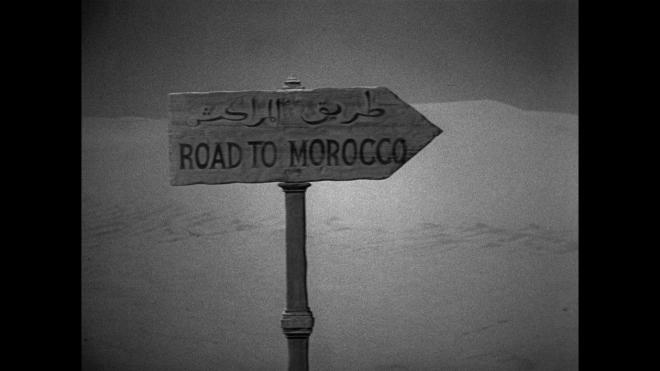 When you see one Road movie, you may well have seen them all - but they're all fun in their own way. Plot and story aren't really the main focus here. You come to a picture like Road to Morocco to watch Bing, Bob, and Dorothy do what they do best! As their third film, they were a well-established performing trio giving a hell of a show. The laughs still fly fast without giving you a whole lot of time to catch your breath.

Kino Lorber Studio Classics delivers yet another great Blu-ray release for this franchise. Picture quality is uniformly excellent allowing plenty of detail to come to view while the audio track keeps the song and dance numbers lively. Bonus features are well worth picking through while you're at it! If you're a fan of the series, this Blu-ray is Recommended.