Where are Bob, Bing, and Dorothy off to this time? They're on the Road to Zanzibar! The second in the long-running franchise of Road films featuring the song and dance comedy antics of this talented cast. After the surprise success of Road to Singapore, Zanzibar was rushed into theaters - and it kinda shows. A little clunky in the midsection, the show loses focus a time or two, but the manic energy of Crosby and Hope keep the laughs coming - even if you don't know where the adventure is going. Kino Lorber Studio Classics release Zanzibar onto Blu-ray with a decent image transfer, a fine audio mix, and a couple of decent bonus features. If you're a fan of the run thus far, it's Recommended.

"Everybody knows him. He's a philanthropist."

Chuck (Bing) and Fearless (Bob) have been schlepping around Africa as carnival showmen - in one form or another. Their latest hustle involves shooting Fearless out of a cannon through a ring of fire and into the river while Chuck rakes in the dough. Only the gag doesn't go as planned. When the dummy decoy Fearless bursts into flames and burns the circus to the ground, the pair are on the run. But when they meet up with waylaid Donna (Dorothy) and her friend Julia (Una Merkel), they're off on an adventure into the wild unknown to Zanzibar. What's waiting for them there? They don't know, they'll figure it out when they get there. 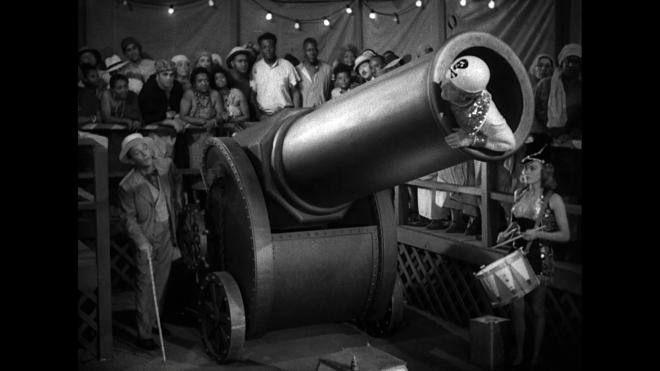 Road to Zanzibar is damn funny stuff. Bob Hope and Bing Crosby are at their usual best delivering solid zingers and quips with ease. The show tunes are catchy and entertaining and the over-the-top situations they find themselves in getting sillier and sillier. One of the best bits of the whole movie is when they find a native hut full of drums and start rocking out with some impressive rhythms. What they don't know is they've accidentally called the local tribes together - and they can't decide if Bob and Bing are gods… or lunch! Other bits and pieces like that come along at random offering the pair a great deal of hilarity and hijinks.

You may have noticed that I haven't mentioned Dorothy Lamour yet. that's because she's pretty well treated as an afterthought. There's the usual gag of these pictures where Bob and Bing squabble for her affections and Bing always wins out, but even that is treated as an afterthought as there are long stretches where Lamour isn't even in the picture. She doesn't show up for most of a half hour and then goes 10-15 minutes between appearances. The random madcap with loosely scripted plots can be both a benefit and a setback for the Road films at any given time. Road to Zanzibar is by far the clunkiest. It jumps from plot point to plot point without really settling down into a rhythm. But then again, these movies have never exactly been all that hung up on plot. They're merely a collection of key scenes in various locations that give the cast an excuse to be on screen together for a little song and dance with plenty of comedy.

While Road to Zanzibar may well be the weakest entry of the pack, it's still damn hilarious. At 91-minutes, it may feel a bit padded in spots and you may lose focus a bit, but just when you think the movie is going to be a stinker, Bob and Bing come together for another terrific comedy bit. It helped that both men brought the writing team from their respective radio shows to punch up the jokes for these movies. While there are credited scriptwriters, you have to give credit to the nameless for knowing how to make Bob and Bing really funny together. The trio of Bob, Bing, and Dorothy may only have a couple of good moments together, but it's the duo of Bing and Bob who keep Road to Zanzibar on the right path.

Kino Lorber brings Road to Zanzibar to Blu-ray courtesy of their Studio Classics Label. Pressed on a Region A BD-25 disc, the disc is housed in a standard Blu-ray case. The disc loads directly to a static image main menu with traditional navigation options. 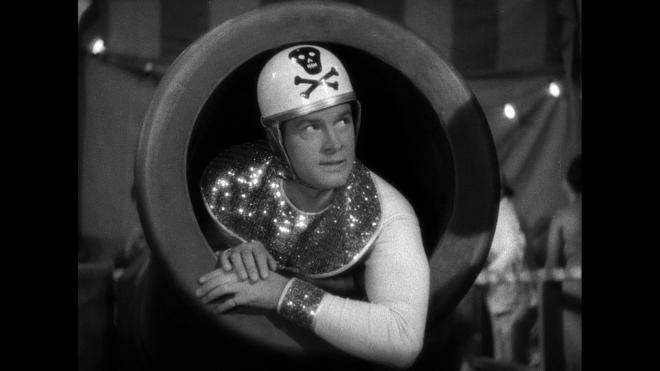 As with the other recent releases of Road to Singapore and Road to Morocco, Road to Zanzibar arrives with an often stunning presentation 1.37:1 1080p presentation that is held back by a few age-related artifacts. The worst offender for this particular transfer is flicker. It isn't a horrible transgression but it can be a tad distracting. Usually, this effect crops up just before an optical transition and doesn't last for long, but it's present just the same. Some occasional speckling can be spotted here and there, but that's the worst of the defects. Everything else with this transfer is damned impressive. One of my favorite scenes of the movie is when Bing and Dorothy are out in a boat at night singing their standard swooning love song. There is a perfect greyscale here allowing for a pleasant mix of light and dark with a range of shadows giving the image a strong sense of depth - even when the background occasionally shifts to a projection. Details are robust throughout allowing you to easily make out some of the fake greenery that's passing as jungle. Film grain is intact and present giving the image a respectable filmic quality. 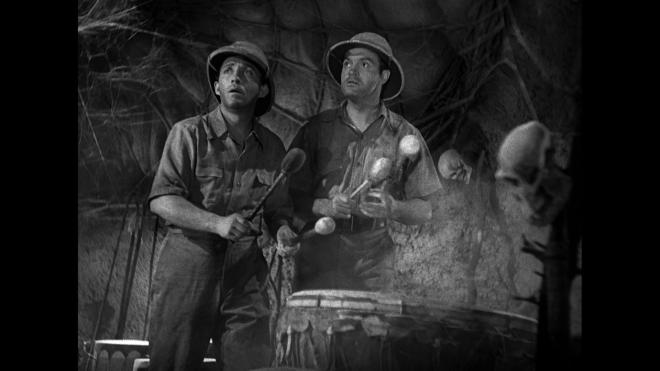 Road to Zanzibar makes great use of its DTS-HD MA 2.0  mono track. I was really impressed with how clean this track sounded. When you get a film of this sort of vintage you come to expect a little bit of hiss or maybe the occasional pop here and there, or when a song breaks out the higher register tones can become a tad tinny, but that's not the case here. Without sounding flat or lifeless, this is a beautifully clean mix with crystal clear dialogue. Which is great because when the plot slims down and the movie starts to lose steam, the zingers and jokes come flying fast. One of the funniest moments is when Bob and Bing find that native hut full of drums. It's a great bass-riddled thundering parade of percussion but at the same time, the two are ripping each other's musical sensibilities doubling up the music and joke quota for the picture. Levels are spot on without any need for monitoring. 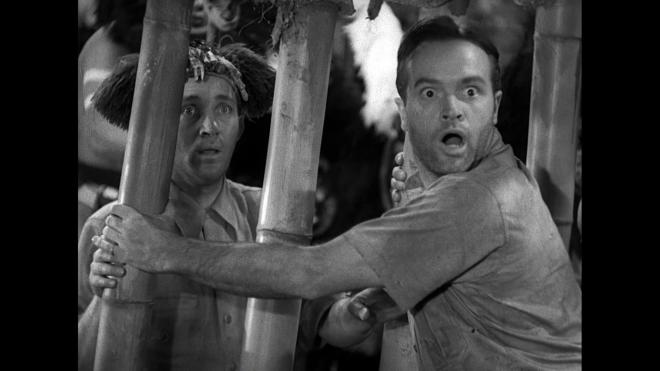 Road to Zanzibar comes with an okay assortment of bonus features. Considering some of the past releases were blessed with some solid audio commentaries I would have liked one here. The Bob Hope and the Road to Success is the same short archival bonus feature that's been included with virtually all of the Road releases from Kino. It's a fine piece but not very Zanzibar specific. The Command Performance 1944 is a nice little look at Bob Hope's career as an entertainer, but again, nothing earth-shattering to report. 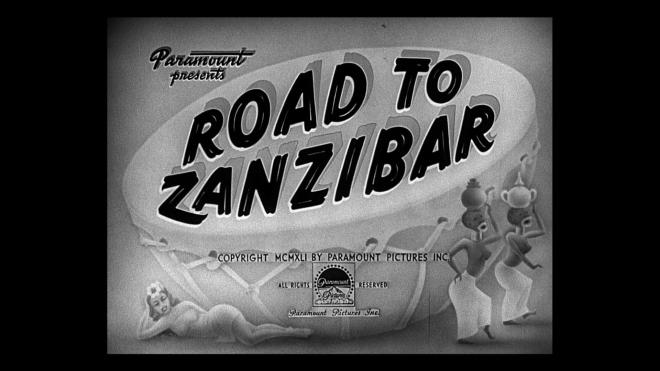 While Road to Zanzibar may not be the best of the Bing, Bob, and Dorothy Road films, it's still a hell of a great madcap song and dance comedy show. Even after watching so many of these films virtually one on top of the other, their antics never get tiring and after a long day at work and you need something to put a smile on your face, they never fail. Zanzibar has plenty of great gags and fast and furious comedy to make you laugh for 90-minutes.

Kino Lorber Studio Classics keeps the hits coming by delivering yet another great Blu-ray release with Road to Zanzibar. The image looks great for a film of this vintage and the audio is spot on. While I would have liked a more robust bonus features package, this disc is absolutely worth grabbing if you're a fan. Recommended.