Sang-hyun (Song Kang-ho) struggles with his place in the world. A priest, he's looked upon to provide guidance and direction when he has none himself. Desperate to feel worthy of God's plan, he signs up for a deadly vaccination experiment. At the point of death, Sang-hyun miraculously recovers in better health than ever. But his blessing is a curse when he learns he was given a blood transfusion from a vampire. Now with an insatiable thirst for blood, he falls in love and begins an affair with the wife of his best friend (Kim Ok-bin). 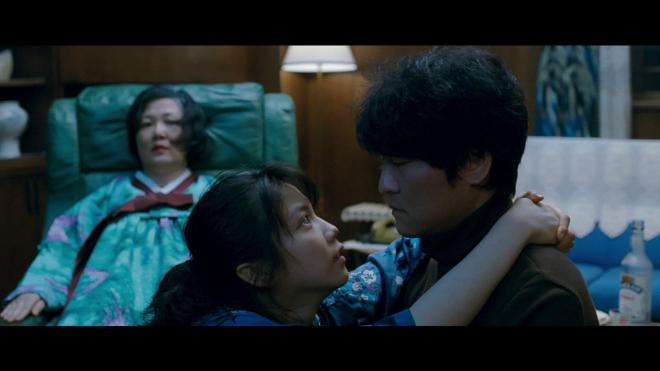 Park Chan-wook's films certainly aren't for everyone. The Handmaiden, Oldboy, and Stoker each have a unique way of getting under your skin. And just when you think you've seen everything the movie is going to throw at you, Park pulls out one more shocking curveball. Frank in their depictions of sexuality and violence - and the relationship between the two - you're either going to love the movie or run away from it. Thirst is no different. Maybe not one of his greatest and best overall - but the film is creepy and unnerving making it not only a solid vampire movie but a solid body horror film that treats the curse like an addiction.

Pacing is everything for this movie. If you're someone who enjoys simple horror with a lot of jump scares and some laughs, you're not going to find it in Thirst. If anything, Thirst plays more like the first half of The Exorcist - only without any obvious demonic presence for most of the film. At its core, the film is about a man struggling with his place in the world. To live God's plan he's given up every human pleasure, but when he finds his true purpose - as well as earthly pleasures he shunned - he has to live a life that contradicts everything he came to believe. This isn't to say there isn't plenty of bloodletting - there's more than enough of that to go around - it's just that traditional horror is not the film's first priority.

If there's a small gripe I have is that it doesn't quite know how to balance the erotic thriller and vampire horror elements. When Sang-hyun subjects himself to the vaccine experiment and it's a grisly grotesque segue into body horror with puss-filled growths protruding from his body. When he plays his flute and starts vomiting blood, you're full into an uncomfortable physical horror show that's extremely unsettling. This uncomfortable relationship with frank depictions of body horror continues in spurts and splatters right up until the love affair with Kim Ok-Bin's Tae-ju begins. While this relationship shouldn't be all that shocking if you're familiar with Parks' previous efforts, it's the shift in tone that is a bit jarring. But then it wouldn't be a Park film if it wasn't at least a little bit unsettling, would it?

While not my favorite, I still quite enjoy this movie. It's not one you break out every day, but it's a film I love to watch. With great performances and amazing cinematography, there's an elegant beauty to the horror on screen. It has been some time since I last saw the longer Director's Cut, but I remember it feeling like a fuller film. It's not that there's a lot more gore, it amounts to more scene extensions that fill the pace better. Small moments get to breathe a bit more and hit their impact points. You can import a Region-Free disc from Korea, but it'd been nice if Kino had been able to offer that version with this release as well. Just the same, it's great to have this film readily available in North America in 1080p, even if it's the shorter version.

Thirst drains Blu-ray blood in a single disc release courtesy of Kino Lorber and their Studio Classics label. Pressed on a Region A BD-50 disc, the disc is housed in a standard Blu-ray case. The disc loads directly to a static image main menu with traditional navigation options. 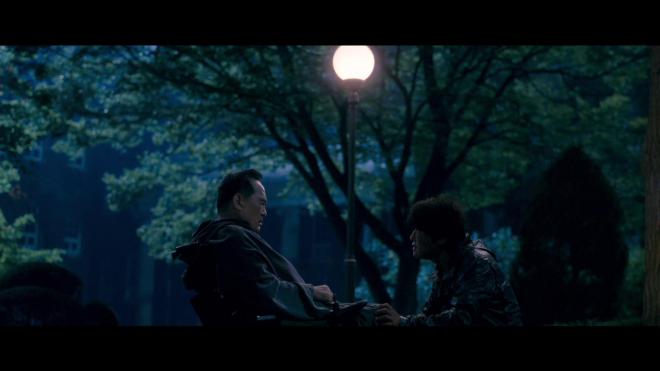 When I lived in Chicago I used to help out at a local rental shop that was fortunate enough to have the Region Free CJ Entertainment release of the Director's Cut. This 2.35:1 1080p transfer is a bit different than that release. I don't have access to that disc to offer up comparison images so I'm working against memory.

I remember the CJ Entertainment release having a warmer/yellow presence where this transfer echoes the US DVD presentation's cooler bluer colors while still maintaining a striking primary presence. I don't have any info available to say which is Parks' preferred color timing or transfer, so I can't grade this presentation on that scale. I will say I think this presentation is appropriately moody, dark, and damn beautiful to look at!

While I don't have any information about the vintage of this transfer, I'd have to say it's a pretty damn good looking flick. Film grain is readily apparent without being too noisy. There isn't any sign of troublesome DNR as fine facial features and fleshy details are often striking throughout. Black levels are fairly solid all around, there are a few moments where things move from nice deep inky black to a very dark mocha-brown, but thankfully there aren't any crush issues to report. Reds and Blues have a lot of play - crimson blood red is a notable highlight for obvious reasons. Whites are well balanced without any blooming issues. Free of any scratches or speckling, this transfer looks great. 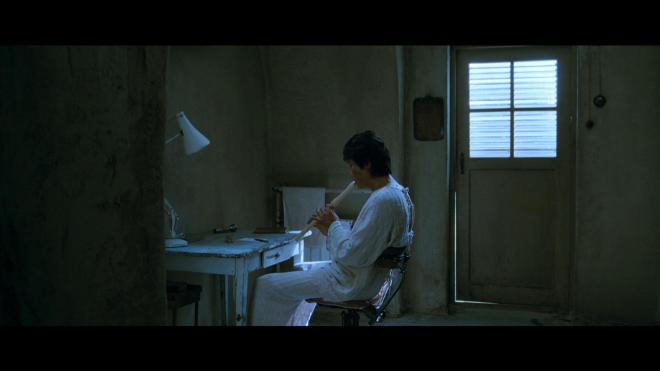 Thirst benefits from a strong Korean DTS-HD MA 5.1 mix with English Subtitles. As a slow-burn horror feature, the film makes the best use of dialogue and quiet atmospherics to set the mood. There isn't a lot of action set pieces to light up your surround channels. Instead, you can expect the soundscape to be filled in by subtle directional effects, dialogue, and the film's moody score to fill the scene. To that end, there isn't a whole lot of notable rear activity, but the front/center/side channels keep things active and engaged. Puncture sounds get a particularly notable squishy sound and any bloodletting is a distressing effect - again that flute sequence early in the movie is a highlight for the eyes and ears. Other sequences are appropriately breathy. All around this is a clean and effective mix, it may not be the most dynamic, but for the pace and tone of the film, it executes beautifully.

Also included is a Korean DTS-HD MA 2.0 mix, which is pretty solid on its own, but doesn't offer that dynamic atmosphere the 5.1 track has to offer. It's pretty great for listening with headphones and I tried it out on an old soundbar I rigged up in my office and it was engaging enough. If you've got the setup, keep with the default 5.1 track - it's much more rewarding. 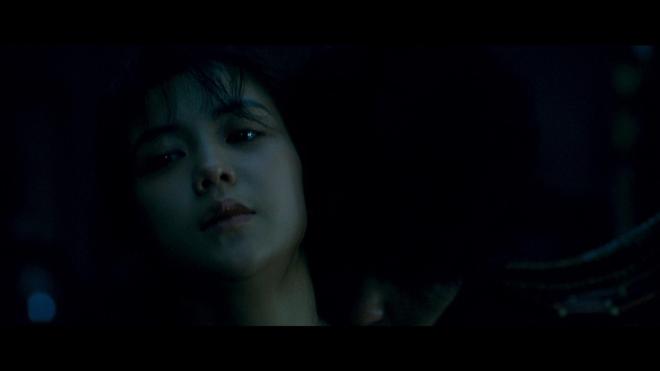 Bonus features for this release of Thirst are a bit on the slim side with a new Audio Commentary doing most of the heavy lifting. This disc also includes KLSC's traditional collection of similarly-themed trailers. The commentary is a solid listen overall, but not something to get too crazy excited about. 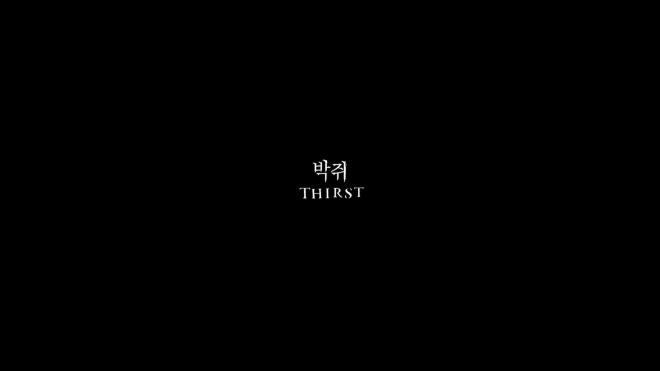 Thirst is one of those horror movies that I would hope every genre fan would enjoy, but I know it's just not for everyone. The pace is methodical but if you give it the time to let its wheels get going, there's a lot of fresh blood in this vampire flick. If nothing else, it reconfirms Park Chan-wook's ability to stage beautiful scenes composed of shocking images.

Kino Lorber Studio Classics brings Thirst to Blu-ray for the first time in North America with solid results. The image may differ slightly from foreign releases, but this is a beautiful looking transfer that's buttressed by a moody and atmospheric surround track. If you've been waiting for a North American release of Thirst, this is a hell of a release - even if it's missing the longer Director's Cut. Highly Recommended.

Sale Price 19.99
List Price 29.95
Buy Now
3rd Party 19.98
In Stock.
See what people are saying about this story or others
See Comments in Forum
Previous Next
Pre-Orders
Tomorrow's latest releases