Landmark anime film Perfect Blue dissects the psychological torture present in the exploitative “pop idol” industry through the experiences of one girl looking for fame. Satoshi Kon’s celebrated thriller is a disorienting puzzle that finally makes the leap to Region A Blu-ray. GKIDS and Shout! Factory deliver a solid A/V presentation for this 20th Anniversary Remastered Edition coupled with a bevy of special features carried over from previous releases. While Perfect Blue may not get the perfect Blu-ray this time around, it's still Highly Recommended. 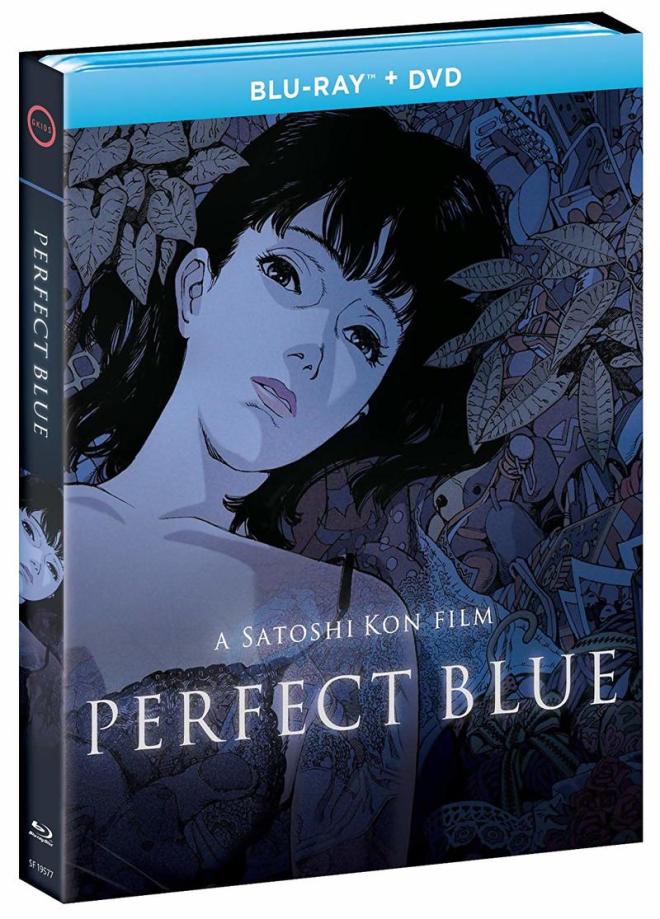 Early on in Satoshi Kon’s 1997 debut feature, Perfect Blue, there is a moment that lights the spark on the film’s theme of paranoia. As pop idol singer Mima is getting into her car adoring, fans clamor for a photo. “I’m always watching Mima’s Room!” one fan shouts, causing her to pause with a haunting expression. Filled with many small yet significant moments like this one, Perfect Blue is a wholly disorienting experience fueled by paranoia and delusions both subtle and sadistic. I highlight this specific moment because it’s the calm before the storm. A pause that signals something is about to tip the scales for a young pop idol.

The film opens on Mima during her last performance with the group CHAM!. Pressured by her agents, Mima leaves the pop group in pursuit of an acting career and stuns her fans. She lands a small role on a recurring drama called Double Bind. While shooting a scene, her manager Mr. Tadokoro opens a piece of fan man that violently explodes. Her agent Rumi, an ex-pop idol singer, shrugs off the incident while installing internet at Mima’s tiny apartment. She checks out the blog called “Mima’s Room” which is written by an obsessed fan posing as her.  Double Bind’s writer and producer take advantage of Mima’s innocence and film a brutal rape scene which they justify as a means to develop her character. Mima’s manager and agent aren’t pleased to see her treated this way but see the inevitable course for a young woman to make it on TV. This intense rape scene causes a rift in Mima’s psyche. She begins to lose sense of time as events recycle through her mind. Scenes from the tv show blend into her life and vice versa. As a series of violent murders occur Mima begins seeing a ghostly doppelgänger that looks like her old CHAM! persona.

Satoshi Kon’s debut feature, Perfect Blue, is a powerful trip into insecurity, paranoia, and self-doubt through the lens of the exploitative and artificial pop idol industry. Following Mima through the dizzying array of realities, we’re trying to constantly find solid footing in the complex narrative. However, the momentum rarely allows us to stop for a breather lest we see something in the shadows kicking off yet another tumble down the rabbit hole. Scenes effortlessly bleed into one another while Mima loses her grasp on reality. Kon’s firm handle on the story allows the ugly aesthetic of fandom and the psychological toll taken on Mima to never veer into a depressing free fall. There is a beacon of hope inherent in Mima that gives the audience confidence that the story will end well for her. I’ve seen the film a few times now and I am still shocked at how well an animated feature barely 80 minutes long can achieve so much.

It’s difficult to watch Perfect Blue in 2019 and not see the immediate connections with our social media culture. Those at the highest levels are essentially “famous for being famous,” their lives bought and sold through branding or corporate associations. To be an idol is to perform a non-stop service to devoted fans aching for some stability in their lives. The Instagram life is no different, acting as another premium delusion with an avatar. From social media feeds to socially relevant anime of the mid-’90s, the theme here is the duality of identity. Who we are and how we identify ourselves versus a fictional persona which relies implicitly on the approval of complete strangers. Kon’s film asks the question “What happens when our personas want to replace us?”

A trippy and multilayered story, Perfect Blue is an intense film that isn’t for the timid. As a reminder, this specific release is the unrated uncut Japanese version that contains a graphic rape scene, nudity, and grisly violence. Little is ever fully revealed, leaving audiences wondering just where reality and fantasy meet until the bonkers third act leaves you speechless. Though released in the mid-'90s, it's just as relevant now in the age of social media as it was during the dawn of the internet and fan blogs. Today everyone is an “idol” to someone somewhere. And everyone is now an audience. Terrifying, right?

GKIDS and Shout! Factory present the 20th Anniversary Edition of Perfect Blue on Blu-ray in a two-disc Blu-ray + DVD set.  Pressed onto a Region A BD-50 disc the two discs are housed in a standard two-disc keepcase with identical slipcover artwork. The disc opens to the GKIDS logo before landing on the static Main Menu screen with typical navigation options. 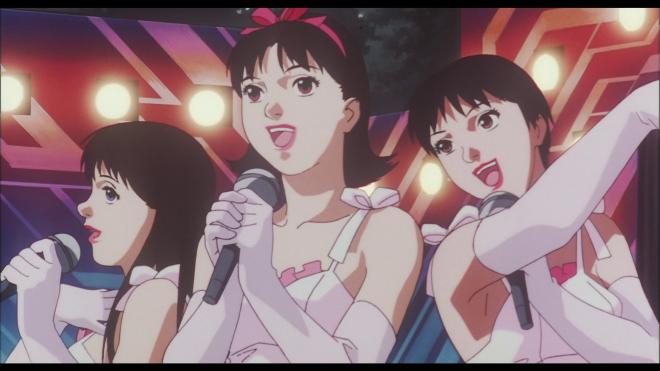 The uncut and unrated Japanese cut of Perfect Blue arrives on Region A Blu-ray thanks to GKIDS and Shout! Factory in an AVC encoded 1080p transfer with an aspect ratio of 1.85:1.

Overall the transfer leans soft but retains solid black levels. The color palette is muted but primaries pop when needed like the blood spray during the vicious murders. Saturation isn’t strong but looks great given the limitations of the animation at the time. Elements appear in solid shape with no discernible damage, save for a few specks here and there. The animation is jittery at times with image wobble apparent. The animation style sells the duality of our character’s world with real people appearing flawed and asymmetrical yet idols and performers are drawn flawless with clean lines and coloring. It’s not something you notice immediately but on repeat viewing these elements heighten the experience further.

Compared to the previous Region 1 DVD releases, this 20th Anniversary Remastered Edition looks fantastic! Unfortunately, due to the film being made with hand-drawn cel animation, there is a limit to how well this image can be presented without a total restoration. Those seeking out international HD releases of the film will find a similar visual presentation. It’s one that could benefit from a 4K scan down the road; 30th-anniversary edition, perhaps? 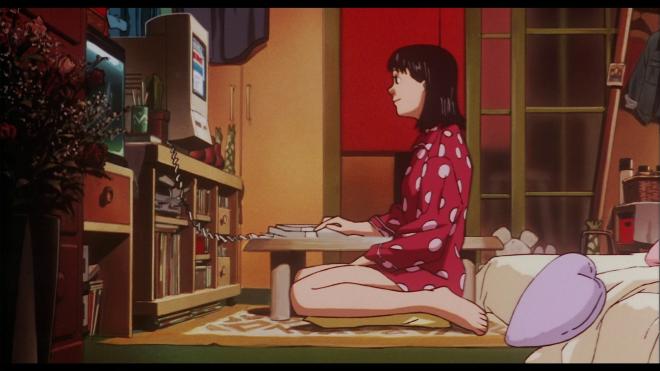 The Remix track is the only lossless option here and arguably the best audio track for the film. Atmospherics and surround elements envelope you as Mima’s tumbles down the rabbit hole. Dialogue is clearly heard and accurately presented no matter which audio track you choose. Not into reading subtitles? The English dub track is surprisingly good! Purists will love the original Japanese mono track included here as well.

Subtitle options include English, English SDH, English for Songs and Signs Only. 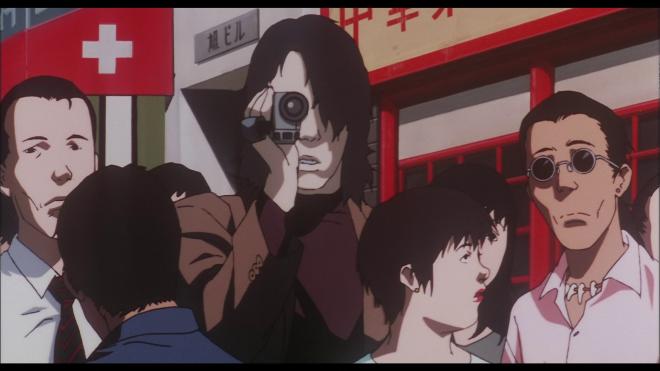 GKIDS and Shout! Factory put together a great set of bonus features for this Blu-ray release, which includes nearly everything from the Region 1 DVD release except for the director’s commentary track. The highlight of the special features is easily the 41-minute lecture with Satoshi Kon. 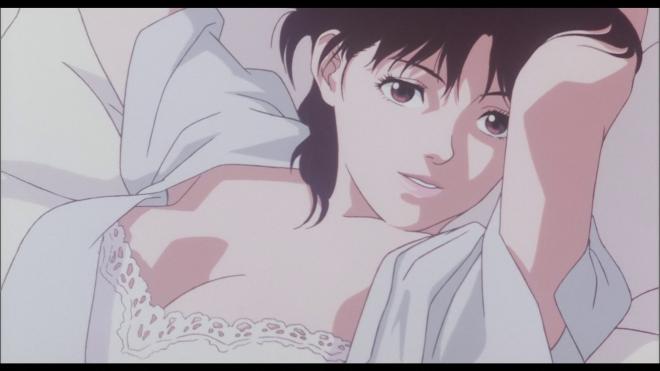 Satoshi Kon’s psychological thriller Perfect Blue slots into our social media landscape in which we’re constantly interacting with fictional personas. It captures so efficiently the paranoia and crippling self-doubt of someone treated as a product for millions of obsessed fans. Kon created a unique and unsettling work that transcends the bounds of conventional anime filmmaking. GKIDS and Shout! Factory have crafted a stellar release for Perfect Blue with a solid A/V presentation and a selection of special features worth checking out. Highly Recommended for anime fans and cult cinema collectors.

Sale Price 17.96
List Price 26.99
Buy Now
3rd Party 29.95
In Stock.
See what people are saying about this story or others
See Comments in Forum
Previous Next
Pre-Orders
Tomorrow's latest releases