It's interesting to point to a particular film in the rise of two actors during the upswing of their careers. 1993's Kalifornia starring Brad Pitt and David Duchovny about a pair of yuppies on a road trip with a psychopath and his girlfriend marks early entries in their careers just when they were truly breaking out and becoming famous in their own respective spheres of entertainment. The film remains a creepy and often unsettling thrill ride over 25 years later! Shout Select delivers a Collector's Edition release that for the first time gives both the Theatrical and Unrated cuts with solid A/V presentations and a few worthwhile bonus features. Recommended.

"We gotta talk about your good buddy Early."

"Who says he's my good buddy?"

Yuppie reporter Brian Kessler (David Duchovny) and his photographer girlfriend Carrie Laughlin (Michelle Forbes) are stuck in the mud with their respective careers. Brian ain't making it as a reporter and Carrie can't get a gallery to show her sexually explicit photographs. But Brian has a book about serial killers he owes a publisher. The two plan a cross-country trek to California to visit infamous murder sites, write, and take pictures. Problem is they're out of money. To ease the financial strain they bring along two seemingly simple-minded country bumpkins Early Grayce (Brad Pitt) and his girlfriend Adele (Juliette Lewis). Brian and Carrie are about to get first-hand experience with a serial killer with Early's sadistic and murderous habits come to light. 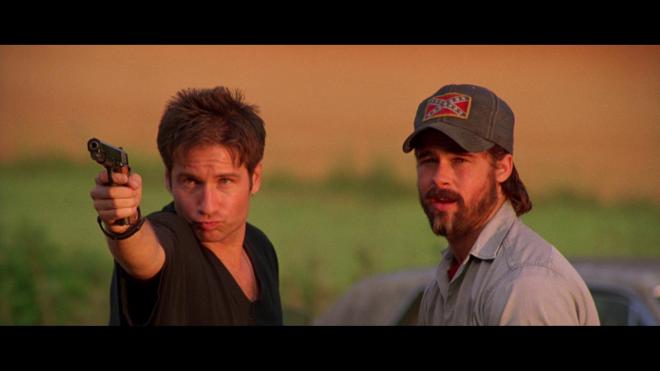 Growing up, my older sister was obsessed with Brad Pitt. The man could do no wrong in her eyes as she fawned over iffy flicks like Johnny Suede to accent her repeated viewings of Thelma & Louise and A River Runs Through It. Being the younger brother vying for my own movie watching time, I had to regularly endure a Brad Pitt feature or two before I'd get to watch what I wanted. While I wasn't always a fan of his, Kalifornia was the film that proved to me the man had impressive range and could deliver a creepy character when he was allowed to just go full out. I was able to love him in 12 Monkeys because he's so damn good in Kalifornia. On top of that, this flick showcased The X-files Agent Mulder himself, David Duchovny. I had no idea what I was getting into when I sat down to watch it, but damn it all Kalifornia is a fun flick.

I love serial killer flicks and I love pot-boilers - and Kalifornia is both rolled into one. I love how very slowly director Dominic Sena paces the film and rolls out Early's murderous side giving you only small teases of the horror to come. After the opening sequence with a car on a bridge, the film is pretty much crickets for about 30 minutes. Then Early is put in the position of having to kill a man in a bathroom to pay his share of the gas. You knew that scene was coming. It was set up long before that moment that Early and Adele were flat broke. But I didn't expect that first murder to be as shocking and intense as it was! Even after several viewings it's still unsettlingly brought to life by Pitt forgoing the pretty-boy image that had been cultivated for him up to that point and just going full out insane and sinister.

If the serial killer element wasn't enough, Kalifornia relishes its pot-boiler structure as the close-proximity relationship between Early, Adele, Brian, and Carrie comes to a head. Michelle Forbes is fantastic as Carrie, the lone voice of reason. She knows quickly this situation is bad and was only going to get worse. Duchovny is great as the blinded optimistic pacifist who can't see the forest for the trees when clear and obvious warning bells are sounding. By the time he's starting to suspect that Early is out of his gourd, it's too late to stop the freight train. Kalifornia may be Pitt and Duchovny's movie, but I've always felt Juliette Lewis never got enough appreciation for her turn as Adele. She's the one true innocent in the film always wanting and only willing to believe in the best making her character's trajectory the only truly tragic one in the film.

It had been some time since the last time I saw Kalifornia in full, I think I rented the Blu-ray, so it was great to reconnect with it. I love it for all its 90s swagger and remains a solid entry in the often bloated serial killer thriller genre. It's probably because Brad Pitt was in Se7en that I feel like this flick gets overlooked. If you've never seen it, glanced at it on a shelf, or if you simply haven't watched it in 26 years - this Shout Select release is the perfect time to give it another look!

Kalifornia hijacks a new Collector's Edition Blu-ray release from Shout Select in a two-disc set offering the original (but not much shorter) Theatrical Cut for the first time on Blu-ray. Each cut of the film is pressed on a Region A locked BD-50 disc and are housed in a standard two-disc case with identical slipcover artwork. The case offers reversible artwork reminiscent of the original theatrical poster. Both discs load to an animated main menu with traditional navigation options. 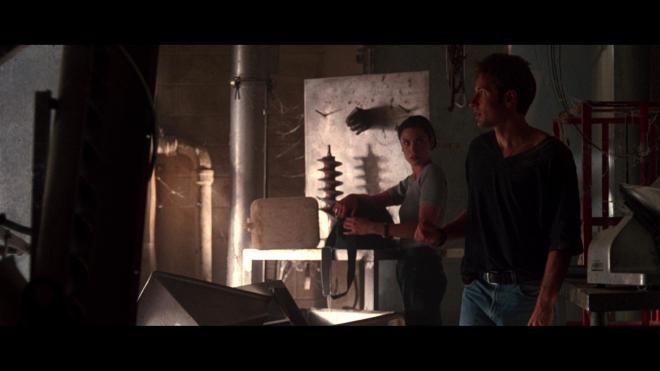 While my memories of the first Blu-ray release of Kalifornia are admittedly a bit hazy, I'd have to wager that the 1080p 2.35:1 transfers supplied for both the Theatrical and Unrated Cuts were likely culled from the same source elements as the 2010 release. Which isn't a bad thing necessarily, just that it's not as refined as what a more modern 2K or 4K scan would probably have to offer.

Elements are in great shape without any sign of age-related wear or tear. Film grain is always apparent, but never too intrusive to be noisy looking giving the image a nice filmic quality. Details are robust in close up and middle shots. Establishing shots can appear a bit soft and there are some darker scenes peppered throughout the film that appear oddly softer than adjoining shots. Colors are robust offers plenty of primary coverage with reds getting a rather obvious amount of attention considering the viscera on display.

Black levels can be a tad bit iffy here and there as they can veer from being the nice desirable inky black and dip into dark brown. Thankfully the image maintains a sense of depth and dimension as there is still plenty of shadow separation. Really my small gripes are only slight issues that don't really detract from the experience. A fresh scan probably would be better, but this master is still recent enough to impress. 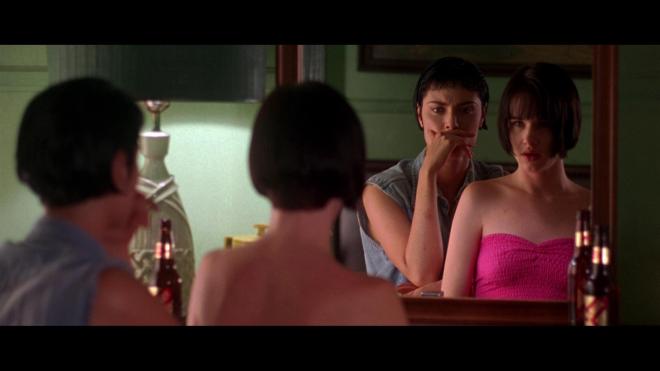 The last time I saw the original Blu-ray for Kalifornia was before I had a decent audio setup so I can't use that memory as a basis of comparison for the DTS-HD MA 5.1 mix supplied here. I will say that what's been made available for both the Theatrical Cut and the Unrated Cut is solid stuff. There is a decent surround presence - maybe not as purposefully nuanced as one may like but still effective. It really comes to life during key sequences like the bathroom stabbing and the film's final third when the action really picks up and you have an intense combination of dialogue, Carter Burwell's score, booming gunshots, and some nice squishy effects. The whipping winds in the deserted model homes give a nice creepy bit of atmosphere as well.

Also included are DTS-HD MA 2.0 stereo tracks for both cuts. They're fine. I don't really have that strong of an opinion because they're basically doing the same workload as the 5.1 mix just with fewer channels. They're effective without overt softness or level issues but they do lose the extra spacing and accenting the full 5.1 track offers. Truthfully you can't go wrong with either one, but I favor the 5.1 track for this go around. 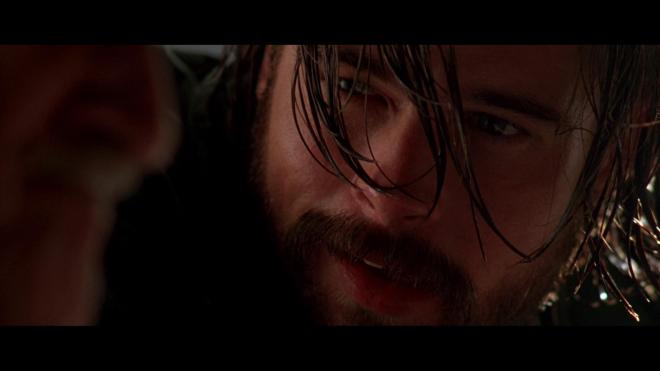 Bonus features may not be the most robust assortment, mostly old behind the scenes material, but the new Dominic Sena interview is pretty great as he gets to discuss the making of the film as well as his early career working with Fincher on commercials and music video - also hiring guys like Michael Bay and Antoine Fuqua. I would have loved a commentary track, but this is still pretty great.

Kalifornia hitches a ride onto Blu-ray for the second time in a Collector's Edition release from Shout Select. This early 90s thriller about a pair of yuppies writing a book about serial killers unknowingly traveling with a killer and his girlfriend still holds up remarkably for a film aging over 25 years. It's still got plenty of thrills and chills and a completely unhinged Pitt trying to break out of his built up pretty-boy image at the time. Shout Select delivers a solid release offering up the Unrated Cut and, for the first time, the Theatrical Cut on Blu-ray. The A/V presentation may be dated but it still looks very good and sounds great. Bonus features are a tad slim, but they're still worth picking through. Recommended.

Sale Price 18.29
Buy Now
3rd Party 17.9
In Stock.
See what people are saying about this story or others
See Comments in Forum
Previous Next
Pre-Orders
Tomorrow's latest releases