Overview - Nominated for 4 primetime Emmys, Sherlock is back with Benedict Cumberbatch as Holmes and Martin Freeman as Watson in three new stories. In A Scandal in Belgravia, Sherlock gets embroiled in the complex plans of the dangerous and desirable Irene Adler, and finds himself employing every one of his remarkable skills to survive as the unlikely duo square off in a battle of wits…and perhaps emotions? The Hounds of Baskerville whisks the increasingly popular detective and Watson to the wilds of Dartmoor, and face to face with the supernatural lurking in the eerie landscape. Meanwhile, Moriarty is still out there in the shadows, and is determined to bring Sherlock down—at whatever the cost—in The Reichenbach Fall. With beguiling performances, witty scripts and some of the most intriguing characters ever created, it’s no wonder that Sherlock has proven to be a worldwide success.
OVERALL
Highly Recommended 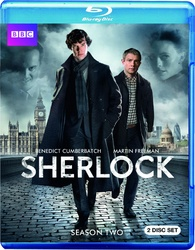 I don't watch 'Sherlock' when it airs on PBS simply because I want to wait for the Blu-rays to come out. I want to be able to sit down and watch them all at once. I hate to be left hanging at the end of these episodes because they're just too good. I couldn't wait the allotted time for the next episode to air. Although, the wait for the Blu-rays is just as excruciating. I've been waiting to find out how John Watson (Martin Freeman) and Sherlock Holmes (Benedict Cumberbatch) escape from Jim Moriarty's (Andrew Scott) clutches at the end of the first season.

The second season picks up right where the first left off. Sherlock holds a gun and is about to shoot the bomb vest that was strapped to Watson. Moriarty cackles. We know that for there to be a second season that somehow Holmes and Watson escape from this situation. They do, but I won't tell you why or how. That, you'll have to watch yourself.

The second season features three 90 minute episodes, just like the first season. The first episode, "A Scandal in Belgravia" is tailored to carry on as a passage from the first season to the second season. Another well-known character from the Holmes universe is introduced. Irene Adler (Lara Pulver) is a dominatrix who stays safe by collecting secrets from her clients who are usually people that are extremely important government figures. Sherlock is recruited by his brother Mycroft (Mark Gatiss) to find her and a the pictures she claims to have of a high-ranking, but anonymous member, of the royal family.

The first episode really sets the tone for the rest of the season. Holmes is gaining popularity in the media as people start becoming familiar with the amateur detective who can solve crimes much faster and more effectively than the police. Watson's blog, about their cases, is becoming more and more popular with each case they solve. Holmes is annoyed with the attention.

You can feel Holmes becoming meaner this time around. The more attention he gets, the more closed off he becomes. Holmes is still obsessed with himself and any sort of knowledge that would be helpful in solving crimes. Cumberbatch plays him perfectly. His outward demeanor is calm; most of the time, but inside he's frantic with emotion. Always trying to hide any sort of sentiment. At one point Watson jokes that Holmes probably has Aspergers, he's probably not that far off.

The second episode, while it builds a little on the story of Moriarty's master plan, is sort of a standalone episode based on the Sherlock Holmes tale "The Hound of the Baskervilles." In this version of the story the title has been slightly changed to "The Hounds of the Baskerville." It's a tiny change, but one that makes sense as soon as you realize what's going on. It's all leading up to the third episode though. An episode that feels somewhat familiar to the season one finale, but has much more Moriarty to give it a leg up.

Moriarty's master plan commences and it's a devious plan indeed. One of the real treats of the series is how Andrew Scott plays Moriarty. What would Sherlock be like if he wasn't on "the side of the angels" as Moriarty likes to say? Scott's portrayal is one-of-a-kind. He's a devious criminal mastermind, but he demeanor would reflect someone who would be better off in a padded room and straightjacket. At times he almost reminds me of Heath Ledger's Joker. He's not as overtly scary, but the wheels turning in his malicious head are just as dangerous.

I continue to be amazed by this show and its ability to create such a slick, modern world surrounding such an old-fashioned character. I admit when I first heard about the show, a couple years ago, I couldn't help but think they were just going for a gimmick. "Sherlock Holmes in modern times," seemed as gimmicky as they come, but writers and creators Steven Moffat and Mark Gatiss have side-stepped the dreaded gimmick and have created an entirely natural universe in which Sherlock Holmes can exist. It's one of my favorite television shows going today.

This BBC release is a 2-disc release with both discs being 50GB Blu-ray discs. They come packaged in a standard Blu-ray keepcase.

The show is presented in 1080i. Like another BBC show, 'George Gently' it's hard to tell. The difference between 'Sherlock's 1080i and a 1080p presentation is negligible. Like 'Gently', 'Sherlock' has some trouble rendering rod-iron fences and tightly woven textures like the one on Sherlock's overcoat. Those kinds of things shimmer on and off during the entire season.

Besides shimmering, the rest of the presentation looks flawless. I absolutely love the way this series is shot. It looks and feels like a movie. Faces have the utmost detail. Individual pores are visible during close-ups. The architecture of London offers a visceral surrounding that is always changing and always presented clearly. From the worn cobblestone of the street leading to apartment 221B to the ultra-modern facilities of downtown London, everything looks perfectly natural and wonderfully beautiful.

Colors are strikingly clear. Edges are precise. Shadows are perfectly inky. There's a scene were Watson is perfectly silhouetted and the outline of his silhouette is flawlessly imposed against a dark backdrop. Even with the dark backdrop it's easy to see Watson's silhouette sneaking along in the darkness. There is no crushing to speak of, simply great looking shadows that add character and mood to the proceedings. If you loved the way the first season looked, this one matches it in every way.

Now the audio is a little disappointing. Like season one, we only get a Dolby Digital 5.1 surround sound track here. There's still no lossless audio which is a real bummer. This show is so full of great original music and bristling sound effects that it screams for the lossless treatment, alas we must be happy with the Dolby Digital track that we've been provided.

Having said that the track doesn't come across half bad, it just doesn't have the oomph or resonance a lossless track might have. Surrounds do contain quite a bit of action, but it always seems a little light. LFE seems light too even though the original music calls for a lot of bass.

Dialogue is most always clear, but sometimes Holmes' crazy ramblings do get lost in the soundfield. There's a part where Holmes breaks a code in an email in about eight seconds and he rattles off so much information that it's hard to follow what's going on especially when it seems to blend together. I had to turn on the subtitles to get everything he said in that scene. I'm not really sure why 'Sherlock' doesn't get the lossless treatment, but it's sorely needed.

This is a perfect reimagining of the iconic detective. It could've come across gimmicky, but it doesn't. It wholeheartedly works and the actors chosen to embody these historical roles sell the premise. Even though Cumberbatch and Freeman are the big stars, it's Andrew Scott who steals the show with his manic, but malevolent portrayal of Holmes' brilliant nemesis. The show looks great on Blu-ray but I really wish we could get some lossless audio. There are a few nice commentaries for fans which should spice up this set just a bit. Overall this show comes highly recommended simply because it's such great television, lossless audio or not.

Sale Price 29.12
List Price 39.98
Buy Now
3rd Party 22.19
In Stock.
See what people are saying about this story or others
See Comments in Forum
Previous Next
Pre-Orders
Tomorrow's latest releases