A Christmas present for classics fans who missed out on the limited 2013 Twilight Time release, Oliver! returns to Blu-ray in time for its 50th anniversary. This Oscar-winning musical adaptation of Charles Dickens' chronicle of an orphan boy's struggle to survive in Victorian London remains a family-friendly treat that's perfect for holiday viewing. Excellent video and audio transfers and a nice selection of supplements enhance this welcome reissue. Highly Recommended.

Strangely enough, during the turbulent and rebellious 1960s, when civil rights protests, political and social unrest, and anti-establishment views pervaded our culture, the innocuous movie musical dominated the Academy Awards, winning Best Picture a whopping four times over the course of the decade. (Even more incredible, that's just one award shy of the total number of top honors the musical received in the preceding 33 years of Oscar history.) West Side Story (1961), My Fair Lady (1964), The Sound of Music (1965), and Oliver! all took home the coveted gold statuette, and such noteworthy favorites as The Music Man (1962), Mary Poppins (1964), Doctor Dolittle (1967), Funny Girl (1968), and Hello, Dolly! (1969) also nabbed Best Picture nominations. That's quite a haul for a genre often dismissed as insipid and shallow. Yet the musical has always bolstered audience morale by providing escapist entertainment during such trying times as the Depression and World War II, so maybe it was fitting to finally acknowledge the form's contributions during one of our nation's most difficult periods. Unfortunately, all the adulation may have incited a backlash, for after the victory of Oliver!, 34 years would pass before another musical - Chicago - would be named Best Picture. Such are the fickle ways of Oscar.

Still, in a year when the Vietnam War raged out of control and assassins gunned down both Martin Luther King, Jr. and Robert F. Kennedy, selecting the largely cheery Oliver! as Best Picture seems at once odd and understandable. Odd because its singing street urchins, cartoon villains (Fagin and Mr. Bumble), and heart-of-gold prostitutes paint a rose-colored portrait of society's underbelly at a time when tolerance for such sugar-coating was at a particularly low ebb, yet understandable because the film distracted the public from the serious issues of the day and, through its ebullient musical numbers and inspirational story, gave us hope that good really could triumph over evil. Sir Carol Reed's film certainly brandishes a dark and disturbing edge during its second half, with the horrifically menacing Bill Sikes symbolizing the distrust, paranoia, anger, and violence that permeated both mid-19th century England and mid-20th century America, lending Oliver! a relevance its fellow nominees - Funny Girl, The Lion in Winter, Rachel, Rachel, and Romeo and Juliet - lacked.

Oliver Twist is arguably the most renowned orphan in all of literature, and his signature line - "Please, sir, I want some more" - is legendary. Yet after he makes that audacious request to the austere and sadistic wardens of the workhouse where he's incarcerated, Charles Dickens' plucky, pint-sized hero begins an arduous journey to find some semblance of home and family. A chance encounter with a spritely pickpocket named The Artful Dodger (Jack Wild) leads Oliver (Mark Lester) deep into London's bowels and into servitude to Fagin (Ron Moody), the patriarchal leader of a youthful gang of thieves. Soon, though, in typical Dickens fashion, a bit of coincidence and serendipity changes Oliver's fortune, but his newfound prosperity doesn't sit well with Fagin's grown-up henchman, the maniacal and sociopathic Bill (Oliver Reed), who fears exposure. Bill conspires to kidnap Oliver from his benevolent benefactors to keep him from talking, a plot that outrages his devoted girlfriend, the maternal Nancy (Shani Wallis), who risks her own safety to protect and rescue the young boy.

Dickens wrote Oliver Twist as an indictment of the exploitation and abuse of underprivileged children, who were often treated as slaves in deplorable workhouses and victimized and ignored by a society that refused to take responsibility for them. Reed's film touches upon these potent themes, but the musical nature of the piece softens the sting. A nostalgic quaintness defines this vision of London at the dawn of the Victorian Era, as the movie concentrates more on the fairy tale aspects of Dickens' novel than its social commentary. Though it's impossible to ignore the undercurrent of depravity that courses through Oliver!, there's something innately cute and endearing about dirty-faced ragamuffins picking the pockets of gentleman dandies, and the film does little to quash such an attitude.

Composer Lionel Bart, whose infectious score includes several classic melodies (Where Is Love, As Long as He Needs Me, Food Glorious Food, and Who Will Buy? among them), often diffuses the gravity of these situations (Sweeney Todd this is definitely not!), and his bouncy tunes tend to derail the narrative rather than enhance it. Abuse and violence still had to be dealt with delicately in 1968, and the screenplay by Vernon Harris integrates those elements into the musical's rigid confines as well as it can. If produced today, Oliver! would undoubtedly adopt a more serious air, but the production wins points for its shift toward darkness during its latter stages. Reed, whose best known movies are thrillers like the immortal The Third Man, infuses Oliver! with plenty of effective film noir accents that heighten tension as the drama nears its climax. He also eschews any sort of musical finale in favor of a low-key ending that wisely spotlights character and thematic elements and gives the movie a lovely resonance.

The use of unknown actors adds authenticity to the film, and all involved file vivid, dimensional portrayals. Moody, who received a well-deserved Best Actor Oscar nomination, especially impresses as the greedy, manipulative Fagin, who grooms his orphan charges into criminals. Yet much like Dr. Frankenstein, Fagin unwittingly creates Bill Sikes, an out-of-control, rotten-to-the-core monster, played with explosive menace by a young Oliver Reed, nephew of the movie's director. As the benevolent, masochistic Nancy, Wallis is both tough and tender, and her rendition of the show's signature song, As Long as He Needs Me, radiates with power and warmth.

As a kid (I was 6 when I saw Oliver! during its initial theatrical run), I remember loving the performances of both Lester and Wild. Wild's spirited work holds up well (the diminutive 15-year-old was nominated for a Best Supporting Actor Oscar), but Lester's portrayal is wildly inconsistent. He’s quite good in the dramatic scenes, but his vapid expressions during his songs devoid them of impact and often break the movie's mood. From the outset, it's obvious Lester's vocals are dubbed (musical director John Green pronounced the actor "tone deaf" and "arrhythmic"), and the reason they sound so odd is because they were dubbed by Green's 24-year-old daughter! The girly intonations emanating from Lester's mouth may explain why the boy looks uncomfortable and disinterested during his songs, but such a demeanor in a musical is unfortunate, to say the least.

Yet despite such lapses, Oliver! remains a terrifically entertaining, meticulously produced motion picture that brims with vitality and artistry and features more than a dozen memorable tunes. Nominated for 11 Oscars, the film won six: Best Picture, Best Director, Best Art Direction and Set Decoration, Best Sound, and Best Score, as well as a special honor for its outstanding choreography. Commercial and critical success usually eludes musicals with serious themes, but Reed's production is that rare exception that pleases on a variety of levels and appeals to a wide range of ages. Though the tale of Oliver Twist has been filmed no less than nine times from 1922 to the present, this is the most beloved and revered version, and it's doubtful that will ever change. 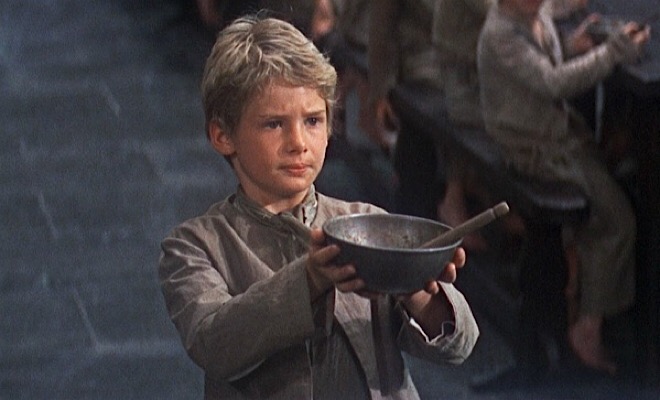 The official Sony release of Oliver! arrives on Blu-ray packaged in a standard case. Video codec is 1080p/AVC MPEG-4 and audio is DTS-HD Master Audio 5.1. Once the disc is inserted into the player, the full-motion menu with music immediately pops up; no previews or promos precede it.

The 1080p/AVC MPEG-4 transfer is the same one used for the 2013 Twilight Time release, and it’s a good one. The source material is bright, clear, and clean, with only a few errant specks dotting the print. Visible but not overly intrusive grain preserves the film-like feel, and solid contrast provides marvelous depth to such large-scale numbers as Who Will Buy? and Consider Yourself. A muted color palette properly predominates during the movie's bleak first half, but when Oliver's prospects improve after the intermission, so does the liveliness of the picture. Though the green lettuce and orange carrots of the London market add welcome punch to the picture early on, the Bloomsbury Square sequence substantially ramps up the hue quotient, as the red roses carried by the flower girls, the green grass of the common, and the crystal blue sky all combine to create a vibrant mise-en-scene.

Black levels are quite good, especially in the dank hovel where Fagin and his minions reside. Whites, however, really impress, from the copious snow early in the film to the bright exteriors of the Bloomsbury Square townhouses. Flesh tones remain true and stable throughout, and close-ups spotlight fine facial details well. In addition, background elements are easy to discern, shadow delineation is good, and while some noise occasionally afflicts solid portions of the screen (the intermission title card looks especially bad), it rarely distracts. As I said in 2013, this is the best Oliver! has ever looked on home video, so you shouldn’t hesitate to pick up this high-quality disc.

The audio is the same, too. The DTS-HD Master Audio 5.1 track infuses Oliver! with more sonic oomph than it's ever had, thanks to excellent fidelity and a striking depth of tone that beautifully shades the warm vocals and robust, Oscar-winning orchestrations. Though a significant volume boost is necessary to maximize the audio's output, once a comfortable level is reached, the track's subtleties and accents really shine through. Unfortunately, despite the mix's multi-channel moniker, almost all the sound is front-based, yet excellent stereo separation, which is immediately noticeable during the overture's initial strains, nicely widens the soundscape and adds sufficient aural interest.

Dialogue is a little dicey; I had trouble understanding both conversations and lyrics due to some nagging muffling. (Cockney accents and mumbled line readings don't help comprehension either.) A bit of distortion during the musical numbers disrupts their purity, but the dynamic scale remains wide enough to handle the soaring John Green score, which easily fills the room. Ambient effects, such as the creaking gears of the grist mill and chirping birds outside Oliver's Bloomsbury Square window, come across well, and any age-related hiss, pops, and crackles have been erased.

Most of the extras from the 2013 Twilight Time release are included here, with the exception of the isolated score track, sing-alongs, dance instructions, and dance-alongs. (No great losses, in my opinion.) A 2007 featurette that did not appear on the Twilight Time disc is the sole supplement addition.

If you missed out on the limited edition Twilight Time Blu-ray release of Oliver!, here’s your chance to pick up this classic, Oscar-winning musical. Distinguished by a terrific Lionel Bart score that features a number of instantly recognizable tunes and robust performances by a top-notch British cast, Oliver! rightfully earns its exclamation point and continues to be grand family entertainment a half century after its initial release. Sony’s Blu-ray presentation does the film proud with a sparkling transfer, solid lossless audio, and a varied array of supplements. Whether you're young or old, Oliver! will wend its way into your heart, and this multi-Oscar winner comes highly recommended.

Sale Price 22.99
List Price 24.99
Buy Now
3rd Party 22.94
In Stock.
See what people are saying about this story or others
See Comments in Forum
Previous Next
Pre-Orders
Tomorrow's latest releases