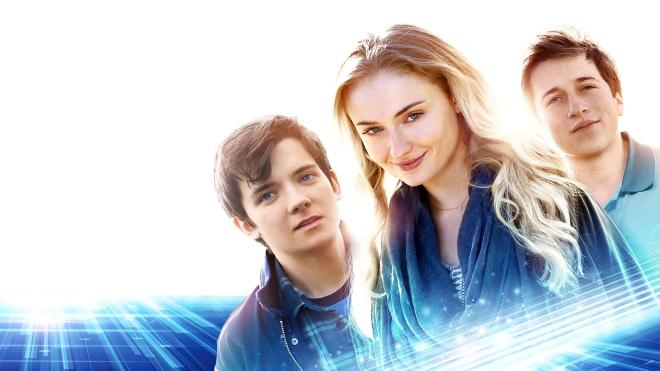 Young love and the perils of long-term romantic relations are examined through the eyes of Asa Butterfield and Sophie Turner in Time Freak - an earnest effort that falls just shy of an average YA story. While the story of a young physicist using a time machine to figure out where is relationship went wrong has its charms, the two leads don't have much chemistry and the film makes some obvious and predictable plot choices but it's a fun watch and the comedy elements hit their mark.  Lionsgate delivers Time Freak to Blu-ray with a solid A/V presentation with a decent assortment of bonus features. All in all, it's a decent little flick and worth watching. Worth A Look.

Everyone has moments in their lives where they wish they could have the proverbial "do-over." For the young physics hotshot Stillman (Asa Butterfield), he's going to get to live the mother of all mulligans in the crazy golf game of life. After his girlfriend Debbie (Sophie Turner) dumps him, Stillman cracks a theorem that has been plaguing him and invents a time machine - so he can fix all of the things that went wrong in his busted relationship. Enlisting the help of his stoner-pal Evan (Skyler Gisondo), Stillman aims to re-do every bad moment of his time with Debbie and prevent their breakup. 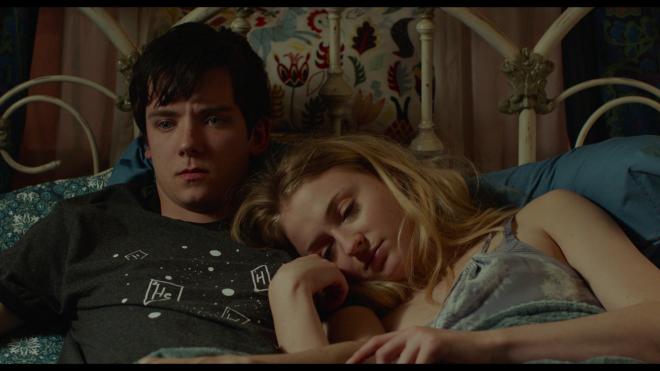 Based on his 10-minute Oscar-nominated short film, writer/director Andrew Bowler reinvents his romantic comedy as a feature film directed at the YA crowd of today. The story is an earnest examination of the perils of living in the past in the sacrifice of the moment. As Butterfield's Stillman tries to perfect the imperfect, he creates another mess down the road to the point that he's constantly having to spend years worth of time to fix tiny little moments. Eventually, our hero learns the folly of his ways and makes one last trip to undo all of the damage - where the film, unfortunately, makes the mistake of aiming for the "everyone's happy" ending that feels more like a cheat.

Another aspect that keeps this film from fully working is the casting of its leads. Asa Butterfield is great as the neurotic and awkward Stillman. Sophie Turner does a fine job as the carefree Debbie without becoming a Manic Pixie Dream Girl cliche. The problem is I never bought them as a couple. It felt as if the casting checklist stopped after "Young" and "Attractive." From the first time they meet through to their fights and breakups, I kept feeling like they were never right together. They do their best and both are great individually, just not great together.

That said, where casting got things right is with Skyler Gisondo as the ever-reliable Evan. He's funny and quick with the jokes without being annoying. He's earnest and devoted to his friends who make boneheaded decisions while actually learning a lesson and working to become a better person. By the end of the film, he's really the only character to be fully realized and has an arc that changes him as a person.

After looking at the quirky original short film that's included in the bonus features - I kinda wish the longer version didn't feel so shopped for a target demographic and had the same goofy character to it. I gotta say that YA may not have been the right course. Everyone wishes they could have a momentary do-over so to me the idea of it being a couple of 40-somethings and not necessarily even romantic would have made for a pretty wild comedy.

There aren't really any dramatic surprises as you're fairly certain throughout the film is gearing up for a relatively consequence-free happy ending. That's where it could have been brave and done something genuine with its themes. Things end. Life goes on. It's how you meet the end and move forward is what counts and I feel like this film easily could have hit those marks. The story map was there but it took the right turn to Obvious Town instead of going off-road.

Overall I did enjoy Time Freak. I had fun with it. I enjoyed seeing this cast play mature versions of themselves and the mechanics of the time travel were a unique twist even if they sidestep how it's all done. The comedy timing was a great accompaniment to the melodrama without the gags being stupid or moronically simple. Time Freak is a decent and entertaining movie at the end of the day, just not quite the great film it very easily could have been.

Time Freak arrives on Blu-ray courtesy of Lionsgate in a single-disc Blu-ray + DVD set. Pressed onto a Region A BD-50 disc, the disc is housed in an eco-friendly case with identical slipcover artwork. The disc loads to trailers for other upcoming Lionsgate releases before arriving at a static image main menu with traditional navigation options. 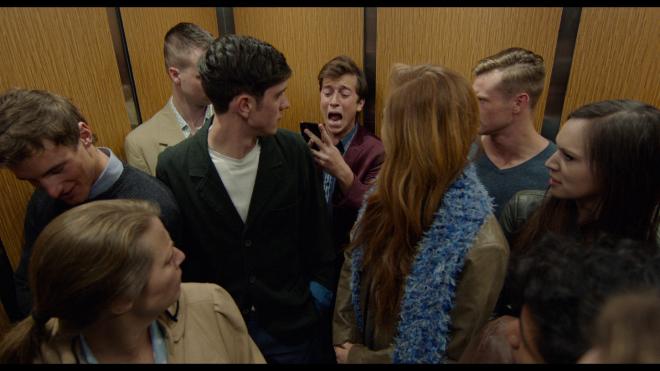 Time Freak makes its way on Blu-ray with a pleasing 1.85:1 1080p transfer that is pretty much par for the course. Details are strong throughout allowing you to appreciate the attractive young cast, clothing, the set design work, and the film's mountainous Utah filming locations. Colors favor the warmer yellow tones without skewing primaries too dramatically. Blues have a nice icy color to them while reds are strong as flesh tones are healthy and even. Black levels dip into some nice inky black areas giving the image a notable sense of depth. I did spot a little bit of banding around some patterned clothing here and there, but nothing too severe to get worked up over. All in all, this is a clean clear image transfer. 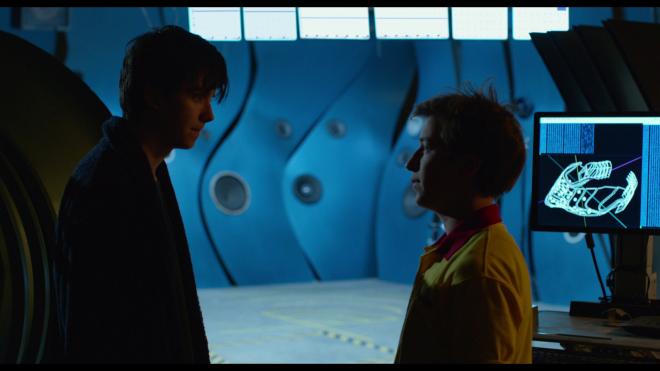 Time Freak is given A solid if maybe a bit underutilized English DTS-HD MA 5.1 audio mix. All of the basics are on point. Dialogue is crystal clear. Sound effects have natural qualities. Scoring by Andrew Lockington fils in the mix nicely. My only real issue here is that the mix largely feels very Front/Center through the film with only small dips into any genuine surround territory. There's a late chase scene done for laughs that get some use out of it and another moment where Skyler Gisondo's Evan is repeatedly trapped in a crowded elevator that gives some sense of claustrophobic atmosphere but that's it. Levels are fine and don't require monitoring. It's a fine mix and does its job but it won't blow your hair back. 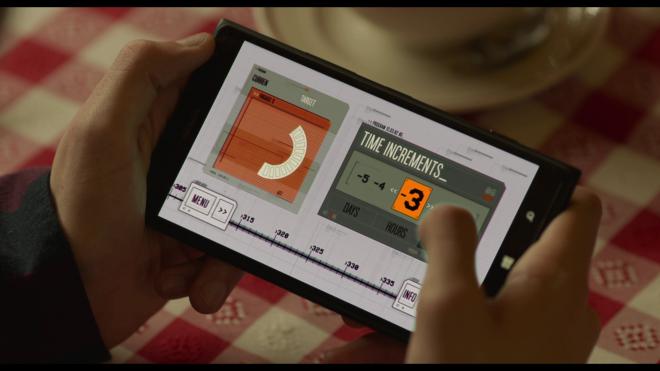 Surprisingly enough Time Freak is given a solid assortment of bonus features with an audio commentary and the original short film leading the pack. The behind-the-scenes stuff is pretty typical EPK material. 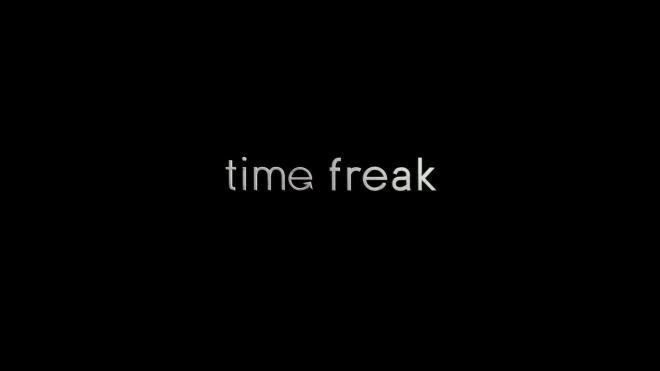 Time Freak isn't a great movie by any stretch, but it's certainly enjoyable. Its heart is in the right place even if its aim misses the mark. It's clever without being too full of itself. It's funny without the jokes overstaying their welcome or becoming base. A little script refinement, something closer to the original Oscar-nominated short, and perhaps this film would have had stronger legs to stand on. Lionsgate delivers another solid Blu-ray release with a standup A/V presentation and a couple of decent bonus features - especially the original short film - make this an overall solid release. If you're in the mood for a fun but not overly complicated, decent but not amazing, romantic comedy - Time Freak should fit the bill. Worth A Look.

Sale Price 17.99
List Price 21.99
Buy Now
3rd Party 15.98
In Stock.
See what people are saying about this story or others
See Comments in Forum
Previous Next
Pre-Orders
Tomorrow's latest releases