Rider on the Rain

Rider on the Rain features Charles Bronson in a slick Euro-thriller about a woman who killed her attacker and disposes of the body, but is hounded by a relentless American who seems to know everything she did. This thriller has twists and turns aplenty featuring the traditionally cool Bronson in one of his best flicks and a great turn from Marléne Jobert. Kino Lorber Studios Classics brings Rider on the Rain to Blu-ray with a splendid release featuring both the English version and French version of the film along with a great audio commentary track to punch up the bonus features. If you're a Bronson fan or in need of a slick smart thriller, consider this one Recommended.

Mélancolie "Mellie" (Marléne Jobert) has a nice life. She's married Tony (Gabriele Tinti) a TWA airline navigator. She helps her mother Juliette (Annie Cordy) with her bowling alley and electric car racetrack. Then everything changes when a man gets off the bus in town. Following her home, the man viciously assaults Mellie while her husband is away. With no other choice she kills the man and out of fear dumps his body into the sea. The next day, a mysterious man called Harry Dobbs (Charles Bronson) shows up looking for a man called Mac Guffin - and he's convinced Mellie knows exactly what happened to him. 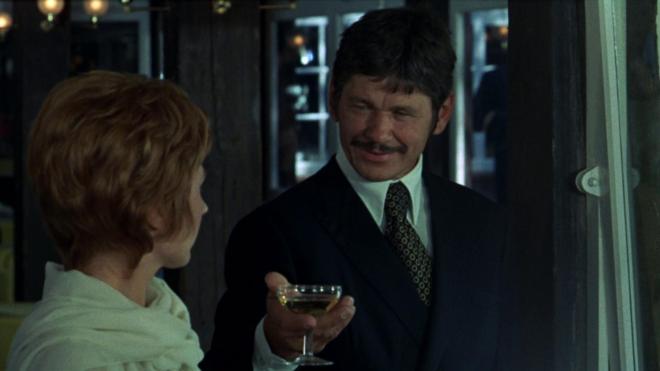 What I loved about Rider on the Rain was that it isn't like most of Bronson's 70s output. It's not an action movie. It's a potboiler thriller where you don't know where the story is going and the twists and turns in character keep the flick surprising and fresh. It doles out information very purposefully. You're given pieces of the picture one at a time and just when you think you know what the image is, it's got one more twist in store.

Through it all, Bronson and Jobert play off each other perfectly. Bronson is his standard hunky confident self, but here he isn't a man of action. He's sly. He's been around the block a few times and knows the score. Nothing surprises him - he just needs to connect the dots. Meanwhile, Jobert is in the precarious position of not only trying to figure out Harry Dobbs' motivations and what he's after, but she also has to guard herself against being implicated in a murder.

This is one of those movies where I'm stuck in the crappy position of not being able to talk much about the plot. I loathe spoilers so I don't want to ruin anyone else's good with my dissections. Suffice to say I was tickled when I thought I had everything figured out, I thought I had the movie pegged and then Director René Clément with screenwriter Sébastien Japrisot manage to pull the rug out from under me. I love being surprised by a movie and I especially love it if the twists and turns are natural. They work. There's nothing faked or nothing that is such a left-field turn that it ruins the show.

What's also fun and interesting about Rider on the Rain is you effectively have two versions. Clément and his cast shot the film twice, once in English and again almost shot for shot in French. There aren't any differences in content or plot between the two, just language and pacing. The French version runs just 4-minutes longer and it's interesting to see how the language differences altered the dialogue beats. Some of the more suspenseful moments get to linger a few seconds longer. While Bronson is most certainly dubbed, he's a good sport keeping pace with the rest of the cast. Since I don't understand a lick of French, the English version is absolutely more accessible, but the French iteration has an ever so slightly more nuanced flavor to it.

I'd heard of this film but never saw it before so I went in with some typical "Bronson" expectations and was delighted with what I saw. For a middle career thriller, it's calmer and more purposeful and plays closer to Bronson of his earlier career. He's not out there guns blazing or being a badass. He's just a jaded man who's seen it all and meets his match against a strong-willed woman who can hold her own. Apparently, Bronson tried to get it remade as part of his contract with Cannon in the 80s and I'm so glad that never happened. This is a great thriller that easily stands as one of Bronson's best and it didn't need to be cheapened by a needless remake.

Rider on the Rain lands on Blu-ray in a single-disc release courtesy of Kino Lorber and their Studio Classics label. Pressed onto a Region A BD-50 disc, the disc is housed in a standard sturdy Blu-ray case with reversible insert artwork reflecting the different regional advertising marketing. The disc loads directly to a static image main menu with traditional navigation options where you can select which version of the film you would like to watch.

Whether you're looking at the English or the French version, Rider on the Rain enjoys a rather beautiful image presentation. Nothing on the artwork indicated how recent the transfer was struck or if it was from a 4K restoration, but looks fantastic. The source elements are in exceptional shape without any notable defects. some slight occasional speckling is noticeable in darker scenes, but otherwise, this image is blemish-free.

Fine film grain is intact throughout giving the image for both versions a nice film-like appearance with strong detail levels. Facial features, clothing, scenery all come to vivid life allowing you to appreciate the tiny details that you don't think are important but manage to move the plot in ways you wouldn't otherwise notice. Colors are also often striking with lush primaries and healthy flesh tones. Black levels are strong giving to nice inky blacks with strong shadows and a great sense of depth. The only iffy spots surround some scenes with Jobert and her white dress. Occasionally the white could appear a bit hot and the image a little overly contrasty and flat - but those were such brief moments - and they're in the English and French versions - that they don't detract from the overall experience, but enough to keep this disc from earning a perfect score. But it gets damn close!

Rider on the Rain enjoys a healthy English DTS-HD MA 2.0 mix as well as a sold French DTS-HD MA 2.0 mix - depending on which version you're looking at. Of the two, I have to say that I prefer how healthy and full the English mix is over the French - more on that in a second. Dialogue for the English track is tip top with clean exchanges without overlapping or drown-outs from the outside elements. Scoring by Francis Lai punches things up giving the film a distinctly European flavor while keeping the mood ominous and suspenseful when and where necessary.

On the French side, overall the mix is very good - it hits the right notes - but it does have an ever so slightly tinny quality at times. It felt like some key action moments like doors slamming to dramatically accent a scene didn't quite square the same impact as the English. I honestly thought I was just hearing things but I kept replaying certain sequences to bear this out. It's not an overt distraction and in all honesty, if I didn't watch both versions virtually back to back I probably wouldn't have noticed. So if I was scoring these individually I would peg the English a 4/5 with the French earning a 3.5/5. Aside from the American actors obviously being dubbed in the French version, there really isn't too much of a difference between them.

While Rider on the Rain isn't loaded with a mountain of bonus features, I'm pleased that the film gets both versions on the same disk while also enjoying a pretty terrific audio commentary track. The rest of the package is the standard promotional material that KLSC throws at virtually every release.

I have a big soft heart for Charles Bronson movies. He's the kind of cool cat everyman performer where you can toss him into just about any movie and you'd get a halfway decent - if predictable - performance. Rider on the Rain was a nice surprise. Just when he was entering his more action-heavy phase of his career comes this rather elegant and twisty Euro-Thriller. With a sly turn from Bronson and an impressively committed performance from Marléne Jobert, Rider is a slick ride worth taking.

KLSC does right by Rider on the Rain delivering both the English and French versions of the film in terrific form. Both offer solid image transfers with strong audio mixes. Bonus features are light, but the audio commentary is worth the go around. You don't even have to be a Bronson fan to enjoy this one, it's good for anyone game for a slick Euro-thriller that knows how to keep the twists coming and slowly unravel the plot. Recommended.