Adaptation is a tricky game and challenges The Sisters Brothers to a duel between making a cinematic story while being faithful to the source novel. Darker with less overt humor than the book but just as contemplative, the film features exceptional performances from John C. Reilly and Joaquin Phoenix, memorable turns from Jake Gyllenhaal and Riz Ahmed. 20th Century Fox delivers an exceptional looking and sounding Blu-ray disc that is sadly light on bonus features. If you love deconstructed westerns, there is a lot to love and admire with The Sisters Brothers. Highly Recommended.

Eli (John C. Reilly) and Charlie (Joaquin) are the Sisters Brothers - two notorious triggermen who earn their way and reputation doing the dirty work The Commodore (Rutger Hauer) needs getting done. The brothers are inseparable, but the years of killing is wearing thin. Eli wants out to live a peaceful life while Charlie dreams of one day supplanting The Commodore. Their latest job to track down Hermann Kermit Warm (Riz Ahmed) is further complicated when their lead man John Morris (Jake Gyllenhaal) has joined Warm in his scheme to acquire vast amounts of gold. 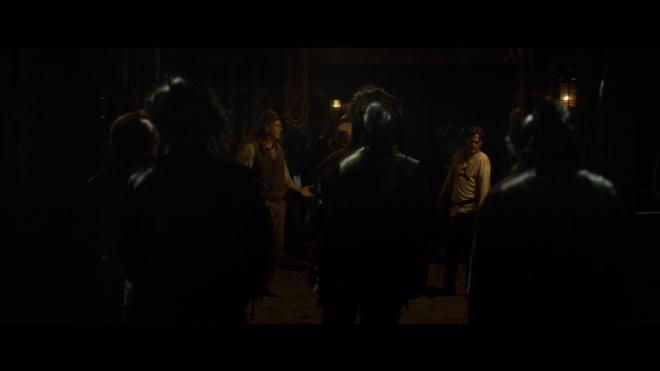 In novel form, The Sisters Brothers from author Patrick DeWitt is a bitterly funny dark tale about two brothers and their misfortunes on their latest job. While often hilarious, the book is frequently grotesque and squirm-inducing in its frank clear depictions of wounds and death. The film, from director Jacques Audiard and co-screenwriter Thomas Bidegain, passes up a lot of the natural humor that comes from horror and focused almost entirely on the deeply meditative qualities of the book. This isn't a bad thing, necessarily, but if you've read the novel and were expecting some of the darkly comical elements of the book to shine through the horror, they're absent here. On the other side of that coin, The Sisters Brothers proves to be a thoughtful examination of time and mortality. It took two viewings on separate days to get to my opinion, but I thoroughly love this film.

It's not a complicated story. The themes about the impact of greed and long-term vision have been well explored, but it's nice to see a film like this that takes its time and gives every character in the story a meaningful journey. Eli and Charlie are both tired of the life they've been living - but have two very different solutions. John Morris was a lost man in search of a path and he finds it with Hermann Warm whose own dream for a perfect society is built upon the short-term necessity for greed.

Like the book, the opening should be a clear indication that things aren't going to end well for everyone involved - no matter how well-intentioned certain actions were meant. It's an often tough ride to roll along with - especially if you were expecting some impressively dark comedy to help lighten the mood. My first viewing I was only mildly satisfied because after reading the book I had some expectations about certain events. While the film hits those beats admirably, the humor is often lost. Some does come through, but not quite enough to lighten the thematic load. But the film stuck with me. I kept thinking about it so I gave it a second viewing a day later and I now fully appreciate this adaptation.

I'm never one to feel that film adaptations need to be strictly to the letter of the book. Some elements of novels just don't translate to movies so changes need to be made. One of the best examples of this - and subsequently why a less humorous and more meditative adaptation - is the relationship between John Morris and Warm. In the book, you don't really meet them until late in the story and then you're given some diary material to explain things. The film smartly expands their respective roles and plays them concurrently with Eli and Charlie's own journey. It not only gives you more context but also strengthens their relationship and provides some nice juxtaposition between the characters and their dynamics.

I love a good Western and The Sisters Brothers is a beautiful Western. Some could call it a "Revisionist Western" but I wouldn't go so far as that. Yes it's dirty and grim and the violence is played out in fairly graphic detail, but I would consider it more of a deconstruction of the genre. Truthfully this sort of story could be an average family drama or a gangster crime thriller and resonate just as effectively. It just happens to be a western and a damn beautiful one with exceptional performances from everyone involved. Reilly and Phoenix need to be in more movies together as they share genuine chemistry while Jake Gyllenhaal delivers another subdued but oddly arresting character. I've got to tip my hat to Riz Ahmed, he wasn't who I pictured Warm to be, but he wonderfully brings the character to life. It may not have been the box office hit that it should have been and it didn't earn the seasonal award accolades it deserves, but don't let The Sisters Brothers pass you by.

20th Century Fox saddles up The Sisters Brothers for Blu-ray in a two-disc Blu-ray + DVD + Digital set. Housed in an eco-friendly 2-disc case with identical slipcover artwork, the disc loads to trailers for other 20th Century Fox releases before arriving at an animated main menu with traditional navigation options. 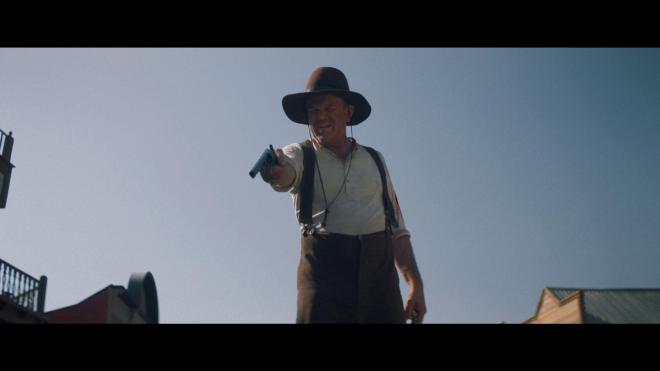 Like Suspiria, this is where I hope the international market comes through for us because The Sisters Brothers is a beautiful film and I am sure a 4K UHD Blu-ray release would look amazing. Such as it stands, this 2.39:1 1080p transfer is quite the looker in its own right. The film was shot throughout Spain and Romania and the film captures the rugged scenic beauty. Details are strong throughout allowing for rich textures in clothing, costuming, the wild wilderness, and facial features to come through perfectly. Colors purposefully favor earthy yellows and browns throughout much of the film, but flesh tones look consistently healthy and bright primaries don't suffer. Eli's flamboyant red shirt when the pair reach San Francisco is a standout. Black levels are very inky with only little ranges of natural light from a candle or lantern to give any idea what is in the frame. Through that, the image maintains a nice sense of depth and dimension. I caught some occasional softness and a little bit of video noise every now and again, but overall this is a truly wonderful looking film. 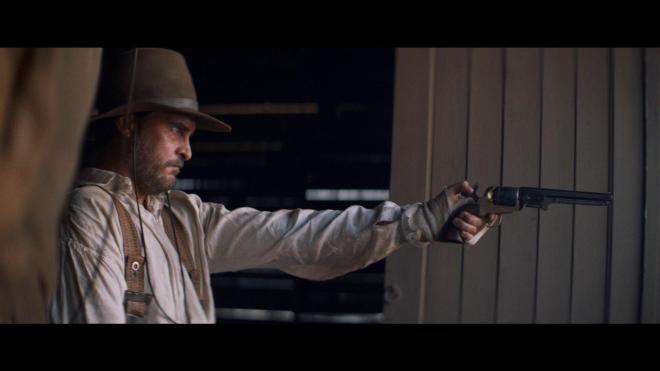 You gotta love a western that knows how to make use of gunfight! The Sisters Brothers pay their way in spades with a richly immersive DTS-HD MA 5.1 audio mix. Much of the film takes place in wide-open prairie or in rugged mountain terrain with some occasional indoor locations, but through it all, the mix maintains a great sense of atmosphere and surround activity. It may not always draw attention to itself but the subtleties make it a noteworthy audio mix.

Dialogue is crystal clear and never overpowered by the rest of the mix. The Alexandre Desplat score is the perfect accompaniment to the film. Sound effects are pronounced when necessary. Gunshots offer a great kick in low LFE with plenty of snap and boom. With only one exception gunfights are mostly shot from a distance so there's a terrific echoing quality to them that provides great atmosphere and spacing qualities. Gotta admit that I wish this had an object-based track, but this 5.1 mix is pretty damn special. 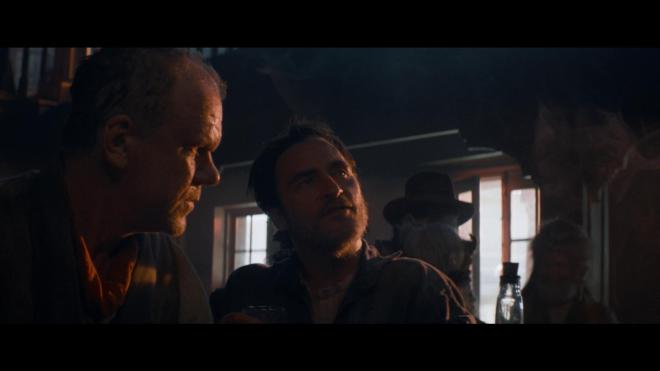 The only bummer with this release is that the bonus features are all pretty slim EPK stuff. The cast material is alright as they do get to discuss their characters and the Q&A does offer some decent material but a commentary track would have gone a long way. 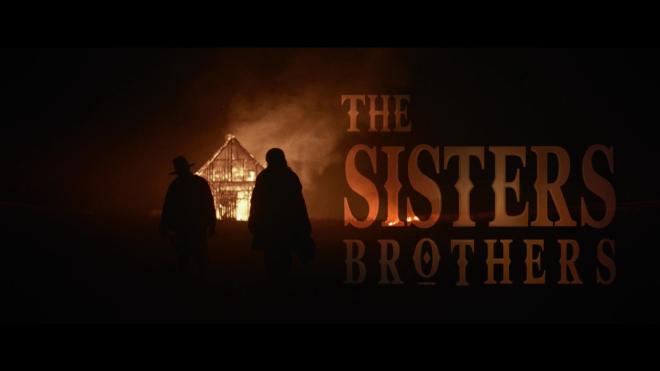 The era of the Hollywood Western has dimmed, so when something like The Sisters Brothers comes along, it's pretty special. Terrific performances from John C. Reilly, Joaquin Phoenix, Jake Gyllenhaal, and Riz Ahmed make this somber western worth watching. It may be a bit grim for some, but it's a beautiful flick. 20th Century Fox rides The Sisters Brothers onto Blu-ray with a beautiful 1080p transfer and an excellent DTS-HD MA 5.1 mix. Bonus features are unfortunately light, but there is some good info tucked in there. It may not be as darkly humorous as the source novel, but that doesn't keep The Sisters Brothers from being a heartfelt impactful western. Highly Recommended.