Overview - Chris Farraday long ago abandoned his life of crime, but after his brother-in-law botches a drug deal, Chris is forced back into running contraband. Things quickly fall apart, and Chris must use his skills to navigate a treacherous criminal network of brutal drug lords, cops, and hit men before his wife and sons become their target.
OVERALL
Give it a Rent 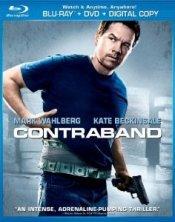 When I first saw the TV ads and trailers for 'Contraband' late last fall, I was singularly unimpressed. Though I've learned never to judge a movie by its preview, I was pretty sure I had this one pegged. Baltasar Kormakur's action-thriller looked like a run-of-the-mill retread of a dozen similar movies; you know, the ones where the reformed criminal returns to his illegal trade to settle an old score, save his endangered family, and/or recapture some nostalgic thrills. Yawn. And despite an attractive cast led by Mark Wahlberg and Kate Beckinsale, 'Contraband' seemed on the surface to be predictable, cliched, and hastily constructed, the quintessential formula film produced for the sole purpose of making a quick buck from its young buck target audience. Even the title sounded cheesy. Which got me wondering: After 'The Fighter,' why would Wahlberg want to revert to crap like this?

Well, I'm happy to report 'Contraband' isn't crap. While far from original and directed in a rather pedestrian manner, this slick heist flick (which is actually a remake of a 2008 Icelandic film called 'Reykjavik-Rotterdam' that, interestingly, stars Kormakur) veers just far enough away from the status quo to separate itself from other entries in its cluttered genre. A few good plot twists counterbalance some holes and trite episodes, while fine acting by Wahlberg, Beckinsale, Ben Foster, Giovanni Ribisi, and Lukas Haas helps raise the believability quotient and lend the characters more dimensionality than the lines on the printed page provide. Though far from a cinematic masterpiece, 'Contraband' is also far from the dreck I envisioned it to be, and winds up an entertaining, thrill-packed diversion.

Chris Farraday (Wahlberg) is a reformed smuggler who has seen the error of his ways and now enjoys a straight-arrow life as a home security expert, husband to Kate (Beckinsale), and father of two young boys. Their quiet, middle-class existence in post-Katrina New Orleans, however, is rocked off its rails when Kate's delinquent brother Andy (Caleb Landry Jones) dumps a huge shipment of cocaine into the ocean to avoid a surprise inspection by the customs department, and his barbarous boss, Tim Briggs (Ribisi), still expects to reap the projected proceeds from the deal. With Andy's life in jeopardy, it's up to Chris to come to his aid and find a quick way to score the astronomical funds necessary to settle his brother-in-law's debt and clear his name. And he does so the only way he knows how - by smuggling. Just like Michael Corleone, just when Chris thinks he's out, they pull him back in.

Though Chris has left the underworld behind and become a better man, it doesn't mean he doesn't miss the adrenaline rush and high-stakes allure of his former business, and he decides to enjoy his brief foray back on the wrong side of the law. With the help of his best friend, Sebastian (Foster), he assembles an adroit, loyal crew of accomplices and heads to Panama, where he hopes to score big bucks smuggling millions of counterfeit bills into the U.S. Meanwhile, Briggs terrorizes Chris' wife and kids, upping the ante of Chris' desperate venture.

'Contraband' chugs along at a brisk clip, mixing action scenes with tense personal confrontations. Kormakur adopts an appropriately gritty style that suits the New Orleans and Panama settings well and the nefarious nature of many of the principals. Keeping most stunts and situations within the realm of reality helps the film stay grounded, despite the aura of implausibility that hovers over its plot. We may not accept everything the characters do or how they get in or out of various tight spots, but the actors' commitment to their roles lends the film essential elements of truth similar pictures lack.

Wahlberg always wears action roles well, and this one is no exception. His portrayal won't win him any awards, but he's a strong, likeable presence whether he's flashing a cocky grin, furrowing his brow, or performing a variety of stunts. Beckinsale tones down the glamour here, but "dowdy" for her is still gorgeous, and she asserts herself well in a physical role. But it's the supporting players who really provide 'Contraband' with the needed punch to put it over, and Foster leads the charge with an especially riveting performance.

'Contraband' isn't memorable, but it's fun and absorbing while it lasts, a good popcorn thriller that puts a fresh spin on a tired theme. Though hardly a brain teaser, it's smarter than many of its counterparts and never takes its foot off the gas for long. Even jaded action fans should get a charge out of this one.

'Contraband' comes packaged in a standard case that contains both a Blu-ray and DVD. Video codec is 1080p/AVC MPEG-4 and default audio is DTS-HD Master Audio 5.1. Once the disc is inserted into the player, promos for Universal's 100th anniversary, 'Pariah,' and Blu-ray technology precede the full-motion menu with music.

'Contraband' sports a pleasing 1080p/AVC MPEG-4 transfer that's generally crisp and clean, but also accurately represents the film's gritty subject matter. The opening scene is a bit murky, as crush obscures fine detail, but once the story gets rolling, the picture exhibits solid contrast and a vibrant look, which heightens audience involvement. A muted color palette nicely reflects the drabness of the New Orleans and Panama City settings, and strong black levels provide a welcome lushness to nocturnal scenes.

A faint grain structure adds appropriate texture to the proceedings, but never compromises clarity. Background elements are easily discernible and sharp close-ups render facial features well. Fleshtones are spot-on, too, yet shadow delineation is a tad weak. The pristine source material, however, shows no signs of wear, with nary a speck, scratch, or mark dotting the picture.

All in all, this is a fine effort from Universal that's free from digital tinkering, noise, banding, and other nagging imperfections. It's not demo material, but it's a solid new-release transfer. 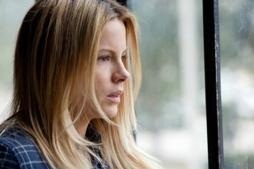 The DTS-HD Master Audio 5.1 track supplies solid audio, but not the spectacular variety that distinguishes the best action films. Surround presence isn't as pronounced as I would have liked, though front channel stereo separation is distinct. At times, atmospherics tend to overwhelm dialogue somewhat, a fact that isn't helped by the actors' incessant mumbling, yet conversations are generally clear, and the music score exhibits fine fidelity and good tonal depth.

A wide dynamic range scale handles all the highs and lows of this full-throttle film with ease, and bass frequencies pulsate with authority. Gunfire whizzes crisply across the soundscape, and subtleties shine through nicely. Distortion is never an issue, and no surface noise intrudes on this streamlined track.

The audio of 'Contraband' isn't demo material either, but it does its job without any noticeable hiccups. 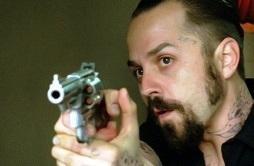 A few supplements enhance this release, but there's nothing particularly earth-shattering on the extras menu. 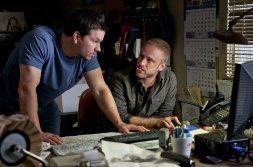 'Contraband' will never be listed as one of the high points of Mark Wahlberg's career, but this taut thriller puts some fresh spins on a tired premise and ends up an entertaining, nicely executed adventure yarn. No deep themes or probing moral lessons here; just straightforward, plot-driven action that holds our attention. Good acting by a strong cast makes the material seem better than it is and helps mask the myriad cliches liberally sprinkled throughout the picture. Solid video and audio, and a decent array of supplements make this release worthy of a rental for Wahlberg and action fans seeking a mindless evening of high-voltage entertainment.

Sale Price 13.65
List Price 14.98
Buy Now
3rd Party 9.95
In Stock.
See what people are saying about this story or others
See Comments in Forum
Previous Next
Pre-Orders
Tomorrow's latest releases