Johnny English Strikes Again - with a mixed bag of old jokes we've already seen countless times not only from Rowan Atkinson but any number of other spy spoofs. It's funny but there is a stale air of stagnation hovering over this entertaining but uninspired sequel. Universal Studios takes this Blu-ray out of deep cover with a rather impressive video transfer and a DTS:X audio mix that gives fully to the comedic shenanigans of Atkinson and his cohorts. The lot of bonus features isn't too bad either making this disc Worth A Look if you're a true fan of the series or just need an uncomplicated comedy.

"…We don't really do guns anymore."

After a cyber-attack exposes the identity of every single active secret agent in England - they have no other choice but to reinstate the last living agents whose identities weren't digitally stored. After accidentally being incapacitated by an errantly tossed secrete concussion grenade - only Johnny English (Rowan Atkinson) is left to provide an analog solution to a digital crime. With Bough (Ben Miller) back at his side - together the two agents are hot on the tail of the international digital criminal - with Russia's top assassin Ophelia Bhuletova (Olga Kurylenko) assigned to kill Britains goofiest super-spy. 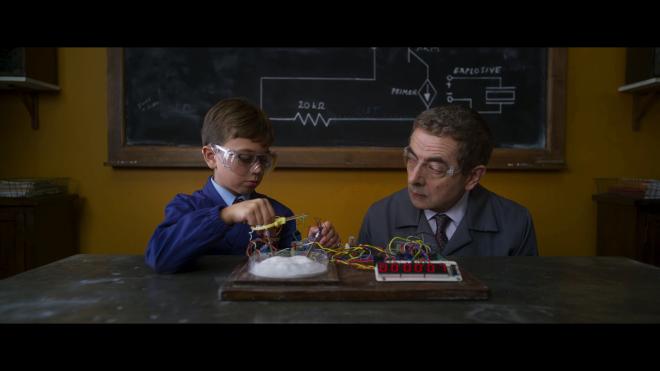 I'm not really going to mince words when I say that the funniest and most-inspired jokes and gags in Johnny English Strikes Again run their course inside the first fifteen minutes. Seeing Atkinson's retired English teaching young kids at a rich high-society boarding school in the finer points of tradecraft gives some solid laughs. I got the biggest laugh from when the bell rings and he dynamically ushers 10-year-olds out the window on zip-lines to their next classes rather than using the stairs - without the headmaster or parents noticing. It was a damn funny concept that was well executed seeing what a retired agent could teach little kids.

The next few minutes with England's intelligence community struggling to find the last able-bodied retired agents and cutting to cameos for Agent Five (Michael Gambon), Agent Seven (Charles Dance) and Agent Nine (Edward Fox) was a genuinely hilarious moment. After that - the truly unique and inspired jokes give way to a parade of Atkinson gags we've seen many times before and comedic bits lifted from flicks like Spy Hard, Austin Powers, and the more successful action/comedy hybrid seen in Jean Dujardin's OSS: 117 outings.

With that - if you've been a stalwart of Rowan Atkinson through his time on Black Adder, Bean, and numerous other ventures including the previous two Johnny English movies - you'll get what you paid for here which is more of the same. I won't say the movie isn't funny because there are some good giggles to get, but they're not true belly laughs as this spy spoof is dramatically lacking a satirical edge. It shouldn't be too much of a disappointment for Atkinson fans simply because you already know what you're going to get - just in a different package.

Johnny English Strikes Again sneaks its way onto Blu-ray courtesy of Universal Studios in a two-disc Blu-ray + DVD + Digital release. Pressed onto a BD-50 disc, the discs are housed in a standard sturdy 2-disc Blu-ray case featuring identical slipcover artwork. The disc loads to trailers for other upcoming Universal releases before arriving at a static image main menu. 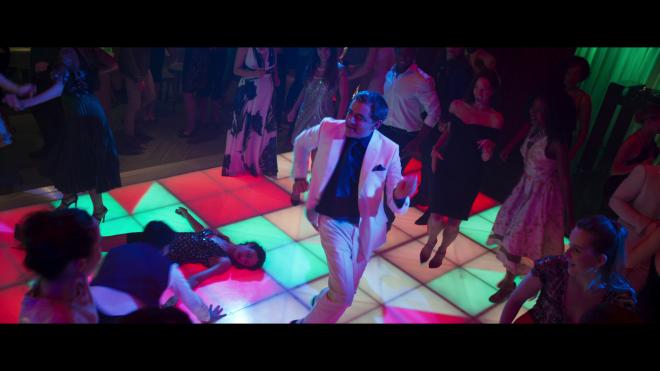 Shot digitally on the Red Epic Dragon setup (I don't know the Digital Intermediate resolution), Johnny English provides an often stunning 2.39:1 1080p transfer. Details are sharp and crystal clear - which is great for a number of sight gags - like English teaching kids the art of camouflage early in the film is a funny bit. Facial features, clothing, set design, and the film's many luxurious locations look fantastic without any compression issues. Colors are vivid with splendid primaries. Blues and reds really come to life - especially English's antique spy car for his mission.

Black levels are deep and inky giving the image some real depth with balanced contrasts and bright clean whites without blooming. The only negative I will say here is that some of the digital effects don't quite blend as well - computer screens or phone screen images, in particular, have a cut-and-paste quality to them. But aside from that little quibble, this is a stellar presentation. it's too bad the movie isn't better, this has a lot going for it and I have a hunch it could have made for a great-looking 4K UHD release. 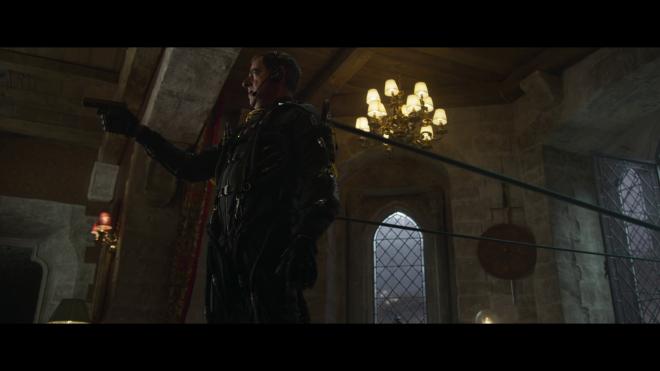 Like any good spy, Johnny English is outfitted with one hell of an effective DTS:X audio mix. I was actually a little surprised this film would be given such object-based treatment, but the flick manages to get great use out of it. It's not always the most dynamic as many of the gags are pretty front and center with their audio/visual balance but there are a number of great off-screen sound effects that get great placement and - the explosion that knocks out the other old-timer agents was a good laugh. The cut from the quiet Prime Minister's office wondering what English is doing to the chaotic inferno that is destroying the French restaurant he went undercover at as a waiter is a solid use of object-focused audio and atmosphere. Another great highlight is when English gets his Aston Martin V8 - the echo when that engine roars to life in the warehouse is terrific stuff.

To that end, everything else about this mix is spot on. Dialogue is crystal clear. Sound effects are well spaced with some decent if not always necessary object placement. Scoring rounds out the mix and there is some great LFE activity throughout to keep the bass rumbling. Atmosphere provides some nice accents for some specific locations even if most of the time it's not being fully utilized. All in all, I don't have any complaints about this mix. 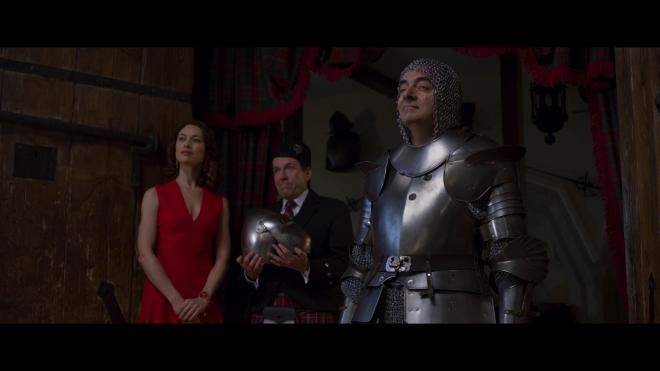 While this one wasn't a huge hit, I gotta hand it to Universal for not dodging the bonus features. Most of them are simple EPK short-stick material, the audio commentary was actually a pretty decent listen as it covered a lot of the production and how to time the comedy and edits. 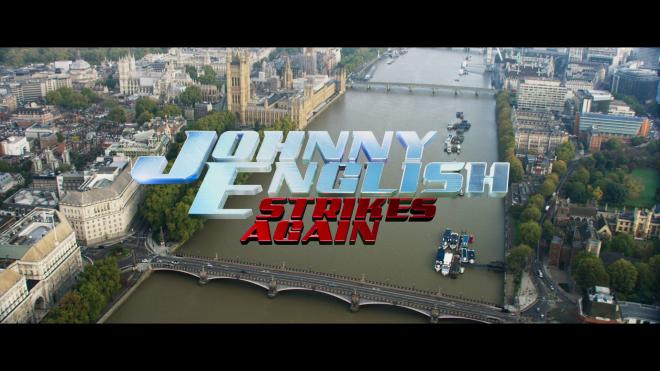 Johnny English Strike Again isn't new or groundbreaking in the realm of spy spoof comedy. It's Rowan Atkinson doing what Rowan does - which pretty much means more of the same of everything you've already seen. There are some great gags but true belly laughs are relatively few. All the same, it's good for a decent giggle. Fans will enjoy it but if you're not a fan of Atkinson's brand of comedy - this won't change that opinion. Universal Studios brings Johnny English Strikes Again to Blu-ray in fine order with a solid video transfer and an aggressive DTS:X audio mix. Bonus features may not be the greatest ever assembled but there's some good material there. If you're a fan, you should have a good time. Worth A Look

Sale Price 13.99
List Price 19.98
Buy Now
3rd Party 13.99
In Stock.
See what people are saying about this story or others
See Comments in Forum
Previous Next
Pre-Orders
Tomorrow's latest releases