The Thing from Another World

Before John Carpenter tackled John W. Campbell Jr.'s terrifying science fiction short story, Howard Hawks unleashed his vision of the horrifying alien creature from outer space with 1951's The Thing From Another World. It may be a somewhat looser adaptation of the source material, but it's steeped in early Soviet paranoia giving the film a suspenseful mood and atmosphere all its own. It's held up brilliantly over the years and is a true sci-fi classic. Warner Archive brings The Thing From Another World to Blu-ray in fine order with an aged but still impressive remastered transfer and an effective audio mix. Sadly, no genuine bonus features were supplied for this otherwise excellent release. Time to retire that old DVD. Recommended.

"Spread out everybody, we're going to try and figure out the shape of this thing."

Something strange is happening in the Arctic. Army pilot Captain Pat Hendry (Kenneth Tobey) and his crew are ordered to a remote Arctic research station after esteemed Dr. Arthur Carrington (Robert Cornthwaite) issues reports of strange scientific phenomena. They discover that a flying saucer has crashed - and its occupant is encased in ice. Bringing The Thing (James Arness) back to the research station, the alien is accidentally thawed and unleashed upon the compound. With a storm hitting and no way to call for help, Captain Hendry and the rest of the stranded team will have to survive the onslaught of an alien being that needs human blood in order to reproduce and take over the world! 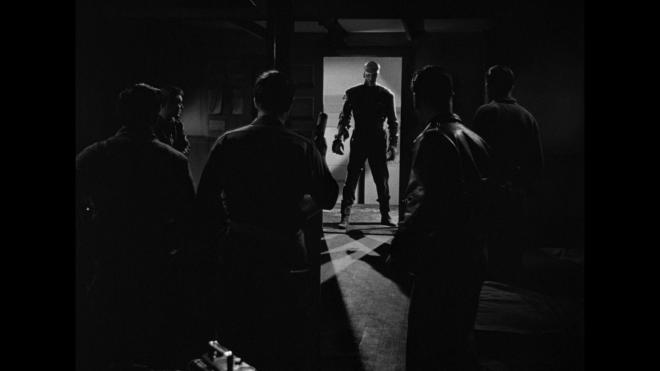 The Thing From Another World is a true classic in my book. It's suspenseful, it's action-packed, it's steeped in a creepy mood and atmosphere of dread populated by a cast of characters you actually care about. Just like the 1982 John Carpenter version, The Thing. Both films are sourced from the same short story, "Who Goes There?", by science fiction author and editor John W. Campbell Jr., but they each take radically different approaches to the titular monster. While Carpenter's film is a closer adaptation with the Thing being a shapeshifter, the Howard Hawks monster is a creature capable of limitless reproduction - so long as it has a constant supply of human blood. Both films are of their respective eras and both are excellent pieces of horror/sci-fi in their own unique ways.

For The Thing From Another World Howard Hawks amps up the Red Scare elements by making the creature a specimen that once given a chance to thrive or left unchecked could destroy us all. The metaphor is completed with an overzealous scientist eager to give the monster a chance to explain itself - at the risk of killing everyone in the station. It's the kind of political hyperbole that can either be a detriment to a film or be one of its strengths. Here it's a strength. One could easily write off Robert Cornthwaite's Dr. Carrington as a blind "sympathizer," but Kenneth Tobey's Captain Hendry doesn't come off much better as he's steadfastly unwilling to listen to any alternate theories or arguments.

Both men are given plenty of time to state their case and their dialogue drives the increasing sense of suspense and foreboding - Hendry is only right because this is a scary movie. You can't spend 90% of the movie scared out of your mind and have the creature turn out to be a lovable critter like E.T.! When the power goes out at an Arctic research station - you know the beast isn't there to make friends!

While Christian Nyby is the credited director, it's widely known that Howard Hawks had a heavy hand in the production often directing many scenes himself. When you look at a film like Rio Bravo as a comparison, these moments are easy to spot. Hawks always had a knack for fast-paced, almost lyrical banter. Much of the dialogue rattles off breathlessly and the cast does a great job not only managing the pace but owning the lines in tune to their characters. Hawks also had a knack for some particularly sexually suggestive lingo if you read between the lines. Kenneth Toney's charged dialogue with Margaret Sheridan's Nikki Nicholson is some pretty spicy stuff for a film of this era! I also love all of the visual tricks that added to the suspense. The use of a flashing Geiger counter to let you know the Thing is getting closer is amazingly effective - especially when the lights go out.

I have an unending love for both Hawks' The Thing From Another World and Carpenter's The Thing. I honestly don't remember which one I saw first - they were both on T.V. a lot when I was a kid - and I've spent the last 30 years or so loving them equally. I honestly don't prefer one over the other. If I put one on, chances are pretty good I'll watch the other soon after. When winter comes around, I turn off the heat, kill the lights, grab some blankets and let this sci-fi creature feature roll. It never fails to entertain.

The Thing From Another World invades Blu-ray courtesy of Warner Archive Collection in a single disc set. Pressed onto a BD-25 disc, the movie is housed in a standard sturdy Blu-ray case. The disc loads directly to a static image main menu with traditional navigation options. 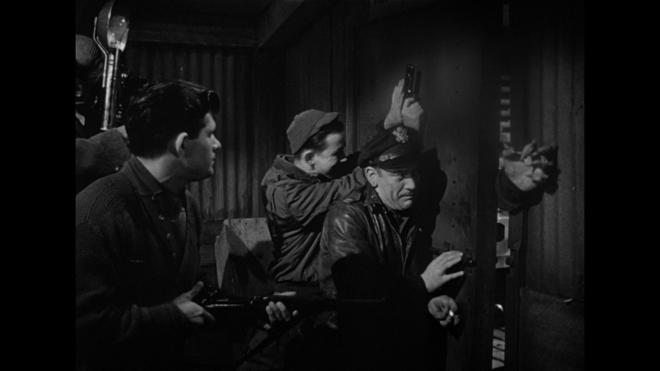 I've long hoped for The Thing From Another World to travel its way to Blu-ray and this 1.37:1 1080p transfer makes the journey in fine form. Sourced from a new 1080p HD master done this year, the image does have some small quibbles, but overall it's a dramatic improvement over the old DVD. Details are uniformly very good - especially in close-ups and medium shots. Since they cut all of his close-ups, the improved clarity lets you see a couple good shots of the full makeup James Arness endured as the Thing. Facial features, clothing, and the film's production design enjoy a nice uptick in detail but don't completely leap off the screen. Fine film grain is apparent but never overly noisy looking. Black levels and contrast are on point giving the film stable blacks, grays, and whites with a nice sense of depth.

The only real issue of note surrounds footage accompanying optical transfers. During these stretches of adjacent footage, the image becomes a bit softer and a little crunchier. It's most prominent through the credits and for about a minute into the main film. Then things clear up and look terrific. This is common for films of the era and is a baked in side effect of the optical work. All in all, the source elements are in great shape without any visible scratches or speckling issues. Obviously a fresh new 4K scan and restoration would have been ideal - however - this transfer is very good and makes it easy to retire the old DVD. 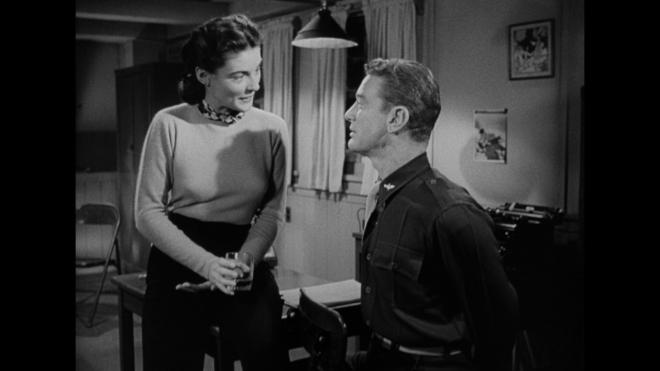 The Thing From Another World lands with a cracking good English DTS-HD MA 2.0 mono mix. This is a huge improvement in the dialogue department which I always thought sounded a bit soupy on the old DVD - especially during rapid-fire dialogue exchanges. It felt like I was hearing some of the sexually-charged banter for the first time! I can't count how many times I've seen this movie but I finally heard some really great jokes. Sound effects are well managed and provide a nice sense of atmosphere even through the narrow soundscape. Things get really creepy and unsettling when everyone is trying to be quiet and hide from the creature in the wood-floored corridors and their shoes scrape and scuff along the boards. To top things off, the theremin-heavy score by Dimitri Tiomkin sounds great and really kicks the mix where it counts. 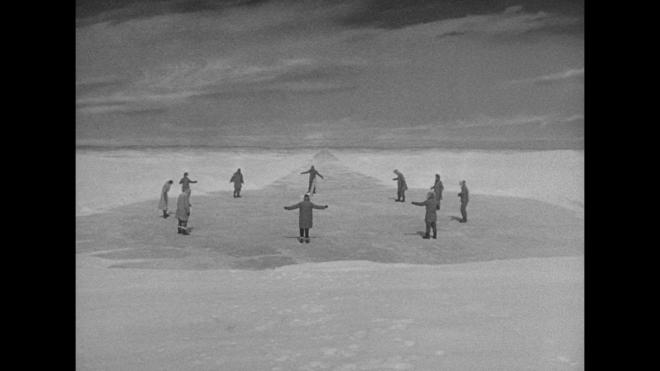 Unfortunately, Warner Archive didn't pull together any notable bonus features beyond a couple of trailers. While I'm happy to have the film on Blu-ray in good shape, I really wish The Thing From Another World had been given the full Collector's Edition treatment. 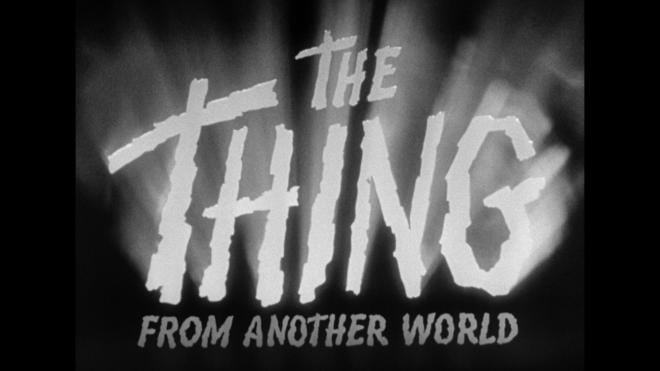 The Thing From Another World is a true science fiction classic. Made by legendary filmmaker Howard Hawks, it's stuffed with snappy dialogue, colorful characters, and when the action kicks in, it doesn't let up. It's a masterclass in suspense filmmaking using dialogue, sound effects, and lighting to terrify an audience rather than put the weight entirely on a special effect as you never really get a good look at the monster. I feel to truly love John Carpenter's equally effective version, you must have an appreciation for this original fright flick.

At long last, The Thing From Another World is out on Blu-ray courtesy of Warner Archive. With a solid remastered image transfer and a moody and effective audio mix, this is the best this Thing has looked or sounded on home video. I just wish the bonus features were more robust as it deserves more than a couple of trailers. But, if it's this disc or nothing, I'll gladly replace my old DVD. Recommended.

Sale Price 17.99
Buy Now
3rd Party 16.91
In Stock.
See what people are saying about this story or others
See Comments in Forum
Previous Next
Pre-Orders
Tomorrow's latest releases