When reading about the controversy surrounding First Man, I'm reminded we're living in an era where contemporary moviegoers now and again can't see the forest for the trees. Too many feel personally slighted, unreasonably disappointed and biasedly preoccupied on the irrelevant details affecting a film's overall plot, which seems to be a growing concern in the last few years in this age of social media. Complaining about the missing American flag during the Apollo 11 moon landing, which is the current squabble, overlooks the number of times the movie blatantly features the flag in many other areas and never lets audiences forget the historic voyage was very much an American endeavor. This wonderfully satisfying telling of the Space Race and the significant achievements made is immersed in an atmosphere of patriotic duty, thematically centered around the emotional-psychological sacrifices of the brave astronauts, as experienced from the perspective of Neil Armstrong.

Ryan Gosling stars as the celebrated space traveler and the first person to step onto the lunar surface in 1969, marking a significant moment in the history of humanity. Amid all the strife and turmoil occurring around the rest of the world — which, by the way, unfolds in the background much like the flag, but where is the uproar for that? — the historic voyage is a shared accomplishment by all the people of Earth. And the poignant, deeply-touching beauty of Josh Singer's (Spotlight, The Post) script, based on James R. Hansen's novel of the same name, is reminding audiences of a time when the world and the U.S. seemed on the brink of chaos, yet the importance of walking on the closest rock orbiting our planet is an achievement that remarkably quieted tensions, if even only for a moment. Intentional or not, director Damien Chazelle (Whiplash, La La Land) seems to make very subtle parallels between the disorder of the world and that of Armstrong's personal struggles. 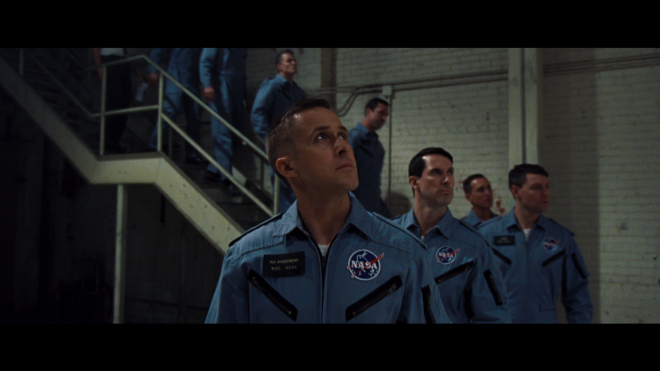 Gosling's controlled, deliberately detached performance has little concern with portraying the astronaut as an American legend, bent on satisfying or further exalting our collective mythologizing of a real person. Under Chazelle's direction, it has more to do with simply depicting a father straining to find balance after the death of his daughter — or better yet, a man grappling with loss all around him but unsure of how to confront or cope with the emotional pain. He is, at once, seemingly motivated to not allow those deaths be in vain, but he also displays moments of a tireless obsession to complete the mission, almost to the point of being neglectful to his family while his wife Janet (a wonderfully memorable Claire Foy) watches apprehensively of how to help her husband. One of the more heart-rending moments is with Armstrong and Ed White (Jason Clarke) walking at night, and the sight of child's tree swing suddenly pauses the conversation because Armstrong recalls a similar swing he built for his daughter but awkwardly walks away than talk about it with his friend.

It's these sorts of moments that make First Man a wondrous and stirring film that splendidly humanizes a legendary figure of history, and on that front, the production should be commended, from the performances and plot to the stage design and the visual effects. However, Chazelle's inventive approach to the material doesn't always gel well or always perfectly capture the emotional impact certain scenes seem to imply. Reuniting with Linus Sandgren, the heavily-stylized cinematography tells the story with the sort of shaky-cam documentary realism that feels rather amateurish, constantly pushing in on faces and pointless close-ups that add little to the narrative. Meanwhile, other aspects feel rather self-indulgent, as though knowing its importance and making the effort to appear as visually creative as possible, even if the scene doesn't require it. Frankly, there are times when the camerawork seems to evoke the spirit of a Terrence Malick film or Stanley Kubrick's 2001.

Nevertheless, for his fourth feature film, Chazelle remains a strong storyteller, even if his sudden artistic flurries get the better of him, and First Man is still an excellent film.

Universal Studios Home Entertainment brings First Man to Blu-ray as a two-disc combo pack with a code for a Digital Copy. The Region Free, BD50 disc sits comfortably opposite a DVD-9, and both come inside a blue, eco-elite case with a glossy slipcover. After several skippable trailers, viewers are taken to a static menu with music.

The bio-drama safely makes it home on Blu-ray with an excellent 1080p/AVC MPEG-4 encode that also poses a few challenges when making a proper assessment.

Shot on a combination of 16mm, 35mm and 65mm film, the video continuously fluctuates from razor-sharp definition with a very fine layer of grain to glaringly soft awash in a prominent coating of grain. There doesn't appear to be any rhyme or reason behind the changes, but they seem like sudden, random shifts depending on the filmmaker's creative mood, looking sharply detailed in one scene and unexpectedly blurry the next, even within the same sequence. Nevertheless, at its best, background information is distinct, and every nook and cranny of the spacecraft's interior is very well-defined while facial complexions are healthy, revealing the smallest feature during the many close-ups. All in all, the freshly-minted and very film-like transfer appears faithful to the artistic intentions of the filmmakers, which doesn't automatically translate to the sort of material used for demoing one's system.

Part of this visionary approach to the plot includes a notably subdued and restrained contrast, giving certain aspects of the narrative a deliberately somber feel while also looking fairly flat. Contrast suddenly receives a boost during action sequences, however, showing crisp, brilliant whites in the skies and on the space capsules. Brightness levels, on the other hand, are more consistent, showering the 2.39:1 image with rich, velvety blacks throughout and inky dark, midnight shadows provide a lovely cinematic appeal without too greatly engulfing the finer aspects. The overall palette is somewhat affected by Linus Sandgren's heavily-stylized orange-teal cinematography, placing more emphasis on yellows, ambers and browns, keeping with the film's rough, vintage documentary feel. Still, primaries appear accurate and cleanly-rendered with blues and reds, in particular, looking vivid and animated. (Video Rating: 78/100)

Being a historical period drama, it's reasonable to keep expectations in check when it comes to the audio portion, but the accompanying Dolby Atmos soundtrack actually surprises with the amount of activity present throughout the movie's 141-minute runtime.

Granted, the emphasis and focus are definitely on the characters and their interactions, delivering precise, very well-prioritized dialogue even during the loudest, more intense moments. Imaging continuously feels broad and spacious, exhibiting a dynamically extensive and detailed mid-range that provides excellent clarity in action sequences but deliberately distorted when rockets are being tested or blasting off. Background commotion moves smoothly between the three front channels and subtly into the top heights, generating a highly-engaging half-dome soundstage. Arguably, the low-end could perhaps hit harder and dig deeper in the launch scenes, but that's more a matter of personal taste and expectation, as bass is nonetheless quite commanding and occasionally couch-shaking.

Predictably, there isn't a whole lot going on in the surrounds and largely reserved for specific moments that will suddenly have listeners sitting upright in their seats. When employed, rear activity is shockingly impressive with a satisfying sense of envelopment, filling the room with either the chatter of people when they gather for certain events, the electrical beeps and bustle of the NASA control room or the metal clanging from the interior of the space capsules. The best moments, of course, are those involving space travel or when testing specific vehicles, sound effects which effectively and flawlessly pan in every direction and overhead, generating an immersive soundfield that puts viewers right in the middle of the action. Demo-worthy highlights are the Gemini 8 and Apollo 11 sequences where every clank, rattle and clink reverberate all around and directly above. (Dolby Atmos Audio Rating: 84/100)

Although director Damien Chazelle's approach to the material is to a certain degree questionable and at times distracting, First Man is nonetheless a wonderfully satisfying telling of the Space Race and the Apollo 11 lunar landing as told from the perspective of Neil Armstrong while featuring terrific performances by Ryan Gosling and Claire Foy. The Blu-ray safely lands to home theaters with an excellent but heavily-stylized video presentation and a fantastically satisfying Dolby Atmos soundtrack. Although supplements are rather short and somewhat disappointing, the overall package is nonetheless recommended for fans and history buffs.

Sale Price 8.99
List Price 14.98
Buy Now
3rd Party 6.99
In Stock.
See what people are saying about this story or others
See Comments in Forum
Previous Next
Pre-Orders
Tomorrow's latest releases