After the breakout hit of Se7en, screenwriter Andrew Kevin Walker was a hot Hollywood commodity feeding audiences' appetites for grim and grisly noir-styled thrillers. The story of a private detective hired to determine the authenticity of a snuff film should have been perfect for Walker and a willing director, unfortunately for this reviewer, 8mm just wasn't everything it could have been. I hated it when I saw it in theaters nearly 20 years ago, and time has worked a little in the film's favor - I appreciate its ghoulish exploitation vibe, but it's not earnest enough to be taken seriously nor is it outright silly enough to be a camp classic. 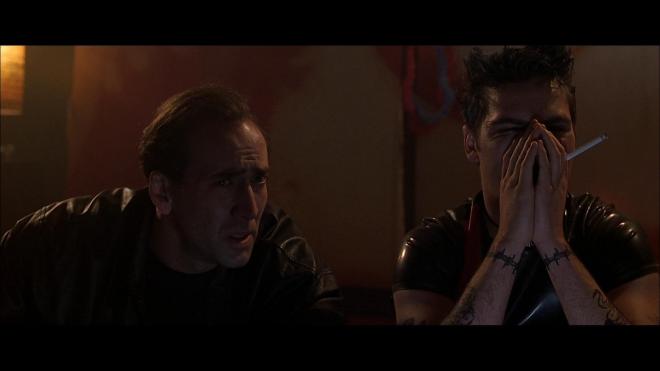 Nicolas Cage gets plenty of opportunities to overreact as the clean-cut private investigator with a smoking addiction Tom Wells. Wells is hired by the rich widow Mrs. Christian (Myra Carter) after she discovers what appears to be a snuff film depicting the graphic death of a teenage girl in her dead husband's belongings. Charged with finding the truth, Wells begins a dark descent into the world of underground illegal pornography with seedy adult store owner Max California (Joaquin Phoenix) as his guide. Together the pair discover the legitimacy of the film and like the 8mm film strip - the danger their search leads them to is very real.

The strength of 8mm lies squarely on the shoulders of Nicolas Cage. When he's in full detective mode he's great. He's committed, focused, and you see those sparks of vengeance-fueled hatred behind his eyes. That's when this film is at its absolute best and you feel some sort of emotional tie to the film. However, he's the audience's guide into this sleazy underworld and that's where the film loses momentum.

Part of what undercuts 8mm is that it was a concept made too late for its own good. High-speed internet and ISDN connections were widely available killing a lot of the shock value this film had to offer with VHS tapes and film strips. Growing up in an affluent school district with somewhat lax child-safe internet security, we were regularly accessing illicit imagery by the 8th grade and leaving them up on the computer lab machines as a joke. If the story 8mm had to tell was going to have any resonance, it needed to have come out in the late 70s or early 80s.

At the end of the day, it's a Joel Schumacher movie. After an onset falling out with Andrew Kevin Walker over the tonal changes and drastic rewrites, Schumacher owns this tepid thriller. I'll give the man credit for trying to go dark with this material after his campy Batman films, but he's just not the right fit and doesn't have the stomach for the truly horrific aspects of the story.

Scream Factory upgrades 8mm to Blu-ray in a single disc non-collector's edition set. Pressed onto a Region A BD-50 disc, the disc is housed in a standard sturdy case with reversible artwork option. The disc loads to a static image main menu with traditional navigation options. 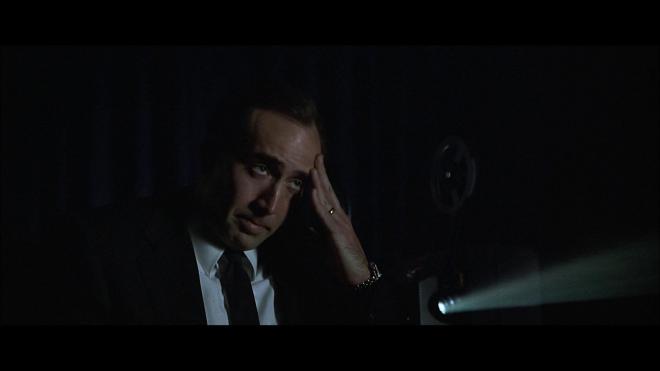 While an absolute improvement over the ancient DVD release, 8mm doesn't look like it's seen much in the way of restoration or remastering work in those intervening years since its first release on disc. Better is a subjective word here as yes, there are some fine qualities to this presentation, but it's still dated, crunchy, and suffers from some iffy black levels that often lead to crush whenever Cage is wondering about in his black suit or trench coat. Fine detail in close-ups are noteworthy but still has a crunchy unrefined quality indicative of an older master. Daylight scenes offer the best dynamics of detail, color, and stable film grain. When the movie gets into darker scenes, it can get a bit rough.

Colors are appropriately drab and dreary for this film. Skin tones can appear a bit pail at times. Primaries don't get a lot of punch as the flick aims for grim and grimy vibe but red gets a lot of pop. Film grain is present and can appear a bit noisy at times but otherwise gives the image a nice filmic appearance. Speckling and hairs are a near constant companion with this presentation. For a film of this vintage that hasn't enjoyed any TLC, this isn't terrible, but far from a pristine picture. 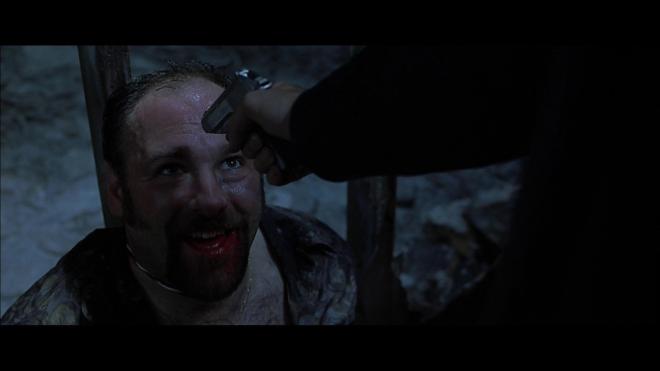 8mm arrives with two audio options, a DTS-HD MA 5.1 mix or a DTS-HD MA 2.0 stereo track. Truth be told, neither is very great but the DTS-HD MA 5.1 mix is the stronger of the two. Softness is the overall problem here as levels are just too low for soft dialogue to come through at normal listening levels. My standard is 15 on my setup for most movies, maybe 17 if it's a quiet show, but I had to punch this past 20 just to hear what was being said half the time. The 5.1 mix offers better spacing of sound elements and the score while the stereo track kinda smashes everything together and is much softer than the full 5.1 track. Even with surrounds engaged, this is still a very front/center heavy audio mix that passes but not with flying colors. 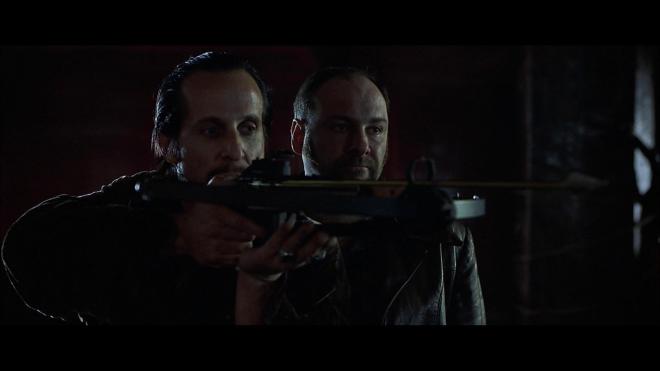 Scream factory assembles a halfway decent assortment of archival bonus features while giving us a new interview with director Joel Schumacher - which is actually a pretty decent watch. He's never been a favorite of mine but the guy can passionately talk about his craft and can handily defend his creative decisions. 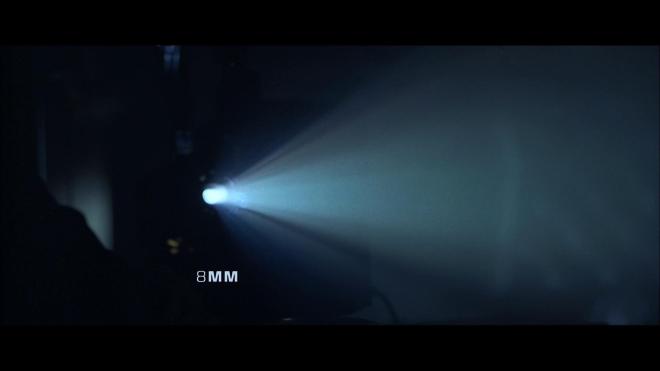 8mm has never been a favorite of mine, but I know people who love it. I didn't connect to it when I first saw it and all these years later it's only marginally grown on me. It cuts too many corners in its depictions and by the time the home stretch arrives the film has devolved into a comic book vigilante plot that would have been more at home with The Punisher than Nicolas Cage.

Scream Factory brings 8mm to Blu-ray but the film's A/V elements show their age with middling results. Bonus features are decent, it's nice to see Schumacher willing to chat about this flick all these years later. If you're a fan, this Blu-ray certainly offers an improvement over the old DVD, but compared to other recent catalog restorations, it's probably not the presentation fans were hoping for. Worth A Look.

Sale Price 21.99
List Price 29.99
Buy Now
3rd Party 21.99
In Stock.
See what people are saying about this story or others
See Comments in Forum
Previous Next
Pre-Orders
Tomorrow's latest releases