A hilarious tale of two con men out for each other, Dirty Rotten Scoundrels remains a funny and memorable film starring one of the most unlikely duos ever. Shout! Factory releases the 1988 film in their Shout Select line with a brilliant new 2k scan. Porting over bonus features from previous releases, Shout! provides a new featurette with co-writer/producer Dale Launer making this release essential for collectors and comedy fans. Recommended. 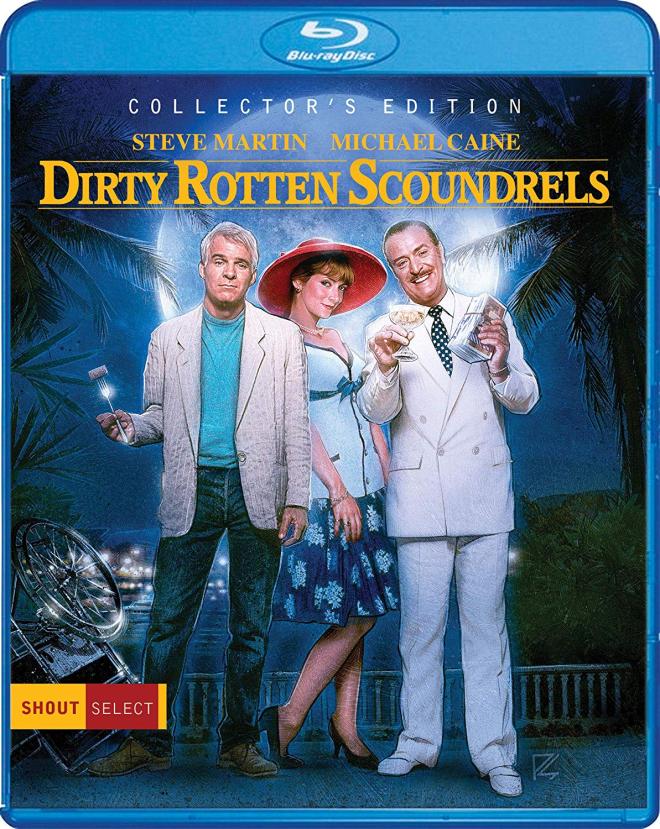 “ It is better to be truthful and good than to not.”

Rarely does a film from your youth have the same impact as it did before you became a jaded and sarcastic old grump. Horror and Action flicks can attain a lasting power far easier than comedies. Jokes either work every time or they don’t, right? At ten years old I discovered Dirty Rotten Scoundrels on HBO one afternoon. It was instantly the funniest film I had ever seen. At ten that isn’t saying much, but you get the point. Having watched the Frank Oz film a few times since the early 90’s it always made me laugh and never felt outdated. However, popping in this new Blu-ray I became worried. Now that I’m the jaded grump will Steve Martin’s antics just annoy me? Will I see through Michael Caine’s suave persona to see his comedic shortcomings revealed?

Set in the fictional Riviera town of Beaumont-sur-Mer, Dirty Rotten Scoundrels opens with sophisticated con man Lawrence Jamieson (Caine) running his usual scheme on a rich and corrupt American woman. Believing Jamieson is an exiled prince financing the work of freedom fighters, the swooning target will easily part with cash, jewels, or whatever she can to further the cause. While on a train Lawrence spots Freddy (Martin), an American hustler working a story about his ailing grandmother to get a few dollars and free meal out of them. When it becomes clear Freddy is aiming his sights on Beaumont-sur-Mer, Lawrence makes an easy call to his handlers ensuring Freddy doesn’t get off that train. The next day, however, Freddy rolls into town with Lawrence’s next mark.

Once Freddy knows Lawrence’s game thanks to one Lady Fanny of Omaha a deal is made: Freddy will become Lawrence’s student in the art of the con. While teaching the scruffy American some culture, Lawrence puts him to work as Ruprecht the “special” brother of his aloof prince character. This tactic scares off the potential brides-to-be once they’ve parted with their donations to the freedom fighters. Disillusioned with playing second fiddle, Freddy decides to leave Lawrence and work solo. Without an easy score, Freddy resorts to blackmailing Lawrence unless the two con men can come to an agreement. “This town ain’t big enough for the both of us” surely would’ve been in the dialogue if this were a western.

The men make a wager to secure 50k from a random woman -- winner stays, loser leaves Beaumont-sur-Mer forever. Enter Janet Colgate (Glenne Headly), the “U.S. Soap Queen”, clumsily falling over luggage and tiny dogs. The distraction, and her awkwardness afterwards, seals the soap queen as the intended target. Predictably, the conmen work to their strengths to fleece Miss Colgate of her money, but it isn’t until the men need to improvise that things take an interesting turn.

Dirty Rotten Scoundrels sets up a fairly simple premise of two con men after the same territory. From the start, it establishes a light comedic tone that covers the gamut between Steve Martin’s goofy physical antics and Michael Caine’s well-timed snooty remarks and impressions. The two actors play off each other with such ease you’d think they were in competition for an improv trophy. Who would’ve thought that Hoagie from Jaws: The Revenge could turn out a performance like this one? Sir Michael Caine can do no wrong! Here, Steve Martin is obviously restrained but is still able to get out his usual schtick when the scene calls for it. Director Frank Oz gives him just enough wiggle room without giving the audience the impression we’re recalling The Jerk. Though some may see the ending coming a mile away, Dirty Rotten Scoundrels succeeds by investing enough into the characters and story that you’ll want to see how it all plays out anyway.

Dirty Rotten Scoundrels is one of those solid recommendations I have in my pocket. With a simple twisty plot, recognizable actors, beautiful locations, and broad humor appropriate for adults and older kids, I’m confident most people will have fun with it. Frank Oz and company crafted a diamond in the rough that hasn’t aged a day in 30 years. That isn’t something you can say about most comedies from the 80’s, right? The jokes still land and the story is interesting enough to engage anyone willing to see a great Steve Martin comedy. I think ten year old Bruce would agree with me.

Dirty Rotten Scoundrels weasels its way onto Region A Blu-ray from Shout! Factory in their Shout Select Line with spine number 61. Presented in a standard keepcase, the package offers a slipcover,  an insert detailing other Shout Select titles, and a reversible artwork featuring the original poster art. The disc loads to a Shout! Factory logo before settling on the static Main with typical navigation options. 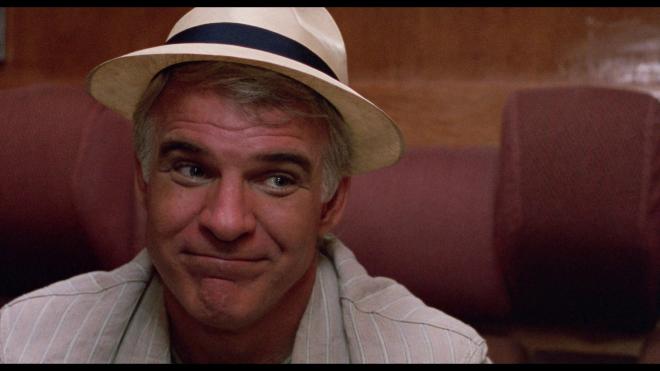 Dirty Rotten Scoundrels arrives on Blu-ray with a 1080p AVC encoded transfer with an aspect ratio of 1.85:1 from a brand new 2k scan. The image is rich with bright primaries and dark black levels. Michael Caine’s impeccable suits are dark and inky as well as his slicked back hair. Film grain is intact adding just enough texture to invoke a sense of refined age without seeming old. Clarity is an issue at times, but detail is solid with facial features and the ornamental jewelry looking fantastic. Skin tones lean red far too often than I’d like to see with such a warm colored film. Interior scenes, like the train from Zurich, contain some noise in the image which combined with the fine film grain keeps this HD presentation from reaching my expectations for the transfer. Gone is the noticeable print damage from previous releases in the film’s final scenes which hampered the viewing experience.

This 2k scan looks great! Bright outdoor scenes are lush and full of vivid detail and color. White sand beaches and flashy cars make for an invigorating sense of excitement with the film’s dynamic color palette. While my experiences with this film range from cable movie channels to the glory of VHS, I’m rather impressed at the HD image for Dirty Rotten Scoundrels. Tiny details on the costuming and locations added a richness to the film’s characters and setting that I’ve never seen previously. While I haven’t had an opportunity to check out the previous MGM Blu-ray some reviews detail print damage and other artifacts affecting the visual presentation. 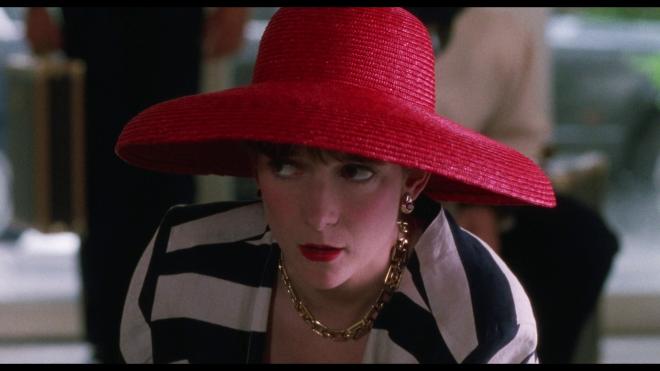 The DTS-HD MA 5.1 is nicely staged with most of the workload coming from the center channel in this dialogue driven film. Front channels allow the audio mix to grow within the scoring and effects tracks nicely. Atmospherics and jazzy scoring elements come through the surrounds just enough to keep you satisfied. Low frequency response is rounded and full with the light jazz tunes bopping and the grandiose orchestral scoring resonating with fullness and ease. The audio mix is well balanced for what we’re seeing on the screen. An easygoing movie needs an easygoing audio mix, right? Dialogue is clearly presented through the front soundstage confidently and volume levels remain consistent throughout the feature. English subtitles available. 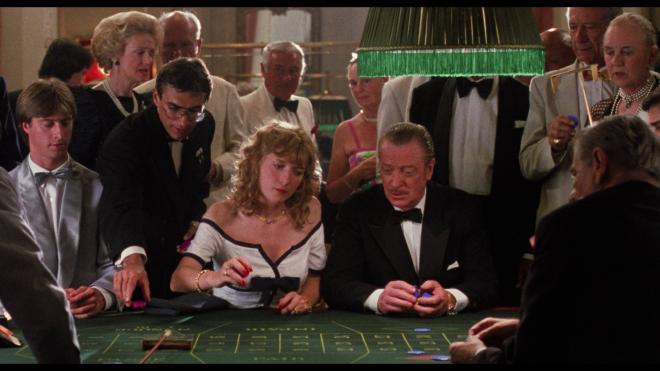 Shout! Factory ports over the special features that originated on the 2001 MGM Blu-ray. Those still hanging on to their vanilla 1997 DVD should no doubt pick up this release for the limited but satisfying featurettes. We have only one bonus feature produced exclusively for this release. 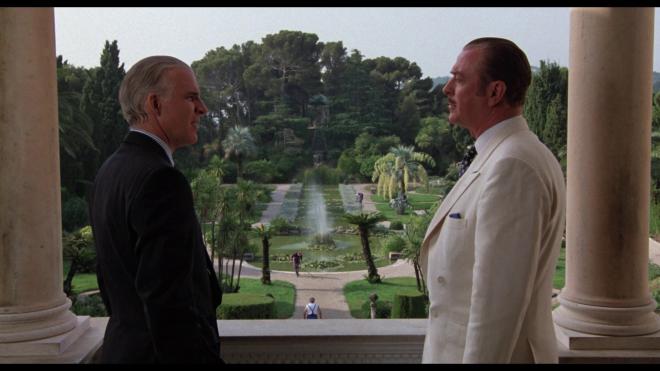 Dirty Rotten Scoundrels pairs together an unlikely duo which resulted in one of the funniest movies ever made. Seeing the weirdly unhinged Steve Martin controlled and yet provided with an interesting character we’re treated to something special, rather than a goofy send-up with Michael Caine constantly rolling his eyes at Martin’s Freddy. I’m looking at you “super glue solvent” scene! Caine and Martin play so well off each other in Oz's breezy film it’s a surprise more films with them weren't planned.

Shout! Factory’s Blu-ray provides a great A/V presentation with their new 2k scan. It cleans up some damage found on a previous HD image and injects some life into the color palette. Those with previous Blu-ray editions of the film should consider upgrading for the better looking image, but without a bevy of new special features I’d say keep your old MGM disc unless you’re a Ruprecht super fan. Recommended.

Sale Price 27.2
List Price 29.99
Buy Now
3rd Party 27.2
In Stock.
See what people are saying about this story or others
See Comments in Forum
Previous Next
Pre-Orders
Tomorrow's latest releases