Bad Times at the El Royale

Like a sordid, grocery-store pulp novel that's just too much fun to put down, Drew Goddard's Bad Times at the El Royale provides a wickedly good time with the latest accommodations at an affordable stay, offering the sort of guilty pleasure without the guilt. Bad times end in violence on Blu-ray with an excellent video presentation and a fantastic DTS-HD Master Audio 7.1 soundtrack. Sadly, a terribly lackluster selection of supplements makes for a rather average package and really only Worth a Look for loyal fans.

Even after a couple of days of deliberating, I'm still not sure what to think of Bad Times at the El Royale. And that's actually meant as a compliment because the characters, story, and visuals continue to linger in the back of the mind long after the movie is over, yet it left me wondering what the heck I just watched or if there was even a point to the violent absurdity. Much like the titular motel, the whole fiasco is extravagantly decorated, made to look as though more intricate and elaborate — from the stage design, costuming and imaginative camerawork — than it really is. The El Royale still maintains some semblance of its genteel glory days, but upon closer inspection, the place feels cheap and vacant. Again, this is not to disparage what writer/director Drew Goddard and his production have accomplished. For in its simplicity, we are given a straightforward, undemanding tale that's wildly entertaining and memorable, a deliciously wicked story of happenstance engrossed in vintage elegance.

And that in itself is perhaps Goddard's point — to simply be a good time at a cool place, but for one night, it's neither cool nor a good time. The neo-noir crime thriller is a reminder that not every movie needs to be enjoyed from some intellectual perspective or that every story must progress towards a momentous, climactic revelation that affects the protagonist in a deeply meaningful way. All the characters' motives and intentions are made pretty clear and blatant as they arrive at the motel and while they don't share their secrets with one another, they each remain relatively the same person as when they checked in. Jeff Bridges' priest arrives with a determined purpose, as though looking for something but always with an air of unsureness and doubt. Cynthia Erivo's soulful singer Darlene is similarly balancing a hope for a more successful future with a great deal of hesitancy and lack of confidence while also running away from her past. It's no wonder these two soon bond and form close ties. 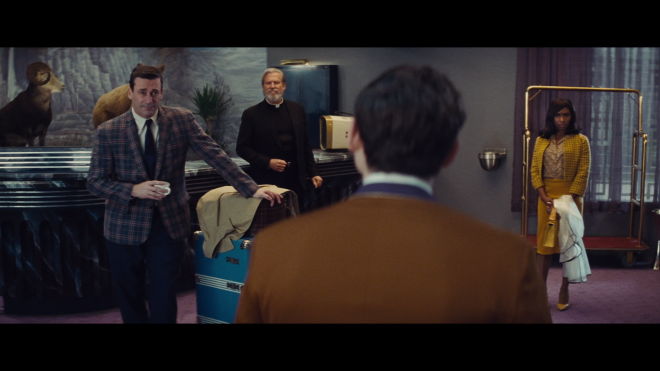 The same pretty much goes for the rest of the ensemble cast. However, a case could be made for the motel's concierge Miles Miller (Lewis Pullman) as perhaps the most innocent of the bunch, a seemingly timid and reluctant young man who squirms at the sight of the violence suddenly erupting around. Yet, there's a sense he's carrying a great deal on his shoulders, weighed down by the secrets of others while hoping for release from them. Meanwhile, Jon Hamm's traveling salesman plays the Southern gentleman to the point of maddening since he's so convincingly rude and entitled in his search to maintain secrets and introduce the MacGuffin. At the same time, sisters Emily and Rose Summerspring (Dakota Johnson and Cailee Spaeny) amplify the tension and general air of unease by inviting the terrifying charms of cult leader Billy Lee (an awesome Chris Hemsworth). Each of these people is in search of something, mostly hope, opportunity, and absolution, but they go about obtaining those elusive abstracts through morally-questionable and outright sinful deeds.

In El Royale, the plot plays out like a series of completely random events that somehow also feel fated to have happened. The gods are playing a deadly game of roulette with the lives of these strangers — wretched, lonely souls who have coincidentally converged at a once celebrated and ultra-hip motel. Where there was once life and celebration, there is now death and despair on this cold, rainy night. And Goddard does an excellent job at turning the preordained escapade into one cool, happening occasion. The crime thriller blends the unpredictable mystery of Identity with the suspense of Psycho while oozing in the sinister beauty of classic noir and as if it were told by Quentin Tarantino. The film doesn't strive to be anything more than what it actually is, reminiscent of the sordid pulp novels from decades ago, the sort we find tempting us to purchase at the check-out aisle of the grocery store. We're supposed to feel guilty for enjoying this kind of trashy material, but such guilty pleasures are so much fun not to revel in their enjoyment.

20th Century Fox Home Entertainment brings Bad Times at the El Royale to Blu-ray as a two-disc combo pack with a flyer for a Digital HD Copy. With a glossy cardboard slipcover, the Region Free, BD50 disc sits comfortably opposite a DVD-9 copy inside a blue, eco-cutout case. After skipping a few trailers at startup, viewers are taken to a menu screen with full-motion clips and music playing in the background.

Bad times come to a sudden and violent clash on Blu-ray thanks to a splendidly beautiful 1080p/AVC MPEG-4 encode, igniting the screen with brilliantly, spot-on contrast that showers the action with enigmatic energy and vivacity. Black levels are inky dark with an ominous grimness, bathing the bizarre story with a sense of dread and horror lurking right around the corner while providing the 2.39:1 image with a lovely cinematic quality. Shadow details maintain excellent visibility during the bleakest moments and within the murkiest, pitch-black corners.

The palette in Seamus McGarvey's heavily-stylized cinematography animates the screen with a groovy, dazzling array of secondary hues, like the fiery warmth of yellows and oranges on the California side or the lustrous, royal purples on the Nevada side. Meanwhile, primaries are richly-saturated and full-bodied, keeping the mayhem ironically upbeat and eye-catching, and flesh tones appear healthy with revealing lifelike textures.

Shot on traditional 35mm film, the freshly-minted transfer drives a long distance with a razor-sharp definition and clarity, exposing every nook and cranny of the motel. The tiniest object and elaborate detail decorating the walls and background are plainly visible, and each stitch and thread in the groovy clothing is distinct. There are couple softer moments here and there, but on the whole, the HD video is highly detailed awash with a fine layer of film-like grain, giving fans a fun, visually-pleasing presentation. (Video Rating: 90/100)

The neo-noir thriller erupts into action with a fantastic DTS-HD Master Audio 7.1 soundtrack that sets home theaters ablaze as the friction between characters boils to calamity. Admittedly, the design is really more of a front-heavy presentation, keeping audiences' attention on the conversations with precise, well-prioritized dialogue. However, the loud bang of gunfire reverberates across the room, and a heavy downpour surrounds the listening area on several occasions, generating a fairly satisfying and immersive soundfield. Other ambient effects discretely pan between the surrounds with the more memorable moments taking place during the climactic lobby battle where we can hear the rain outside and the fire pits ablaze or suddenly frightened by the unexpected burst of thunder.

The design delivers expansive and spacious imaging, creating an amazing wall of sound that's nearly consistent from beginning to end with convincing off-screen effectiveness and excellent balance. With incredible fidelity and flawless clarity, the action is showered in superb acoustical detailing, sharply-defined highs and distinct, room-penetrating mids, which is most appreciated during the many awesome song selections. Although it never hits ultra-low depths, the low-end is nicely responsive and palpable, providing the rumbling boom of thunder and the music with wall-rattling impact and presence. (Audio Rating: 86/100)

Although the film lingers in the back of the mind long after it is over, Bad Times at the El Royale leaves one wondering what the heck they just watched or if the violent absurdity even serves any purpose. In the end, Drew Goddard's neo-noir crime thriller is a reminder not every movie needs to be watched with some intellectual curiosity, but it can be simply enjoyed like a sordid, grocery-store pulp novel that's too much fun to put down. Bad times end in violence on Blu-ray with an excellent video presentation and a fantastic DTS-HD Master Audio 7.1 soundtrack. Sadly, a terribly lackluster selection of supplements makes for a rather average package and really only Worth a Look for loyal fans.

Sale Price 8.98
List Price 26.99
Buy Now
3rd Party 3.59
In Stock.
See what people are saying about this story or others
See Comments in Forum
Previous Next
Pre-Orders
Tomorrow's latest releases