A romantic comedy classic about an evolving relationship between two disparate friends, When Harry Met Sally remains a funny and heartfelt example of the genre done right. For its 30th anniversary, Shout Factory has put together a lovely new Blu-ray release, complete with a restored HD transfer sourced from a 4K scan of the original camera negative. A new retrospective conversation between director Rob Reiner and star Billy Crystal also rounds out the package, cementing this disc as a very solid double dip. Recommended. 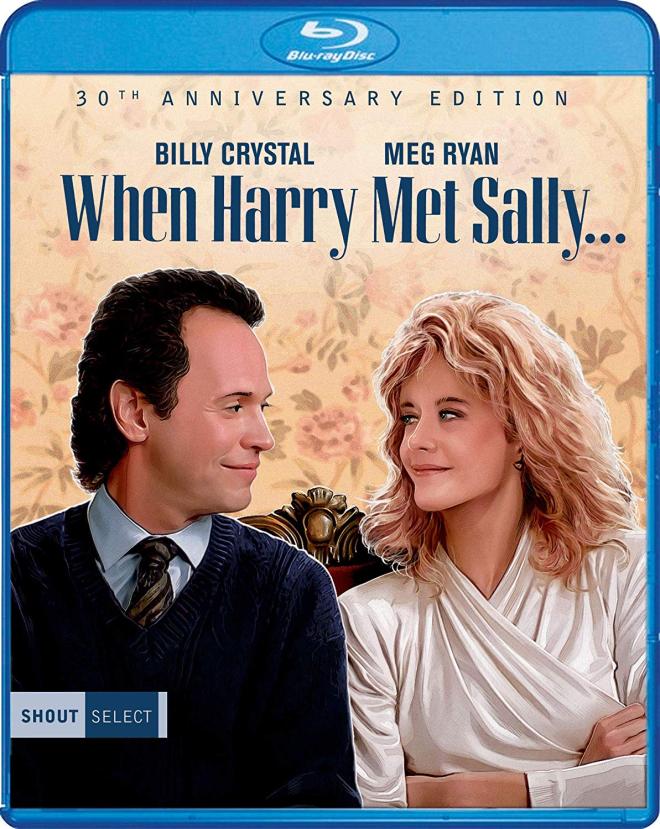 Relationships are messy, complicated, tortuous, confusing, and absolutely wonderful little things. In the hands of the right filmmaker, they're also pretty damn entertaining to watch. Taking his cue from the works of Woody Allen, director Rob Reiner's When Harry Met Sally struck quite a chord with audiences when first released in 1989, and continues to entertain and delight 30 years later. Telling the simple (or perhaps not so simple) story of boy meets girl, Reiner taps into the collective unconscious of the dating world -- coming away with a funny, sweet and, above all, honest look at the painful, joyous, unknowable mystery that we call love.

The plot revolves around two wildly different (but equally neurotic) individuals -- the positive yet uptight Sally (Meg Ryan) and the laid back yet cynical Harry (Billy Crystal) -- as they unintentionally run into one another over the course of a decade and go on to develop a deep friendship. Eventually, it seems like romance might be blooming between the unlikely yet somehow perfect pair, but complications arise that could destroy any chance at a real relationship.

The script is a charming and intelligent examination of the stark differences and unifying traits that separate and attract men and women. Culled from the collective life experiences and personal stories of screenwriter Nora Ephron and director Rob Reiner, the story feels real and truthful, while always remaining entertaining and engaging. The early portions of the plot are structured like a series of vignettes, featuring comedic and insightful conversations between Harry and Sally as they serendipitously meet over the span of several years.

Ultimately, the story settles into a single time-frame but still predominantly plays out through dialogue heavy scenes fueled by clever back and forths between the film's two stars. Ephron's observations about relationships and frank portrayals of the inner workings of both sexes are smart and playful, revealing the hidden truth behind what men and women are really thinking. In fact, several scenes, concepts, and lines of dialogue are so on the money that they have become cemented into the very zeitgeist of society, destined to be eternally quoted and referenced by bickering couples for all time.

But beyond its continual pop culture relevancy, what really makes the movie work as well as it does, are its richly textured characters. Harry and Sally are both full, deep, beautifully realized creations, and the combination of Ephron's script and the actors' performances immediately endear all of their humorous eccentricities to the audience. Crystal and Ryan become the embodiment of cinematic chemistry, bouncing off each other like only the very best silver screen couples can. In many ways they are the polar opposites of each other and their clashing idiosyncrasies provide the movie with much of its wonderful humor. And though the banter between the two is certainly marvelous, Crystal's silent, bewildered reactions prove to be just as memorable as any of the lines they utter.

Beneath the comedy and jokes, both of these lonely individuals have true, beating hearts, and the story never shies away from the drearier, complicated realities of their up-and-down journey toward love. As pointed out by the filmmakers in the special features, unlike most contemporary movies of this type, there are no real external obstacles or exaggerated contrivances keeping them apart. Instead, their conflicts are of the internal variety. This leads to a conclusion which really allows the characters to grow and develop in meaningful ways by working through and even embracing some of their own hang-ups and neuroses.

Not wanting to upstage the wonderful dialogue and performances, Reiner mostly adheres to a modest style, placing the focus on his actors and their words. However, that isn't to say that the proceedings are completely free of notable cinematic touches. DP Barry Sonnenfeld creates an engaging but appropriately understated aesthetic, and the filmmakers do display a great sense of comedic timing with their staging and editing choices. The scene with Harry and his friend Jess (Bruno Kirby) discussing Harry's divorce while at a football game is a great example. Caught in a celebratory crowd wave, Harry's sad story gets hilariously deflated as the pair are repeatedly forced to stand up and join the crowd, offering a perfectly timed juxtaposition that remains one of the movie's funniest gags.

Split screen is used to great effect as well, making fun comparisons between characters while simultaneously and paradoxically drawing them closer together and further apart on screen. Reiner also employs an interesting structural motif, ending various segments with sit-down interview confessionals between elderly couples describing how they first met and fell in love. These recurring stories, aside from simply being sweet diversions, serve to expand upon the deeper themes of the film while foreshadowing its eventual conclusion.

When Harry Met Sally is a perfect example of the romantic comedy genre done right. A shining collaborative effort between some very funny and talented individuals, the film is an intelligent, humorous, and warm examination of our often numerous and puzzling contradictions, and our universal desire to find comfort in the arms of someone we love. The simple questions the movie raises about relationships may never be fully answered, and men and women may never fully understand one another, but as the film so simply demonstrates, that may not really be such a bad thing after all.

Shout Factory presents When Harry Met Sally on a Region A BD-50 disc housed in a keepcase case with cardboard slipcover. After some logos and warnings, the disc transitions to a standard menu. 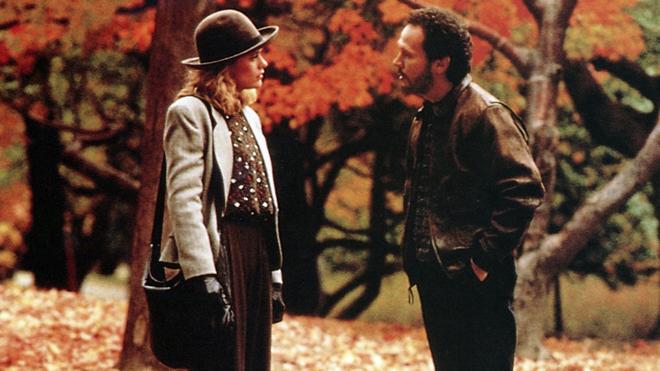 The movie is provided with a 1080p/AVC MPEG-4 transfer in the 1.85:1 aspect ratio. Sourced from a new 4K scan of the original negative, the video offers some notable improvements over the last release -- even if the overall palette does seem a little too punchy at times.

The print is in great shape with a light layer of grain preserved throughout. With that said, compared to the previous MGM disc, grain is often more subdued here. Thankfully, even if some moderate noise reduction has been employed, the typical unwanted side effects of DNR are absent. Detail is nicely rendered with a pleasing sense of fine texture, offering a slightly greater sense of dimension compared to the older transfer. Likewise, colors often display a notable increase in saturation here, offering more vibrant primaries. Faces, in particular, carry a rosier complexion and certain wardrobe choices, like one of Sally's red sweaters, pop quite intensely from the screen.

But while I generally find the palette here to be an improvement over the comparatively dull and flat style found on the old transfer, there are times when colors seem to be boosted a bit too much, and skintones can vary a little between different angles in isolated scenes. Unfortunately, it's hard to say which presentation is more authentic to the original theatrical look, but even if the color timing has been revised for this new transfer, the results are pleasing and still in line with the modest content. Finally, black levels and contrast are both nicley balanced with no problems related to crush.

Offering a few welcomed upgrades over the old transfer, this new scan results in a lovely video presentation. Though the increased saturation does give me some pause, the overall benefits here are still clear. 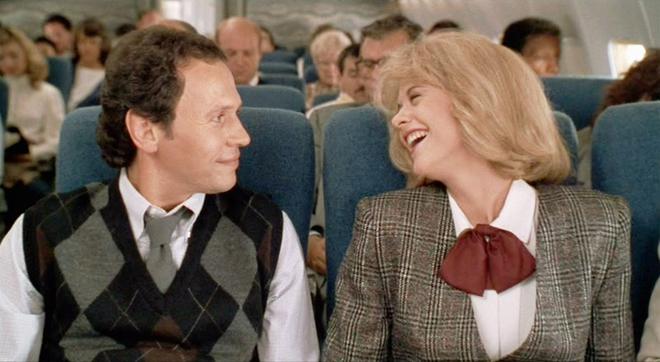 Since the movie is almost exclusively a series of conversations, it should come as no surprise that this track is primarily dialogue driven. Thankfully, speech is crisp and easy to understand. Directionality is kept to a minimum, but key scenes like the football game and a few split-screen sequences employ appropriate separation and left to right panning. Outside of some faint effects and echoes of the score, surround use is pretty subdued. As one might expect, LFE isn't really much of a factor either, but some music selections carry pleasing bass. Balance between the dialogue and… well, the rest of the dialogue, is handled nicely, and all of the movie's famous quotable lines come through without any issues.

The audio gets the job done, but rarely takes advantage of being a 5.1 mix. Still, the presentation is suitable for the material and a more robust remix would have been out of place.

Shout Factory has compiled a very nice assortment of supplements, carrying over all of the special features from the last release while adding a brand new interview with Billy Crystal and Rob Reiner.

Even after 30 years, When Harry Met Sally remains a romantic comedy classic, effortlessly defying the sometimes banal trappings of its genre. The story is funny, touching, and filled with frank, smart observations. The new video transfer offers some welcomed improvements over the last release, and the modest audio mix remains fitting for the content. A new retrospective interview joins all of the same supplements from the previous Blu-ray, rounding out a very respectable disc and a solid double dip. Recommended.

Sale Price 12.96
List Price 29.99
Buy Now
3rd Party 7.77
In Stock.
See what people are saying about this story or others
See Comments in Forum
Previous Next
Pre-Orders
Tomorrow's latest releases