Spike Lee delves into the reign of terror inflicted upon an entire city by the hands of a homicidal madman in Summer of Sam. Lee's epic look at New York during a tumultuous time of change and extreme heat may be a little too sprawling for its own good, but it remains an intense look at the effects of terror and fear. Kino Lorber Studio Classics gives Summer of Sam a solo release using what appears to be the same A/V presentation as the 2014 release but gives the bonus features package a slight upgrade with a new interview with John Leguizamo. If you missed out on the previous set - this one is Recommended.

The summer of 1977 was a hot one. Record heatwaves strained the city's electric grid while a madman with a 44. terrorized people at night maiming and killing indiscriminately. Detective Petrocelli (Anthony LaPaglia) and his partner Atwater (Roger Guenveur Smith) are so desperate, they turn to local mob color for help. Vinny (John Leguizamo) was very nearly one of the madman's victims as he cheated on his wife Dionna (Mira Sorvino) with her cousin. Shaken by the experience, Vinny has to come to terms not only with the terror gripping the neighborhood but the cultural change around him as his best friend Richie (Adrien Brody) returns home a very different man. 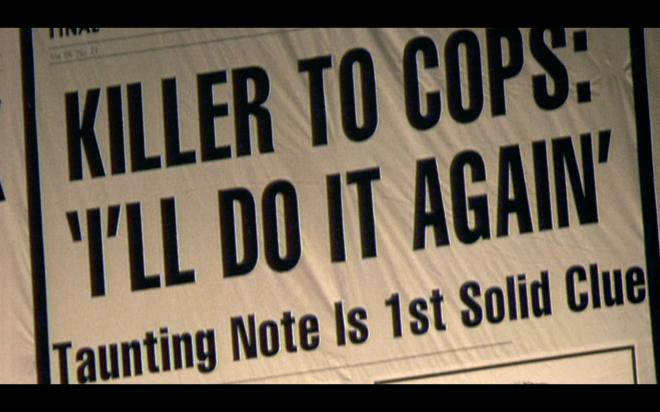 Summer of Sam may not be one of Spike Lee's best efforts - but it's far from his worst. Largely dismissed from theaters and then nearly forgotten entirely in the years since, this thriller is more preoccupied with the mindset of a populace than it is depicting a full-on gory and graphic biopic of the infamous David Berkowitz. Famous for claiming he took orders to kill from his neighbor's dog, Berkowitz - played here by Micael Badalucco - sits a far backseat to an eclectic range of characters.

While some may have wanted a gritty and grimy biopic of the killer, I was happy to get a movie not about the killings themselves but how they affected people. New York with it's tightly knit communities and cultures offers a broad canvas to explore this theme. As Vinny struggles with seeing the bodies of two people that he very easily could have been among, he takes it as a sign to reform his lifestyle and become the honest true husband he always should have been. But as Son of Sam's attacks increase and the body count rises he can't hold it together as paranoia allows him to be convinced that his own best friend could be the .44 killer.

If Lee and his writers had kept to that idea with some small interjections by the NYPD's turn to the local mafia for help finding the madman, that would have been enough. But there's a lot more going on here. Peppered throughout the film in the form of Richie's growing career as a punk musician/male escort while Vinny's rampant infidelity provides a linkage between sex and death as some sort pseudo-allegory for the impending AIDS crisis.

At least I think that's what Lee and his fellow screenwriters Victor Colicchio and Michael Imperioli were aiming for. It's the only thing that I can come up with that makes these long tangents to a swingers club or a seedy strip joint make any sense at all. Regardless of intent behind Vinny's sexual misfortunes, at 142-minutes, Summer of Sam suffers some sizable bloat. In an attempt to give a view of events from a wide variety of characters it loses a lot of focus to the point that it feels like the show has become a different movie entirely. Shave 20 minutes off this creature and you'd have a lean mean beast that would probably work a lot better.

When Summer of Sam hit theaters in 1999 I was 18-years-old working my first real job at a new movie theater that opened in my home town. It was a great gig that let me scam some free movie posters, get cheap snacks, and go to the movies a lot. Every shift I'd get a 45-minute break and I got pretty good at scheduling my breaks in time with the beginning, middle, and end of the movies we had playing. I watched Summer of Sam at least a half-dozen times. While I didn't think it was perfect - and still don't - I appreciated its style and what it was going for. It wasn't Silence of the Lambs or The Bone Collector. It wasn't trying to be a tried and true police procedural thriller. It tried its best to showcase average people living in an extreme situation. It may not entirely be successful, but Summer of Sam gets more right than it misses.

Summer of Sam terrorizes Blu-ray for the second time - this run from Kino Lorber Studio Classics. Pressed on a Region-A locked BD-50 disc, the disc is housed in a standard sturdy Blu-ray case. The disc loads to a static image main menu with traditional navigation options.

Without any info to the contrary, this 1.85:1 1080p transfer appears to be the exact same one sourced for the 2014 The Spike Lee Joint Collection Vol. 2 set that has gone out of print. Not to say that it is a bad thing. Easily outpacing the old DVD, this disc exhibits pleasing details, a strong natural-looking grain field, bold colors, and is overall in pretty decent shape without any notable age-related defects. Aside from some slight compression issues with a little ringing and what looks like some intentional smoothing for some of the more flashy sequences, this transfer looks pretty great.

Close-ups, middle shots - give plenty of facial feature detail with clothing and object textures intact. Grain structure is apparent - more highlighted depending on the style of the shot. The film's always had a bit of a skewed color pallet so primaries have a very purposeful pop depending on any scene in question. Black levels are nice and inky giving the image some nice depth - particularly when Vinny and his pals are hanging out on the block. While it would have been great to get a new restoration effort for this release, one does have to remember this title falls under Disney's back catalog and they've yet to treat anything that isn't kid friendly, Marvel, or Star Wars to any decent restoration effort. All in all, this is solid. Not as good as it possibly could look, but it'll do.

Summer of Same comes packed with the same DTS-HD MA 5.1 and 2.0 audio mixes that were available on the previous disc release. The good news is they both still hold up nicely. If you're rocking the full surround set up the 5.1 is nice, gives the show a presence of open space and dimension. Surrounds really pick up during active sequences such as discos, or crime scenes where the cops are milling about stepping on broken glass; it's solid surround work. Comparison the 2.0 mix feels a bit tighter which can add a nice sense of claustrophobia - but isn't as dynamic. Dialog for both mixes are on point and the levels for both tracks are on point without need for monitoring. It's dealer's choice so pick the track that sounds right for your setup and enjoy.

Maybe not the most robust assortment of bonus features - the audio commentary is classic so it's a great listen, and then the new interview with Leguizamo provides a nice interesting "look back" at the film.

Summer of Sam may not be Lee's magnum opus, but it's an often forgotten gem in his catalog. It's less about the killer than the wild upheaval one individual can cause a populace. Featuring some truly great performances from its cast, the film may become a little unwieldy with some middle character moments about sexual and cultural revolution, but overall the film is a claustrophobic odyssey of paranoia. Kino Lorber Studio Classics helps fans who can't afford grey market prices add Summer of Sam to their collections. Using the same video transfer and audio mixes, the film still looks quite good but would benefit from a full restoration while the audio commentary is a great listen and the new Leguizamo interview gives a nice look back at the film. Overall, this is a sold show well worth checking out - Recommended.

Sale Price 16.8
List Price 29.95
Buy Now
3rd Party 11.71
In Stock.
See what people are saying about this story or others
See Comments in Forum
Previous Next
Pre-Orders
Tomorrow's latest releases