Spike Lee crafts a searing whodunnit thriller mystery Clockers about a 24-hour "Clocker" caught up in the middle of a murder mystery that may or may not have been committed by his brother. As time runs out, only a tenacious veteran detective is interested in uncovering the dark truth. One part crime exposé one part murder mystery thriller, Clockers proves to be one of Lee's better more commercial efforts while maintaining his unique narrative filmmaking style. Kino Lorber Studio Classics releases Clockers to Blu-ray with a solid A/V presentation. Recommended.

Strike (Mekhi Phifer) is trying to find his own path in the world. Working as local drug kingpin Rodney's (Delroy Lindo) protege seems to be the best way to earn. His brother Victor (Isaiah Washington) has gone the straight and narrow line of honest - if low paying work - to make it. When a local dealer ends up dead, Detective's Mazilli (John Turturro) and Rocco Klein (Harvey Keitel) treat it like any other hood hit. When Victor confesses to the crime seemingly out of nowhere, Mazilli is content - case closed. Rocco, on the other hand, seems to be the only man who gives a damn about the truth. 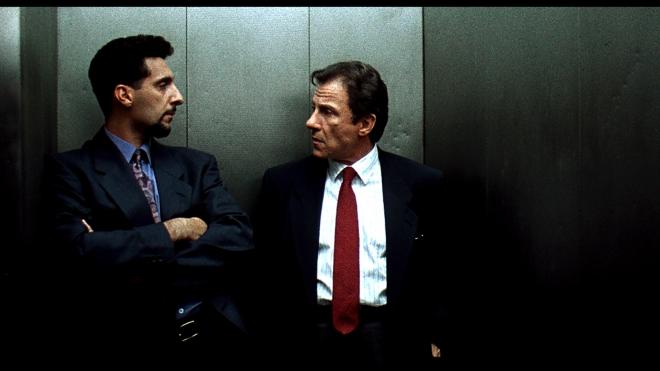 One of the things I love about Spike Lee's work - especially his early-mid 1990s material is the feeling of authenticity he brings to the material. For a murder mystery thriller, the film takes its time to set the stage, the players, and the tough world they live in. Strike doesn't feel like he has anywhere to go but sideways and clock. Victor busts his ass day and night for a fraction of the scratch Strike earns in an hour dealing. Rodney is a smalltime player angling up his position in the pond seducing youngsters like Strike to do his shill work at no risk to himself. Mazilli and Rocco have been cleaning up the aftermath of street shootings and random killings so long, justice rarely enters into the equation anymore. It's the one murder of a random low-level dealer that charts all of these characters into a collision course.

I don't toss around the word "vile" often because it's an extreme reaction that's rarely warranted, but when Rocco and Mazilli begin their investigation by examining the body at the crime scene - that's the only reaction I have. With each turn of the man's body, they make horrific dehumanizing comments about his appearance, smell - you name it. It's a vile moment. But it's also an important moment in that it establishes how inured these detectives have become to the daily life they live. Neither men actually care about the victim - that is until Victor's confession.

This is the moment I love Clockers. The movie already was a solid piece of work but for Harvey Keitel's Rocco - it's a character-defining moment. He could take Victor's confession at face value. Close the book. Go home. But he doesn't. While jaded and exhausted, there's this small piece of him that still believes in the truth and justice of his job. There isn't a family of the dead drug dealer calling for the investigation, it's a personal piece of his soul he has to satisfy or become truly lost like his partner. The rest of the movie then hinges on his investigation and Mekhi Phifer coming to grips with the reality of his own situation.

I don't want to chatterbox away about this one much more than I already have simply because I've reached that point where some pretty obvious spoilers start to creep in. If I was to level one criticism at Lee's little murder mystery is that he doesn't stretch the breadcrumbs long enough. Before the reveal, a number of plot beats have already laid bare some of the twists, so when these key moments do happen they don't punch as hard as they could have. But by that point, you've already enjoyed 80% of a really impressively acted, directed, and executed thriller that a slightly less satisfying ending is actually forgivable. It'd been years since I last watched this one all the way through as it was a constant companion when I had cable as a teenager so it was a fun run to take. It may not be Spike Lee's best, it's middle Lee but it's still very good and one well worth checking out if it passed you by.

Clockers arrives on Blu-ray courtesy of Kino Lorber Studio Classics in a single disc set. Pressed on a Region A BD-50 disc, the disc is housed in a standard sturdy case. The disc loads to a static image main menu with traditional navigation options.

Clockers enjoys a colorful, detailed 1080p 1.85:1 transfer. Whenever catalog Universal titles finally make it to Blu-ray - I'm usually a little worried about compression issues as dated edge enhancement frequently lingers for old masters. While this doesn't quite sparkle like a new 4K restoration, it is thankfully free of any notable compression issues leaving a natural grain field and a nicely film-like presentation. Shot on a combination of 16mm and 35mm, grain can fluctuate from heavy (16mm) to clean and nuanced (35mm). The 16mm gives the image a welcome gritty feel to it that adds a lot of intensity to character interactions. This isn't a guns-blazing crime saga, it's mostly a tightly scripted character interactions and Malik Hassan Sayeed's photography goes a long way towards adding some visual intensity to these moments. Details are uniformly very good - again dependent on film stock. There are a couple of moments of softness, but they're minimal occurrences. Colors are bold allowing for a lot of primary punch even when they're not being intentionally processed or skewed for effect. Black levels are deep and inky giving the image a welcome three-dimensional presence.

Clockers completes its A/V presentation with a pair of audio tracks that deliver - DTS-HD MA 5.1 or DTS-HD MA 2.0 stereo. Both are great so it's dealer's choice which suits your needs. Dialogue is clean and clear throughout. Sound effects have great resonance and placement with Terence Blanchard's great score filling things out. If I had to pick one over the other, I'd call the 5.1 mix simply because it offers some more spacing. This mix is largely a front/center affair but the sides and rears get their moments to work and provide some atmosphere. Again this isn't an action-packed flick so the dynamic presence of the surrounds isn't as prominent. Either way, both tracks are clean clear without any level issues.

Unfortunately, this release of Clockers doesn't offer much in the bonus features department beyond an audio commentary track featuring Film Critic Kameron Austin Collins. It's a great track and informative, but there's nothing quite like having Spike Lee talk about his material himself.

Clockers may not be Spike Lee's greatest achievement - and certainly not of the 1990s - but it's a perfectly good movie. An entertaining thriller with punches of a whodunnit but like most Lee films, it doesn't shy away from social commentary as one cop dedicates himself to finding the truth of a murder. The cast including Mekhi Phifer, Harvey Keitel, John Turturro, Keith David, Delroy Lindo, and Isaiah Washington are worth the price of admission alone.

Kino Lorber Studio Classics brings Clockers to Blu-ray with a solid video transfer and a pair of great audio mixes to match. Bonus features may be a bit slim, but the audio commentary is still worth a listen. If you're a fan of the film it's well worth picking up. If you missed Clockers, it's worth making the time for. Recommended.