Night School is further proof that Kevin Hart is at his best when he's part of a genuine comedy/action duo or within an ensemble cast of colorful characters. A rote by the numbers comedy plot that doesn't really go anywhere allows him to be funny at times, but genuine scripted material shortfalls allow for too much improv shtick that grinds the film and the laughs to a grating dead stop. It may not be the funniest movie ever but Universal Studios lets loose a technically terrific Blu-ray with a solid A/V presentation. Bonus features are also pretty decent. For an average Kevin Hart movie, it's not terrible and there are enough genuine laughs to make it Worth A Look.

Kevin Hart keeps to his comedy routine as the fast-talking diminutive Teddy Walker. Teddy is a successful Barbecue grill salesman who lives way, way beyond his means and is madly in love with his girlfriend Lisa (Megalyn Echikunwoke) who is way out of his league. Lisa doesn't know that Teddy never graduated high school and is actually up to his eyeballs in debt. After proposing to her, Teddy accidentally blows up the grill store he was set to inherit from the owner. Now in order to get a job at his pal Marvin's (Ben Schwartz) financial management firm, he's got to secretly go back to high school to get his GED. The only problem his old bully Stewart (Taran Killam) is the principal and his teacher Carrie (Tiffany Haddish) isn't going to let him slide on his heaps of charm. 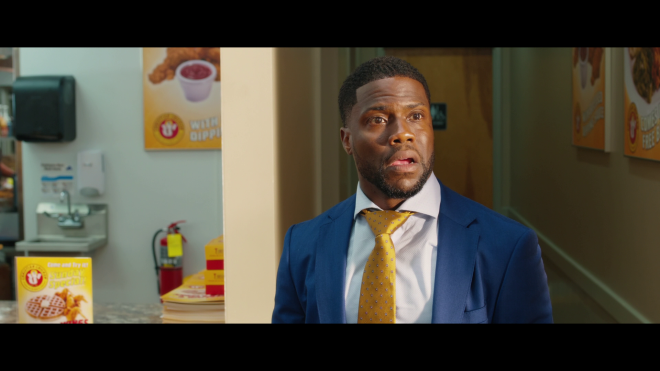 I don't mind average uncomplicated comedies. The plot doesn't have to be the most clever thing in order for me to be entertained. The great 80s comedies got by with a simple premise, charmingly talented leads, and smart well-timed scripts. It's the last element that eludes Night School. You can tell when the movie is on point and the joke was actually written and tested - because it's hilarious. Because those moments are so damn funny - like when Teddy blows up his store is flung through the air in a fireball and smashes into his Porsche, it's actually damn funny. When he tries to get out of his expensive restaurant bill by ripping out pubic hair and sprinkling them on the dessert and then arguing with the waiter - the funny doesn't happen.

That's pretty much the pattern through the run of Night School. After some fun work on Girls Trip, The Best Man's Holiday, and my fond memories of Undercover Brother, I was a little excited to see what director Malcolm D. Lee could cook up with Kevin Hart in the lead. While most of the film is decent, it's the film's over-reliance on motor-mouthed shtick from Hart and the rest of the cast including Haddish, Mary Lynn Rajskub, Romany Malco, and Rob Riggle that brings the film and the humor to a complete dead stop. I know you've got to try multiple takes and jokes and allow your cast to work the material a bit, but everything is routine for these actors. If you've seen Malco, Riggle, or Rajskub do their standard bits in other movies or shows, you've pretty much seen everything they brought to Night School. Their characters' need for attending night school doesn't influence the comedy in the least and it's a shame because it's a missed opportunity for genuine heartfelt laughs.

The film is at its best when it's actually exploring the personal nature of having to go back to school. It's awkward and maybe a bit embarrassing to have to go down that path. To be successful with a vision forward and then suddenly having to work at a Biblically-themed fried chicken shop to make ends meet while going to school is funny but also relatable. When the film is being honest with itself is when it's genuinely funny. When it's trying to pad out the runtime with a barrage of lame jokes involving poop, pubes, or other bodily substances with motor-mouthed improv shtick, Night School loses ground and fails to make the grade.

Night School is brought to Blu-ray courtesy of Universal Studios in a two-disc Blu-ray + DVD + Digital set. The discs are housed in a standard two-disc eco-friendly case with identical slipcover artwork. The disc loads to trailers for other upcoming Universal releases before arriving at a static image main menu with traditional navigation options. 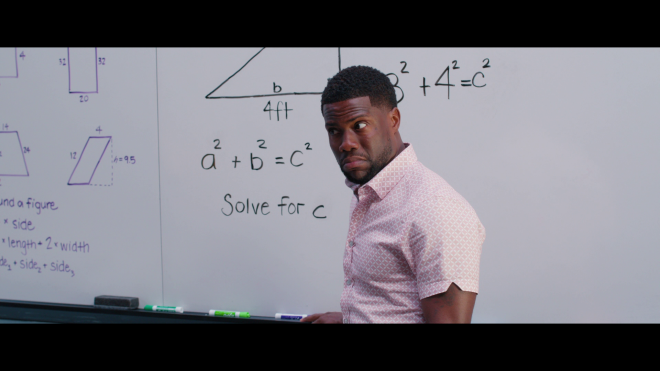 Bright. Colorful. Digitally sourced. Night School offers up a clean and clear, a well-detailed image with a vibrant color pallet that is standard for this era of comedies. Fine facial features, hairstyles, and clothing look terrific allowing for you to soak in all the details. It's actually pretty fun when the movie moves into the past showing Teddy in high school as it attempts to make Kevin Hart look 17 years younger than he is. Flesh tones are healthy and natural looking while the whole color pallet pushes primaries with nice bright reds, blues, and yellows. Black levels and contrast are on point giving the image a well-defined sense of depth. There is a little bit of occasional banding here and there, but nothing very serious. All around a clean image that looks great on Blu-ray. 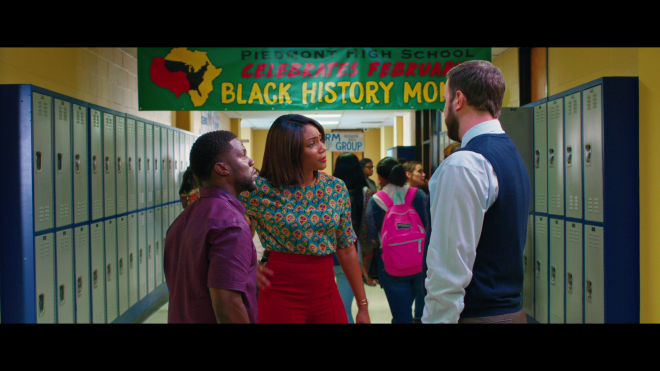 For a routine comedy, Night School a gets a lot of mileage out of its English DTS:X audio mix. Dialogue is clean and clear throughout allowing every joke and auditory gag to come through with great clarity - even if they're not always funny. Sound effects are solid giving the mix a lot of surround activity. The big explosion in the grill store is a great highlight where there is plenty of surrounds and vertical activity. Another great moment is when Teddy and his fellow delinquent students try to sneak into the high school to steal the midterm exam. The scene is quiet allowing for the dialogue and small subtle sound effects to fill the big empty hallways making the auditory gags work that much better. The score by David Newman is pretty typical modern comedy stuff, but it does a great job of filling out the mix. Since most of the jokes are dialogue driven - for better or worse - this mix keeps up and does the film justice. 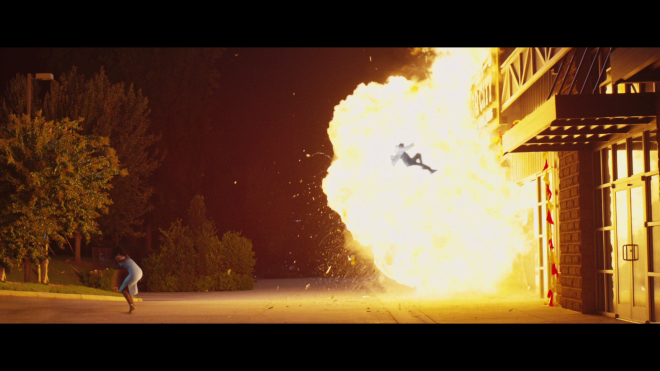 Night School comes packed with a decent assortment of bonus features complete with Director's Audio Commentary and a gag reel material as well as some deleted scenes. Given the amount of unfunny improv comedy, I actually would have rather had these deleted bits included in the film even if it all it would have been was replacement filler. 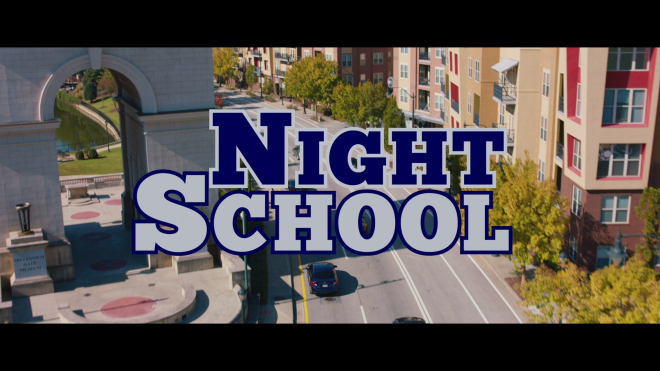 Kevin Hart needs a foil, someone he can work off. Like Abbott needed Costello, Hart is funniest when he's got someone to play off and he's missing that in Night School. When the comedy well runs dry it relies too heavily on unscripted improv shtick that becomes tiresome and stalls out any comedic momentum. There are some good laughs here and there, but not enough to sustain either cut of the film. Universal gives Night School a solid Blu-ray release that's bright, colorful, and well detailed complete with an effective DTS:X mix and some decent bonus features. This one is really for the diehard Kevin Hart fans, for the curious, it's at least Worth A Look.

Sale Price 8.47
List Price 14.98
Buy Now
3rd Party 2.14
In Stock.
See what people are saying about this story or others
See Comments in Forum
Previous Next
Pre-Orders
Tomorrow's latest releases