The House with a Clock in Its Walls

From the imagination of gore-meister Eli Roth, The House with a Clock in Its Walls is a weirdly charming, delightfully spooky surprise with terrifically zany, witty performances by Jack Black and Cate Blanchett. The enchanting fantasy flick casts its charm on Blu-ray with a mesmerizing picture quality, a reference-quality Dolby Atmos presentation and an enjoyable set of supplements. The overall package is Recommended. (We have also reviewed the 4K Ultra HD Blu-ray.)

Arguably, the weirdest thing in a movie that features a creepy Victorian house with living furniture that behaves like pets and a pair of magically-talented, eccentric witches is seeing its director as the central hero of a 1950s children's programming. And if that's not weirdly unexpected enough, said director of The House with a Clock in Its Walls is would-be gore-meister Eli Roth. On the one hand, Roth's very brief cameo of the indomitable Comrade Ivan could be viewed as part of his quirky sense of humor, a little wink-wink nod to his fans watching. But on the other hand, one could psychoanalyze a great deal about a filmmaker better known for his gruesome horror flicks who is now trying his hand at family-friendly fare. More surprising still, Roth appears to have been the right pick for this adaptation of the popular 1973 children's horror mystery novel, carefully balancing some of the plot's spookier, occasionally nightmare-inducing aspects with a delightfully cartoonish charm and humor.

Of course, a good deal of the film's charming zaniness and creepy gaiety comes from the witty banter of Jack Black and Cate Blanchett. Within an instant, the two as Jonathan Barnavelt and Florence Zimmerman cast a spell that's quite enchanting, convincingly squabbling and throwing quippy insults as though they were lifelong friends. Their back and forth is reminiscent of classic 1940s zany romcoms, which makes sense in a story taking place in the 1950s, but interestingly, their affectionate but purely platonic ribbing is also meant to mask darker secrets, one of which is hidden within the walls of the house, as hinted at in the title. As the story progresses, we slowly learn more about the characters, revealing somewhat complicated individuals still traumatized by the events of WWII. And frankly, this mature and surprisingly touching aspect of Eric Kraipke's script elevates the film, as it opens a dialogue on the importance of confronting and dealing with past trauma. 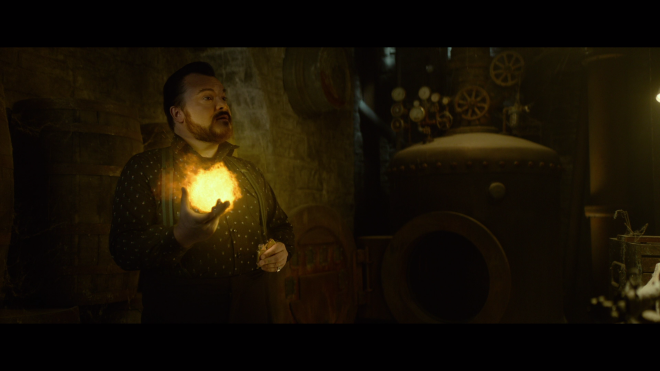 Solving the mystery of a ticking clock echoing throughout the house is not as particularly engaging as Black and Blanchett, though the reason behind its creation is darkly fascinating for a children's movie, I must admit. However, Jonathan's orphaned nephew Lewis (Owen Vaccaro) setting on his own personal hero's journey to uncover the truth is a genuine joy to watch, revealing a clever, shrewd little lad behind a pernicious curiosity. Through him, we discover not only more about the house and this world of learned magic, but he also sets the stage for everyone to cope with the pain of loss. For Lewis, he desperately wants to be loved and makes friends to the point of making decisions with dangerously horrifying consequences — the usual things kids do when trying to impress others, like raising the dead corpse of a dark magician (Kyle MacLachlan). And still, Roth and his team tie it all together to the central theme of how we respond to loss, either negatively or apathetically.

As someone who is not a fan of Eli Roth's previous efforts, I confess to really enjoying The House with a Clock in Its Walls, as his talents for quirky horror serves this production especially well. Although the more serious moments of the story are not handled with the weight they deserve, Roth nonetheless doesn't undercut them either. They may lack the emotional impact the conversations imply, but at least, they don't entirely fall flat either, still succeeding at conveying their importance, which then, affect the subsequent action. His strongest area is definitely in the second half when the tension and suspense begin to grow and his skill at generating a creepy atmosphere really kicks things into gear. With some truly spectacular practical effects and CG wizardry assisting, Roth keeps his audience on the edge as our trio of spellcasters battles a horde of creepy life-size dolls, a mob of evil jack-o'-lanterns or an evil warlock's nefarious plans. It's a delightfully eerie tale for the whole family.

Universal Studios Home Entertainment brings The House with a Clock in Its Walls to Blu-ray as a two-disc combo pack with a code for a Digital Copy. The Region Free, BD50 disc sits comfortably opposite a DVD-9, and both come inside a blue, eco-elite case with a glossy slipcover. After several skippable trailers, viewers are taken to a static menu with music.

The weirdly delightful fantasy flick casts its charming magic on Blu-ray with a mesmerizing and enchanting 1080p/AVC MPEG-4 encode.

From beginning to end, the freshly-minted transfer shows razor-sharp lines in the vintage costuming, hair and surrounding foliage. Every nook and cranny of the elaborate and beautiful architecture of the house is plainly visible, exposing the fine woodwork, grain, and smallest imperfection. Even the CG wizardry of the most imaginative action maintains excellent clarity, and facial complexions are highly-revealing with lifelike textures and healthy flesh tones. However, there is the occasional bit of softness here and there, but overall, it's a fantastic picture with spot-on contrast and crisp, brilliant whites, allowing the magical sorcery to animate the screen. The presentation also boasts exceptional brightness levels, showering the 2.39:1 image with ebony rich blacks and deep, stygian shadows, providing the video with fantastic dimensionality. Rogier Stoffers' colorfully-stylized cinematography is the biggest winner here, flaunting sumptuously rich primaries all around while also parading about in an animated array of secondary hues, especially oranges and purples. (Video Rating: 92/100)

The magic continues to bewitch fans with a topping, reference-quality Dolby Atmos soundtrack that will make the home theater feel as though it were alive, much like the house itself.

The opening scenes are deceptively peaceful and front-heavy, luring listeners in with Nathan Barr's tranquil music, but once we arrive at Uncle Jonathan's place, the room is suddenly teeming with the subtle noises of an old, creepy Victorian house. For the first quarter of the movie, before Lewis learns the truth of the house, the surrounds and overheads are employed with the racket of creaking wood and furniture mysteriously moving all about. As the story progresses with more magic and scares, the entire system erupts into an immersive hemispheric soundfield that places the listener right in the middle of the cosmos, a bevy of flying books, an attack by nightmarish life-size dolls or the inner mechanical workings of a massive doomsday clock.

The front soundstage is continuously wide and highly-engaging as many of those same effects discretely traveling between the three channels and the top heights. Imaging feels expansive with a splendid sense of space, exhibiting crystal-clear clarity within the mid-range, allowing for every high-pitched click, clang, tic, and tock to be perfectly heard all around. An occasionally powerful and terrifically responsive low-end provides palpable weight to the imaginative visuals and music. Amid the magical splendor and delightful horrors, vocals are precise and very well-prioritized, making this object-based track a great deal of fun. (Audio Rating: 96/100)

The strangest and weirdest surprise in The House with a Clock in Its Walls, a movie all about weirdness and the strange, is that it comes from the imagination of gore-meister Eli Roth, a filmmaker better known for horror and gross-out shocks. Adapted from the popular 1973 children's horror mystery novel, the plot's spookier aspects is carefully balanced with a few nightmare-inducing visuals and a delightfully cartoonish charm, aided by the terrifically zany, witty banter of Jack Black and Cate Blanchett. The weirdly delightful fantasy flick casts its charm on Blu-ray with a beautifully mesmerizing video presentation and a highly-satisfying, reference-quality Dolby Atmos soundtrack. With an average but nonetheless enjoyable set of supplements, the overall package is recommended for fantasy fans everywhere.

Sale Price 6.99
List Price 14.98
Buy Now
3rd Party 34.99
In Stock.
See what people are saying about this story or others
See Comments in Forum
Previous Next
Pre-Orders
Tomorrow's latest releases