Dark, devious, and devastating, Julien Duvivier’s Panique stands as one of cinema’s most affecting film noirs. The Georges Simenon story of a mild-mannered loner who stumbles upon a murder and becomes involved with a toxic femme fatale is packed with potent themes, riveting performances, and visual artistry, and features a nail-biting climax that out-Hitchcocks Hitchcock. Terrific video, audio, and supplements distinguish Criterion’s stellar Blu-ray release, which comes very highly recommended.

Film noir may be an American invention, but one of the genre’s finest - and nastiest - specimens comes from France. Panique is a masterwork from director Julien Duvivier that combines dazzling style with devastating substance, but unless you’re a member of the cinema cognoscenti, you might not be familiar with it. Despite its lofty reputation, this searing study of murder, betrayal, and bigotry in a seedy Parisian neighborhood just after the end of World War II doesn’t get much airplay in the U.S., but hopefully Criterion’s stunning Blu-ray release will expose this deeply affecting film to a wider audience.

Based on a novel by famed Belgian writer Georges Simenon, who’s best known for his Jules Maigret detective stories, Panique is a scathing indictment of social injustice wrapped up in a murder mystery. It’s brilliantly constructed, flawlessly executed, and punctuated by inventive imagery and moments of breathless tension. Though trademark noir elements abound, it’s the penetrating themes percolating beneath the narrative that make the movie so memorable...and disturbing.

Monsieur Hire (Michel Simon) is the village outcast, a gruff, fastidious, quirky, introverted soul who struggles to connect with other people. He masks his loneliness with an imperious air, but when he looks across his courtyard one night and espies a beautiful, raven-haired woman in a neighboring apartment, he becomes instantly transfixed and his defenses begin to crumble. That alluring woman is Alice (Viviane Romance), who’s just spent eight months in prison after taking the rap for a robbery her lover Alfred (Paul Bernard) committed.

Alice harbors no ill will - in fact, she revels in her sacrifice - but shortly after her passionate reunion with Alfred, the smitten Monsieur Hire accosts Alice and insinuates Alfred might be involved in the recent murder of a wealthy spinster. The crime has baffled the police, but Monsieur Hire tells Alice he has ”irrefutable” evidence of Alfred’s guilt. Later, when Alfred is alone with Alice, he confesses to the killing, but instead of turning him in, Alice chooses to help Alfred, and together they conspire to make Monsieur Hire the prime suspect by exploiting his burgeoning affection for Alice and fueling the neighborhood’s unfounded disdain of him. Sadly, for Monsieur Hire, his damsel in distress is really a femme fatale.

Panique taps into the lingering feelings of paranoia, suspicion, resentment, and guilt that afflicted Parisians during the German occupation a few years earlier. As the drama crescendos, it’s horrifying to watch how the recently freed French taunt, discriminate against, and ostracize those they deem “different”...behavior eerily reminiscent of their hated Nazi foes. Monsieur Hire is a strong, intelligent man, but Alice is his kryptonite, and as he becomes ever more entangled in her bewitching web, such distasteful elements as gossip, innuendo, and extreme prejudice incite the anger of a hungry mob eager to avenge a vicious murder and pin it on an easy target - the outsider.

Duvivier seamlessly weaves these fabrics together, tossing in some voyeurism and fortune-telling to heighten the sense of eeriness and unease. Panique was the director’s first French film after several years in Hollywood, and though he reportedly loathed the American film industry, it greatly influenced him. Several scenes are creatively filmed and exude a Hitchcockian feel, especially one shot at a bumper car ride at a street carnival. That carnival, which plays a starring role in the movie’s drama, surely must have impressed Hitchcock, who used the setting to fantastic effect five years later in Strangers on a Train. Hitch also ramped up the voyeurism angle eight years later in Rear Window, making one wonder just how taken he must have been with Panique.

Romance plays the femme fatale to perfection. Slyly manipulative one minute, fragile and vulnerable the next, she‘s a fascinating figure and continually keeps us guessing. Simon makes a fine foil, painting a deeply affecting portrait of loneliness, defiance, and despair. Though not especially likable, Monsieur Hire wears the scars of life with quiet dignity and doesn’t deserve the cruelty his community unrelentingly dishes out. Simon beautifully expresses the character’s isolation, and his work in the final horrific scene is quite stirring.

American film noirs are deliciously dark and hard as nails, but often stymied by the rigid, moralistic production code that quashed racy content and diluted controversial themes until the 1960s. Censorship was far less prevalent in Europe (it’s pretty shocking to see Alice and Alfred lounging in bed together after sex - an image you’d never see in an American movie of the period) and the freedom Panique flaunts makes it edgier, grittier, and less predictable than its Hollywood counterparts. Attention noir lovers: This is the real deal. Quite simply, Panique is magnifique. 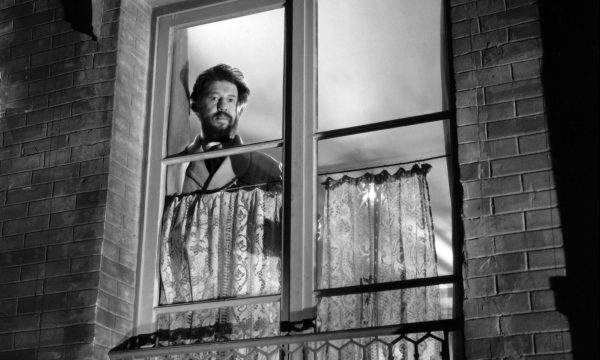 Panique arrives on Blu-ray packaged in a standard Criterion case.  A 16-page fold-out booklet featuring essays by film historians James Quandi and Lenny Borger, a cast and crew listing, and transfer notes (but sadly - and strangely - no photos) is tucked inside the front cover. Video codec is 1080p/AVC MPEG-4 and audio is French LPCM mono. (English subtitles are provided.) Once the disc is inserted into the player, the static menu with music immediately pops up; no previews or promos precede it.

According to the liner notes, this 1080p/AVC MPEG-4 transfer was struck from a 2K restoration of the film created from a 35 mm nitrate fine-grain master. The image looks beautiful, combining lush and gritty textures to accurately reflect the movie’s shifting moods. Grain is evident but never overpowering, and its presence maintains the essential filmic feel. Clarity, contrast, and gray level variance are quite good, blacks are deep and inky, and the harsh look of exterior scenes nicely conveys the town’s cruel, crude atmosphere. Shadow delineation is excellent, depth is evident, and though some close-ups exhibit some softness, they still showcase fine facial features well. Instances of crush are rare, and only a few errant nicks and marks, as well as a stray vertical line at the 68-minute mark, dot the picture. Film noir can often look overly stylized, but this top-notch transfer terrifically melds Panique’s noir and naturalistic elements into a seamless and very pleasing whole.

The French LPCM mono track was “restored from a 35 mm duplicate soundtrack positive, with a 35 mm duplicate soundtrack negative used for sections where the positive was damaged.” The audio is clear and well modulated, and no age-related hiss, pops, or crackle intrude. Effects are crisp, a wide dynamic scale gives the music score plenty of room to breathe, and dialogue is appropriately prioritized. The sound may take a back seat to the visuals, but no glaring defects call undue attention to it.

The Panique disc features fewer extras than most Criterion releases, but they are all high quality supplements.

Panique is a breathtaking and emotionally affecting film noir that combines stunning visuals with important, thought-provoking themes to become a bona fide genre classic. American audiences may not be familiar with Julien Duvivier’s riveting adaptation of the Georges Simenon novel, which is about so much more than a brutal murder and conniving femme fatale, but hopefully Criterion’s Blu-ray release will change that. Excellent video and audio transfers and a collection of high-quality supplements enhance this essential disc, which is a must for film noir fans and comes very highly recommended.

Sale Price 25.2
List Price 39.95
Buy Now
3rd Party 17.8
In Stock.
See what people are saying about this story or others
See Comments in Forum
Previous Next
Pre-Orders
Tomorrow's latest releases