As the latest entry in the series written and directed by Shane Black, The Predator crash lands with a spectacular dud instead of reigniting a fiery enthusiasm for the franchise, a massive misfire that is ultimately sleep-inducing and a chore to sit through. On Blu-ray, the fourth or sixth sequel, depending on what you consider canonical, arrives with shocking demo-worthy HD video and a fantastically immersive, reference-quality DTS-HD MA 7.1 soundtrack. Ultimately, the overall package is A Rental at Best.

Even with the lowest expectations imaginable, The Predator somehow still manages to fall well below that while simultaneously surprising audiences with its degree of badness. Given the talent behind the production, the bigger mystery of this latest installment to the popular sci-fi horror franchise is trying to figure out where the filmmakers went wrong. In terms of pure action fun, the movie delivers the visual goods but significantly lacks the fun or the rippling muscular stamina of the 1987 original classic, looking like the sort of big-budget, edge-of-your-seat feast for the eyes that should be more satisfying. Yet, it all feels empty and mind-numbingly tedious — more likely to make viewers nod off in spite of the ear-piercing pandemonium erupting all around. The third entry to the series — technically, the sixth if we count the two Alien vs. Predator features — may come with a few visual delights, but saying it's about as good the AVP spinoffs is not much of a compliment.

In fact, a case could be made that those aforementioned universe-expanding entries — as much as I personally think them god-awful — are arguably better than this clunker, which crash lands with a spectacular dud instead of reigniting a fiery enthusiasm for the franchise. Coming from a script by Fred Dekker and Shane Black, The Predator never once makes audiences care about the characters. Admittedly, the ragtag platoon of military rejects, which includes Keegan-Michael Key, Thomas Jane and Alfie Allen of Game of Thrones fame, comes with an animated camaraderie that's at least amusing to watch. But the endless, back-and-forth infantile mockery and mom jokes feel more mean-spirited than character developing. Ultimately, it's a rather weak attempt and desperately ham-fisted intimation of Black's Rick Hawkins' raunchy humor. 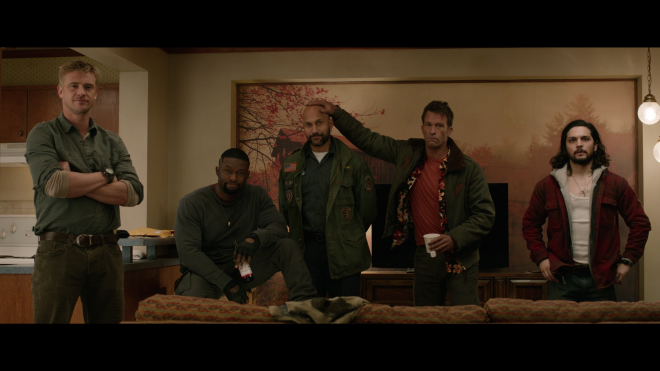 Things only turn for the worse when we realize there is absolutely nothing unique or interesting about these men, who suddenly choose to fight against a completely unknown alien adversary because, you know, reasons. These soldiers are a foul-smelling potpourri of clichés, imagined from a wide selection of archetypes that might as well as be portrayed by life-size cardboard cutouts that would still achieve the same effect. Their reluctant leader is Army Ranger sniper Quinn (Boyd Holbrook), whose wife (Yvonne Strahovski) makes a point of listing her estranged husband's decorated military career during a clumsily tacked-on grandiose speech. He oozes the typical surly, mean, crusty, disgruntled soldier vibe that camouflages a wounded soul whose only care is his son Rory (Jacob Tremblay), which is where the movie simply goes horribly bad. The filmmakers rely heavily on stereotypes to convey the kid possesses natural talents for the fight against the aliens, but everything could have been accomplished just as well without that particular character trait.

Ultimately, The Predator is a complete misfire, and its failure comes down to the script and a lack of empathetic characters. It's loaded with tons of explosive, sometimes eye-catching action, but the plot is nonsensical about two different-sized Predator creatures, evolution, and climate change while neglecting to engage viewers. Black and Dekker (no pun intended) obviously favor an attempt to recapture the spirit of John McTiernan's beloved classic while belaboring audiences with supposed witty allusions. Olivia Munn's evolutionary biologist Dr. Bracket is made to painfully utter the line, "You are one beautiful motherfucker." Later, former Marine officer "Nebraska" Williams (Trevante Rhodes) yells the infamous line "Get to the choppers!" but is actually referring to a pack of Harley Davidsons. Real helicopters transport the baddie Will Traeger (Sterling K. Brown) across various locations to the non-diegetic iconic tune of the original film, guaranteeing either endless eye-rolling or undeserved gleefulness from a few fans. In either case, such forced references are emblematic of the production as a whole, making for a boringly miserable watch.

20th Century Fox Home Entertainment brings The Predator to Blu-ray as a two-disc combo pack with a flyer for a Digital HD Copy. With a glossy cardboard slipcover, the Region Free, BD50 disc sits comfortably opposite a DVD-9 copy inside a blue, eco-cutout case. After skipping a few trailers at startup, viewers are taken to a menu screen with full-motion clips and music playing in the background.

The platoon of zany misfits launches a counterattack on Blu-ray equipped with a freakishly awesome and demo-worthy 1080p/AVC MPEG-4 encode. The freshly-minted transfer continuously shows razor-sharp details, from the stitching in the clothing to every nook and cranny of the RV and various other interior shots. The netting-like outfits of the predator creatures are distinct, and we can plainly make out every black spot and wrinkle of their sweaty body. A majority of the movie takes place at night, awash in dark, ebony shadows that penetrate deep into the screen without sacrificing the smallest detail to the murkiest corner. Inky rich blacks provide the 2.35:1 image with a three-dimensional quality while showing distinct differences in the costumes, and facial complexions appear natural with excellent, lifelike textures in the cast as well as the alien monsters.

The video presentation also appears true to Larry Fong's interestingly stylized photography, showing a somewhat restrained and limited palette. Nevertheless, the orange-teal cinematography displays sumptuous primaries with reds and blues, in particular, looking full-bodied and vibrant. Meanwhile, secondary hues, like the oranges, cyans and purples of the alien technology, glow with a neon-like brilliance and an animated zest. Contrast is well-balanced and comfortably bright with crisp, dazzling whites that make explosions pop with intensity while the highlights around various light fixtures and the metallic surfaces of the predators' gear glisten and sparkle against the darker backgrounds. (Video Rating: 96/100)

The sci-fi sequel also crash-lands to home theaters with a phenomenal, reference-quality DTS-HD Master Audio 7.1 soundtrack. Dynamic range is astoundingly extensive and broad, exhibiting the smallest detail with superb, crystal-clear clarity. Every zing, voomp, and sizzle of the alien weapons are distinct with incredible fidelity and precision, as the noise reverberates across the entire front soundstage and hits its target in the back of the room. Action sequences maintain outstanding accuracy and cleanliness within the upper ranges, giving each predator's signature roar a sharply different feel and every explosion an extraordinary intelligibility. All the while, dialogue remains lucid and well-prioritized amid all the pandemonium, allowing us to better make out the unfunny dialogue and one-liners.

More impressive is how the design overwhelms and fills the room with a variety of sounds, as the rears are continually employed with subtle ambient effects that play almost non-stop throughout the film's runtime, creating a wonderfully satisfying environment. Almost immediately, the lossless mix establishes a stunning 360° soundfield that's immersive with bullets whizzing in all directions and debris raining down everywhere. Even more surprising is the seemingly unceasing noise of the local wildlife, especially the chirping of birds in the distance during the last quarter of the movie, enveloping the entire listening area. Panning is fluid and flawless, creating while Henry Jackman's music surrounds viewers with excitement, making this a highly-satisfying soundtrack owners will want to use for showing off their system. (7.1 Audio Rating: 96/100)

From a script by Fred Dekker and Shane Black, the latter of whom also directs, The Predator manages to fall well below the lowest of expectations while simultaneously surprising with its degree of badness given the talent behind the production. Despite featuring the sort of action-packed visuals that should thrill and excite, the spectacle of alien pandemonium is all for naught and ultimately sleep inducing thanks to a lack of emphatic characters and a conflict that makes little sense. The whole cockamamie mess crash lands on Blu-ray with an outstanding, reference-quality audio and video presentation that should satisfy the few fans out there. Sadly, a lackluster set of supplements makes the overall package a rental at best for those willing to a chance on this massive misfire.

Sale Price 17.99
Buy Now
3rd Party 4.43
In Stock.
See what people are saying about this story or others
See Comments in Forum
Previous Next
Pre-Orders
Tomorrow's latest releases