Witness where the ever-expanding Conjuring universe started with Corin Hardy's The Nun! A prequel to all of the prequels, a detective priest with faith issues and a nun-in-training travel deep into Romania to investigate an ancient abbey and the evil that lurks within. Over-reliant on jump scares, a solid first half is squandered in the home stretch by misplaced comedy relief and a rote and routine demonic ending shows that these battles with devils and demons may be running out of steam - even if they're still wildly entertaining. Warner Bros. exorcises The Nun on Blu-ray with an impressive transfer that highlights the spooky locations and the deep black levels. Packed with a thrilling and jump-inducing Atmos mix, The Nun is a fun rollercoaster ride - even if the movie itself isn't the best thing ever made. Worth A Look.

"I'm afraid there is something very wrong with this place."

Before The Conjuring, before a demon-girl infected a little doll in Annabelle: Creation, there was The Nun - the Mother Superior of all Conjuring films. Only it's unfortunately not a great movie. Entertaining? Sure. Good? I wouldn't say that. We pick this story up at a secluded secretive cloistered abbey in Romania in the 1950s where a nun was discovered hanging from a noose by local French-Canadian handyman Frenchie (Jonas Bloquet). Intent on discovering if this abbey is cursed, the Vatican has sent faith-stressed investigator Father Burke (Demián Bichir) along with nun-in-training Sister Irene (Taissa Farmiga) to investigate. Evil lurks in the darkness as Father Burke, Sister Irene, and their pal Frenchie soon learn of a terrible secret the convent of nuns had kept hidden for hundreds of years. 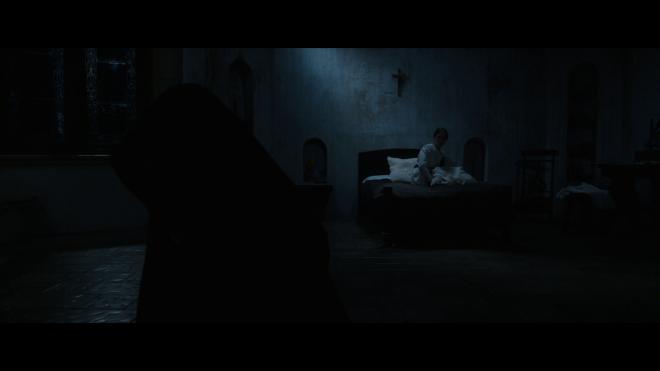 Without putting too blunt a sign on it, the plot of The Nun essentially is Exorcist: The Beginning / Dominion: Prequel to The Exorcist. When I saw this in the theater it was pretty clear within the first few minutes that The Nun was following the same playbook of a faith-questioned priest who travels to a church the Vatican knew little or nothing about and must battle an ancient demon - that actually won't be stopped because this is a prequel, and the whole exorcise is a bit redundant. But I was fine with that. It's what I paid my money for because I just wanted to watch a creepy movie. Surprisingly enough, The Nun works - up to a point.

The first 45-minutes of The Nun is actually pretty solid stuff. Certainly, not the greatest thing ever made, but it was working. There was a creepy location with ominous dark and shadowy photography to set the mood. The characters were introduced in albeit brief but efficient way with fine performances by Bichir and little Farmiga keeping the family name involved while her sister Vera preps for the upcoming Annabelle 3. Top it off, there were some great scares in there while the film actually took time to set itself up. Unfortunately - that last 45-minutes kills it.

I do enjoy jump scares - they're effective because you don't expect them and they almost always get the audience going - but it quickly becomes the only gag in the game. They become obvious and tiresome after a stretch. The film also moves away from some great practical gore and monster effects towards a parade of clunky CGI spectacle that just doesn't line up with what we saw at the outset - let alone in the previous Conjuring movies. Then the film finds a silly need to explain itself courtesy of a flashback sequence right out of a History Channel special complete with an ancient relic and Templar Knights. But those issues aren't this film's worst sins. It's the sad attempt at horror-comedy courtesy of our pal Frenchie that damns the film's last half.

I don't mind comedy in my horror movies - especially rollercoaster ride flicks like these. You need that smartly timed release after a good scare - but this? This, this is no good. All of a sudden every scare is given a quip or a joke from Frenchie and any tension or sense of danger is ruined anytime Burke or Irene shouts "Frenchie!" looking for help. And it isn't Jona Bloquet's fault either, he's playing the part with gumption and gusto trying to make the most of it. He's great in the first half as a guy who's just trying to help that is clearly in way over his head. His fight with a demon nun in the graveyard was creepy as hell and proved to be the perfect exit for the character. Then he comes back with a torch and a shotgun and his character effectively becomes the Jar Jar Binks of The Conjuring franchise.

To be honest, I'm past the point of really expecting too much from The Conjuring movies as a whole. Any genuine scares have played so each successive sequel or prequel is more or less a greatest hits rundown of old scares. But in truth, these movies are still fun. The Nun isn't a great movie by any stretch. Like the later Exorcist entries, they're not good movies but they're entertaining. They're a fun way to pass the time. To give The Nun some measure of credit, I don't think it's the worst film in the series, that would still be Annabelle for me. If only the last half of the film could have been as good as the front end this would have been an above average creeper flick.

The Nun haunts Blu-ray courtesy of Warner Bros. in a two-disc Blu-ray + DVD + Digital release. The discs are housed in a standard eco-friendly case with identical slipcover artwork. The disc loads to trailers for upcoming WB releases before arriving at a static-image main menu with traditional navigation options. The included digital code is Movies Anywhere compatible. 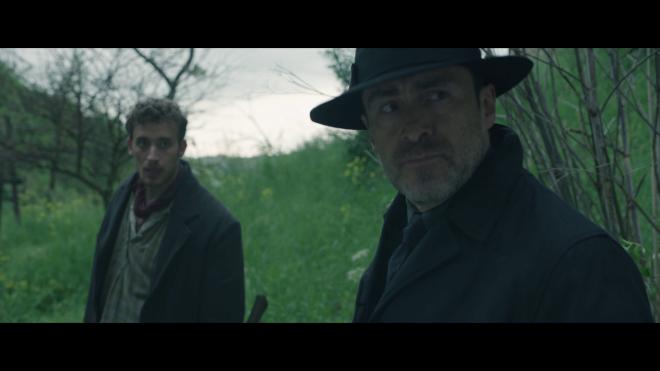 Like the rest of the Conjuring films to date - The Nun is a dark and gloomy affair - that looks great on Blu-ray! Sporting a 1080p 2.40:1 transfer, the image is heavy on gloom, deep inky black levels, and lots of shadows with plenty of sharp details and splashes of color where it counts. While the 4K UHD release does a better job handling the image load, this 1080p is no slouch so if you haven't made the leap you're not being completely left behind.

The opening act of the film is very bright, with plenty of rich primaries with beautiful natural daylight that allows you to see and appreciate all of the fine facial features, period costuming, and the on-location production details in Romania. Once the main movie gets going and our Priest and Nun walk into the abbey (sounds like the setup for a joke) the shadows creep in and dominate without killing primaries, detail, or being so dark that whites aren't crisp. There are a couple soft spots here and there, and some CGI elements look a tad weightless and out of place but overall this is a very good clean digitally-sourced transfer that shows 1080p Blu-ray has a lot of life left in it. 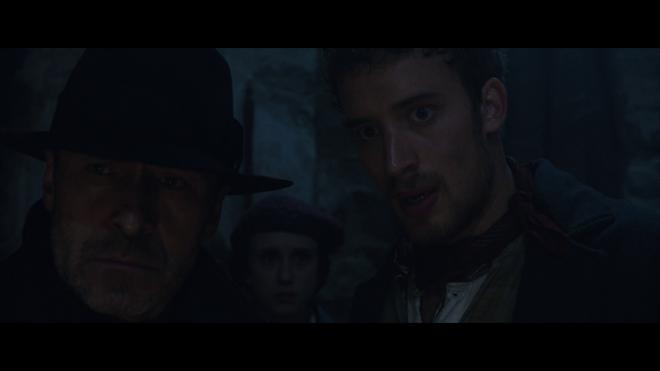 In keeping with the recent entries of the franchise, The Nun sports a particularly spooky and effective Dolby Atmos audio mix. For a flick with this many bumps, creeks, rustling winds, and jump scares - it gets quite the workout! One of the things I've loved about this franchise is how well they play with silence. They let those precious few moments of dread and suspense creepy into the scene with a few bits of atmospherics like wind or rustling leaves or a creaking floorboard. This mix keeps to those strengths.

Dialogue is clean and clear throughout - which for the number of times "Frenchie" is shouted may be a bad thing for some? But in all seriousness the element spacing and resonance for this mix is wonderful. You could have creepy low sounds in one corner, hushed whispering voices in the center, some wind or other sound punching the vertical activity, and then cap the mixture off with Abel Korzeniowski's moody score. The mix also does a great job of managing the jump scares which can go from near dead silent to instantly rocking your entire setup without suffering any distortion. LFE activity is great making sure those eery dissonant tones are always present. Even when the movie is at its silliest, it sounds great. The only issue is Atmos is not the default track and you do have to go to the Audio menu and select it, but that's par for the course with Warner Bros. these days. 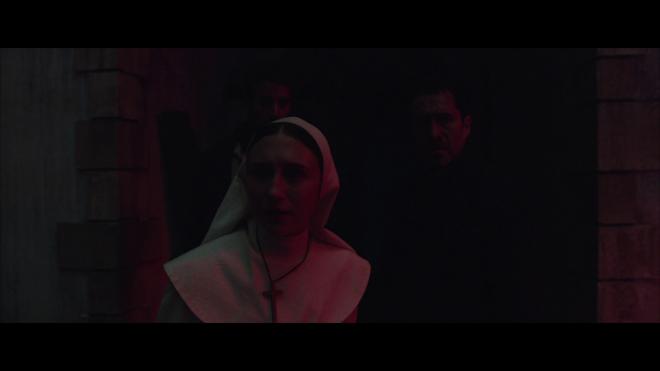 Bonus features aren't the most impressive lot for The Nun. The thing most folks are going to be interested in are those precious 12-minutes of deleted scenes. Aside from one effective bit, there aren't any more scares or jumps. Everything else is character development material that I can only guess was cut for time - but I wish they were kept in. You learn a lot more about the characters - especially Father Burke and his backstory. The rest of the bonus features are the tried and true EPK filler that doesn't show a lot of behind the scenes material. 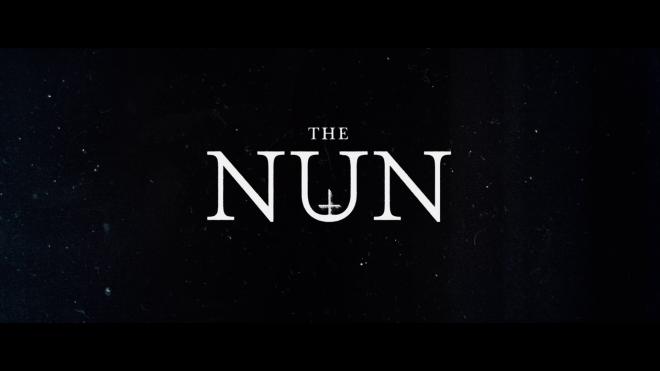 The Nun isn't the best of this Conjuring universe. If I had to rank them it'd come in at fourth just ahead of the original Annabelle film. Just because it isn't a great movie doesn't mean that it isn't entertaining. Despite some notable faults, I've had fun with this one on multiple occasions now. The franchise is far from dead but it does need a little more TLC if it wants to keep running at the pace Warner Bros. is pushing them out.

WB delivers a solid Blu-ray release that shows the format has a lot of life in it as folks focus on 4K and beyond. The image is solid work and the Atmos audio mix is a beast. Bonus features are slim, but the deleted material shows that a slightly smarter movie was once possible. At this point, you're a fan of this Conjuring universe and this is a worthy entry. But if you haven't been scared or charmed by previous entries let alone this parade of prequels, The Nun won't be changing opinions. Worth A Look.

Sale Price 9.99
List Price 14.97
Buy Now
3rd Party 8
In Stock.
See what people are saying about this story or others
See Comments in Forum
Previous Next
Pre-Orders
Tomorrow's latest releases