This remastered version of the classic screwball comedy improves upon the 2011 Blu-ray release, but alas, it’s still far from perfect. Inherent video and audio issues keep Nothing Sacred from maximizing its technical potential, but the cynical tale of media manipulation and celebrity worship still has plenty of bite and possibly even more relevance than it did upon its premiere in 1937. Who knew a silly movie about fake news made 80 years ago could be so prescient?

The concept of 15 minutes of fame didn't begin with the O.J. Simpson trial (remember Kato Kaelin?) or reality TV. As long as there's been media and a public eager to worship celebrities, there have been opportunists looking to seize the spotlight, bask in adoration, and revel in the perks of notoriety. The press fuels and feeds the fire, exploiting its willing subjects to a fare-thee-well, all in the name of increased circulation and profits. It's a codependent, love-hate relationship, and few movies explore it with more bite than Nothing Sacred. William Wellman's classic film is more than 80 years old, but its themes are as relevant and true today as they were back in 1937. Maybe even more so.

At the time of its release and for many years afterward, Nothing Sacred was not only regarded as a searing attack on our society's preoccupation with celebrity and insatiable hunger for scandal, but also a supremely funny screwball comedy filled with daffy characters, clever repartee, and slapstick situations. The laugh quotient, for whatever reason, has waned over the past few decades, but the message remains potent. In fact, if ever a motion picture put its finger on one of America's raw nerves, it's Nothing Sacred.

Wally Cook (Fredric March) was once the ace reporter for the New York Morning Star, but after his plan to pass off a shoeshiner as a sultan is exposed as a hoax, he's demoted to the obituary desk. In a last-ditch effort to return to the limelight, he convinces his editor, Oliver Stone (Walter Connolly) - yes, Oliver Stone! - to let him pursue (exploit?) the tragic story of Hazel Flagg (Carole Lombard), a young woman from Warsaw, Vermont afflicted with terminal radium poisoning (yes, terminal radium poisoning!). Wally wants to bring the girl to New York, spread her sad, sad story across the paper's front pages, and ride the tidal wave of sympathy back to the apex of the business. And his editor is only too willing to endorse the scheme.

Unbeknownst to Wally, however, Hazel discovers right before his arrival that she's been misdiagnosed by her doctor (Charles Winninger). The news is bittersweet. Hazel is happy she’s healthy, but because she’s never traveled beyond Warsaw's bucolic meadows, she still deeply desires a trip to the Big Apple. So just as Wally uses Hazel as a comeback vehicle, she sees him as her ticket out of town. And when she arrives in New York along with her doctor (who helps her perpetuate the masquerade - how's that for ethics?), she takes the city by storm, becoming a tragic figure of epic proportions. How’s that for fake news?

Even the jaded Wally gets sucked into the hype, as pity turns to love. Yet after an initial honeymoon period, New York's dying darling soon succumbs to celebrity fatigue, unable to handle the demands of the public, lack of privacy, and constant risk of exposure. Hazel wants out, but quickly discovers getting out of a jam isn't nearly as easy - or as fun - as getting into one.

The cynical edge of Ben Hecht's screenplay remains its greatest asset. Almost every character has an agenda, no matter how good-hearted they seem on the surface, and they don't hesitate to use others to achieve their goals. And when and if they're found out, they don't care who they've hurt or hoodwinked as long as they got what they set out to achieve. It's not a pretty portrait of humanity, but it's a true one, and Hecht paints it with relish. The humor, however, now feels dated and forced; even the famous scene where March and Lombard take swings at each other has lost its comic zing. The script still provokes some chuckles, but doesn't produce the belly laughs it surely inspired decades ago.

Lombard was one of the most gifted comic actresses ever to grace the screen, and her portrayal of Hazel, along with her madcap turn as Irene Bullock in My Man Godfrey the previous year, stands as her most noteworthy work. Her vivacity, impeccable timing, and affinity for the ridiculous - not to mention her palpable beauty - make Lombard both a riveting presence and approachable personality, and her death in a plane crash a mere five years later at the tender age of 33 remains one of Hollywood's most devastating tragedies. (Her husband at the time, Clark Gable, reportedly never got over it.) Hazel may be naive, but she's not stupid, and Lombard nails the dichotomy, playing her with a wonderful mix of innocence and calculation, so it's difficult to gauge her level of sincerity at any given moment. Yet despite her duplicity, Lombard makes Hazel so adorable we continually root for her to escape retribution.

The Oscar-winning March (who won Best Actor awards for the original Dr. Jekyll and Mr. Hyde and classic post-war drama The Best Years of Our Lives) only performed in a handful of comedies during his long career, so it's a treat to see him kick up his heels here. His deadpan performance is surprisingly funny, and he and Lombard enjoy a comfortable chemistry that makes their peculiar romance believable. A top-flight supporting cast, led by the always hilarious Connolly and featuring bits by a pre-Wicked Witch of the West Margaret Hamilton, a pre-Mammy Hattie McDaniel (blink and you'll miss her), famed poison pen gossip columnist Hedda Hopper, and a pre-Sheridan Whiteside Monty Woolley (who's little more than an extra and doesn't speak a single line), also enliven the proceedings.

At 74 minutes, Nothing Sacred breezes by, but it's got some meat on its bones, and its substance far outweighs its gags. As an indictment of America's shallow nature, gullibility, and the media's willingness to manipulate and exploit for monetary gain, as well as a send-up of small-town bigotry, Wellman's film hits the bulls-eye. And in this tabloid age of alternative facts, toxic tweets, crazy memes, and biased cable news, it remains an accurate portrait of the celebrity circus that continues to rule our culture. In our current world, nothing indeed is sacred, and this classic satire proves maybe it was always that way. 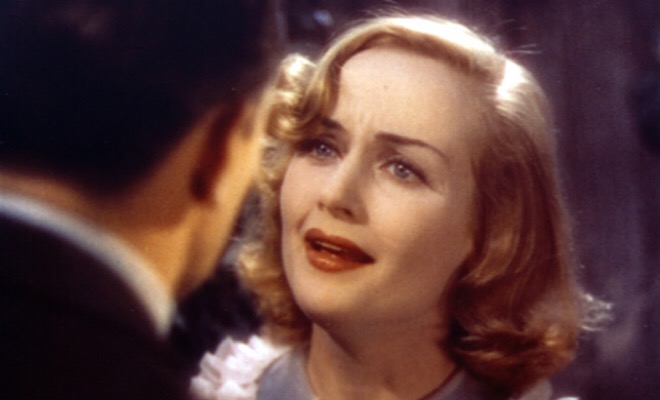 The remastered version of Nothing Sacred arrives on Blu-ray packaged in a standard case. Video codec is 1080p/AVC MPEG-4 and audio is DTS-HD Master Audio 1.0. Once the disc is inserted into the player, the static menu with music immediately pops up; no previews or promos precede it.

A lot of issues plagued the 2011 Blu-ray edition of Nothing Sacred, despite the fact that the transfer was struck from a 35mm Technicolor nitrate print preserved by the George Eastman House Motion Picture Department. This new release is taken from a different source (a restored fine grain master) and scanned in 2K, and the results are often quite striking. At isolated moments, the transfer looks almost perfect, with terrific clarity and contrast, vibrant color, and beautifully integrated grain combining to produce a superior picture. Yet wild fluctuations in all those categories can severely compromise the viewing experience seconds later. Mid-range shots and close-ups look the best, while long shots, transitions, and solid backgrounds often appear fuzzy and noisy (though some are sharp enough to clearly expose the faces of the doubles standing in for Lombard and March). Hues overall tend to shift, fading one moment and brightening the next in a kind of rhythmic undulation, which unfortunately dulls the wow factor that defined early three-strip Technicolor. On the plus side, much of the print damage and missing frames that afflicted the previous transfer are gone, although some marks and hiccups still remain.

So, if you’re a Nothing Sacred aficionado and own the 2011 Blu-ray, is this new transfer worth an upgrade? I say absolutely, but you still need to keep your expectations in check and recognize the limitations that will certainly affect any home video release of the film until it receives the frame-by-frame restoration it so richly deserves.

Kino has improved the sound quality of Nothing Sacred with this release, but inherent issues with the original audio keep this DTS-HD Master Audio 2.0 mono track mired in mediocrity. The age-related hiss, pops, and crackle that afflicted the 2011 Blu-ray have been scrubbed away, but the audio still sounds flat and lifeless. All the dialogue is clear and comprehensible, but a lack of fidelity and limited dynamic range lend the music score a harsh, slightly distorted tone. Audio is definitely not this movie’s strong suit, so it’s a fair bet this is about the best we can expect for a home video release.

This release improves upon Kino’s previous edition of Nothing Sacred in the extras department. In addition to the film’s original theatrical trailer and a few previews for other Kino Studio Classics Blu-ray releases, we get an audio commentary from the director’s son, William Wellman, Jr. While Wellman supplies many bios of cast and crew members and shares some anecdotes about his father and others, the commentary never addresses the film’s themes or how it relates to American society then and now, and from that angle it is very disappointing. We do hear about Wellman’s attempts to limit producer David O. Selznick’s notorious meddling, his fondness for Lombard, his stormy friendship with stunt pilot Paul Mantz, the numerous practical jokes Lombard and Wellman played on each other during production, and how character actor George Chandler, who appeared in 22 Wellman films, was regarded by the director as his lucky charm. Substance, though, is slim, and several gaps litter the track, which is surprising for a movie with such a short running time. Wellman’s perspective is valuable from a personal standpoint, but it’s too bad he wasn’t paired with a film historian who could analyze the themes and social context of Nothing Sacred and fill in some of the dead air.

Nothing Sacred may not be as funny as it once was, but it's still oh so relevant. As long as there's media scrambling for a story and a society that exalts celebrity, there will be self-centered subjects all too eager to manipulate the system. William Wellman's screwball farce takes the bull by the horns and depicts the crazy circus with a surprising acuity that seem sharper today than it did 80 years ago. Kino’s remastered Blu-ray release improves upon the 2011 edition, but the video and audio transfers remain a mixed bag. If you don’t expect perfection, you’ll be quite satisfied with this high-def presentation, which looks and sounds better than any previous home video release. Recommended.

Sale Price 13.36
List Price 29.95
Buy Now
3rd Party 20.21
In Stock.
See what people are saying about this story or others
See Comments in Forum
Previous Next
Pre-Orders
Tomorrow's latest releases