Mile 22 - the fourth collaboration between Mark Wahlberg and Peter Berg - appears to be the perfect action adventure foil for the collaborative talents. Unfortunately, Mile 22 is an arduous silly slog with bizarrely incomprehensible plotting with twists right out of Scooby-Doo complete with nonsensical editing and hyper-busy cinematography. Intended as the first of a trilogy, the film is too busy to develop decent characters that you would actually want to commit that amount of time. While the film isn't all that, Universal Studios gives Mile 22 a technically excellent Blu-ray release with a terrific image transfer and a solid audio mix to match. It's Worth A Look if you're game for some brutal nonsense action - just don't expect anything from it.

Mark Wahlberg is James Silva, a member of the elite Overwatch - a CIA special ops splinter group tasked with handling sensitive strikes and extractions. When Indonesian police officer and Overwatch asset Li Noor (Iko Uwais) turns himself into the U.S. Embassy, Overwatch lead Bishop AKA "Mother" (John Malkovich) tasks Silva and his team members Alice (Lauren Cohan) and Sam Snow (Ronda Rousey) to move Li Noor 22 miles to a safe airstrip for extraction. Within moments after leaving the U.S. Embassy, Silva and the rest of his team are ambushed and set upon by an army of operatives who want Noor dead. If that wasn't bad enough, Silva will have to navigate a maze of internal betrayals and revelations about past operations that are somehow tied to their current operation. 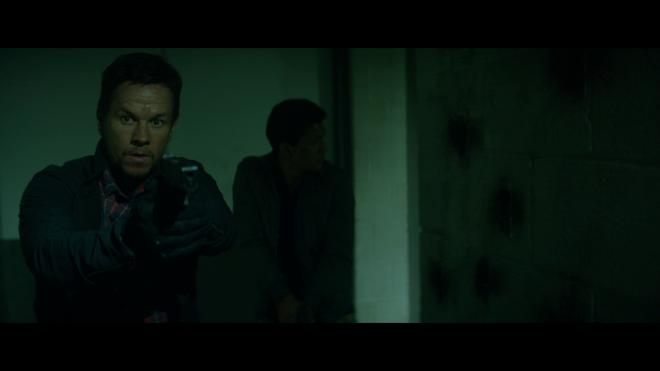 Normally I wouldn't fault a movie for being ambitious with lofty goals for a trilogy. It feels like virtually every movie these days is being designed for the franchise long haul. So I can't blame director Peter Berg and star Mark Wahlberg for having longterm dreams with their pseudo-spy actioner. Unfortunately for Team Wahl-Berg - it doesn't feel like either Mark or Peter spent too much time crafting a well thought out story let alone intricate and interesting characters before getting this film in front of cameras. Had this first film been something closer to Lone Survivor meets Patriots Day, Mile 22 certainly could have been the foundation for a series of movies about a shadow CIA operation that can cause an incredible amount of vehicular mayhem and wholesale destruction without consequence. Instead, this limp and chaotic mess stalls any franchise hopes before they get a chance to start the engine. But on the plus side of things, the violence is packed with brutality with tons of fisticuffs, broken bones, and gaping wounds to suit any gore hound. Even if the movie doesn't make sense, I have to tip my hat to the brutal and bloody action sequences - they're impressive!

From the opening prolog operation to the laughably bad twist to the silly final moment, it's difficult to peg exactly where Mile 22 went off the rails. Without stopping the production and doing a page one rewrite, the film is a problematic mess from the get-go. After Deep Water Horizon and Patriots Day, I felt like Team Wahl-Berg were on a bit of a hot streak and a go for broke action flick would do the pair well - sadly Mile 22 doesn't get the job done. It's chaotically shot without giving the audience much of a clue as to what the hell they're looking at and then the hyper-cut editing is dizzying and irritating when it should be trying to make sense of what's going on. From the writing to the photography to the editing - this is a mess that should have been cleaned up within the first weeks of dailies when there was still time to course correct during production.

If this hadn't been a Team Wahl-Berg movie, if I didn't thoroughly enjoy their last three outings together, I wouldn't be nearly as disappointed. In someone else's hands, Mile 22 would have been just another haphazard action film with a big name star cashing in another huge payday. As it stands Mile 22 is a massive missed opportunity on virtually every front. I heard the bad reviews going into this, I knew it wasn't something great so my expectations were already pretty low, but I went in for 90 minutes of mindless entertainment. As the film closes with a sad setup for a second film, Mile 22 didn't even meet the low bar for me.

Universal Studios dashes Mile 22 off to Blu-ray in a two-disc Blu-ray + DVD + Digital set. The discs are housed in a standard sturdy Blu-ray case with identical slipcover artwork. The disc loads to trailers for other Universal releases before arriving at a static image main menu with traditional navigation options. The included digital copy appears to only redeem through iTunes. 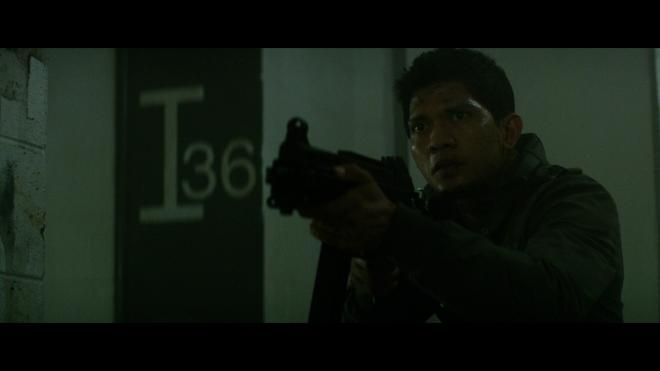 Digging through the technical specs on IMDB, it appears that Mile 22 was something of a technical undertaking. Shot digitally at 8K and finished on a 4K DI, the film is sharp, pristine, and exudes fine details of a modern big-budget spectacle event film. I'm not at all surprised that the film wasn't dropped onto 4K UHD Blu-ray - or at least yet - but I can understand why it wasn't given the critical and box office thrashing it took. That said, even if the movie is practically unwatchable, it'd be interesting to see at 2160p with HDR.

As it stands, this 1080p 2.40:1 Blu-ray image certainly is beautiful! From little beads of sweat to tiny chunks of grit in actor's skin after explosions to the intricate wound makeup, there is a lot of imagery to soak up. Colors are on point with strong primaries and healthy skin tones. Black levels are deep and inky with only a couple odd scenes that honestly look like last-second pickup shots in front of greenscreen backgrounds where blacks falter just a bit. All around this is a transfer to be proud of - if only it had been applied to a better movie! 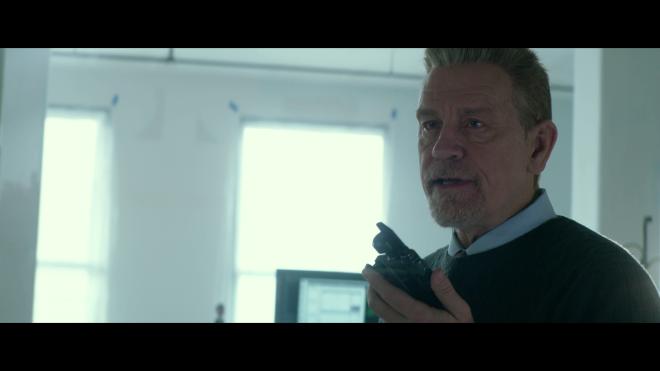 Forgoing Universal's traditional leanings toward object-based audio, Mile 22 squeaks by with an aggressive and impressive DTS-HD MA 7.1 audio track. It may not be as nuanced as Atmos or DTS:X, but it holds its own during the film's many gunfights and explosive set pieces. Dialogue is crystal clear throughout - even during the heaviest of action sequences, the mix holds tight and keeps key elements in place. There is plenty of near-constant surround activity with lots of imaging and channel movement while the front/center keeps the mix grounded. The score by Jeff Russo is the typical action material designed to keep the heart rate up and thumping and it works to punch in the low tones where necessary. My only true gripe is it feels as if the bass and low LFE tones are a tad off in places. While they don't sound hollow or tinny, some fo the big explosions I thought that would normally feel a bit more impactful felt pulled back and restrained. Which is a weird complaint when roaring car engines and blasts of gunfire sound terrific. It's a small gripe really, but one that does stick out from an otherwise perfect show. All around there's very little to complain about with this audio mix and it should give your audio setup a solid little workout. 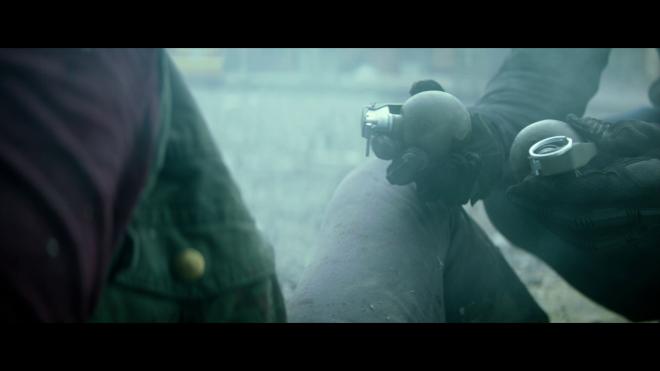 Unsurprisingly, the bonus features package for Mile 22 is little better than the promotional EPK snippets you would see during the pre-movie show at a theater. There's ultimately not a lot here of substance beyond the talking head "I'm really excited to be a part of this movie" dry material. 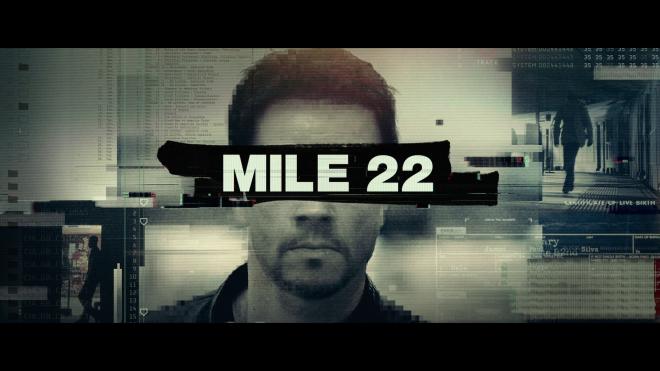 Mile 22 is a few yards short of being a genuinely decent movie. I don't blame it for having lofty ambitions and wanting to be more than a one-off action feature, but if you want to have a big franchise, you need to have an intriguing story leg worth standing on. To his credit, Mark Wahlberg has never really been one for franchises even with two Transformers flicks under his belt. He should keep it that way. Team Wahl-Berg had their first true misfire after three great flicks. I hope they've got another everyman "based on a true story" feature in the works because that is what they're best at. Mile 22 is completely forgettable. Despite the movie's shortcomings, Universal Studios manages to deliver a technically near-perfect disc with a beautiful transfer and a rock solid audio mix. Bonus features aren't anything of consequence. I had friends who really enjoyed this movie for its brutal violence and action, but it wasn't enough for me. If you want mindless gory violence, Mile 22 is at least Worth A Look, but don't expect much from it.

Sale Price 8.89
Buy Now
3rd Party 2.92
In Stock.
See what people are saying about this story or others
See Comments in Forum
Previous Next
Pre-Orders
Tomorrow's latest releases