40 years is a hell of a long time for any movie to not only be a hit but stay relevant - especially a comedy. Carl Reiner's classic The Jerk, starring Steve Martin in his dopiest prime, celebrates its 40th anniversary and the film hasn't lost a laugh in all that time. What better way to celebrate than with a truly Special Edition? After some lackluster releases on HD-DVD and Blu-ray - Shout Select rights a huge wrong by giving this hilarious flick its due High Definition respect with a crisp new transfer and some worthwhile new bonus features. You can turn that old disc into a coaster, this Shout Select release of The Jerk is Highly Recommended.

"The ashtray, the paddle game, and the remote control, and that's all I need… and these matches…"

As I like to pull quotes from a film I'm about to review so you get a sense of tone or what to expect, I found I was completely stuck trying to find the perfect quote for Carl Reiner and Steve Martin's The Jerk. It was tough limiting myself to just the above sentence - I wanted to write the entire scene, but there's no way my little quotation could do that scene the due respect it deserves. You just have to see Steve Martin do it, pause it, recover from laughing so hard that your stomach hurts, and hope you have the stamina to keep going the rest of the way. I am actually shocked that The Jerk is on its way to celebrating its 40th Anniversary! This movie is barely older than I am! 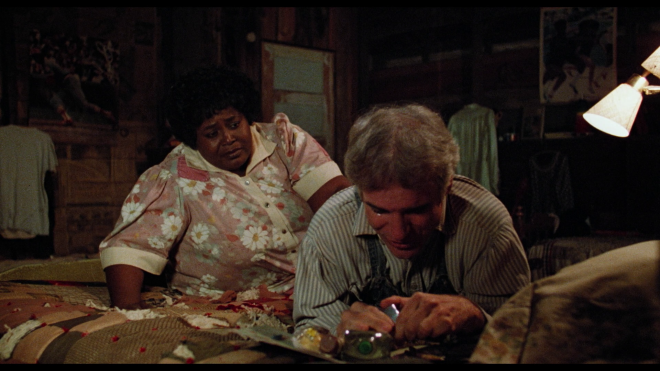 I grew up watching this movie - but never in single viewings. It was a staple of T.V. broadcasts when I was a kid so it always felt like it was on. As soon as my weekend horror movie double feature was done, it was either The Jerk or a John Hughes movie that would immediately follow. I was a teenager by the time I actually stopped to watch the film from beginning to end. I knew all of the scenes, I knew all of the gags, and to this day for the countless times I've seen this film - it's always funny. Sure, there are a couple dead gags that don't go anywhere, but that's true for most comedies. 90% of the time The Jerk is true bellyaching laughter of the best sort.

As I've gotten older, I enjoy the ironic coincidence that The Jerk and Being There were released within just a couple short months of each other. Two vastly different movies with fairly similar plots about intelligence-impaired individuals on a grand life journey. They're heartwarming comedies with decidedly different tones. Hal Ashby went for the heartstrings as Peter Sellers delivered one of his best comedically dramatic performances while Carl Reiner wasn't having any of that genuinely human stuff letting Martin revel in the goofiness. The Jerk is pure absurdity unleashed thanks to the pitch-perfect dope-headed performance from Steve Martin and the efficient well-timed comedy writing of Martin, Carl Gottlieb, and Michael Elias.

I normally like to talk a bit of plot, what worked or what didn't - but I can't with The Jerk. Supposing it is possible that you haven't seen this film, I don't want to spoil a single scene. I don't even want to tell you the plot setup (such as it is) because I feel like I would be spoiling the first big laugh of the movie. Featuring stellar straight and comedic performances from Bernadette Peters, Mabel King, Richard Ward, Bill Macy, and M. Emmet Walsh - Steve Martin never runs out of people to work off in one of his best comedic performances of his career. When you're done with The Jerk, plug in Steve Martin and Carl Reiner's hilarious Film Noir tribute Dead Men Don't Wear Plaid - two very different but hilarious movies make for the perfect double feature!

The Jerk finally leaves home for a fitting Blu-ray release courtesy of Shout Select in a single disc 40th Anniversary Special Edition release with the spine number 54. Pressed onto a Region A BD-50 disc, the disc is housed in a standard sturdy Blu-ray case with identical slipcover artwork. The case has reversible artwork displaying the original poster art. 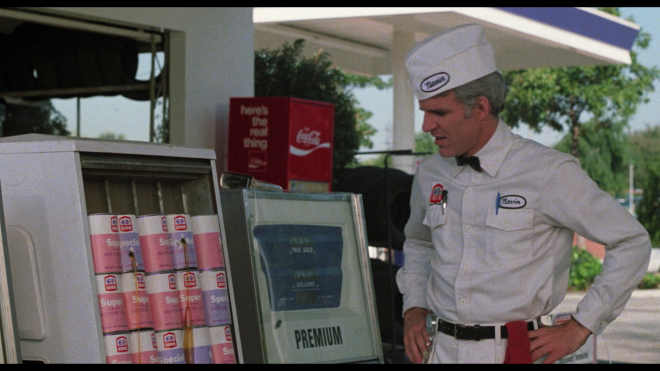 Good news fellow fans of The Jerk, this new 2K scan offers a marked improvement over the previous lackluster release that was sourced from the same problematic transfer as the ancient HD-DVD disc. I don't know if this scan was of the original camera negative or an interpositive - it doesn't really matter in this case - you can effectively turn your old disc into a coaster or let your dog destroy it during a lively game of frisbee!

I no longer have the previous Blu-ray (got rid of it pretty quick) so I'm working against memory, but the first thing that stood out to me was how much sharper and detailed the image was without edge enhancement and other terrible and dated compression anomalies. While I wouldn't say this is the sharpest, most pristine picture I've ever seen, but it's the best The Jerk has looked on home video. Facial features, costuming, and little comedic details in the set work and production design stand out nicely.

Colors are bright and bold with lively primaries. Blues and reds are very striking and flesh tones have a healthy pallet without being too pink. Black levels and contrast are in good form, perhaps not inky black and there is a tad bit of blooming, but image depth is appreciable. Speckling and a few small scratches are the only minor age-related issues that are barely even noticeable. This is a big presentation win for fans who have waited for this film to get the just treatment it has long deserved. 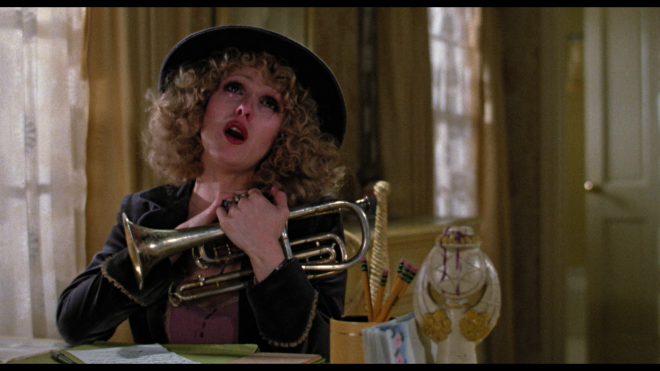 The Jerk rides to Blu-ray with a DTS-HD MA 5.1 track and a DTS-HD MA 2.0 mix. Both are pretty good, but personally, I favor the 2.0 stereo track - it sounds more natural to the film. I don't know for sure, but I'm willing to bet the 5.1 track is the same one from the previous Universal Blu-ray which I remember being alright but unremarkable. Dialogue in the 5.1 track is fine and key sound effects come through with great clarity, but those extra surround channels are pretty well useless and don't get enough activity to make it worth the effort. The 2.0 track pushes everything front and center with nice imaging. It may not sound as open as the 5.1 track, but overall I'd call it the healthier and more robust presentation of the two options. Levels are spot on and don't need any extra monitoring. 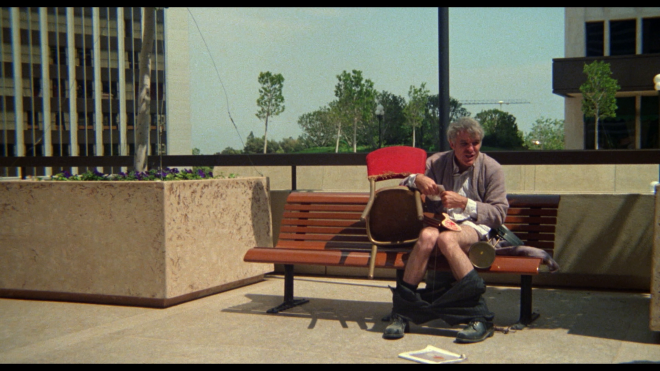 While I would have loved a commentary track for this 40th Anniversary Edition of The Jerk, I can't deny that Shout Select did a bang-up job bringing together a worthwhile selection of new bonus features. The conversation with Steve Martin and Carl Reiner is great and easily the best feature of the bunch while the Carl Gottlieb and Michael Elias conversation is pretty great as well. My only complaint is that there aren't several hours of this stuff, but what's here is grand material. 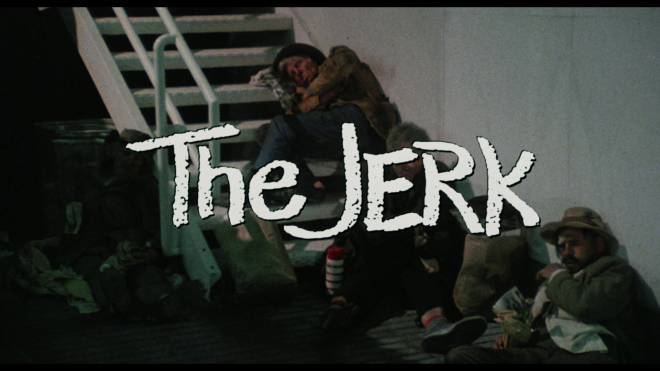 I love The Jerk; in my book, it's a classic comedy. Stupid, sure, but hilarious and endlessly entertaining. It's Steve Martin at his best with the assured comedic direction of Carl Reiner to milk the most out of the absurd premise and deliver one of the funniest films ever made. It's one of the few comedies I can watch over and over again and never get tired of. Shout Select delivers a true 40th Anniversary Edition of The Jerk that's worth celebrating. With a new and much-improved transfer and a solid new stereo audio mix complete with some great new interview bonus features, this disc is the one fans have been waiting for. Highly Recommended.