Robert Altman goes full noir-thriller by way of John Grisham with The Gingerbread Man. Starring Kenneth Branagh as a sleazy lawyer who gets in way over his head with a sultry Embeth Davidtz, the story plays to Grisham's traditional legal thrillers with a distinctly Altman point of view. It's an interesting blend of creative elements for a story that is pretty paint-by-the-numbers. Kino Lorber Studio Classics brings The Gingerbread Man to Blu-ray with an aged but decent A/V presentation and a great commentary track from Robert Altman to round out the bonus features. Better than average and pretty entertaining - this one is Worth A Look.

"The only exercise you are gettin' is jumpin' to conclusions."

Kenneth Branagh plays the 90s version of himself as Rick Magruder a sleazy Savannah, Georgia lawyer with severe fidelity issues and a knack for getting into trouble one way or another. In spite of his personal issues, he's a hell of a lawyer and occasionally tries to do the right thing. That's what he thought he was doing when he tried to help stranded waitress Mallory Doss (Embeth Davidtz) after her car was stolen. After sleeping with her, Rick discovers she's packed a lot of baggage - namely in the form of her crazy shoe-averse father Dixon (a tragically underused Robert Duvall). With the help of scummy private detective Clyde Pell (pre-prison Robert Downey Jr.), Rick tries to protect her any way he can legally, but when his kids are kidnapped, Rick proves he's more than willing to bend the law. 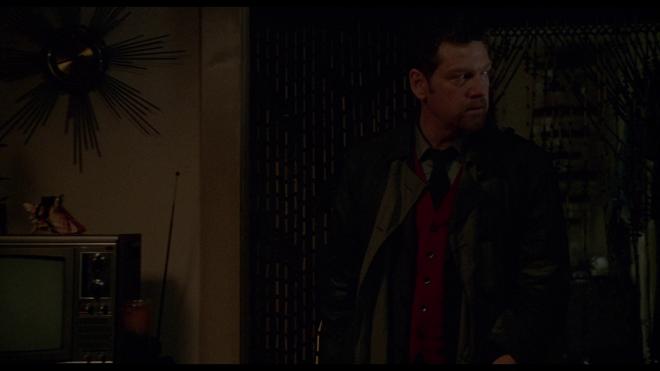 The Gingerbread Man was an original screenplay from John Grisham without any literary base. It was a long-gestating project that took years to come together. When Robert Altman came aboard to direct, he did a page-one rewrite with final credit ultimately going to Clyde Hayes. The final product plays more akin to Raymond Chandler's The Long Goodbye and less like a standard Grisham legal thriller. While there may not be many surprises in store for the audience, it's a good run and Altman gives a relatively routine flick a lot of character.

Headlining the show is a fine turn from Kenneth Branagh - a great actor who has some trouble not being the center of attention. Altman uses this to his advantage by casting Branagh as a sleazy guy who has a heart. You're never once supposed to like the guy and it's one of the few times where a character like this doesn't come out clean and clear. His actions have consequences even if he learned a few valuable lessons along the way.

In the typical seductress femme fatale role, Embeth Davidtz rolls with her part and does a great job playing the damaged but sultry object of Rick's obsessions. You know right away that she's up to no good but when you've got a shoeless crazy Robert Duvall running around, you can't blame Rick for being short-sighted. As the plot unfolds and the characters expose their true colors, the film follows the expected course of almost every action thriller with a rain-soaked climax in the middle of a hurricane.

While imperfect and far from Altman's best efforts, I do enjoy The Gingerbread Man quite a bit. As I mentioned in my review for The Chamber, I'm a bit of a legal thriller apologist and Grisham flicks were guilty pleasures. The Gingerbread Man proved to be the last film based on any of his works I saw in theaters. This one stuck with me more than others simply because it wasn't all courtroom hijinks with impassioned legal speeches and moralizing that would otherwise bog down most of his books and adaptations. This was a lean detective thriller that happened to feature a lawyer as the lead character. I'd love to see what the original script looked like before Altman got it, but as it stands, I'm pretty sure he made a number of necessary changes to make it work.

The Gingerbread Man slinks its way on to Blu-ray courtesy of Kino Lorber through their Studio Classics label. Pressed onto a Region A BD25 disc, the disc is housed in a standard Blu-ray case. The disc loads directly to a static image main menu with traditional navigation options. 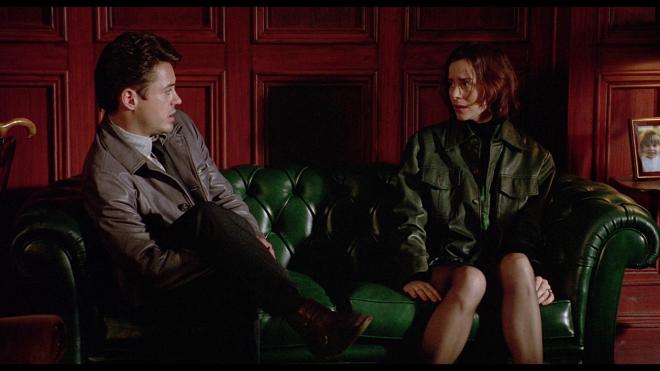 The Gingerbread Man arrives with a dated but still very good looking 1080p 1.85:1 transfer. This doesn't appear to be a recent scan, the image can be a bit soft and a tad flat in places, but overall the appearance is a nice step up over the very aged DVD. There is a slight veneer of film grain giving the image a pleasing film-like appearance without ever looking too noisy. Details are pretty strong allowing facial features in close-up and middle shots to shine. Again there are some soft spots that keep a few notable details from leaping off the screen.

Production design still comes through and the Savannah setting allows a lot of location character to fill the image. Colors favor rich browns and earthy greens. With the stormy setting, there isn't a lot of natural sunlight giving the film a dark and moody atmosphere - it looks great in some of the swampy locations. Flesh tones are appropriately healthy without looking too pink. Primaries are on point with nice vivid reds and blues in particular. Black levels can be a bit grey keeping some dark scenes from enjoying that deep inky black, but overall they're stable. The source for this transfer is in great shape without any speckling or notable scratching. 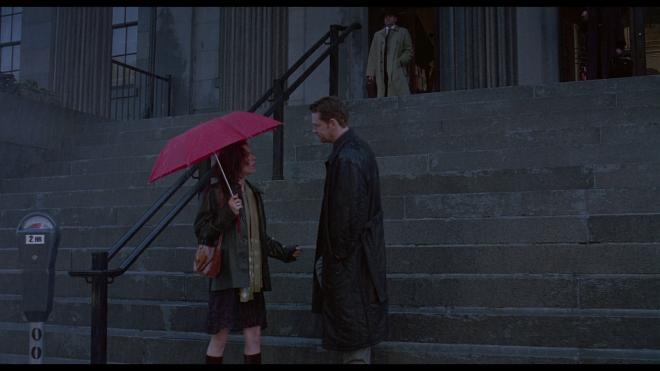 The Gingerbread Man is given a DTS-HD MA 5.1 mix as well as a DTS-HD MA 2.0 audio track that are both equally impressive - while both being a bit on the softer side. I felt like for both tracks I had to punch my volume up past my normal ranges for an average viewing experience. But once I got things up to a comfortable level, both tracks sounded great. Dialogue was clean and clear. Sound effects for the 5.1 mix offered plenty of subtle surround activity - especially in crowded scenes like Rick's office or during the brief trial sequence. The 2.0 mix is decent enough, it just loses out on some nice surround activity in the last act during the hurricane and during some of the action beats the mix can sound a bit flat and front-loaded. Overall both mixes offer suitable viewing experiences, I would just slip the 5.1 mix above the 2.0 out of personal preference. 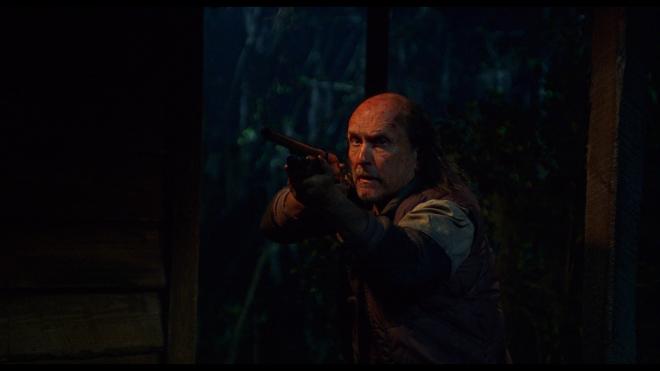 Bonus features for The Gingerbread Man may not be a bounty of content, but an Altman audio commentary track is always welcome. There are a few brief pauses here and there but he does a solid scene-specific commentary discussing working conditions, the film's ill reception from producers and the fight for the edit - as well as some nice things to say about working with Robert Downey Jr. just before he went to prison. 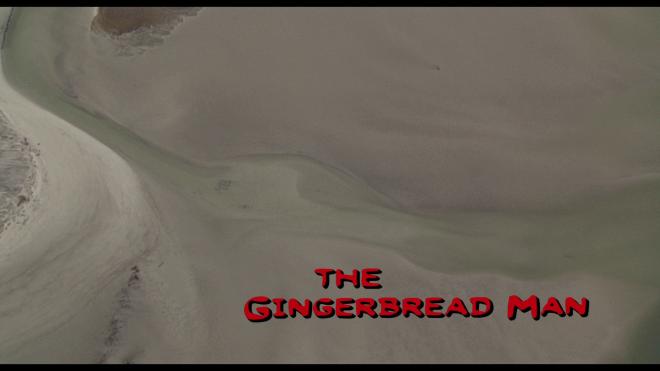 The Gingerbread Man probably marks the last really good John Grisham cinematic thriller to hit theaters - at least until someone decides it's time to start remaking The Client or The Pelican Brief. Robert Altman wasn't exactly on his A-Game, a better thriller is The Long Goodbye, but the master filmmaker showed he could still manage the genre and give a by-the-numbers plot some legs. Great performances from Branagh and Davidtz go a long way as the film may not be the greatest in Altman's catalog of films, but it's a worthwhile ride and very entertaining. Kino Lorber Studio Classics brings The Gingerbread Man to Blu-ray in fine order with a solid A/V presentation and a terrific commentary track with Altman as the primary bonus feature. If you're a fan of Grisham movies, check out what Altman was able to do with the genre. Worth A Look.