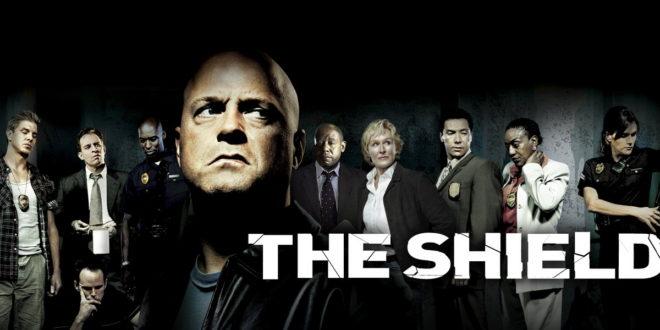 The Shield: The Complete Series

The Shield is a gritty police drama starring Michael Chiklis as Detective Vic Mackey, a rogue cop willing to use any force necessary to clean up the roughest neighborhoods of Los Angeles. Remastered for high definition and widescreen TVs for the first time, The Shield kicks down the doors to this Blu-ray boxed set with a vibrant-yet-soft video presentation, solid 5.1 DTS-HD MA soundtracks, and a bevy of bonus materials. Highly Recommended for series fans and for anyone looking for a binge-worthy crime drama.

The Shield is a landmark TV series for many reasons. It established a basic cable network as a competitor to premium cable. It redefined the image of an actor who was known for playing softer father figures. It launched the careers of writers who would go on to run shows like The Walking Dead and Sons of Anarchy. And it helped pave the way for serialized dramatic storytelling that makes up the bulk of modern series on cable and streaming platforms. In a sense, without characters like Tony Soprano, Jack Bauer, and Detective Vic Mackey, television as a medium might look completely different today.

Stepping back from the series' historical significance, The Shield is a gritty crime drama about whether or not the ends justify the means in a world where good guys don't have enough resources to fight bad guys. Inspired by the late 90s Rampart corruption scandal, The Shield is set in the fictional Farmington District of Los Angeles, a depressed area where crime rates are high as rival gangs vie for territory and politicians stuff their pockets with funds that should be going to the citizens.

Enter the Strike Team, an elite squad of detectives who aren't afraid to rough up the neighborhood villains on a quest to bring peace and justice to the community. The catch? The Strike Team is also corrupt, skimming off their biggest busts, planning heists against the city's most notorious criminals, and acting, effectively, as local crime bosses, choosing who gets to stay in the game and who goes to jail.

Are the Strike Team members, led by Detective Vic Mackey, heroes or villains?

That's the question The Shield explores over its seven-season run. Mackey and his crew certainly do very bad things, but they're also anti-heroes with a code. They're men who will burn down the world to protect women and children, and to serve up justice in a town when following the rules often fails to punish the ever-lurking evil in their midst.

A corrupt vigilante cop show might be interesting enough on its, but what makes The Shield transcendent is the other Farmington District police officers who work alongside Vic Mackey. CCH Pounder and Jay Karnes portray two earnest detectives -- Claudette and Dutch -- trying to make a difference in a cruel world. Catherine Dent and Michael Jace portray two patrol officers -- Danny and Julian -- who are out on the streets every day. Benito James Martinez portrays Captain Aceveda, an ambitious man who wants to make the leap from the police force to politics. Each one of the multi-cultural cast is drawn with complexity and demons and struggles. None are perfect, though they strive to be good people, and most of them are tempted by the wake of corruption left by Mackey and the Strike Team, which leads us to the second question the series asks...

When faced with corruption, can the good people bring down a vigilante without also becoming a criminal?

It's a fascinating exploration of the human condition, made all the more relevant in 2019 by America's continuing discussions about whether or not our police forces are too militarized and/or racially biased. It's a show swimming in darkness that asks each and every viewer, would you want Vic Mackey and the Strike Team in your city protecting you? And, can you have justice in a world where the constitution is ignored, where no judge and jury play their part?

The Shield The Complete Series hits high definition for the first time as an 18-disc boxed set, courtesy of Mill Creek Entertainment. The outer packaging is thick, rugged cardboard that closes with a magnet. Pop it open to reveal the show's piecemeal police badge emblem (from the opening title treatment), which is actually the cover the digibook itself. If you own the Alien Anthology, you'll be familiar with this style, which houses one Blu-ray per page. 16 discs are dedicated to the show's seven seasons, while two discs hold the bonus materials new and old. Unfortunately, Digital Copy streaming rights are not included with this release. The discs and packaging are marked Region A.

The Shield makes its high-definition debut with a remastered and reframed 1.78:1 widescreen 1080p HD video presentation. According to Shield creator Shawn Ryan, the show began a "4K conversion" in the summer of 2015 after a few test proved they could preserve the show's "gritty, grainy look." Although originally framed for standard definition TVs, Mr. Ryan stated on Twitter, "We always filmed it widescreen and edited it to be safe for that. It aired foreign in many places widescreen. I kept it 4:3 on air because I didn't think widescreen TVs were widespread enough."

While it's unclear exactly what went into this conversion, the results are generally positive, although there is a question of overall sharpness. Still, the overall takeaway is that The Shield has never looked better. Skin tones are even and natural for the various interior, exterior, day, and night sequences. The gritty, grainy look is, in fact, well preserved, with the whole show feeling very filmmic, yet never overburdened by noise. While the show isn't a particularly colorful one, these Blu-rays render the streets of LA accurately and vibrantly, with pops of blue sky, graffiti'd walls, and neon lights. Contrast is also on point; the filmmakers frequently push background highlights but they never seem toasted (much of this thanks to how film handles over-exposure compared to digital image sensors).

However, much like the recent Rescue Me boxed set, I wonder if placing roughly seven episodes (around 5.5 hours of content) per disc is too much? While these discs don't suffer the crummy, smearing and macroblocking of most (even today) FX and AMC broadcasts, I would say The Shield seems a little over-compressed at times, especially in particularly active nighttime sequences where I would have like to see a little more detail, deeper black levels, and even contrast. I was also surprised to see a few instances of dirt and debris, especially after such a long remastering process.

Perhaps the biggest concern is overall sharpness. Wide shots are generally pleasing, but when you compare close-ups of this show with others from the era (those most likely shot on 35mm), The Shield is noticeably softer. It's not a dealbreaker and, despite a few flaws, the show looks almost brand new.

The Shield boasts solid 5.1 DTS-HD Master Audio soundtracks on all 88 episodes that does a good job of building out the show's world, but doesn't engage enough rear surround and LFE activity to compete with the best TV show soundtracks.

Still, while we've heard a few shows be a little more active and precise in their use of surround sound, The Shield sounds great on this Blu-ray. Especially for those early seasons that were, during the original broadcast, only available in stereo. Despite the show's proclivity for tense action, The Shield is a very talky drama, with heroes and villains frequently trading fast-paced barbs and insults. In all of these scenes, various spoken languages are even and easy to understand. There are no signs of poor recordings despite a number of busy on-location settings.

Speaking of which, ambiance and world-building effects are well-layered, creating a believable sense of life in The Barn and around Los Angeles. Sound effects like gunshots and car-crashes boom with authority as well, though I would have liked a touch more LFE presences. The show's music renders across a wide soundstage, adding to the drama. Overall, The Shield sounds quite good -- better than broadcasts -- but isn't quite as immersive as television's best.

The Shield The Complete Series boxed set includes all the special features from previous DVD release plus a few exclusives produced for this release. The coverage is extensive and, at times, overwhelming, but it's also a fine tribute to one of television's greatest series.

The Shield helped change television forever, ushering in a new golden age of serialized dramatic storytelling that we're still experiencing a decade after this show finished its seven-season run. If you've never seen this show, but love gritty crime dramas, there's no better way to dive in than Mill Creek Entertainment's 18-disc boxed set. With handsome packaging, remastered HD video, lossless 5.1 audio, and a money train of special features, it's Highly Recommended to series fans or anyone looking for a binge-worthy show.

Sale Price 74.99
List Price 229.98
Buy Now
3rd Party 74.99
In Stock.
See what people are saying about this story or others
See Comments in Forum
Previous Next
Pre-Orders
Tomorrow's latest releases