Brian de Palma's 1976 very Hitchcockian thriller Obsession pulls out all the stops as a grieving Cliff Robertson's life is turned upside down when he meets a young woman who looks exactly like his deceased wife. This perfectly paced and deliberate film slowly builds tension and suspense leaving a few bread crumbs for the audience to follow until it reaches another truly classic De Palma ending. Scream Factory finally brings Obsession to Blu-ray in North America with an absolutely fantastic release. Sporting a beautiful transfer, a solid audio mix, and a terrific collection of bonus features - this is another amazing Blu-ray release for De Palma fans. Highly Recommended.

Nearly 20 years ago, Michael Courtland's (Cliff Robertson) life was destroyed - his wife and child killed in a kidnapping gone wrong. Unable to find closure, he's spent years digging into work as a real estate land developer with his partner Robert (John Lithgow). After Robert persuades his grieving friend to come with him on a jaunt to Florence, Michael is shocked to meet Sandra (Geneviéve Bujold), a young Italian woman who looks exactly like his dead wife Elizabeth. Believing she's his chance to regain his life, Michael swiftly woos the young woman and brings her back to New Orleans for a wedding and spiritual rebirth. Only dear Sandra is much more than the apparent reincarnation of Elizabeth. 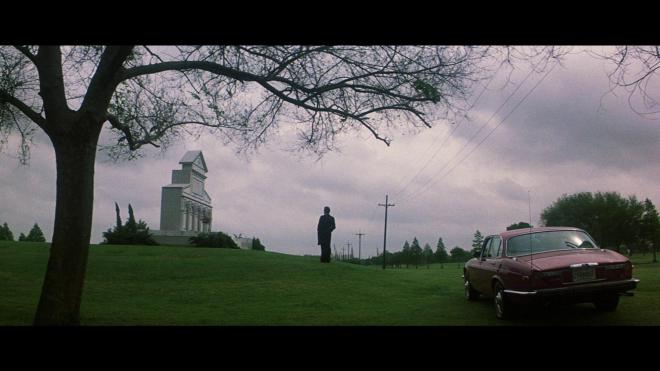 I feel like to fully and truly appreciate Brian De Palma's films, you need to see them release order. As De Palma's career grew and he moved onto larger budgets and a franchise film like Mission: Impossible in the 1990s, he fell into a bit of a creative rut of using the same set of stylistic tricks. From the timing of the swelling sweeping orchestral scores to slow-motion montage-style edits to literal hand-of-god endings - you start to see the same tricks enough times that if you've seen his later films they almost spoil his early works.

Such is the case when I discovered his 1976 thriller Obsession. By the time I got to this terrific Cliff Robertson fronted little Euro-thriller, I was about ten paces of the plot simply because I'd seen so many of the same cues in later movies like Blow Out, Dressed to Kill, The Untouchables, Raising Cain, and even to a degree with the first Mission: Impossible film. Don't get me wrong, Obsession is a masterfully constructed picture with intricate plot details and expert pacing - I just felt like I was already used to a number of his tells that some of the best twists and surprises were spoiled by technique.

That isn't to say that Obsession isn't a great film - it is - or that it isn't worth watching - you absolutely should - but if you haven't seen this one yet, you may be slightly disappointed or underwhelmed by the big surprise. Thankfully the film's structure, pace, and the amazing performances keep things chugging along. Cliff Robertson delivers one of his best performances as Michael. That guy knew how to express anger and remorse in just a simple glance that you feel for his character - especially as his long hoped for rebirth begins to unravel. I want to talk about Geneviéve Bujold's Sandra but I don't want to spoil anything - tell too much and you ruin a big reveal. Then you have De Palma regular John Lithgow who was in peak form here as a sleazy double-dealing New Orleans real estate man - the kind of guy you'd happily by a track of useless swamp land from and call it a farm all because of his natural slimy charm.

While I may have accidentally slightly spoiled Obsession for myself the first time I saw it years and years ago - it's remained a favorite. From the dreamy pacing to Bernard Herrmann's incredible score to the slow-mo ending - There is a lot to love and appreciate with De Palma's efforts here. He may be aping a lot of Hitchcock's signature moves, but he does it so masterfully that it's still engrossing. If you've yet to give Obsession a run, nows the time. It's a great flick. If you're new to De Palma, this is a great early work to start your discovery with. If you've seen many of his later movies, you may be in on some of the tricks he uses but the payoffs should still be a surprise.

Scream Factory delves into Brian De Palma's Obsession with a single-disc Collector's Edition Blu-ray release. Pressed on a Region A BD-50 disc, the disc is housed in a standard sturdy case with reversible artwork and an identical slipcover artwork. The disc loads to a static image main menu with traditional navigation options. 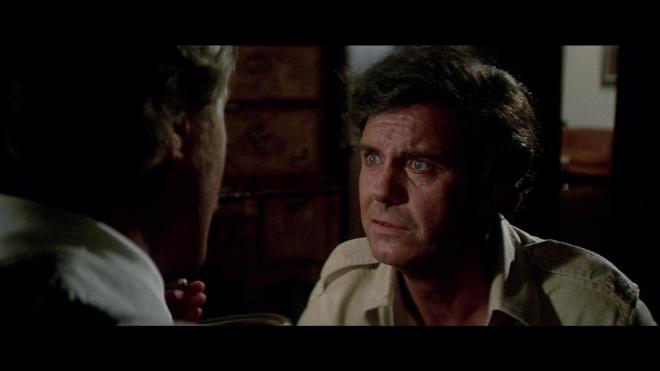 The artwork doesn't indicate the vintage of this 1080p 2.35:1 transfer and after doing some digging around it does appear to be the same scan sourced for Arrow Video's EU release back in 2011. While that may give some folks pause about the quality of an older scan - this isn't a bad thing at all! This is a beautiful film with incredible cinematography by Vilmos Zsigmond who also shot Deliverance, Close Encounters of the Third Kind, The Deer Hunter, and De Palma's Blow Out - so you can expect the same sort of dreamy softly diffused look with highlighted whites and bold colors as those films. As such, detail levels can fluctuate according to the theme of the moment. As Michael's fantasy of his new life with Sandra builds, the softer the image gets. When the nightmare begins to unravel, the clearer it gets. It's a wonderful ebb and flow of the visuals that this transfer captures perfectly.

Colors are robust with healthy skin tones, bright primaries (when called for). Again the film's colors are steeped in the visual theme of the moment tracking a course for Michael's fluctuating moods. Black levels are nice and inky with a terrific sense of depth to the image. Contrast is on point for this film - blooming happens because it's supposed to happen. The source elements for this transfer are in great shape with only some occasional speckling to report. This is a terrific film-like transfer. Obviously, I'd love to see what a new 4K restoration could offer but if this is all we're going to get I have no complaints as this is a damn beautiful looking film. 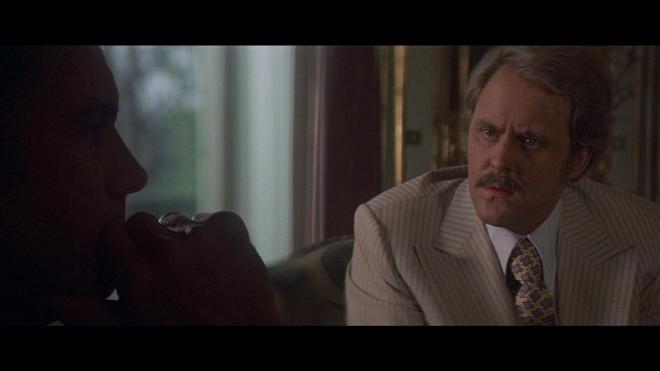 Sound design is a major player for Obsession and the included English DTS-HD MA 5.1 and DTS-HD MA 2.0 mono tracks deliver the goods. However, I would tip my had to the 2.0 Mono as my preferred auditory presentation. Dialogue for both tracks is strong, but there are a couple moments here and there where it felt like the dialogue in the 5.1 mix could sound a little muffled - and not experience that same muffled sense in the 2.0 mix. Sound effects and ambients do a nice job of establishing space and dimension - particularly in large open scenes like the church when Robertson's Michael meets Bujold's reborn Sandra working on the fresco. Bernard Herrmann's incredible score comes through crystal clear and loud - as it's supposed to - to the point that it is often the only active sound element - it's a great effect that works in the context of various scenes that I won't spoil for you. All around both tracks are solid. The 5.1 mix does offer some extra spacing and atmosphere and does let the Herrmann score shine - but I feel like the 2.0 mono mix is the better, more natural sounding of the two. 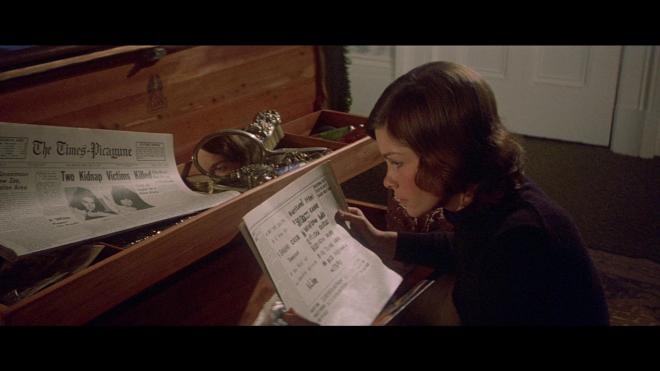 Scream Factory goes all out and gives Obsession true Collector's Edition status with a terrific assortment of new bonus features for fans to pick through. The Douglas Keesy audio commentary is pretty good - informative - but at times it feels like he's reading off a script in time to the events of the film. It's still a great track. The interviews with editor Paul Hirsch and producer George Litto are nice and anecdotal if not altogether informative while still giving a little insight into the making of the film. 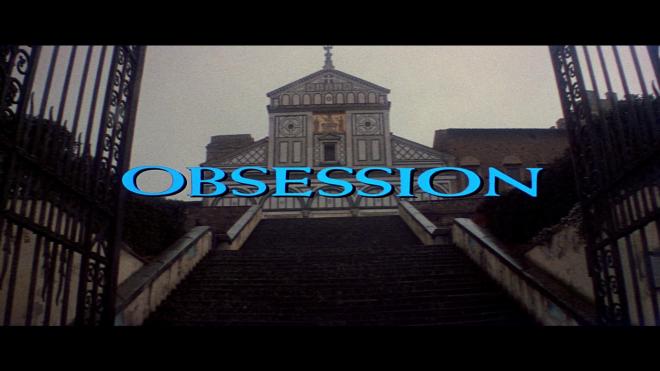 Brian De Palma's Obsession may be another exercise in his appreciation of Alfred Hitchcock - but he executes this thriller with such ease and finesse that you hardly notice some of the obvious plot twists. It helps that this film was buttressed by a trio of excellent performances with Cliff Robertson delivering another richly emotional performance as Geneviéve Bujold gets to play the sultry woman with a secret while John Lithgow gets to deliver another memorably sleazy performance in a De Palma film. This talented cast along with a smart script by De Palma and Paul Schrader are what makes Obsession a tight and unnerving thriller. Scream Factory brings Obsession to Blu-ray with fantastic results featuring a beautiful transfer, a pair of effective audio mixes to choose from, and a nice worthwhile collection of bonus features. Highly Recommended.

Sale Price 24.46
List Price 34.93
Buy Now
3rd Party 19.71
In Stock.
See what people are saying about this story or others
See Comments in Forum
Previous Next
Pre-Orders
Tomorrow's latest releases