Starman is John Carpenter at his most hopeful and optimistic. Featuring an Oscar-nominated performance from Jeff Bridges and a no-less worthy performance from Karen Allen, the film is a heartfelt road trip to discover what it means to be human and humane. Scream Factory brings Starman back to earth for its second North American release featuring the same decent video transfer, a slightly-upgraded new DTS-HD MA 5.1 audio mix, and a new collection of interviews with some archival bonus features. If you bought the previous Sony release, this may not be enough to warrant an upgrade. If you don't have this one already, this is the best North American release - so far. Worth A Look.

As I feel our review for the previous 2009 Sony release was pretty damn good, I encourage you give it a READ.

"Tell me again - how to say goodbye."

As the story of John Carpenter's Starman is well known and a fan favorite, I'll be forgoing my usual plot recap since it's redundant at this point. I feel this space is better suited for me to explain why Starman is one of my favorite films. While I admittedly have many favorites, under the hypothetical situation where if I were stranded on an island and I could only bring 10 movies with me, I would be hard pressed to make room for this one. There's a beautifully calming nature to the tone that I wouldn't be able to leave it behind - even though I would more likely bring something like They Live or The Thing to fill my Carpenter quota. Between Carpenter's steady direction, Jeff Bridges' and Karen Allen's performances, and the incredible Jack Nitzsche score - I've always connected with this movie's optimism. 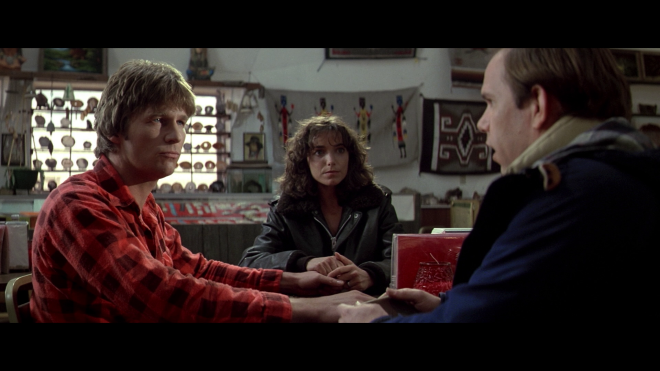 When you look back at the cannon of Carpenter films, he's not exactly known for a bright and sunny outlook. Aside from Big Trouble in Little China and Memoirs of an Invisible Man, Carpenter was very rarely playful or allowed his stories to end in a way that wasn't steeped in cynicism or nihilism. Starman is a thematic outlier in his incredible career. Primarily a love story, this one is ultimately about what makes people - good or bad - human. Even when certain characters are at their worst there is an understanding of where they come from and what makes them tick. There's a reason for their behavior and aren't one-note caricatures.

Stylistically Starman is a true Carpenter show but I feel it's the key performances from Jeff Bridges and Karen Allen that makes it something unique. This isn't to say that Carpenter's other films are populated by unmemorable performances or actors - it's the heart and chemistry these two actors share that allows you to connect to the material. From the get-go it's clear to see how and why Bridges got his Best Actor nomination - his alien is an intelligent being trying to fit in and appear to be one of us. He's learning how to be a better human. But his performance works because Allen plays such a terrific teacher. Her character has a wounded heart and by showing him how to be human she gets to live again and see that the world is worth being a part of.

Starman is sentimental without being sappy. It's sweet-natured and human without being saccharine. It's got a heart but not so dopey that you'd find it stuffed onto the Hallmark channel. As I said, it's John Carpenter as his most optimistic. There's a genuine appreciation of the world and the people that populate it. While I love all of his horror/sci-fi movies, I love Starman in its own unique way. It's different from anything else he did and it's a pleasant standout in his catalog that I love to come back to again and again.

Starman lands in Noth America for the second time in a Collector's Edition courtesy of Scream Factory. Pressed onto a Region A BD50 disc, the disc is housed in a standard sturdy case with identical slipcover artwork and reversible slip artwork revealing the original poster art. The disc loads directly to an animated main menu with a traditional navigation menu system. 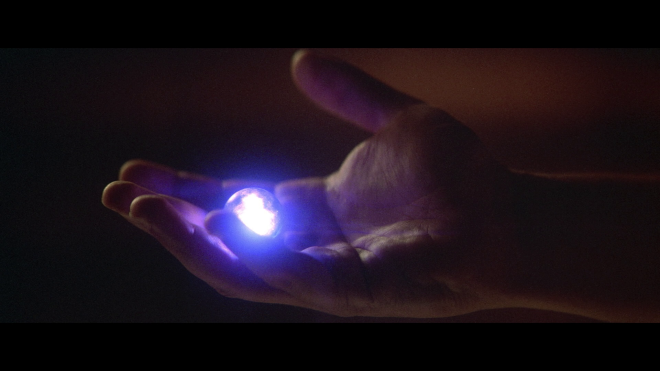 Well, here is the sticking point of whether or not to purchase Scream Factory's release of John Carpenter's Starman. This is the exact same 2.35:1 1080p transfer that Sony sourced for their Blu-ray in 2009. When you realize that disc is now very nearly 10 years old, you lament the fact that this film hasn't undergone any sort of new restoration or scan of the original elements in that time. While not the greatest demo-worthy example in its day, this transfer was pretty good for a barebones release in 2009. A scant few days away from 2019 - it ain't good enough, especially for a John Carpenter release. As we're well on our way into 4K UHD, one has to wonder how long before this one doesn't make an appearance on that format? Such as it is, this presentation is fine. It gets the job done, but there is obvious room for improvement. 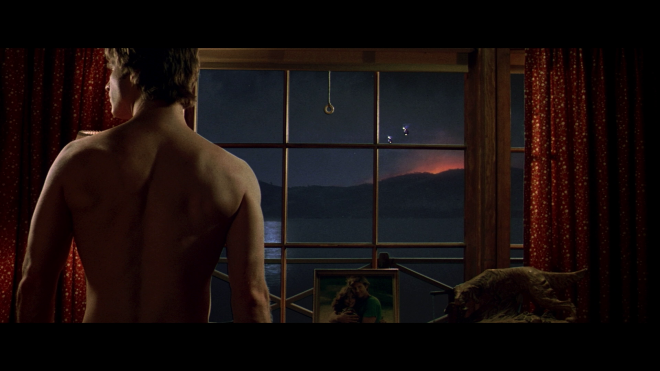 Starman lands on Earth with a DTS-HD MA 5.1 audio mix. I wish I could say that this mix is an overwhelming improvement, but it isn't. While in some respects - namely dialogue exchanges and object surround placement - this mix is better than the previous Dolby TrueHD 5.1 mix. However, this new DTS-HD MA 5.1 track lacks a lot of oomph during big action sequences or explosions. Doing some disc flipping between the two releases, the first real noticeable difference hits when Starman's spacecraft is shot down and crashes into the woods in Wisconsin. The ensuing explosion and fireball aren't nearly as powerful or impactful as the TrueHD track and the sizzle and spark of the burning woods aren't as pronounced. Later when their car crashes into the gasoline tanker, the same thing follows where explosions sound weaker. However, this mix isn't a complete loss. The rest of the mix is on point. It feels like there is a more dynamic channel movement with stronger atmospherics. The incredible Jack Nitzsche score is just as pronounced. Overall this is a good mix but not a vast difference. I'm ready for a true object-based audio mix for this one. 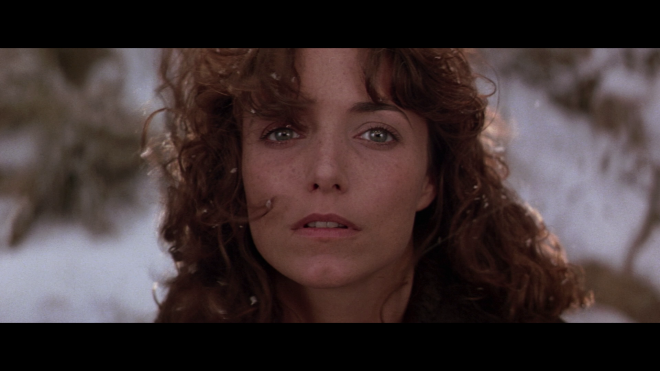 While the new transfer and the audio mix weren't the huge upgrades folks were gunning for, this release of Starman rights the wrong of the previous Sony disc by including a solid mix of new and archival bonus features. It's not a lot but it's the reason to snatch up this disc. The new set of interviews with Carpenter, Bridges, and Sandy King Carpenter and Charles Martin Smith is the new highlight of the disc; it's great material. 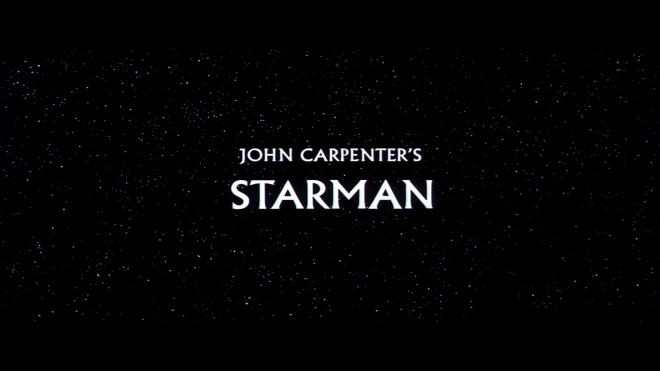 Starman is one of my favorite John Carpenter films because it's so different than anything else he made before or since. When you look at most of Carpenter's classics there is an underlying feeling of cynicism that's either reflexive of society or how the director views the industry he's working in at the time. There isn't that cynicism in Starman. It's optimistic and hopeful for the world and the people in it. With Carpenter's subtle directorial touches and the terrific performances from Bridges and Allen, I feel like this film doesn't get as much credit as it deserves.

Starman returns to Blu-ray in North America for the second time courtesy of Scream Factory in a new Collector's Edition that frankly doesn't add a whole hell of a lot to the package. The A/V presentation is decent enough though the video transfer shows its age and the new DTS-HD MA 5.1 track isn't a huge upgrade. The reason to own this disc is for the bonus features, even if there's only one new extra feature and the rest is culled from previous DVDs. If you never bought the previous 2009 Sony disc, this one is Worth A Look. If you already have the old disc, keep it for now until the film properly restored and cloned onto 4K UHD.