Urban Legends: Final Cut succeeds at creating a more meta, movie-within-a-movie take on the franchise. The film and script are at their sharpest when playing within its film school setting, using the location as a backdrop for some inventive fake-outs. At times, Urban Legends: Final Cut isn’t as clever as it thinks it is, but it does a good enough job at giving us the same quality as its predecessor, while at the same time adding its own unique flavor. This isn’t the jam-packed Collector's Edition Urban Legend was, but it provides enough Special Features, and decent enough Video and Audio transfers, that it is Worth A Look for slasher fans. 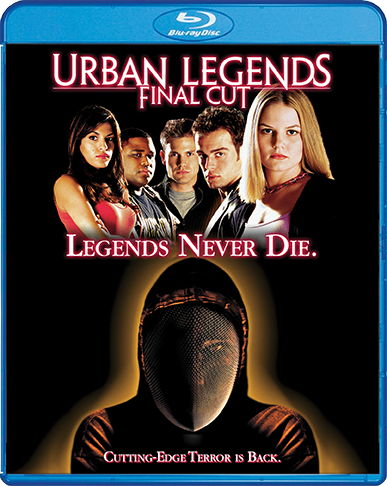 Ahhh the inevitable slasher sequel. Audiences have been bombarded with slasher sequels since the genre was created in the mid to late 70s, long before the more recent parades of big-budget action flick sequels. By the time 1998 rolled around, even though Urban Legend was a modest hit, making roughly $38 million domestically on a $15 million budget, the younger and less wise me knew that in just a few years we would be looking at a sequel that attempted to cement its killer as a new horror “icon.”  And guess what? With the profit margins on such low-cost ventures, we are going to get that sequel starring that killer whether we want it or not. But there are a few sequels that actually surpass their predecessors in quality. Especially with a director that has a fresh or unique vision.

Urban Legends: Final Cut starts out on the right foot, with no time wasted introducing us to the film’s biggest hook. Released between Scream 2 and Scream 3, we get the ‘movie within a movie’ subplot. Amy Mayfield (Jennifer Morrison) is a film student working on her final film assignment at Alpine University, in a class filled with colorful characters that love to fake us, the audience, out with props and gags, along with each other. It instantly makes this particular film feel even more meta and referential than its predecessor, as it knows all the usual genre clichés and uses them to punk the audience out and reveal it was actually a scene being played out from Amy’s Urban Legends final film. Is this a little too meta for its own good? Maybe. We have actually seen it well before this, so it isn’t half as fresh as they want it to be. But it is still an interesting new dynamic that helps this particular entry stand out from its predecessor. Plus, our characters can come across very dower and wooden, so whenever you put them back on the set it feels like a breath of fresh air, not just from a script perspective, but for the characters as well.

Of course, what is an Urban Legend sequel without a Scooby Doo style mystery? Here, it is during the filming of Amy’s Urban Legend thesis film, where her cast and crew start getting offed in mysterious ways that has Amy curious. In true Nancy Drew fashion, Amy then attempts to investigate the murders until she is the only one left standing on set, and the only one to blame. There are a few interesting choices here, but the most apparent is the changes being made to our killer. Gone is the hooded parka from the previous film, replaced by a…. fencing mask? It is a curious creative choice to make, and one that to me doesn’t pay off. I know the fencing mask may fit in better with the film school atmosphere. Maybe? But it also reveals that the filmmakers don’t care about continuity with its “iconic” character they are obviously trying to build. Then there is the fact that we have quite a few male side characters that share the same Calvin Klein, GQ look, making them indistinguishable from each other outside of the film class where their personalities shine through. In fact, besides our lead and the always over the top Anthony Anderson, most of the cast here fades into the background, and isn’t as colorful as its predecessor’s.

On the flip side, Urban Legends: Final Cut does an excellent job at understanding what its audience wants more of in a sequel. Right from its first kill with a person's head getting cut off by a window closing, it is apparent that more gore is exactly what they are going for. And that isn’t necessarily the wrong way to go. In fact, both the dialed-up kills and film school setting work as an asset to distract from the more uninspired elements. Composer turned director, John Ottman, has infused this film with its own style that works to set itself apart from its predecessor. With its own set of strengths and weaknesses, in the end, Urban Legends: Final Cut actually achieves the rare feat of being just as good as Urban Legend.

Shout! Factory sends Urban Legends: Final Cut to Blu-ray with a hardcover casing, skipping the reimagined slipcover Urban Legend had the privilege of getting. Enclosed lies a BD-50 dual-layer Blu-ray with no DVD copy or digital copy to be found. On the positive side, they included a nice reverse cover art that is, oddly, not reversible, but instead offers interesting backing for the interior. Once popped into the Blu-ray there are no theatrical trailers and we are brought straight to the still image main menu that lets us navigate from there.

Urban Legends: Final Cut slashes its way on to Blu-ray with a 1080p MPEG-4 transfer that doesn’t quite stand as high as Urban Legend does, but still has some merit nonetheless. While being filmed on 35mm, this was put through a 2K scan before being given a newly minted 2K DI. Clarity and sharpness are a little bit of an issue, as many lighter outdoor scenes appear softer than I personally would have expected given how well-done Urban Legend was in that department. Detail also takes a minor hit with close-ups and facial features not revealing as much as one would expect. Wider indoor shots reveal the most detail in fibers of clothing, props, and woodgrain paneling that make up the campus.

Framed at an aspect ratio of 2.40:1, black levels fare reasonably well here. Quite a bit of this movie does take place at night in intentionally under-lit settings, but at no time do blacks appear to protrude on the finer details. There is also a nice inky tone to blacks here that comes with filming in 35mm that I actually do miss in more modern movies that are filmed digitally. Initially you would think Urban Legends: Final Cut would possess the same quality as its predecessor, but instead what we are given here is a decent first go around for this film on Blu-ray that can be a bit inconsistent and counterintuitive at times.

Urban Legends: Final Cut takes its first stab at the Blu-ray format with a DTS-HD MA 5.1 mix that is more or less what one would expect. The LFE channel is the true star, with bass response that can be quite dynamic, providing hard hitting deep moments of gory action, and higher hitting bass that the score calls for. Fronts can be used aggressively and can be a bit of a problem, with surround usage feeling a bit too soft and not as prominent during action moments as one would expect. The score that was also done by director John Ottman does provide most of the surround usage and is the only activity I heard come through clearly. Vocals are clear and audible, while overall volume isn’t an issue. Urban Legends: Final Cut’s mix won’t wow anyone, but instead is perfectly serviceable.

Urban Legends: Final Cut is by no means a good movie. But that doesn’t necessarily mean it’s without merit. Director John Ottman had a very strong vision for where to take this sequel, and how to differentiate it from its predecessor. Unfortunately, that is only mildly successful due to bland performances, and a killer that bears little to no visual resemblance to the original killer. At its best, this can serve as a case study on how to make a sequel have its own distinct flavor, and the trappings that come along with that. Nevertheless, we are given a worthwhile release with a decent number of special features and average video and audio quality. This release serves as the exact definition of Worth A Look for fans of the genre.

Sale Price 24.9
List Price 29.99
Buy Now
3rd Party 23.59
In Stock.
See what people are saying about this story or others
See Comments in Forum
Previous Next
Pre-Orders
Tomorrow's latest releases