Writer-director Ari Aster makes his feature-length directorial debut in Hereditary, an exceptionally masterful horror film demonstrating Aster as a highly promising talent. Starring Toni Collette in arguably the greatest performance of her career, the story of a family teetering on the brink of insanity after a tragic loss is ultimately a drama at heart immersed in a palpably-thick atmosphere of apprehension and dread that slowly unfolds to a spine-chilling conclusion. The nightmarish family tragedy haunts Blu-ray with a stunning video presentation and creepily immersive DTS-HD MA soundtrack. Although supplements are disappointingly lacking, the overall package is Recommended for passionately dedicated horror-hounds. We've also reviewed this movie on 4K Ultra HD Blu-ray.

About half an hour into Hereditary, we arrive at the catalyst of the story, a dreadfully shocking and tragic incident inciting this exceptionally masterful horror film into action. And I was completely sold, immediately sucked into this terrifying world oozing in ambiguity and an unexplained chilling ambiance. Part of what makes this scene so immensely impressive is the rapid turn of events, how terrifyingly quick a seemingly normal high school party can spiral unexpectedly out of control and into disaster. The other, and most important, part is writer-director Ari Aster's talent behind the camera, keeping audiences glued to their chairs while still tightly gripping the armrest, appalled by what they've just witnessed. Immediately after the accident, Aster holds a close-up of 16-year-old Peter (a terrific Alex Wolff) in a long take, denying us the opportunity to see the ghastly tragedy. Wolff's reaction is remarkable and unbearably realistic, wanting to see but not see at the same time while in a stupor. And we're in a similar position, mouth agape in bated breath, dumbfounded by what just occurred.

Herein is the heart of the entire production's success, what is at the very core of any good horror film, which we've seen only seldom in the recent mainstream resurgence of the genre. And that is genuine dramatic performances of believable people caught in frighteningly extraordinary circumstances where escape feels nearly impossible. Outside of Wolff's standout portrayal of a traumatized teen on the brink of a mental breakdown, the real highlight is Toni Collette as Peter's mother, Annie, a miniaturist artist wrestling with her own inner demons while grappling to retain her sanity. This is Collette's show, at the center of a family's unraveling after experiencing heartbreaking loss, and she is simply phenomenal, giving the performance of a lifetime. After the death of her secretive, estranged mother, Collette visits a local support group where she delivers a soliloquy detailing the history of her family, one fraught with deep, psychological scars. Granted, it's an ingenious bit of exposition, but more importantly, it's a scene that allows Collette to flex her acting chops before the real fright-fest commences. 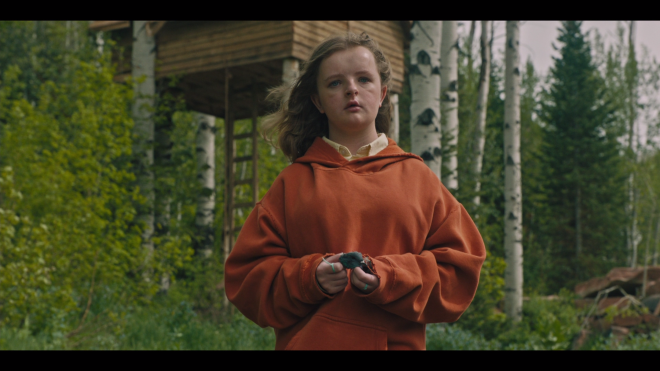 Of course, a case can be made that the horror starts at Annie's mother's funeral where 13-year-old Charlie (a fantastic Milly Shapiro) sees strangers disturbingly smiling at her or doing strange rituals to her grandmother's corpse. But again, this only brings us back to the performances. Making her film debut, Shapiro is far more subtle and reserved, and in that restraint, the young actress promptly gains our sympathies while simultaneously making us feel uneasy about her, especially after scissoring the head of a pigeon. Ceaselessly twiddling her fingers and making kneeling figurines from random junk, Charlie is a socially awkward kid who walks barefoot outside and prefers to sleep in her treehouse, which feels reminiscent of the Baba Yaga, a witch of Slavic folklore. The only person in this damaged family staying afloat is the kids' father Steve (a sadly underused Gabriel Byrne), but even he slowly shows signs of collapsing under the weight of having to deal with a wife who may or may not be going insane, a big chunk of the mystery that carries much of the story before revealing the gruesome reality.

And frankly, the astonishing beauty of Hereditary is how Aster keeps us engrossed in this thickly congested air of mystery and apprehension, which is the other critically important aspect of a good horror feature, aside from the performances. From the start, the young filmmaker, making his feature-length directorial debut, establishes an anxious-riddled and foreboding mood that steadily swells and expands as the story evolves into a larger, hair-raising puzzle. Even a friendly face like Ann Dowd's Joan, a support group member who tries to comfort Annie, comes with some doubt and suspicion — largely aided by Aster's very subtle clues, of course. But as the story lurches forward, the director turns the screw tighter on the grim and dreary atmosphere, feeling so palpable by the third act that the suspense suddenly shifts to a ghastly, nightmarish phantasmagoria, answering questions as much as leaving us in sickening dismay. The skill and talent behind this masterpiece of modern horror is very promising, leaving passionately dedicated aficionados, like myself, hopeful of the genre's future.

Lionsgate Home Entertainment and A24 bring Hereditary to Blu-ray as a two-disc combo pack with a flyer for a Digital HD Copy. The Region A locked, BD50 disc is joined by a DVD-9 copy of the movie and housed inside a blue, eco-elite case with a glossy slipcover. After several skippable trailers, viewers are taken to a static menu screen with music.

A family's tragic mental breakdown seethes and boils into a nightmare-inducing vision on Blu-ray with a terrifyingly splendid 1080p/AVC MPEG-4 encode. Within the first opening moments of the miniatures and the slow transition to the Graham household, viewers will immediately note the tiniest detail, aspect and distinctive feature of the architecture and the materials used for constructing them. Shot entirely on the Arri Alexa digital camera system, the freshly-minted transfer is consistently sharp with outstanding definition in the threading and stitching of clothing and in the fabric of furniture. The blades of grass and leaves of trees distinctly move independently of each other, the thick, rough bark is apparent even from a distance, and we can clearly make out the grain of the wood in the treehouse. The dense, frizzed hair of the characters is strikingly discrete at all times, and facial complexions are highly revealing with incredibly lifelike textures, exposing every pore, wrinkle and negligible blemish in the cast.

Presented in its original and unusual 2.00:1 aspect ratio, the video shows a heavily stylized cinematography with an attractively restrained contrast, giving the movie a dreary, grayish and solemn appeal that suits the subject matter, making the presentation faithful to the filmmakers' creative intentions. Nevertheless, whites remain absolutely crisp and brilliant throughout, allowing for excellent visibility of the background information. Brightness levels appear to be somewhat affected by the photography, looking a tad lackluster, murky and somewhat flat in daylight sequences. However, at night, blacks are significantly stronger and inky with deep, stygian shadows that penetrate deep into the screen without sacrificing the finer details within the darkest corners. The overall palette is also understated and noticeably toned down as part of the film's gravely somber aesthetic, but primaries remain richly-saturated and accurately rendered while secondary hues provide a bit of life and energy to the story, especially the bright golden yellows that creepily bathe the Graham house. (Video Rating: 94/100)

The creepiness of the unknown is made all the more terrifying thanks to a marvelously sinister DTS-HD Master Audio 5.1 soundtrack, the same track shared with its Ultra HD Blu-ray counterpart. While an object-based audio option would have been a much-welcomed upgrade, this track nonetheless delivers a fantastic, tension-filled aural experience sure to creep out viewers.

Filling the room with a forbidding, ominous air right from the start that never lets up, the design is skillfully inventive in its use of ambient effects discretely and flawlessly panning between the channels. Granted, the sides are mostly reserved for specific, hair-raising moments, such as the tongue-clucking noise or the pages of Charlie's notebook flipping by themselves, but they're employed effectively enough for creating a satisfyingly eerie soundfield. Meanwhile, other atmospherics, like the wind blowing through the trees, birds chirping in the distance and the chatter of school kids, do well in keeping the listener immersed in this macabre world. The lossless mix also lends itself splendidly well to the receiver's Dolby Surround or DTS: Neural:X up-mixing functionality, effortlessly spreading many of those atmospherics into the overheads.

Arguably, the best and most noteworthy aspect is Colin Stetson's disturbingly grim musical score bleeding into all the channels, exhibiting an extensive mid-range with sharp definition and fidelity in the instrumentation. Ironically filling the room with warmth and an impressive sense of presence, background activity smoothly moves across the three front channels effortlessly, generating a highly-engaging and spacious soundstage. At the same time, the dialogue is extraordinarily clear and precise with superb intonation in every dramatic line and sudden burst of hysterics. Most surprising is a robust and occasionally forceful low-end that energizes the room with a subtle ultra-low activity, providing certain visuals with an uneasy, menacing feeling. (Audio Rating: 92/100)

Writer-director Ari Aster makes his feature-length directorial debut in Hereditary, an exceptionally masterful horror film demonstrating Aster as a highly promising talent. Starring Toni Collette in arguably the greatest performance of her career, the story of a family teetering on the brink of insanity after a tragic loss is ultimately a drama at heart immersed in a palpably-thick atmosphere of apprehension and dread that slowly unfolds to a spine-chilling conclusion. The nightmarish family tragedy haunts Blu-ray with a stunning video presentation and creepily immersive DTS-HD MA soundtrack. Although supplements are disappointingly lacking, the overall package is Recommended for passionately dedicated horror-hounds.

Sale Price 5.5
List Price 14.99
Buy Now
3rd Party 49.99
In Stock.
See what people are saying about this story or others
See Comments in Forum
Previous Next
Pre-Orders
Tomorrow's latest releases