World on a Wire

Overview - World on a Wire is a gloriously paranoid, boundlessly inventive take on the future from German wunderkind Rainer Werner Fassbinder. With dashes of Stanley Kubrick, Kurt Vonnegut, and Philip K. Dick, as well as a flavor entirely his own, Fassbinder tells the noir-spiked tale of a reluctant action hero, Fred Stiller (Klaus Lowitsch), a cybernetics engineer who uncovers a massive corporate conspiracy. At risk? (Virtual) reality as we know it. Originally made for German television, this recently rediscovered, three-and-a-half-hour labyrinth is a satiric and surreal look at the weird world of tomorrow from one of cinema’s kinkiest geniuses.
OVERALL
Highly Recommended

Fueled by a combination of curiosity and hubris, mankind often creates in its own image. Throughout the eons we have reconstructed our own visage, giving form to homuncular echoes, molded of clay or stone, strung together in wood or plastic. The digital age has given us a new medium to placate this age-old desire, and now the human model can be reduced to nothing more than ones and zeroes, to flashing pixels ignited by circuits and wires. Even more, we are no longer limited to mere appearances alone, and intelligence itself can be artificially assembled, sparking an uneasy glint behind electronic eyes. And for what purpose do we engender these replicas, these simulations? Surely to study, to learn, to better understand our own mysteries -- but, like always, these lofty goals only paint part of the picture. The harsh truth is, despite our many noble aspirations, at the end of the day, sometimes we just want to watch the puppets dance. Rainer Werner Fassbinder's 'World on a Wire' presents such a scenario, blending heady science fiction concepts with film noir influenced paranoia. Through a striking visual aesthetic, a slow burn pace, and deep thematic quandaries, the movie contemplates the very nature of reality, cementing a well deserved spot among cinema's greatest sci-fi achievements.

Originally produced for German television, the film is divided into two parts that collectively serve as a three and a half hour adaptation of Daniel F. Galouye's novel 'Simulacron-3' (which was also the basis for the far inferior 'The Thirteenth Floor'). The story focuses on a new technology that enables scientists to construct a virtual simulation of reality, complete with digital human beings dubbed "identity units." When the project's original director dies under mysterious circumstances, engineer Fred Stiller (Klaus Löwitsch) is brought on board as his replacement. Slowly but surely, Stiller uncovers a potential conspiracy within the cooperation. As his antagonists attempt to thwart his investigation, Stiller is ultimately confronted with a startling secret that could unravel the very fabric of reality.

Echoing Jean-Luc Godard's 'Alphaville,' the plot fuses science fiction with classic film noir sensibilities. The slow building narrative follows Stiller as he becomes a reluctant, cynical hero, cut from the same world weary cloth as many traditional hard-boiled detectives. At times it seems like the whole world is against him, and as certain revelations are made the character's sanity slowly unravels, adding multiple levels of conflict and drama to the proceedings. Thankfully, Klaus Löwitsch handles the role brilliantly, mixing just the right amount of brooding detachment and genuine heart. Of course, no film noir could complete without a proper femme fatale, and 'World on a Wire' certainly delivers with a pair of dangerously beautiful women, Barbara Valentin and Mascha Rabben. Both actresses lend a vague, ambiguous air to their performances, keeping their true motivations hidden. In fact, almost all of the acting features an odd, slightly affected quality with terse, uneasy dialogue, helping to create an uncomfortable, eccentric mood throughout.

As the mystery gradually unfolds, the twisting plot weaves a thought provoking examination of identity, control, and reality. The science fiction aspects of the story are handled delicately in a stripped-down, low-key manner. Eschewing flashy spectacle, the futuristic technology is simply used as a means to explore various, complicated themes dealing with the consequences of playing God. The central question at the heart of the film ponders the nature of existence itself, musing on the legitimacy of virtual souls. Though the pace can be on the slow side, the second part ramps up the excitement considerably, using the philosophical content to fuel entertaining suspense and drama. Unfortunately, however, the source material has been so influential on the world of science fiction since its publication in 1964, that many twists are obvious before they're officially unveiled within the narrative. Still, knowing what's coming doesn't really detract much from the experience, as the director's unique take on the material offers an often fascinating ride.

Fassbinder employs an almost Kubrick-esque visual aesthetic marked by slow moving, artfully composed shots. Furthering the film's emphasis on paranoia, the director often creates a voyeuristic mood, frequently framing shots in partially obstructed compositions that keep characters at a slight distance while maintaining an impeccable sense of balance. Quick zooms and pullouts reinforce dramatic tension and various deliberately measured tracking shots create an eerie, artificial atmosphere. In many scenes, the camera will constantly move about the space, motioning away from and then back toward actors while finding new objects and characters to focus on throughout the reframing. Mirrors play a huge part in the director's mise-en-scene as well, resulting in some very impressive, complicated set ups that use reflections to enhance subtext. Several sequences will end with the camera lingering on seemingly unimportant background characters, emphasizing their ambiguous glances and vacant stares. This helps to further a constant air of suspicion and mistrust, and as certain plot points are eventually revealed, these forced, unnatural expressions could even be interpreted as having narrative significance.

Like puppets on a string, 'World on a Wire' presents an entire reality tethered to a cord, subjected to the petty whims of its creators. At the mere flip of a switch they can make their "identity units" scurry like ants under a magnifying glass, like rats in a maze -- and it can't be seen as cruelty, because they're not real -- are they? As worlds within worlds within worlds take shape in an infinitely collapsing and expanding kaleidoscope of universes, this question forever lingers, forever remains at the forefront of the characters' and audience's minds. The movie's ambiguous ending wisely avoids easy answers, but its last uttered words speak volumes. Though mostly unseen for decades, Fassbinder's masterpiece predates and effectively anticipates more recent efforts like 'The Matrix,' 'Dark City,' 'Blade Runner,' 'eXistenZ,' and 'Inception.' For fans of those films and slower, contemplative science fiction like '2001: A Space Odyssey,' and 'Solaris,' this recently rediscovered gem should be a real treat.

Criterion presents 'World on a Wire' in their standard clear case with spine number 598. Both parts of the movie can be viewed individually or together. The BD-50 region A disc comes packaged with a booklet featuring an essay by critic Ed Halter. 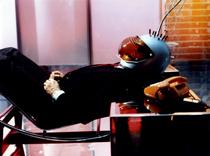 The movie is provided with a 1080p/AVC MPEG-4 transfer in the 1.33:1 aspect ratio. Supervised by the original cinematographer and free of any unnecessary digital manipulation, this is a very strong and authentic transfer.

The source print is in very good shape but there are some minor specks, hairs, and vertical lines visible from time to time. In the included special features it's revealed that cinematographer Michael Ballhaus actually chose to keep most of these small imperfections, rather than artificially clean up the image. A moderate to heavy layer of natural film grain is also present throughout, giving the picture some rough texture. Though shot on 16mm, detail and dimension is quite good, showing off the filmmakers' impeccable eye for framing and the intricate noir influenced production design. With that said, facial features tend to look a bit soft. Colors are strong, occasionally veering toward a slightly oversaturated aesthetic that washes the screen in rich hues. For whatever reason, however, the opening scenes of Part 2 appear a little less vibrant and sharp than the rest of the presentation. Contrast is high with bright whites and inky blacks throughout.

The film's cinematography and production design are exceptional, and thankfully the digital transfer appears to accurately represent the director's intentions. Though the movie's 16mm roots do occasionally limit the amount of detail visible, the image still has great pop and some nice instances of depth.

The movie is presented with a German LPCM mono track and optional English subtitles. Though only one channel of audio, the mix is quite strong, enhancing the mood with interesting design choices.

Dialogue is crisp and clean throughout with a nice full-bodied quality. The sound design is deceptively simple with an almost minimalist approach. Classical music selections play out over scenes with wonderful fidelity, demonstrating pleasing range with no distortion. Various electronic effects are used periodically, creating an eerie, paranoid atmosphere. Bass activity is negligible but there is some minor low end during a few of the more exciting moments in Part 2. Some crackle and pop can be heard in the music during the film's credit sequences, and background hiss is audible during one scene set in the virtual world, but these anomalies are rare and don't hurt the presentation.

Like the visuals, the audio mix helps to enhance the story in interesting ways. Simple but potent, the track perfectly suits the content. 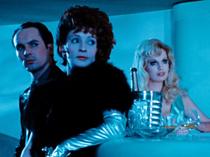 'World on a Wire' is everything great science fiction is supposed to be. Filled with heady, thought provoking questions, an involving mystery, and striking noir influenced visuals, the film leaves a lasting impression. Though a plethora of imitators has diminished some of the plot's impact, Fassbinder's artful approach to the material remains as potent as ever. The video and audio transfers are great, showing off the filmmakers' intricate cinematography and sound design. Supplements are on the slim side but offer a wealth of information on the movie's production. It's wonderful that obscure releases like this are still being rediscovered and rereleased, and this disc should be a real treat for any science fiction fan. Highly recommended.

Sale Price 24.44
Buy Now
3rd Party 16.95
In Stock.
See what people are saying about this story or others
See Comments in Forum
Previous Next
Pre-Orders
Tomorrow's latest releases