From Spanish-born filmmaker J.A. Bayona, Jurassic World: Fallen Kingdom is a serviceable and amusing-enough sequel, delivering an unexpectedly bland story that's tolerably fun. Chris Pratt and Bryce Dallas Howard return for another disastrous adventure through science run amok, littered with lovely screensaver images that ultimately fall flat. The dinos wreak havoc on Blu-ray with an outstanding, reference-quality DTS:X audio and 1080p video presentation that's sure to unleash chaos to home theaters. With a small but decently informative assortment of supplements, the overall package is Recommended for fans of the franchise who are not planning to make the jump to 4K any time soon.

(We have also reviewed the 4K Ultra HD Blu-ray.)

Early into Jurassic World: Fallen Kingdom, the direct follow-up to Colin Trevorrow's 2015 box-office juggernaut, Jeff Goldblum makes an appearance reprising his role as chaos theorist Dr. Ian Malcolm from Steven Spielberg's original and now-classic Jurassic Park. Testifying before a Senate hearing on whether the dinosaurs from the previous movie should be saved from an impending volcanic eruption, the mathematician suggests allowing the cloned animals to once again go extinct. He reasons humanity has done enough damage to the natural order of things and rescuing the animals will only lead to more harm. Of course, this being a franchise specifically about engineered dinosaurs and human interference, someone is bound not to heed the doctor's logical warning. And in a cinematic universe where characters are fully aware of the devastation and fatalities caused in the previous films, it's admittedly interesting, if also somewhat entertaining, to watch those characters ignore history and think they can avoid repeating the same mistakes.

The man leading the rescue mission from the bed-ridden comfort of his massively luxuriant estate is Sir Benjamin Lockwood (an underused James Cromwell), John Hammond's former business partner. Naturally, he hires Claire (Bryce Dallas Howard) and Owen (Chris Pratt) to return to the island they narrowly escaped a few years earlier because they possess a particular set of skills necessary for this ambitious operation — along with also thwarting the obvious evil plans introduced in the second act. Derek Connolly and Trevorrow's script reunites the two stars for this sequel in the most contrived manner that feels largely like a repeat of their first meeting. Claire is tasked by a superior to essentially fetch Owen, who is now building a cabin instead of working on his motorcycle. (You know, typical manly stuff.) Part of the fun in the first movie was the chemistry-driven banter of Howard and Pratt, which continues here for the most part, but it's not quite as amusing or comedic. As romantic leads, their charm feels shallow, and their predictable reunion is out of convenience. 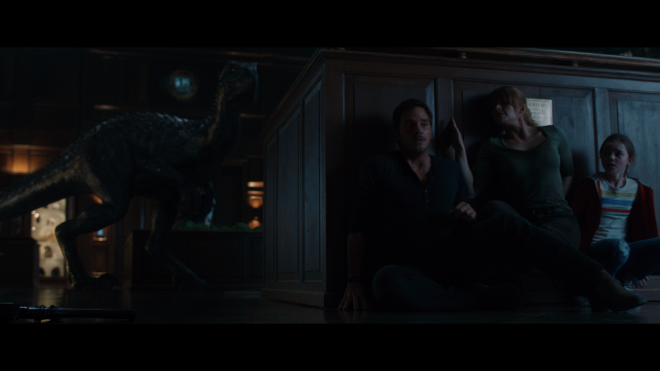 Perhaps, it has something to do with both characters being preoccupied with more pressing issues, such as the seasoned, trophy-collecting mercenary Ken Wheatley (Ted Levine) gathering the animals for more nefarious reasons. Or in the case of Owen, Pratt is distracted with practicing his manly glare, staring at others fixedly as though looking off into the distance. Whatever the case may be, the plot tries to ratchet the suspense and urgency as though the race against a massive volcano eruption were not enough. Now, our would-be heroes have to combat corporate greed, turning this production into a blend of The Lost World and Jurassic Park III. The protagonists are deceived into returning to the island, and the dinosaurs are again brought to California where they expectedly wreak havoc. Ironically, the merger plays out much better in this movie than in those aforementioned two, but Lockwood's granddaughter Maisie (Isabella Sermon) and Eli Mills (Rafe Spall) have much to do with that, providing some well-earned dramatic tension going into the film's second half.

These few positives, however, are not exactly meant to suggest Jurassic World: Fallen Kingdom is a great film, but rather, it's a serviceable follow-up that's on par with its predecessor. Director J.A. Bayona does well behind the camera, balancing the comedy with the action — of which there is plenty of, to be sure — and turning an unexpectedly bland story into tolerably fun, something that's better than the sequels of the original trilogy and a good addition to the overall franchise. Unfortunately, such soft, middling praise comes with some reservations, seeing as how the massive production comes from the same filmmaker as The Orphanage and A Monster Calls. Working with long-time collaborator and cinematographer Óscar Faura, Bayona seems so committed on delivering stunning visuals that he forgot to make a suspenseful movie or do something worthwhile with the overarching theme, littering the screen with lovely screensaver images that ultimately fall flat and supplying stunning, ear-deafening eye-candy that fails to captivate.

Universal Studios Home Entertainment brings Jurassic World: Fallen Kingdom to Blu-ray as a two-disc combo pack with a code for a Digital Copy. The Region Free, BD50 disc sits comfortably opposite a DVD-9, and both come inside a blue, eco-elite case with a shiny, glossy slipcover. After several skippable trailers, viewers are taken to a static menu with music.

The endangered dinos wreak havoc on Blu-ray with a stunningly gorgeous 1080p/AVC MPEG-4 encode, turning the arguably bland story, at least, into entertaining eye candy. Shot entirely on the Arri Alexa 65 digital camera system, the freshly-minted transfer is endlessly razor-sharp and near flawless, revealing every pore, wrinkle, and blemish in the face of the cast, especially during close-ups. Each blade of grass and leaf is distinct from a distance, and viewers can make out the rough, ragged bark of the trees while the tiniest imperfection and piece of wreckage of the dilapidated park is plainly visible. The stitching and threading in the clothing, the thick nylon belts and the canvas covering of the trucks are very well-defined, even during the fast-paced action. In fact, little fragments of debris and rubble remain discrete and striking at all times, especially during the volcanic eruption, and the seamless mix of CGI and animatronics is extraordinarily impressive, showing every fine line, fold, and furrow on the jagged, scarred bodies of the creatures.

Faithful to the stylized cinematography of Óscar Faura, the presentation also boasts spot-on contrast with brilliant, pitch-perfect whites, giving the many screensaver moments a spectacular picturesque quality. Exterior scenes on the island are littered with beautiful scenic views where the individual creases of fluffy clouds are exposed and the sunshine glows with warmth. Brightness levels could arguably be a tad stronger, most notably in those aforementioned daylight sequences. However, on the whole, blacks are inky rich and luxurious, particularly during the more poorly-lit sequences where dark, stygian shadows penetrate deep into the screen while maintaining exceptional visibility of background details, providing the 2.39:1 image with a three-dimensional feel and a lovely cinematic appeal. The video is also awash in lush, sumptuous primaries, such as the vibrant, lively greens of the surrounding foliage, while secondary hues are varied and animated, like the spirited fiery oranges of the lava and the natural, lifelike facial complexions. (Video Rating: 96/100)

Dinosaurs stampede home theaters with a monstrously sensational, reference-quality DTS:X soundtrack that almost immediately — and quite literally — submerges viewers into this fantasy adventure world. Within the first few minutes, whether we're searching the underwater depths of the aquatic park or on land hacking the computer system, the room is filled with the sloshing and swashing noise of the small submarine all around or heavy rain droplets falling directly above the listening area. Later, when walking through the jungle park, the chirping of birds, the rustling of leaves in trees or the roaring echo from a dino flawlessly pan through the overheads and surrounds. In the final, climactic quarter, the movie really comes to life with various effects discretely traveling across the ceiling or circling from one side of the room to the other. Quieter, more dialogue-driven moments may not be quite as aggressive, but they nonetheless come with various subtle atmospherics that terrifically maintains an effective and highly satisfying hemispheric soundfield.

Keeping things awesomely engaging, many of those same ambient effects layer the visuals with plenty of background activity that fluidly move between the three front channels and to the top heights, generating a splendidly broad and spacious half-dome soundstage. The design delivers distinct clarity and superb definition in the mid-range, even during the loudest, ear-deafening moments, making every bone-crushing bite pop and snap with extraordinary detail. Again, the final climactic quarter is a fantastic demo-worthy moment where every scream, wail and thunderous roar is distinctly heard above the chaos without a hint of distortion while the dialogue remains intelligible throughout. Michael Giacchino's score exhibits a great deal of warmth and fidelity with excellent separation and definition in every note and between each instrument while lightly bleeding to the front overheads. Although not quite as aggressive or impressive as its predecessor, the low-end is nonetheless commanding with tremendous palpability and weight in the action and in every dino stomp, occasionally hitting as low 20Hz in a few spots (bass chart). (Audio Rating: 96/100)

From Spanish-born filmmaker J.A. Bayona, Jurassic World: Fallen Kingdom is a serviceable and amusing-enough sequel, delivering an unexpectedly bland story that's tolerably fun. Chris Pratt and Bryce Dallas Howard return for another disastrous adventure through science run amok, littered with lovely screensaver images that ultimately fall flat. The dinos wreak havoc on Blu-ray with an outstanding, reference-quality DTS:X audio and 1080p video presentation that's sure to unleash chaos to home theaters. With a small but decently informative assortment of supplements, the overall package is Recommended for fans of the franchise who are not planning to get a 4K display anytime soon.

Sale Price 7.5
List Price 19.98
Buy Now
3rd Party 39.99
In Stock.
See what people are saying about this story or others
See Comments in Forum
Previous Next
Pre-Orders
Tomorrow's latest releases