With Craig T. Nelson, Holly Hunter, Sarah Vowell and Samuel L. Jackson reprising their roles from the first movie, Disney/Pixar's Incredibles 2 is a delightfully jubilant and satisfying follow-up to the now-classic animation flick while touching on some poignant, understated themes about self-reliance. The Blu-ray saves the day with a gorgeously sumptuous video, an excellent DTS-HD MA presentation and a healthy assortment of supplements. The overall three-disc package is Recommended, sure to provide hours of enjoyment. (We have also reviewed the 4K Ultra HD Blu-ray.)

Picking up precisely where the first movie left off, Incredibles 2 is a delightfully jubilant and satisfying follow-up to Pixar's now-classic animation flick paralleling superheroes with middle age responsibilities. The end of the first movie seemed to suggest the end of a law that criminalized superheroes when the Incredibles family unite to battle the Underminer. However, the start of this sequel, which was written and directed by Brad Bird (The Iron Giant, Mission: Impossible – Ghost Protocol), quickly reminds audiences that Supers are still outlawed from performing any heroic acts, immediately setting the stage for the plot. On the one hand, this all feels familiar with our central heroes (Craig T. Nelson and Holly Hunter) once again combating an arguably unjust law and an apprehensive society. But on the other hand, Bird undermines these expectations with some challenging notions about modernity, taking them in interesting directions not commonly seen in a family animated film.

The most obvious of Bird's ambitious ideas is the story's villain, Screenslaver, a rather creepy and frightening personality whose deeper conceit and meaning are deliberately unmasked less than halfway into the story. Even from the character's "nowhere near subtle" name, it's clear Bird doesn't want moviegoers mistaking the baddy's intentions and symbolic role. The evildoer literally announces he's wreaking havoc throughout the city for the sole purpose of exposing society's dependency on digital technology and the endless number of screens everywhere. Further engrossing us, Bird expands on this when the mastermind behind Screenslaver is finally revealed, connecting it back to the view of outlawing superheroes and their effect on society, both the negative and positive. The grander picture is a concern for the overreliance on others and technology to solve one's problems, a mature concept kids rarely hear about let alone discuss with the adults in their lives. 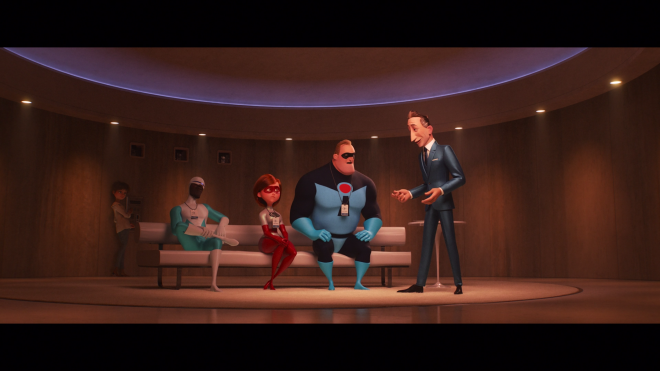 Even more fascinating is seeing these ideas explored in the Incredibles family, especially after Hunter's Elastigirl accepts a new job of super crimefighter for wealthy siblings Winston (Bob Odenkirk) and Evelyn (Catherine Keener) Deavor. In the first movie, Nelson's Mr. Incredible enjoyed the spotlight while Elastigirl hung her suit to become a super mom, and in the sequel, the roles are reversed, given Mr. Incredible a new perspective on being a stay-at-home parent. As super toddler Jack-Jack discovers a myriad of special abilities he can't control, which quickly and jokingly escalates into Mr. Incredible's greatest foe, Violet (Sarah Vowell) faces the sad realities of the teenage world and Dash (Huckleberry Milner) introduces our hero to Math. At the same time Elastigirl struggles with capturing Screenslaver, she grapples with her family no longer relying on her for their every need. Of course, none of this is as openly expressed as Screenslaver's goals, but it's all falls in line with the plot's overall theme, subtle as it may be.

It's also interesting to see how far we've come nearly fifteen years later since the first Incredibles movie where much of the attention was on Mr. Incredible's mid-life crisis while keeping to traditional gender roles. In Incredibles 2, the filmmakers shine the spotlight on the women of this universe, showing them just as capable as their male counterparts in every capacity while also subtly suggesting they perhaps can do it better. When Mr. Incredible fights bad guys, it's an utter display of mayhem and destruction, and even said bad guys, like the Underminer, leave a city in near ruins. Elastigirl, on the other hand, makes as little mess as possible and does a great deal of detective work to find the villain, thanks, in part, to genius inventor Evelyn and her countless array of innovative gadgets. It all makes for a surprisingly smart sequel with an understated theme masked by dazzling, ironically hypnotic action visuals and a terrific blend of humor guaranteed to satisfy the whole family.

Walt Disney Studios Home Entertainment brings Incredibles 2 to Blu-ray as a three-disc combo pack with a code for a Digital Copy. The Region Free, BD50 disc sits comfortably on the panel opposite another BD25 containing bonus material sitting atop a DVD-9 copy of the movie. All three are housed in a lightly embossed, glossy slipcover. At startup, the disc commences with skippable trailers before switching to a menu screen with the standard options, music playing in the background and full-motion clips.

Supers come out of hiding with a spectacular, reference-quality 1080p/AVC MPEG-4 encode, sure to be cheered and welcomed in every home theater. Overall definition and clarity are among the sharpest and most striking in the Pixar Blu-ray library, exposing every nook and cranny decorating the background. The stitching and fabric of costumes and clothing are striking with Evelyn's fuzzy sweaters and scarves, in particular, looking realistic at times. Individual strands of hair are razor-sharp, every bit of debris is distinct, and each crystal in Frozone's puff of snow can easily be separated from the rest. The marvelous picture quality is thanks to a superb, spot-on contrast, displaying pitch-perfect whites in every scene, from the ice shooting out of Frozone's hands and various articles of clothing to the bright glow of the many digital screens and the glare from the sun's rays.

Presented in its original 2.39:1 aspect ratio, the freshly-minted transfer also lands with inky-rich blacks, giving the hair of some characters a pitch-dark luster and the leather parts of superhero costumes a silky gloss. The video is bathed in satiny, midnight shadows that penetrate deep into the screen, providing the image with an elegant cinematic appeal and an awesome three-dimensionality quality. The best aspect of the sequel is, of course, the gorgeously vibrant color palette, lavishing the movie with sumptuously spirited cherry reds, which showers a majority of the HD presentation. Still, greens remain energetic and lively while blues range from cold sapphire and electrifying cobalt of the many monitor screens to icy arctic blue of Frozone's costume. But the most lavish colors come from the lush, splendid array of secondary hues, from the fuchsia pinks and rich magentas of the sky to fiery oranges and golden yellows of explosions.

All in all, this is arguably one Pixar's absolute best HD releases, but for an even grander visual experience, we recommend the 4K Ultra HD Blu-ray, which adds improved contrast and wider color gamut capabilities. (HD Video Rating: 100/100)

Given the last few Disney release of late, it would seem the House of Mouse is finally turning the tide in the audio department, but the change to offering audiophiles better sound quality is still small and modest. However, it's a change for the better nonetheless and a sign of good things to come in the future.

The DTS-HD Master Audio 7.1 soundtrack is not exactly the strong, aggressive type that perfectly matches the wild, chaotic action visuals, but the design comes with a variety of subtle effects that discretely pan between the surrounds. Occasionally, some atmospheric noises echo loudly enough across the channels to envelope the listening area, but it's not consistent enough to generate an immersive soundfield, coming with several chunks of silence throughout. The design's greatest strength, as is Disney's current custom, is across the fronts, filled with a variety of background activity and city commotion. The soundstage continuously feels broad and spacious with lots of convincing off-screen action moving fluidly between the three front channels while exhibiting superb definition and clarity in the mid-range, providing the music with outstanding warmth and fidelity. Dialogue is crystal-clear and precise amid the loudest segments. The low-end could arguably be stronger and more authoritative, but bass is nonetheless fairly commanding with plenty of rumbling weight and oomph to shake the couch and rattling the walls.

Overall, this 7.1 mix is a good deal of fun, but we found the 4K Ultra HD Blu-ray's Dolby Atmox a highly-satisfying improvement in comparison. (Audio Rating: 84/100)

Picking up precisely where the first movie left off, Incredibles 2 is a delightfully jubilant and satisfying follow-up to Disney/Pixar's now-classic animation flick. Craig T. Nelson, Holly Hunter, Sarah Vowell and Samuel L. Jackson reprise their roles for another adventure through mid-life adulthood where the parents switch roles and the Incredibles family learns about self-reliance. The Blu-ray arrives with a gorgeously sumptuous video and an excellent DTS-HD MA presentation. With a healthy, informative assortment of supplements, the overall three-disc package is recommended, sure to provide hours of enjoyment.

Sale Price 7.99
List Price 26.5
Buy Now
3rd Party 1.5
In Stock.
See what people are saying about this story or others
See Comments in Forum
Previous Next
Pre-Orders
Tomorrow's latest releases