Overview - A true story, based on devastating events, set in Huntington, West Virginia, about a small town steeped in the rich tradition of college football. For decades, players, coaches, fans and families have come together to cheer on Marshall University's "Thundering Herd." For this team and this community, Marshall football is more than just a sport, it's a way of life. But on a fateful night in 1970, while traveling back to Huntington after a game in North Carolina, 75 members of Marshall's football team and coaching staff were killed in a plane crash. As those left behind struggled to cope with the devastating loss of their loved ones, the grieving families found hope and strength in the leadership of Jack Lengyel, a young coach who was determined to rebuild Marshall's football program and in the process helped to heal a community.
OVERALL
Worth a Look 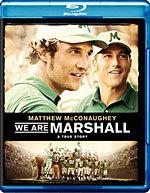 The latest in a long line of inspirational sports flicks to hit high-def, 'We Are Marshall' tells the true story of Huntington, West Virginia, a town struggling in the aftermath of an unthinkable tragedy.

After a freak plane crash killed much of Marshall University's beloved Thundering Herd football team, its coach and many friends and fans, Jack Lengyel (Matthew McConaughey) took the job no one wanted -- rebuilding the Marshall football program only months after the crash. Despite opposition from some in the town and the University's administration, Lengyel's dedication and compassionate coaching would defy the odds and guide this makeshift team of inexperienced players all the way to victory.

'We Are Marshall' is the kind of movie you either fall for, or you don't. I begrudgingly fell for it, even though I was fully aware that I was being shamelessly manipulated every step of the way. Director McG (of the 'Charlie's Angels' flicks) pours on the cliches so thick that I could only admire his sheer enthusiasm for melodramatic excess. In fact, in the end, 'We Are Marshall' is much like gorging on a dozen Twinkies and falling into sugar coma.

The weakest parts of the film are, ironically, those dealing with actual football. We've seen all these formulaic elements before in other sports flicks and 'We Are Marshall' ticks 'em off like an automated checklist -- from the usual disgraced coach drafted in to save an underdog team ('Hoosiers'), to the inexperienced blue collar everyman transformed into a superstar ('Invincible'), to the big rousing climax where our team will, of course, win the big game ('Remember the Titans,' 'The Longest Yard,' and every other sports flick ever made). Yet what elevates and separates 'We Are Marshall' from most of its brethren is that the script (by newcomer Jamie Linden) balances this rote narrative with a strong eye for the period, and the mores and manners of small town life. It creates characters we can identify with and lets us spend enough time with them to care.

Interestingly, the McConaughey character is actually the film's least interesting character because he's portayed as such an obvious, iconic do-gooder. Drawn with much more complexity are the film's cross-section of survivors and friends, who together form a multi-faceted portrait of grief. 'Lost's Matthew Fox finally gets a strong role as guilt-ridden assistant coach Red Dawson, who was supposed to be on the plane but wasn't, while the underrated Kate Mara ('Brokeback Mountain,' 'Shooter') shines as the devastated girlfriend of one of the deceased players. And for once, the token African-American player, Nate (Anthony Mackie) is not turned into a martyr, but rather a character integral to the fabric of the story.

'We Are Marshall' arguably manages to strike such a strong chord because it really isn't a sports movie. The point isn't whether Marshall eventually wins or loses, but rather how a community can, with compassion and (yes, I'm going to say it) team spirit, find the strength to move on -- even after all hope seems lost. If 'We Are Marshall' isn't entirely successful either as a football movie or as a truly insightful human drama, it's only because the confines of the genre have become so rigid that there's precious little leeway to create something original. Yet with fine performances and passionate (if over-the-top) direction, 'We Are Marshall' offers just enough that is fresh to make it worth seeing -- and damn you if you won't need a box of tissues handy by the time its over. 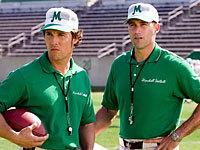 Sporting the same 1080p/VC-1 encode as its HD DVD counterpart, this Blu-ray combo edition of 'We Are Marshall' features another one of those transfers where the film's stylized post-production often interferes with detail and realism to a point where the usual selling points of a high-def transfer are somewhat obscured. To be sure, this isn't bad high-def, but it's also far from the best I've seen.

Colors are quite robust, with specific colors in the palette weighted much more heavily than others. Yellows and greens are noticeably pumped up, while blues look tinted towards cyan. Though bleeding is not a major problem, there is some noise clearly visible on solid patches, and colors can be so intense that they smear slightly, adding softness to the image. The deep blacks also result in a slight crush that obscures fine detail in the shadows. Oddly, however, there are random shots that looked slightly washed out, as if my TV's brightness setting had suddenly jumped too high. Contrast is also quite hot, often rendering any fine texture in white areas lost in the bloom.

On the plus side, the image is so colorful and slick that it's undeniably eye-popping. Fleshtones are pleasing (if such a rich shade of orange it's hardly believable that real human beings could look like this). And I can't fault the cleanliness of the source, which is impeccable -- any dirt or grain has been completely eradicated. Major compression artifacts (such as macroblocking) are also absent.

Warner offers up a Dolby TrueHD 5.1 Surround track for 'We Are Marshall' on Blu-ray, and as with the video it's an identical encode with the HD DVD (in this case 48kHz/24-bit). A standard Dolby Digital 5.1 surround mix (640kbps) is also provided, along with a French 5.1 dub.

The TrueHD track is a lively, generally involving mix. The film's sound design makes full use the big football scenes as well as more intimate moments, providing both bombast and atmosphere. Surrounds are fully engaged throughout, with the rears enjoying excellent fidelity and clarity, as well as pinpoint accuracy of directed sounds and terrific imaging. Dynamics are superb, with ultra-tight low bass and excellent, spacious high-end. Dialogue is also expertly recorded and balanced, and I didn't miss a word. In short, 'We Are Marshall' is a perfect example of the kind of polished, top tier soundtrack you'd expect from a big-budget Hollywood movie. 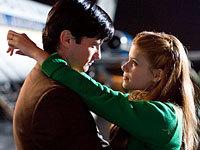 An anomaly in this age of the three-month release window, it's taken Warner nine months to release 'We Are Marshall' on home video. But while some took the long wait as an indication that perhaps the studio was cooking up something special for the film's concurrent debut on DVD, HD DVD and Blu-ray, alas that's not the case.

Instead, all we get is a single 35-minute featurette entitled "Legendary Coaches: How Coaches Overcome Adversity." Hosted by McG, the director is quite earnest (if a bit stiff -- it looks like he's reading right off a teleprompter) as he pays tribute to the passion and commitment of such famous coaches George Horton, Lute Olso and Bobby Bowden, as well as the lost players and coaches of Marshall. It's a nice featurette, and one clearly made with the best intentions, although fans hoping for any insight on the making of 'We Are Marshall' will be sorely disappointed.

The only other "extra" is a very cheesy advertisement for the state of West Virginia, called "Marshall Now," which actually plays before the film starts. It features Matthew McConaughey and David Straithairn stumping for the state as a "great place to visit."

Rounding out the slim pickings is the film's original Theatrical Trailer.

(Note that although "Legendary Coaches" gives me a readout of 1080p/MPEG-2 video, much of it looks like a 480 upconvert. The trailer and the West Virginia promo are plain old 480i/MPEG-2 video only, and windowboxed at 4:3 to boot.)

'We Are Marshall' is yet another well-meaning, inspirational sports movie based on a true story. Yes, it's cliched, and yes, it's shamelessly manipulative, but for whatever reason I found the gooey sentimentality a bit easier to swallow this time around. And good luck trying not to shed a tear by film's end.

Warner has put together another a nice effort for the film's Blu-ray debut, with an attractive transfer and nice Dolby TrueHD mix. The disc's one major disappointment is its meager supplemental package, which would seem to suggest that the studio may be cooking up a double dip or sometime in the future. Also a plus for Blu-ray supporters, this disc is $5 cheaper than the HD DVD (which is an HD DVD/DVD combo). In any case, if you're a fan of feel-good football movies, this one's certainly worth a look.

Sale Price 2.49
List Price 9.97
Buy Now
3rd Party 2.49
In Stock.
See what people are saying about this story or others
See Comments in Forum
Previous Next
Pre-Orders
Tomorrow's latest releases