The Merc with a Mouth returns in Deadpool 2 and takes aim right in the feels with another plot driven by an emotional core that places the irreverent mutant hero in a journey of self-discovery. But overlooking all that mopey, mawkish fluff, the sequel delivers more of the same cheeky, raunchy humor with the action visuals to match while also feeling wholly original. Deadpool unleashes his hot load of teenage angst on Blu-ray with a fantastic, near-reference HD video and an outstanding, demo-worthy DTS-HD presentation. Packing a satisfying sack of supplemental material, Deadpool's hefty package is Highly Recommended for the whole family.

The biggest surprise of Deadpool 2 is that it even exists at all. The first movie, based on the Marvel comics, was a dicey venture for a major Hollywood studio, releasing an R-rated superhero movie at a time when the subgenre continues to be highly profitable with families. Despite the excited anticipation from comic book fans everywhere, the raunchy irreverence of the title character, knavishly and fittingly nicknamed the Merc with a Mouth, had the odds stacked against him, especially after his first screen appearance practically neutered him and Ryan Reynolds later starred in a disastrous adaptation of another comic hero. But to everyone's amazement, the gamble paid off at the box office, making a sequel pretty much inevitable. Although some minor changes to the character toned down his other, potentially-lewd and gorily-obscene behavior, the movie perfectly captured the salacious, derisive spirit of the comics, turning Deadpool into an overnight cultural phenomenon.

Picking up two years after the events of the first movie, this direct follow-up sees Wade Wilson (Reynolds) turning his mutant powers into a career, a mercenary for hire killing bad guys. But a brief flashback before attempting suicide reveals a failed assassination causing a chain of events that have him reconsidering his life choices — an unexpected tragedy arguably considered a spoiler, but I must bite my lip at all costs. This poignant plot element becomes a significant driving force behind the story, similar to its predecessor, largely responsible for the attractive charm of both films. The unforeseen drama allows Reynolds the freedom to do what he does best — acting the fool amid a personal crisis, awesomely balancing the comedy with just enough of a serious tone to elevate the material. The actor's natural cheeky sarcasm is a perfect match for the character's cynical sass, which here, blatantly guards against his softer, gooier side, one that only his girlfriend Vanessa (Morena Baccarin) managed to bring out of him. But before becoming a complete moping sad-sack, he's recruited by the X-Men. 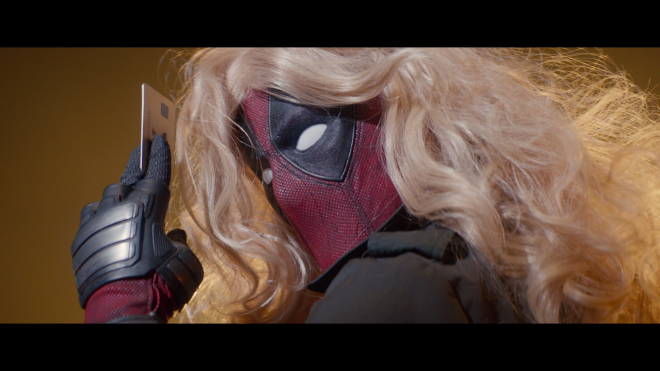 Technically, he's more like forced to the X-Mansion to lick his wounds and rediscover a sense of purpose by joining Colossus (Stefan Kapi?i?) and Negasonic Teenage Warhead (Brianna Hildebrand) on recruiting missions. One such assignment establishes the film's central conflict when placed into a battle of wits with the young hot-headed, pyrokinetic Russell (Julian Dennison), a terrifically memorable scene that nicely couples Deadpool's own personal strife while sporting a nifty trainee outfit. And again, this is ultimately the production's magical allure, quickly undermining its own seriousness with an unpredictable mockery. We know exactly where their relationship will go because it's a familiar trope, yet by scoffing at itself, audiences are left in suspense of how it all eventually connects. Josh Brolin's Cable, a time-traveling cybernetic soldier from the future hell-bent on killing the temperamental Russell, further complicates matters with his own personal agenda and terrifically adds to the plot's emotional force with his sourpuss attitude and a charred Teddy bear dangling from his belt.

Of course, after the success of the first movie setting up certain expectations, no one is really walking into Deadpool 2 craving all this mawkish histrionics and friggin' schmaltziness. We're in this for the offensive crass and absurd action, and the sequel definitely delivers a full load at the audiences, reaching a hilarious climax that guarantees everyone will walk away completely satisfied. For comic fans, Deadpool organizing his own superhero team he calls the X-Force is perhaps the film's highlight, especially when his good intentions end in catastrophe, serving as a hilarious wry commentary on each of the characters. The über-lucky mercenary Domino (a wonderful Zazie Beetz) is the standout, however, explaining her mutant abilities as fortune simply favoring her. When seeing her in action, director David Leitch (John Wick, Atomic Blonde) is arguably at his most creative with several visually stunning moments that seamlessly blend with the rest of the production's absurdity. By film's end, audiences are left exhausted from laughter, making this sequel as equally surprising and satisfying as the first.

20th Century Fox Home Entertainment brings Deadpool 2 to Blu-ray as a two-disc combo pack dubbed the "Super Duper [email protected]%!#& Cut." The accompanying flyer is a code for a Digital HD Copy, which can be redeemed via FoxDigitalMovies, Movies Anywhere and VUDU. The 119-minute theatrical version and the 134-minute extended cut are spread between a pair of dual-layered Region A locked, BD50 discs with the first disc containing all the special features. The added fifteen minutes are a variety of extended sequences, like Deadpool's samurai fight in the bathhouse, or new never-before-seen scenes, like the different ways Deadpool tries to commit suicide.

Both are housed inside the standard blue, eco-elite keepcase on opposing panels and a glossy slipcover. At startup, both discs hilariously commence like a badly-aged VHS tape that's been recorded over a few times and in 4:3 aspect ratio while a-ha's "Take on Me" plays in the background. With full-motion clips and the usual options along the bottom, the effect lasts for about a minute before switching to a more traditional appearance in 16:9 aspect ratio.

Shot on a combination of digital cameras and traditional 35mm film, the freshly-minted transfer shows distinct, sharp clarity of the most minute aspects in the background. The tiniest piece of furniture and the unique features of each room is plainly visible in the distance, even during the many fast-paced action sequences. Some of the CG imagery, on the other hand, can look a tad less appealing and arguably shoddy, such as Domino's attack on the convoy. Nevertheless, the coarse, ridged fabric and stitching in Deadpool's uniform, is detailed, clearly showing the tiniest smudge, grime and scratch, while the smallest attribute and characteristic of Cable's cybernetic arm is exposed. Also, facial complexions are highly revealing with lifelike textures in the cast, and the even extensive makeup work has a realistic, very well-defined quality.

Presented in its original 2.39:1 aspect ratio, the presentation also parachutes in with inky-rich blacks and superb gradational details within the darkest shadows and gloomiest of scenes. The entire prison segment is a great, potentially demo-worthy example, providing the image with an appreciable three-dimensional quality. The contrast is noticeably and deliberately subdued, giving the sequel a gloomier, more grayish tone to match the plot's darker themes. Still, whites remain crisp and brilliant throughout. Jonathan Sela's teal-orange cinematography also produces a slightly muted palette, but primaries are animated and vibrant, particularly the energetic reds in blood and Deadpool's outfit. Secondary hues may not impress, but they're nonetheless accurate and full-bodied. (Video Rating: 92/100)

With a sharp tongue and cheeky attitude, raunchy sass has never sounded better than it does on this exceptional, reference-quality DTS-HD Master Audio 7.1 soundtrack. Nearly every scene is layered with a variety of ambient noises, from the commotion of city traffic and the crowded mutant prison to helicopters and planes flawlessly panning from the surrounds and into view. The debris from explosions or ricocheting bullets bounce between the sides and rears, convincingly falling all around the listening area and placing the viewer in the middle of the comedic thrills. Quieter sequences are also busy with various atmospherics, generating an outstandingly immersive 360° soundfield.

The front soundstage is continuously expansive and broad, as many of those same atmospherics travel between the three channels with excellent directionality. The mid-range exhibits marvelous, room-penetrating clarity and separation, displaying superb detailing and distinction in the loudest, ear-piercing segments as well as in the song selections and musical score. Amid the bumbling mayhem and blundering chaos, dialogue reproduction remains crisp and precise from beginning to end. A powerfully robust low-end not only delivers room-shaking oomph and impact to the action, but it also provides the music with awesome weight and presence, making this lossless mix a fantastic crowd pleasure. (Audio Rating: 96/100)

The Merc with a Mouth returns in Deadpool 2 and takes aim right in the feels with another plot driven by an emotional core that places the irreverent mutant hero in a journey of self-discovery. But overlooking all that mopey, mawkish fluff, the sequel delivers more of the same cheeky, raunchy humor with the action visuals to match while also feeling wholly original. Deadpool unleashes his hot load of teenage angst on Blu-ray with a fantastic video presentation and an awesome, reference-quality DTS-HD MA soundtrack. Packing a satisfying sack of supplemental material, Deadpool's hefty package is highly recommended for the whole family.

Sale Price 19.72
List Price 32.99
Buy Now
3rd Party 13.49
In Stock.
See what people are saying about this story or others
See Comments in Forum
Previous Next
Pre-Orders
Tomorrow's latest releases