Ten years in the making, Avengers: Infinity War arrives with all the weight, action, laughs, tears, and poignancy we could hope for, as celestial Titan, Thanos, hunts down the infinity stones so he can "bring balance to the universe" no matter the cost. The monumental but somewhat bloated production is a wildly entertaining feat, given the balancing act between the long list of characters involved, sure to leave audiences in tearful, anxious anticipation for next year's conclusion. The Blu-ray arrives with a stunning, reference-quality presentation and an excellent but somewhat lackluster DTS-HD MA 7.1 soundtrack. With a strong set of supplements to boot, the overall package is Recommended for devoted fans.

Avengers: Infinity War has to be the biggest motion picture event of recent memory, a massively ambitious production ten years in the making. It will go down as a formidable and somewhat exhaustive endeavor that tests casual fans' knowledge of the entire Marvel Cinematic Universe while pleasing the deeply loyal base with giddy enthusiasm. Eighteen entries to the franchise have basically been building up to this moment, and it absolutely feels that cumbersome and substantial, requiring some viewers to perhaps revisit the previous films prior to this undeniably bloated but surprisingly entertaining behemoth. Miraculously, directors Anthony and Joe Russo, coming off the last two Captain America movies, do a phenomenal balancing act juggling between a laundry list of characters without losing focus on the main objective: stopping a nihilist-obsessed Thanos (Josh Brolin) from realizing his catastrophic plan for the universe. Even more astounding and unexpected is a poignantly weighty plot guaranteed to engage audiences on an emotional level.

Picking up from a mid-credits sequence in Thor: Ragnarok, the film wastes no time shocking fans, as Brolin's Thanos begins inflecting his twisted form of justice. Within minutes, the alien Titan easily overpowers the powerful Thor (Chris Hemsworth), out-smarts the ingeniously clever Loki (Tom Hiddleston) and pummels the incredible Hulk (Mark Ruffalo) to the point of bruising the Green Goliath's ego for the remainder of the runtime — a running gag that's as equally funny as it is frustrating. The scene quickly establishes a morose and pessimistic tone that pervades the thrillingly grandiose action, and even the several comedic curveballs attempting to lighten the mood do so with a tense cynicism. Hemsworth carries over his jovial demeanor from his previous movie in a conversation with Rocket (Bradley Cooper) where the two continue suppressing their softer underbellies. It's a touching moment with lighthearted jabs exemplifying the filmmakers' goal throughout the series but feels even more significant here — the darkest, bleakest story of the franchise. 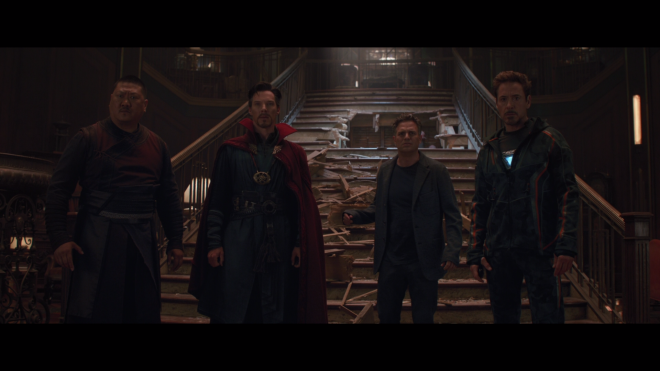 From a script by Christopher Markus and Stephen McFeely, the film's best aspect is the strange-bedfellows banter of the characters. Following in the story arcs created by the various sequels, Gamora's (Zoe Saldana) gravely dramatic pleas to Quill (Chris Pratt) are suddenly uninterrupted by weirder-than-usual Drax (Dave Bautista) believing himself a stealthy killer hiding in plain sight. In other parts of the universe, Banner's (Ruffalo) seven PhDs prove useless when operating the Hulkbuster armor suit, and a gawky, bumbling Spider-Man (Tom Holland) remains neurotically twitchy about his involvement as he's also unceremoniously welcomed into the Avengers. Meanwhile, egos are continuously clashing as everyone scrambles to fight the same problem from different perspectives and motives. Stark's (Robert Downey Jr.) tough-as-iron exterior, in particular, hilariously locks horns with Dr. Strange (Benedict Cumberbatch), but Pratt's over-confident and very much fragile Quill butting heads with Thor arguably provides the funniest moments.

Full of edge-of-your-seat spectacle, oozing with endless eye candy and wisecracking humor typical of the current superhero craze, Avengers: Infinity War is driven more by the emotional investment of each character, approaching Thanos's potentially cataclysmic threat differently because he's been at the center of numerous tragedies fueling the MCU. And like we've seen in the last two entries, including Sony's Spider-Man: Homecoming, the villain's motives are surprisingly more complex than a simple power-grab. Uninterested by greed, a lust to rule the galaxy or a desire to conquer all, the Titan is filled with regret and tragedy with a longing for balance, not only in the universe but in his personal life as well, one that takes shape in a callously logical plan that isn't entirely wrong. This leads to what is probably the most heartbreaking encounter of the entire film between Gamora and him, one of many heart-rending moments in a monumental production unlike anything we've seen before, astonishingly delivering the goods while leaving audiences in tears, eagerly anxious for next year's better-be-as-good conclusion.

Walt Disney Home Entertainment brings Avengers: Infinity War on Blu-ray as a two-disc combo pack with a flyer code for a Digital Copy. The Region Free, BD50 disc sits opposite a DVD-9 copy inside a blue, eco-cutout case with an embossed, glossy slipcover. After a couple skippable promos, the screen changes to the usual menu with options along the bottom of the screen, full-motion clips and music playing in the background.

The war for the universe erupts on Blu-ray with a gorgeous, demo-worthy 1080p/AVC MPEG-4 encode, boasting a lavish array of colors in every scene. Iron Man's suit and Dr. Strange's cape are a lush, vibrant red while the opulent greens of Wakanda's forest glow with life, and the electrifying blues of Thor's lightning bolts shock the screen with spirited intensity. Better still, the video is continuously oozing with an endless supply of purples, yellows, magentas and oranges, which is especially true and incredibly dramatic when Thanos wields the gauntlet, making his scenes some of the best moments for showing off one's display.

The freshly-minted transfer also arrives with spot-on contrast, providing excellent visibility into the far distance. Occasionally, whites can seem a tad too hot, most noticeably during the intensely colorful explosions, but on the whole, the picture is bursting with crisp and clean highlights. Black levels are rich and opulent with fantastic gradational differences in various areas, like Steve Rogers' Nomad outfit or his initial confrontation with Thanos's alien thugs in Scotland. In fact, shadow details are outstanding during the darkest, poorly-lit conversations, making the opening aboard Thor's destroyed ship and the scene in Nidavellir more great, reference-quality moments, especially with the sudden burst of colors.

Presented in its original 2.39:1 aspect ratio, the presentation comes with razor-sharp lines along buildings and the various costumes, exposing the tiniest imperfection and flaw. Every scrape and gash on Iron Man's suit is plainly visible, every crease and fold of Quill's jacket easy to make out, and the threading in Roger's suit observable even during the fast-paced action sequences. Viewers can see the small ornate details in Thanos's gauntlet, the intricate lines in Proxima Midnight's horns and all the loose wires and metallic pieces inside Ebony Maw's ship. Speaking of CG imagery, the work done on Thanos is utterly amazing in HD, exposing every crevice and pore of the Titan's deeply scarred face, and the facial complexions of the live-action stars are equally revealing with stunning life-like textures in the entire cast. (Video Rating: 98/100)

Following in the trend of Disney Blu-rays over the last year, the fight against Thanos comes to a screeching halt thanks to a generally enjoyable but still mildly disappointing DTS-HD Master Audio 7.1 soundtrack.

That disappointment comes mostly by way of the overall volume coming in a few decibels lower than usual, requiring some to crank up it for better enjoyment. But aside from that, there is also the issue with the track feeling like a front-heavy design where a majority of the explosive action seems confined and restrained to the three front channels. This leaves the surrounds pretty much in silence and failing to ever really create an immersive soundfield that would ideally match the exciting, fiery visuals. Occasionally, the random discrete effect travels to the other speakers or Alan Silvestri's score lightly bleeds to the sides, but this only manages to create a pleasing enough soundscape. A particular moment that comes to mind is Dr. Strange's rescue when Iron Man flies down behind Ebony Maw. In that moment, the sound of his rockets also coming down in the rears are weirdly placed in the front left channel, which is surprisingly distracting because it feels terribly out of place given the on-screen action.

Putting those arguably nitpicking issues aside, however, the overall design delivers a highly-engaging and satisfying soundstage, displaying excellent channel balance and separation from beginning to end. The movie is littered with lots of background activity and excellent off-screen movement, generating a splendidly broad and expansive soundscape. The mid-range exhibits outstanding clarity and definition with plenty of warmth and fidelity during the loudest, most bombastic segments, but, truth be told, this is not a particularly extensive or dynamic lossless mix, sometimes feeling a bit limited or as though the higher frequencies were deliberately clipped. Top priority is very plainly given to the vocals, heard clearly and distinctly amid the chaos and mayhem. The low-end, too, isn't quite as demanding or imposing as the visuals would suggest, but the mid-bass region is nonetheless adequate for providing weight and presence to the explosive action. (Audio Rating: 77/100)

Avengers: Infinity War debuts 4K Ultra HD Blu-ray with the same set of bonus features you'll find on the Blu-ray and Digital releases. Like most Disney releases, all supplements are located on the Blu-ray, but there's also a digital exclusive feature you'll need to access via your Digital Copy. Overall, this collection of special features is a bit on the light side; perhaps we'll get a more complete look behind-the-scenes following the release of Avengers 4.

— Hunt for the Mind Stone

— The Guardians Get Their Groove Back

Arguably the biggest motion picture even of recent memory, Avengers: Infinity War is filled with as much heart-rending tragedies as it layered with lighthearted comedy for making the film's more poignant aspects bearable. Keeping the monumental production from feeling too exhaustive and bloated is a somewhat complex plot that sees the central villain's callously logical plan driven by something deeper and more tragic, clashing the superheroes of the Marvel Cinematic Universe with their individual motives for fighting Thanos. On Blu-ray, the fight for the universe erupts with a gorgeous, demo-worthy video presentation, accompanied by an excellent but somewhat lackluster DTS-HD MA 7.1 soundtrack. Featuring a strong set of supplements worth checking out, the overall package is recommended for loyal fans of the Marvel Cinematic Universe.