Steven Spielberg's Ready Player One is a nostalgia-fueled ride through a virtual world made up almost entirely of pop-culture references, and the legendary filmmaker manages to make the whole spectacle into an entertaining piece of escapism. The movie plugs into the world of Blu-ray with a reference-quality HD presentation, a demo-worthy Dolby Atmos soundtrack, and a healthy set of supplements, making the overall package Recommended for fans and the curious.

Steven Spielberg's latest sci-fi blockbuster Ready Player One is a strange sort of creature — a complete hodgepodge of blatant allusions specifically intended for sparking the nostalgia feels, which it does with manipulative effectiveness. The whole thing is Christmas-wrapped in a tale about saving a virtual reality game, and the rest of the world by extension, called the OASIS from falling into the hands of a greedy corporation controlled by self-centered businessman Nolan Sorrento (Ben Mendelsohn). The high-concept plot is straightforward and uncomplicated, specially designed so as not to interfere with the smorgasbord of cultural references largely making up the film, which is, after all, the main attraction. Of course, the script, based on the book of the same name by Ernest Cline, introduces a few challenges and mild complexity in the way of reluctant, would-be hero Wade Watts (Tye Sheridan) and a band of resistance fighters, but ultimately, audiences book a passage to this adventure fantasy purely for the sake of wistful escapism.

And this is precisely what makes Spielberg's adaptation a strange and fascinating piece of entertainment. Wade explains in voiceover that many of the world's economies are in ruins, forcing much of an unemployed society survives in overcrowded ghettos or congested cities where trailer homes are piled on top of each other like skyscrapers. Rather than deal or face the problem, however, people ignore the sad, deplorable conditions of their reality by escaping into the OASIS where players can be whoever or whatever they want. And most participants, as far moviegoers can see, choose fanciful, almost futuristic looking characters. But the world is an amalgamation of a past they never personally experienced because it was long before their time, rendering the pop-culture references throughout meaningless outside of a fondness established by the game's creator James Halliday (Mark Rylance). After his death, his fondness has grown into society's obsession, attaching a sense of identity to a romanticized pastiche of an imaginary "carefree" time. 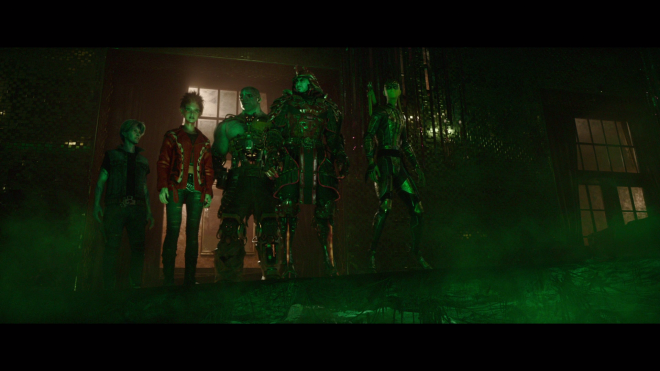 There is something strangely familiar and relatable to this dystopian future — beyond the obvious idea of escapism through social media and video games. It's the preoccupation with the pop-culture of the past, of a contemporary society failing to create something new and unique. And because of this fixation with pointless abstractions, the more problematic it becomes to live in the present, which admittedly, is the plot's central theme. What's really interesting though is how this theme also seems to be an indictment of us, an audience also seeking an escape from the troubled times of the present. Similar to Wade, we put on our rose-tinted glasses as to be whisked away to an imaginary world that feeds our nostalgic yearnings. For some, it's almost like a game where we're spending a majority of the time pointing out and guessing the references instead of a story about the game's creator hiding three difficult challenges in order to find a new owner. Funny enough, the plot is itself a subtle reference to Willy Wonka's efforts passing on his legacy.

Perhaps even more curious is Spielberg somehow making the whole spectacle entertaining rather than its downfall. The legendary filmmaker embraces the irony and even revels in it, a man partially responsible for creating much of what is seen on screen in the first place. His signature style for the grandiose and child-like wonderment are in full display, providing the production with a great deal of its charm though it tends to drag its feet in the middle of the second act. The subplot with love-interest Art3mis (Olivia Cooke) feels forced and distracting at times, but Spielberg eventually reigns it in and makes it fit into the storyline by the end. But again, this is not a tale to challenge viewers as much as simply enjoy the phantasmagoric visuals, to wallow in the momentary delight of escaping the real world with the imaginary. As Wade explains, it's when playing the classic Atari game Adventure, savor the pleasure in simply playing the game, wandering through the world its creator gifted participants, and Ready Player One is most definitely not about the absurdly predictable conclusion but about the fun of being immersed in pop-culture references of the past.

Warner Home Video plugs into Ready Player One on Blu-ray as a two-disc combo pack with a flyer code for a Digital Copy. The Region Free, BD50 disc sits opposite a DVD-9 copy inside a blue, eco-cutout case with lenticular slipcover. After a couple skippable promos, the screen changes to the usual menu with options along the bottom of the screen, full-motion clips and music playing in the background.

Spielberg's latest adventure fantasy escapes reality on Blu-ray with a totally tubular, reference-quality 1080p/AVC MPEG-4 encode that'll have owners feeling as though also entering the virtual world. Spot-on contrast supplies the picture with brilliantly crisp, pitch-perfect whites, making the brightest areas dazzles and illuminate the screen. During gameplay, blacks are continuously rich and inky with excellent gradational details and stygian shadows, providing the OASIS with a beautiful three-dimensional quality, but in the real world, brightness levels subtly dip, making reality tad gloomier by comparison. In fact, the transfer remains faithful to the creative intentions of the filmmakers, displaying a muted and lightly subdued color palette for making reality seem gloomier and dourer. However, the OASIS is showered with a dazzling array of richly-saturated primaries and a sumptuous assortment of animated neon hues that oozes through the screen, making for a spectacularly mesmerizing presentation.

Presented in its original 2.39:1 aspect ratio, the transfer is razor-sharp throughout with a couple softer moments that thankfully don't distract from its better aspects. Shot on a combination of digital cameras for the OASIS and traditional 35mm film for the real world, the presentation clearly reveals every crack, chip and rust stain along the walls of the cluttered, disheveled houses in the stacks, and the tiniest piece of furniture decorating Wade's gaudy retro home is plainly visible while every line, railing, and gaming equipment at the sterile, perfectly organized offices of IOI is distinct. Healthy facial complexions expose the tiniest blemish and wrinkle with lifelike textures while a tad on the paler side, which is an artistic choice, but there is a tad of rosiness in the cheeks. In the virtual world, individual hairs are sharp and move with extraordinary realism, the stitching and threading in the outfits are very well-defined, and every pebble, debris, and piece of litter on the ground is discrete. (Video Rating: 98/100)

Audiences plug into the chimera-like world of OASIS with the same demo-worthy Dolby Atmos soundtrack enjoyed on the 4K Ultra HD disc.

At the start, classic retro music spreads across the screen, filling the room with fantastic tunes while generating a wide and welcoming soundstage. Along with Alan Silvestri's nostalgia-driven score, the music also lightly bleeds into the top heights and sides, exhibiting distinct clarity and separation in the instrumentation while generating a highly-engaging and broad soundscape full of warmth and excellent fidelity. Background activity flawlessly moves from one side of the room to the other while maintaining precise, well-prioritized vocals, never drowned out by the crazy battles and the wildest visuals. Added to that, a powerful low-end provides palpable weight and presence to the explosions, an amusing rumble during the car race and a room-energizing grumble in the final fight for Planet Doom.

Displaying outstanding definition in the mid-range, the loudest, action-packed segments are layered with precise, detailed noises, like bits of debris and rubble, that move into the heights with fluid panning and rain down around the listener. Occasionally, vehicles also seem to fly overhead from behind and to the front before appearing on screen, and battles are riddled with a variety of video game effects discretely traveling in every which direction, creating an awesomely immersive hemispheric soundfield. Quieter scenes remain busy with various subtle atmospherics in the sides and rears, which from time to time spread into the ceiling channels as well. Of course, the best demo-worthy moments are the car race in early on, especially when King Kong swings between buildings, and the climactic war where Godzilla's roar reverberates everywhere, but my personal favorite is The Shining sequence where various understated noises create a terrifically spooky environment before growing scarily bombastic and grandiose. (Audio Rating: 96/100)

Game Changer: Cracking the Code (HD, 57 min): Hour-long EPK-like documentary made of cast & crew interviews touching on various aspects of the production with tons of BTS footage strewn throughout.

Effects for a Brave New World (HD, 25 min): Like the title implies, a piece dedicated to the visual effects, from concept art and the practical effects to the CG images and the use of motion capture.

Ernie & Tye's Excellent Adventure (HD, 12 min): The star and writer reunite in their hometown of Austin, Texas as they prepare for the premiere and reminisce on their time spent making the movie.

High Score: Endgame (HD, 10 min): Discussion on the music of Alan Silvestri, and his work marks his first collaboration with the legendary filmmaker.

Level Up: Sound for the Future (HD, 8 min): A closer look at the sound design and the amount of work that went into complementing the visuals.

The '80s: You're the Inspiration (HD, 6 min): Cast & crew talk about how the decade played an integral role in the movie and heavily influenced the story.

Steven Spielberg's latest sci-fi blockbuster Ready Player One is a strange sort of creature, driven mostly by an effort to make audiences feel nostalgic, which ironically, is also most of its attraction and charm, allowing viewers to revel in the visuals and savor the simple joy of it all. The Blu-ray plugs in with a reference HD presentation that makes the OASIS all the more mesmerizing and a demo-worthy Dolby Atmos soundtrack that brings the virtual reality to life. With a healthy set of supplements sure to keep owners further entertained, the overall package is Recommended for fans.

Sale Price 7.5
List Price 14.97
Buy Now
3rd Party 7.75
In Stock.
See what people are saying about this story or others
See Comments in Forum
Previous Next
Pre-Orders
Tomorrow's latest releases