Overview - A naive young man assumes a dead man's identity and finds himself embroiled in an underground world of power, violence, and chance where men gamble behind closed doors on the lives of other men.
OVERALL
A Rental at Best 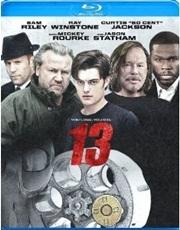 Although it comes with moments of nerve-wracking suspense in a few sequences, '13' also makes that unfortunate gaffe of giving away its ending in its title. In a movie where a deadly game of chance is its key feature, knowing the winner in advance diminishes a great deal of the story's tension and impact. Writer and director Géla Babluani, remaking his own French film '13 Tzameti,' tries to compensate with a surprise twist suggesting luck is a very fickle thing with a horrible sense of irony. Though little can be done in salvaging an unsatisfying conclusion, everything leading up to it makes for a decently entertaining and gripping low-budget dramatic thriller.

From the moment the movie's main character, a naïve but financially desperate young man named Vince (Sam Riley), discovers he's been assigned the normally unlucky and ominous number in order to participate in a ghastly version of Russian roulette, the jig is pretty much up and it happens early in the plot. The real challenge for filmmakers is in maintaining a viewer's interesting despite easily guessing the final outcome, which Babluani does fairly well for the most part. '13' isn't really about who wins or loses. It's about the thought that such appalling games could ever exist. It's also about the participants — their reasons for playing and the wealthy men taking advantage of them.

In having everything already laid out in the open, Babluani turns our attention on Vince and the events which lead to his taking part in the game. In need of money to cover dad's costly operation, he overhears a conversation about a job that pays well. When given the opportunity, he makes the foolish and gravely stupid decision to steal the instructions for the job. We follow Vince into the terrifying underworld of rich gamblers thirsty for the worst kind of thrill, and feel frightened with him of what takes place. This is the film's strongest area, and Riley ('Franklyn,' 'Control') does terrific in winning our affections. Problems arise when Babluani tries to also provide some background on a few select players.

There's nothing wrong in adding a couple more characters to thicken the plot, but the movie thrusts information at the audience in a way that's rather awkward and obligatory. The subplot surrounding the two British brothers, excellently played by Ray Winstone and Jason Stratham, is the most compelling and even leaves us wanting to learn more. The conversations between Mickey Rourke and Curtis "50 Cent" Jackson, however, bring nothing to the table and ultimately go nowhere. Flashback sequences are employed in a clichéd manner, troubled by the fact that the storyline ineptly goes from being about Vince to an ensemble cast of strangers brought together by unexpected circumstances.

This is where the Georgian filmmaker loses us, which is really rather shocking seeing as how he changed little in translating his own film for American audiences. Most of '13' runs through the same course as 2005's '13 Tzameti,' but it somehow fails to deliver the same impact. It's a shame really since the original crime thriller is a wonderfully exciting and taut feature-length debut. But now, it seems like the work of an indie amateur with only a few, promising sparks of talent thinly spread throughout.

Anchor Bay Entertainment releases '13' to Blu-ray on Region A locked, BD25 disc, inside a blue eco-amaray keepcase. At startup, the movie commences with a few trailers for other flicks in the company's catalog. Afterwards, we have the standard menu options with full-motion clips and music.

'13' arrives lock and loaded with a clean and good-looking 1080p/AVC MPEG-4 encode, though there's little that really stands out as memorable.

The 2.40:1 framed window displays excellent fine object details in most every scene, and the few poorly-lit sequences maintain strong visibility in the dark corners. Close-ups and mid-level shots reveal nicely-defined textures in the faces of actors and clothing while the old mansion shows its age on the walls and the woodwork.

The image also comes with a stylized appearance which goes along with the story's gloomy, dour subject matter. Contrast is noticeably toned down and low-key, creating a steely, almost black-and-white façade, but whites remain bright and crisp from beginning to end. Blacks fluctuate a tad but nothing very excessive or significant to ruin the picture quality, looking deep and stable for the most part. The color palette, however, is slightly affected with secondary hues taking the biggest hit while primaries maintain accuracy and consistency throughout.

Overall, the video makes an excellent debut to Blu-ray.

The intense dramatic thriller also fires away with quite the bang in this Dolby TrueHD soundtrack.

Much of the movie takes places in the front soundstage, displaying good channel separation and fidelity. Dynamic range is sharply rendered with great acoustical detailing and clarity. Low bass is appreciably powerful and responsive, providing each gunshot with force and weight. Dialogue reproduction is equally impressive, revealing small emotive changes in the voices of actors including Sam Riley's forced his American accent. Rear activity is mostly reserved for the few bits of action available, like the echo of gunshots or when players cock their pistols. Although the discrete effects appear seamless panning across the back speakers, they also seem rather gimmicky and forced.

All in all, the lossless mix provides an entertaining listen and does its job well.

Anchor Bay offers this Blu-ray edition of '13' as a standalone release without any special features.

Géla Babluani directs his own remake in '13,'which tells the tale of the participants in a terrifying game of chance — a ghastly, twisted version of Russian roulette. Starring Ray Winstone, Mickey Rourke, Jason Stratham, and Curtis Jackson, the story is supposed to follow Sam Riley's naïve character, but tries too hard to incorporate minor subplots into the mix. The film has its moments, but ultimately fails to deliver the overall impact it aims for. The Blu-ray arrives with a very good audio and video presentation, but offers nothing in the supplements area, making it at best a rental for anyone interested.

Sale Price 8.19
Buy Now
3rd Party 14.99
In Stock.
See what people are saying about this story or others
See Comments in Forum
Previous Next
Pre-Orders
Tomorrow's latest releases